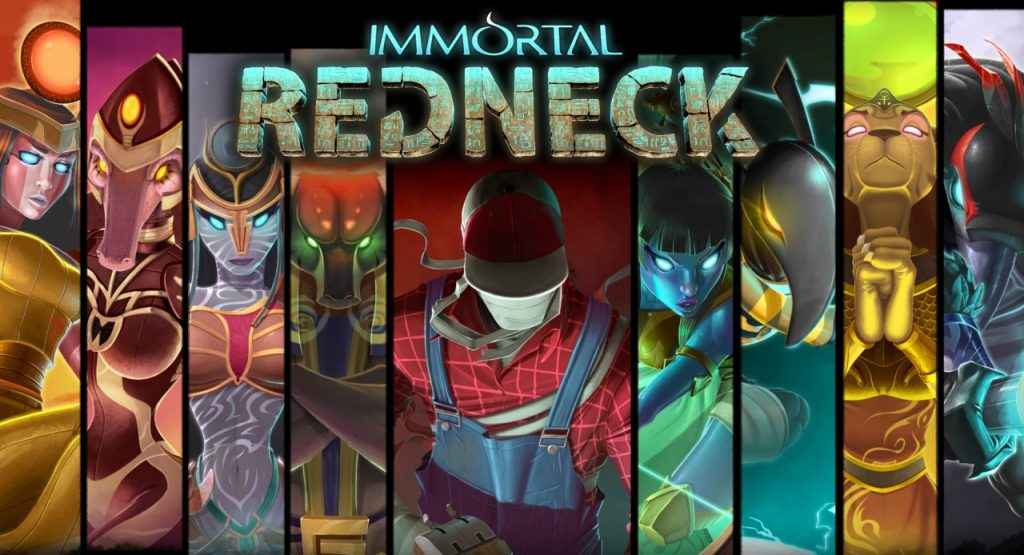 This arcade shooter from CremaGames does indeed feature a (rather unfunny) redneck who seemingly cannot be killed after being turned into a Mummy (because of course). A good thing it seems, as he’s got a ruddy great Egyptian pyramid full of strange beasties to shoot to pieces and they tend to overwhelm him eventually. So he must start again, albeit with some treasure to up his stats and abilities for the next run.

Yes, Immortal Redneck is a rouge-like arcade first-person shooter and holds many of the compelling aspects you’d expect from such a mixture. It’s fast-paced, rich in weapon variety, and features a tasty gameplay loop for the most part. It’s a colorful shooter, extremely cartoonish and chunky-looking. It’s easily one of the better uses of the Unity engine (an engine that is often used poorly on PS4) and runs pretty smoothly. Essential really, seeing as how quick and responsive it needs to be. It’s not spectacular, but it makes the action clear and understandable.

Immortal Redneck randomises the layout of each pyramid entered, as well as power-ups encountered. Each pyramid consists of a certain number of floors, with a random layout each time. Entering a new room sees the doors lock until all enemies or challenges found within it are vanquished. While you can get an idea of what sort of rooms hold what type of enemies, what doesn’t stay quite so stable is that enemies can randomly drop new weapons or scrolls at any point.

That scroll drop system is a good way to vary up the runs. Alongside enemy scroll drops, some rooms contain chests, which will also produce said scrolls. These scrolls contain game-changing modifiers, which will remain in effect until the player dies. While most of these scrolls are helpful, such as damage increase or infinite ammo, others are debuffs. These limit the player in some fashion. Be it via a speed decrease or weapons being locked.

You never know if it’ll be a helpful or harmful scroll, so there’s a element of risk and reward to the whole system. Gambling on a scroll can be the difference between a handful of coins or a treasure chest full of them. I found it to be a great addition to a fairly formulaic rouge-like template.

In Immortal Redneck, the eight Gods and Goddesses of Egyptian mythology represent different classes. Each has its own attribute bonuses, as well as passive and active abilities. There’s invention to some of these abilities, but mostly it’s a standard set of buffs and power ups to get you out of a scrape. The majority of these deities are unlocked by spending the coins you pick up on each run, and are accessed via branches of a literal skill tree.

In between runs, that gold earned from the Redneck’s previous life can be spent on skills (or a merchant once he is unlocked). Defeating a boss grants access to special tokens, which start the next pyramid as if that boss had just been defeated . A repeat of the last pyramid can also be requested, for a hefty fee, on the next run (a la Rogue Legacy). Any unspent gold is relinquished in sacrifice to the gods, in order to start another attempt at clearing a pyramid.

There’s a few dozen skills to unlock, and while opening up new classes is tempting, you fare better by upgrading your health and damage during your earliest hours with Immortal Redneck, because the game gets rather unforgiving with health drops whilst in the pyramid. What is most important about any shooter is how it handles. Immortal Redneck has a fine selection of weaponry, with each class having its own goofy over the top arsenal, but the majority of them just feel very much the same to use, so clear favourites are quickly discovered. Otherwise the speedy shooting is fairly enjoyable if a touch weightless at times. Solid, if not exactly exciting.

Immortal Redneck is an easy game to drop into for a half hour or so here and there, but it just does not have that compelling spark that drags you into deeper, longer sessions. There’s a decent amount of variety to it, sure, but not enough to last for the many, many hours you need to actually play to get the most out of it. The room and enemy design gets pretty samey after just an hour or two, and while that’s great for learning patterns and threat level, it means the end game is a bit less thrilling as a result.

Immortal Redneck works best as an occasional snack, or a palette cleanser, between heavier gaming meals. Playing for any length of time shows up its shortcomings, but in bite-sized pieces it's a good time. The game's humour is rank and dull, but it luckily doesn't detract from the rather pleasing colourful action the game provides.