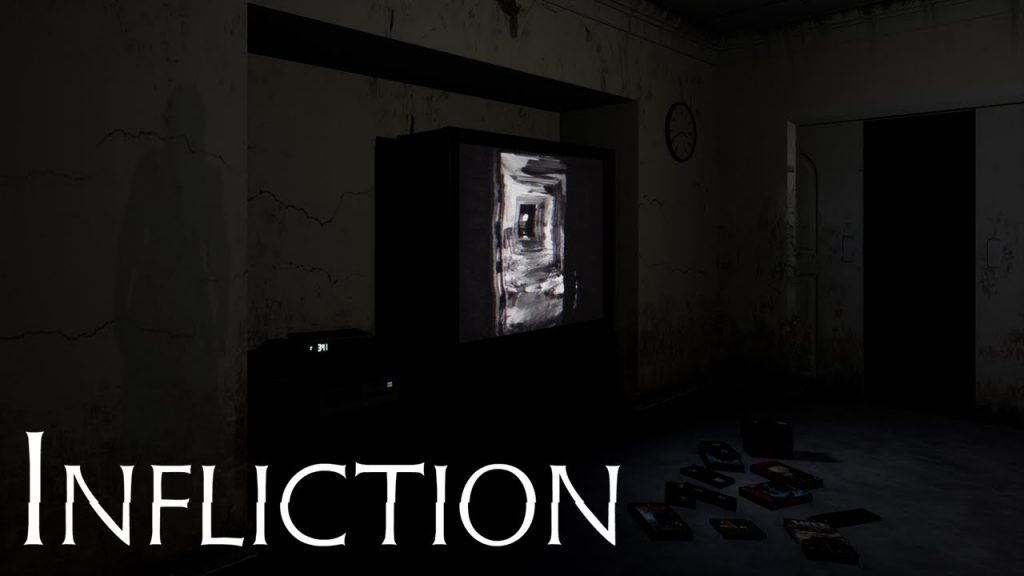 When it comes to horror, you have to nail the atmosphere. In my experience, I’ve always found that to be the most important aspect of any good horror. That is where Infliction succeeds most.

Unfortunately, it’s not without its problems, as the game has some technical issues that I ran into that I couldn’t ignore.

At its core, Infliction is a narrative-driven, walking simulator with light puzzle elements that sees the player inspecting items in a haunted house. The player character is tasked with returning to his home that is haunted by a vengeful spirit roaming the hallways. The game wears its inspirations on its sleeve. Whether that be P.T, Fatal Frame, Layers of Fear, or Gone Home. There is an admirable amount of detail, in that you can interact with pretty much everything in the environment.

My favourite element of the gameplay takes the form of a polaroid camera. Not unlike Fatal Frame where you can use it to spot things in the environment that you otherwise cannot see. It adds to the already unnerving nature of the game. Not only does it serve its purpose by helping build tension, but you can use it to stave off the ghost with its flash upon taking a photo. If that fails, you can always flick a light switch providing the spirit hasn’t removed the bulb.

The atmosphere is fantastic. Caustic Reality has done a truly great job here. It is really unsettling to wander the halls armed with nothing but a polaroid camera. The way the ghost creeps through the light and into the shadows is anxiety-inducing. However, the extreme close ups and high pitch screams are a bit overdone. In general, jump scares are difficult to pull off and that shows here. Sometimes they land and sometimes they don’t. It’s generally more disturbing when she’s roaming around, interacting with the environment or moving in a manner I can only liken to Samara from The Ring.

The environments sometimes shift and reality becomes distorted which is very similar to Layers of Fear. You’ll walk through a door and then turn 360 degrees only to see that door is gone. It’s used more sparingly in Infliction and comes as more of a surprise as a result. You’ll be moving the plot forward by completing fairly simple objectives that mostly include finding specific items.

The presentation sometimes looks a bit dated but it is forgivable given the limitations of a one-man development team. The indoor environments are good and look markedly better than the outside, but character models look a little off sometimes. The death animations are mostly well-executed (pun intended), but there’s a couple I noticed that looked a little janky.

Without revealing too much; the plot itself takes an interesting direction early on that kept me intrigued and wanting to know where it would go, especially given the discoveries you make up until that point. It comes off a little on the nose, but mostly works given the nature of the horror genre itself. The plot tackles some very real, very dark themes that aren’t tackled often enough in games or not in an appropriate way. I’m not sure it works all of the time here either, but it does make for a twisted story. The plot is sometimes delivered via radio news, journal scrawls (which is very typical of the genre), and other such memories that are tied to the items you inspect. Some of those journal scrawls in particular are cheesy, but there’s some solid voice acting that accompanies them.

Nightmarish Audio And An Artist’s Touch

That brings me to the sound design. For much of the game I had nothing but praise for its use of sound or lack thereof. I particularly liked what sounded like the unscrewing of a lightbulb. This seemed as though the ghost was doing this to disable you from using the light against her. The creeks of the floorboards, the white noise of a radio, and struggled breathing were nice touches too.

However, on a few occasions, the audio would cut out altogether after waking up in a different room and transitioning from a load screen. If I didn’t have subtitles on then I wouldn’t have known there was in fact dialogue in those moments. I had to fix the issue by closing the game and reopening it. This worked every time, except for the perhaps the most important of times. Towards the climax of the game I lost audio all together. Unfortunately, this completely broke the immersion for me in the game’s most pivotal moment. I reset it multiple times in an attempt to fix the issue but to no avail. I finished the game with no sound.

The playtime is roughly 2-5 hours with little replay value. The replay value that is there comes in the form of bonus features and a new game plus mode, which makes the antagonists AI more aggressive and has them appear more often. Elsewhere, there’s a chapter select mode, so you can get those trophies you may have missed for an easily attainable platinum trophy!

Amongst the bonus features, there is a gallery of artwork belonging to a character from the story. You can explore the gallery freely in the same way you do the main game. There’s a room which allows you to look over some deleted scenes and various promotional and placeholder art for the game. This is a really nice touch.

Despite the audio issues I had, especially towards the end and some other wobbly moments I noted, I mostly enjoyed Infliction. Unfortunately, those were issues I couldn’t overlook in the end as the ending wasn’t able to be experienced in the way I would have liked. Infliction Extended Cut is still an enjoyable horror title and an impressive feat from the efforts of one man. Hopefully they’ll release a patch to fix the issues I had with the games audio.

Infliction: Extended Cut is available for PS4 on February 25, 2020.

Infliction: Extended Cut is a solid horror experience that succeeds in its strong atmospheric design. However, it is marred with some severe audio issues that deeply affected the experience, particularly in the final act.