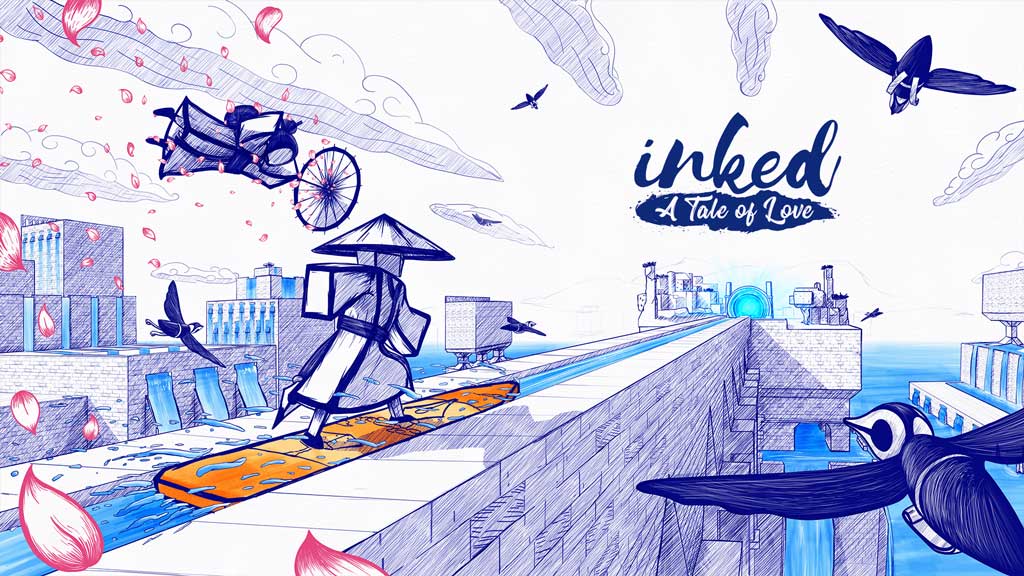 Inked A Tale Of Love PS4 Review Beautiful hand-drawn artwork as a basis of a game world has become more common recently as developers realise how organic imagery can be so immersive and alluring as an alterative to the latest platform’s attempt at realism or generic cartoon CGI. Croatian developers Somnium have taken visual inspiration from historic Asian art with their sparse use of colour and a toned down palette which combined with biro line drawings create a unique setting for this simple Japanese folk adventure.

Intertwined with the love story are the travails of the artist who observes and eventually interferes with the hero’s journey, like an omnipotent and malicious Terry Gilliam from his early days with Python. If this sketchy but artful outline has drawn you into this review then my (ball) point has successfully been made…

As the Nameless Hero of Inked, you guide your retired samurai warrior in search of his lost love Aiko, an artist who is troubled by the sick and injured animals in their world. She has set off alone to find the cause of the damage to the fauna, and our hero must solve puzzles across a diverse landscape in order to find and help her in her quest.

The journey is split into ten chapters with distinct landscapes and animals themed within, be it crumbling citadels, scorching deserts, swamps, icy tundra and a variety of others. Nine canvasses of Aiko’s art are hidden within each level for you to find, in between solving the numerous puzzles which hinder your progress to reach the end portal which transports you to the next level. 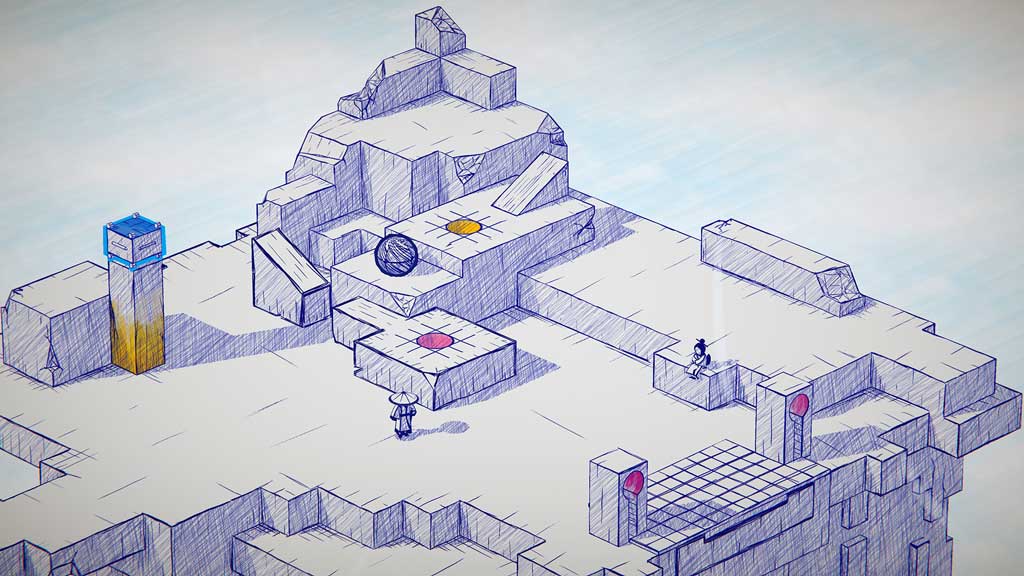 Using a forced isometric perspective which evokes a host of vintage adventure games harking all the way back to Ant Attack on the ZX Spectrum, our Hero’s special power is to manipulate a small selection of blocks, ramps, switches and balls within each ‘area’ which are all contained on the screen at the same time.

This mechanic of self contained puzzles enables them to be more accessible for those who struggle with anything too cerebral (my hand is up), and the learning curve is perfectly judged to introduce new elements and techniques to progress once the player is comfortable with the potential solution. That isn’t to say that some aren’t chin-scratchingly challenging, but a little thought and logic will usually lead you to solve what initially seems like an obtuse selection of blocks and ramps without tearing out any hair.

Later levels introduce the opportunity to burn wooden structures to reach inaccessible switches or areas, along with the ice levels which allow you to freeze and melt water in a similar fashion. Raising mechanical platforms and using steps and ramps are your only way of climbing as you are unable to jump, so this often simplifies the gameplay and dictates the layout of the levels in a way which is enjoyable and predictable.

The control system is the main niggle, as the Square button has been favoured over the Cross to select an item which you want to move, and on more than one occasion I found myself undoing some carefully prepared scaffolding as the button layout was anything but intuitive. Otherwise, there is little to fault on the gameplay unless you have an aversion to brain teasers which gently strain your cerebrum. 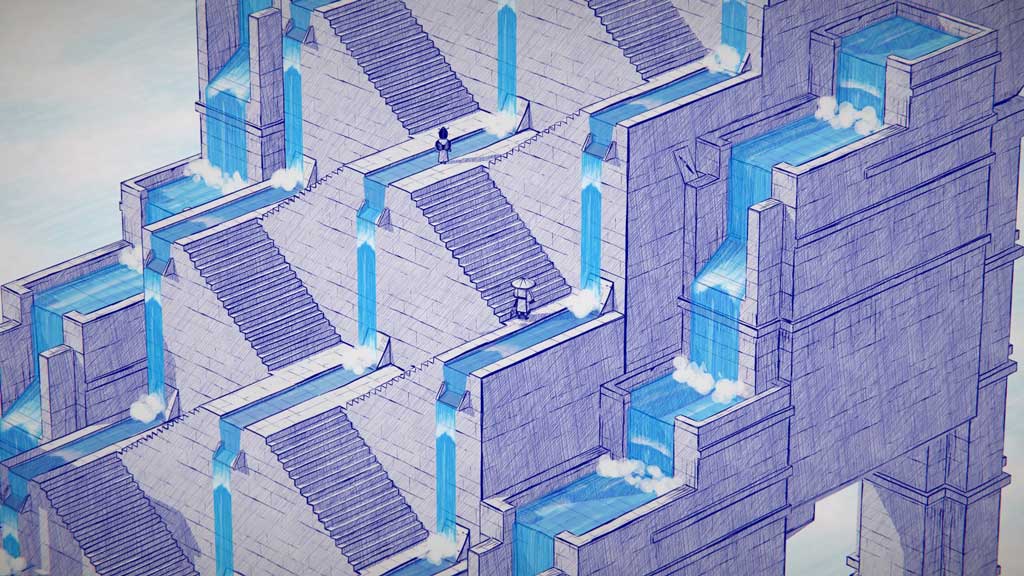 As the story moves on, Aiko remains fairly evasive but this keeps motivating our Hero to find her. The ‘fourth wall’ is soon broken when the hands of the artist begin to appear along with some still cut-scenes which reveal scenes from his life which influence his mental state. These start to have an effect on his behaviour and on how he treats his characters within the game, similarly twisting the story into something more emotional and complicated than at first it seemed. Breaking out of the immersive art style could have ruined the atmosphere (as per Assassin’s Creed‘s tedious modern day sections), but it works pretty well here as an original idea to intertwine the world of the artist within the folk story.

Of course, the USPs of Inked are the beautiful pen line drawings which not only make up a stunningly detailed isometric world, but also bring to life the two protagonists and the animals in their world, all of which are wonderfully animated. A subtle watercolour background is used behind the solid landscape and the animated parts of the world are equal in their exquisite detail to the rest of the characters. Sonically, the apt and subtle musical soundtrack is interspersed with some nice organic sound effects all of which complement the visuals very well. Between scenes, the American narrator’s voiceover is something of an acquired taste but fortunately it doesn’t impede too much on the charming Japanese atmosphere of the story. 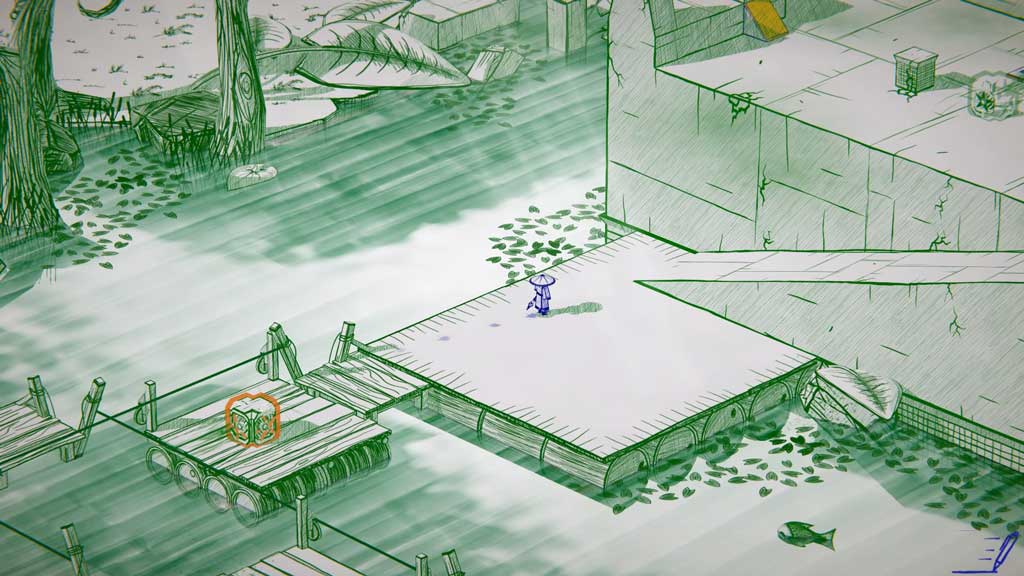 Quick on the draw

There are between 4-5 hours of gameplay in the story, and completists will wish to replay the game in order to collect all of the canvasses carefully concealed within each level. Considering the price point of the game, this is an ample amount of gameplay for casual gamers who enjoy relatively simple puzzles framed within a sublime hand-drawn world which deserves to be seen through to the emotional finale.

While the core gameplay breaks no new ground and is essentially quite antiquated, there is enough originality within the story and on display in the design to compensate for this. As a result, Inked A Tale of Love comes as a recommended purchase for lovers of design, puzzles and stories with emotional depth.

Inked A Tale Of Love is available now on PS4 / PS5

Simple but satisfying platform puzzles combined with some stunning hand drawn artwork make for a brief but emotional and entertaining adventure which dares to try something new.

Inked A Tale Of Love