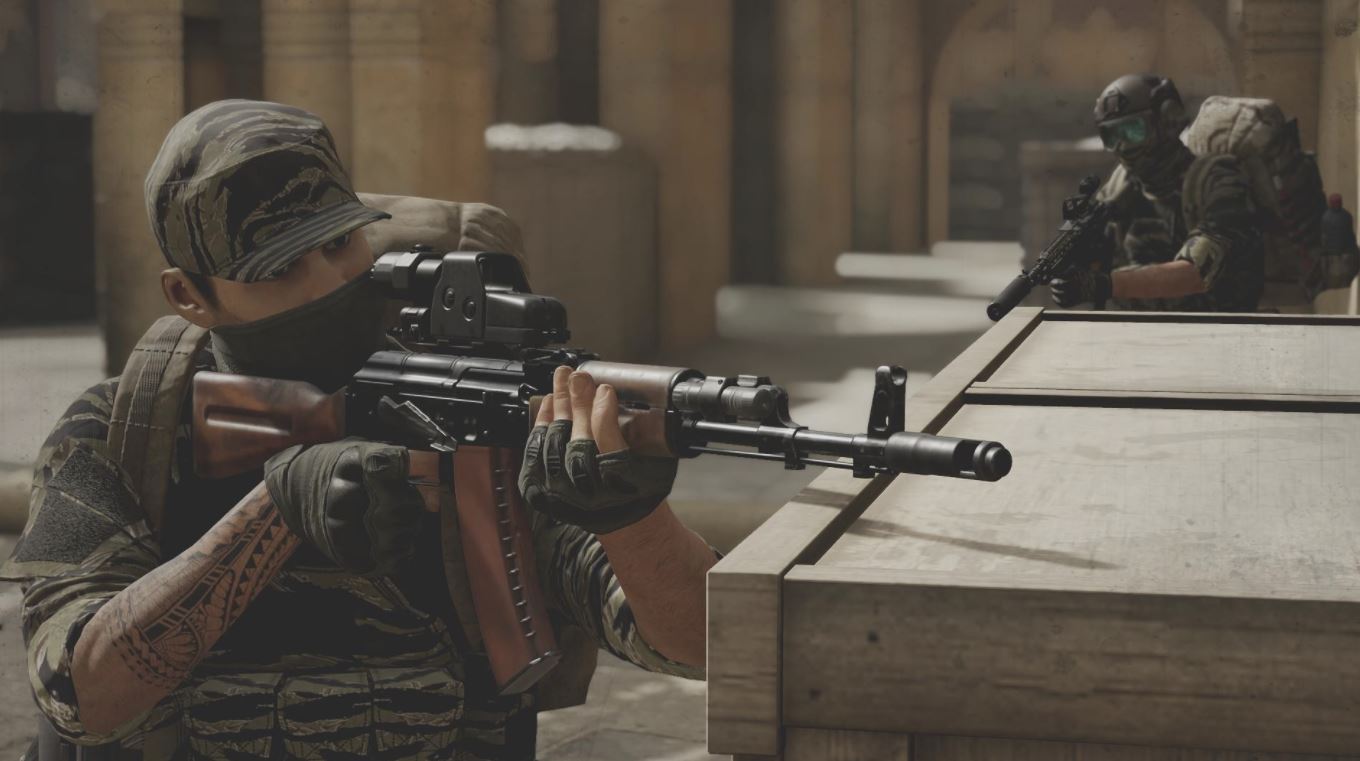 Insurgency: Sandstorm PS4 review. There’s something loud and simultaneously pin-drop terrifying about the modern day firefights that Insurgency: Sandstorm frequently plays host to which set it apart from its genre stablemates. Though Insurgency: Sandstorm bears a superficial similarity to the likes of Call of Duty and other such shooters that have enjoyed success in a contemporary theatre of war, developer New World Interactive has instead reared a much different beast that revels in nerve-shredding combat and precise close quarters firefighting like no other game.

Editors Note: Insurgency: Sandstorm was played on PlayStation 5 via backwards compatibility. This has resulted in improved performance that would not be available in the PS4 and PS4 Pro version of the game.

To be clear, Insurgency: Sandstorm doesn’t have the sort kind of cinematic, bombast-stuffed, single-player campaign that you’d associate with Call of Duty – so if you were looking to press ‘X’ to pay respects or command an attack dog to take down a helicopter gunship, you’re rather out of luck. Instead, Insurgency: Sandstorm is a much more grounded and streamlined affair that funnels the player into a series of confrontational modes that can be played with bots, other players or a mixture of both.

Certainly, the modes that are available in Insurgency: Sandstorm will prove familiar to most. A mixture of territorial capture, deathmatch and the sort of sector by sector conquering you might expect to see in something like Battlefield, Insurgency: Sandstorm lets players compete against each other, team up to take on cunning AI foes or play locally against a range of different bots. 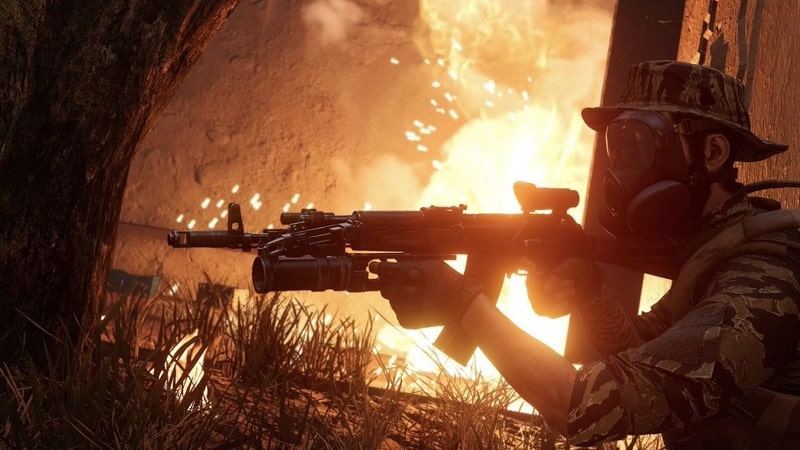 Though the modes might seem overly familiar to some, it’s really in the nitty gritty of the moment to moment gameplay that Insurgency: Sandstorm truly begins to shine. Quite simply, if you go running into *any* of the skirmishes encompassed within Insurgency: Sandstorm, you’re going to go down. Hard. It only takes a single bullet to send you (or your pals) six-feet under and so the game very early on let’s you know in extremely explicit terms that you need to be patient and tactical as well as a crack shot.

Likewise, every map in Insurgency: Sandstorm which liberally wears its Afghanistan/Iraq influences on its sleeves, feels like a real, nail-biting tactical sandbox where endless corners can be peered around and where routes to ingress and egress are painfully substantial. Quite simply, success in any of the modes in Insurgency: Sandstorm can only really be assured not just by your own hand, but by communicating and co-ordinating with the other folks on your team.

From flanking manoeuvres to setting up choke points and engaging in pincer move style attacks, pulling off a successful incursion into enemy territory feels deliriously satisfying and even better still, it’s super easy to learn these techniques and then implement them in combat to an often rewarding end. 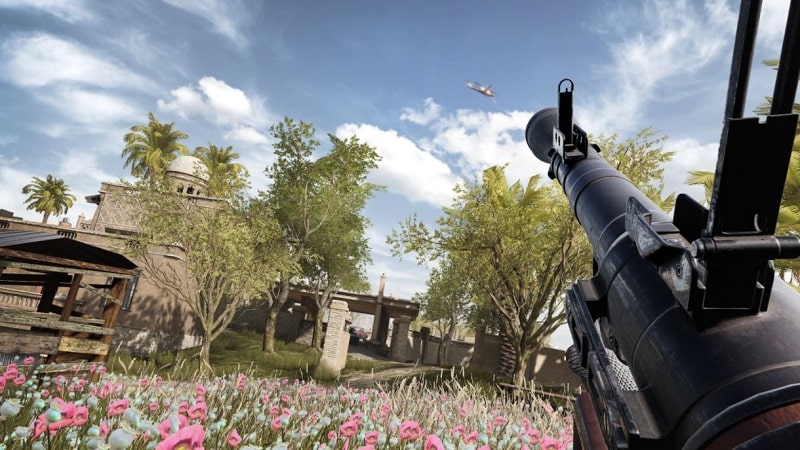 The gunplay too, also feels thoroughly enjoyable in a way that was, quite frankly, surprising. From popping off single shots through broken splints in a wooden fence, to dumping smoke into a building and going in with your gas mask or following tracers during a night battle with your optics, the gunplay in Insurgency: Sandstorm is fantastically evocative in a way that other games just haven’t been able to manage as of late.

Complimenting the superbly immersive combat of Insurgency: Sandstorm is how the guns feel. From the blunt force trauma and rumbling thunder of the M870 shotgun to the snappy pop of the M16A4 and the thrumming rattle of MP7, every firearm in Insurgency: Sandstorm feels, sounds and looks the part in a such a way that it only serves to enrich that feeling of authenticity even further.

Speaking of authenticity, there are a range of neat additions to the moment to moment action of Insurgency: Sandstorm that exist beyond its one-hit kill mechanics and onus on tactical play and coordination. Players can call in airstrikes and artillery support, while the ability to check your ammo (the UI doesn’t be default show your ammo count) is another nod to realism that again serves to make you a far more cautious and careful player than the pre-conditioning of Call of Duty and its ilk might have previously allowed. 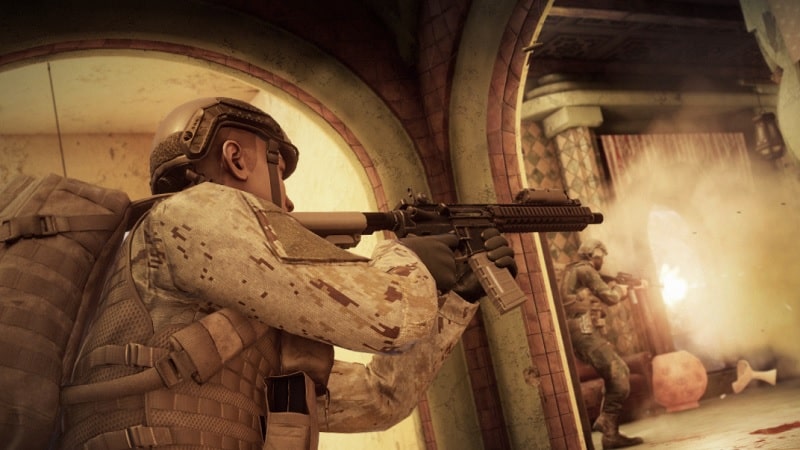 Where Insurgency: Sandstorm falls down somewhat is in terms of the breadth of its content offering. Though there are sufficient number of maps that each have weather and time of day based variations, there isn’t a whole lot of variety in the game modes. So if territory capture and deathmatch game types aren’t your bag, there’s a risk that you might tire of Insurgency: Sandstorm a little quicker than most.

In terms of the audiovisual presentation, Insurgency: Sandstorm does pretty well here too. Visually speaking the game is attractive enough, with a higher framerate and resolution for PS5 folks that keeps the action smooth. Unfortunately the character models aren’t that great as they lack some of the higher detail seen in the PC version of the game – though arguably this is one area where next year’s native PS5 version should address things.

However, the lighting glitches that cause character models to be thrown into complete darkness regardless of the environment, or the occasional (though ultimately seldom) physics errors that sometimes manifest and cause some objects in the environment to float off the ground, though disappointing, should be fixed easily enough by the inevitable forthcoming patch update. 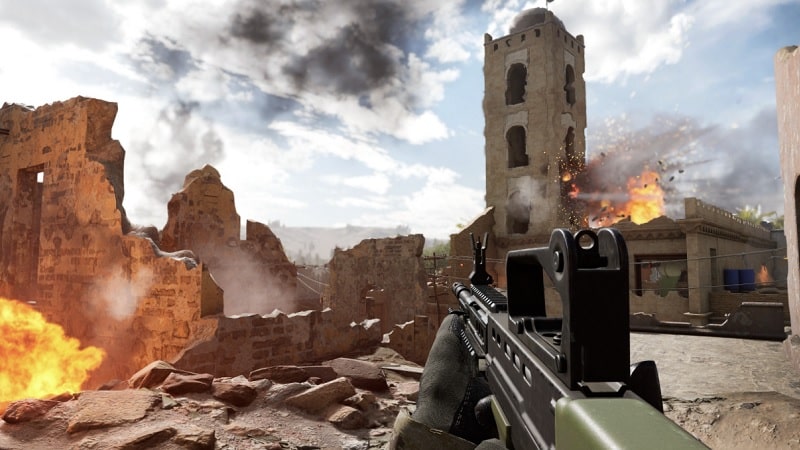 Really though, it’s in the sound department that Insurgency: Sandstorm does its best and most notable work. As alluded to already, the guns in Insurgency: Sandstorm all sound fantastic, but it’s how they interact with the environment that really stand out – as bullets ricochet off of surfaces and skitter around and above the cover that you’re positioned behind in such a way that it makes wearing a 3D headset when playing Insurgency: Sandstorm pretty much essential. On the same tack, the audible callouts that come from your friends (and enemies) during battle also help to couch the game in an all-pervading intensity that you don’t really see in other shooters.

There’s decently incentivised progression in Insurgency: Sandstorm too. Playing for an extended period of time allows you to unlock additional classes that each in turn have their own unique gear, while from one round to the next, players can unlock new weapons, attachments, grenades and extra gadgets – assuming of course you happen to be on the winning side of the conflict that you happen to be embroiled in.

Though a small handful of glitches and slightly fewer maps and modes than we would like serve to tarnish Insurgency: Sandstorm’s overall offering a tad, it’s undeniable that the very particular and grounded form of close quarters combat and firearms conflict that it preaches is singularly compelling and quite unlike anything else on PlayStation. Simply, if you’re on the lookout for a tactical FPS that prides itself on fostering not just skill, but tactical leadership and underscores it with hellishly tense shooter combat, then Insurgency: Sandstorm’s console debut hasn’t just been overdue but it should also absolutely be your next purchase.

Insurgency: Sandstorm is out now on PS4.

One of the most intense and authentic feeling shooters to come along in a long while, Insurgency: Sandstorm prides itself on realistic gunplay and tactics to fashion one of the better online shooters that PlayStation platforms have seen in a good long while.