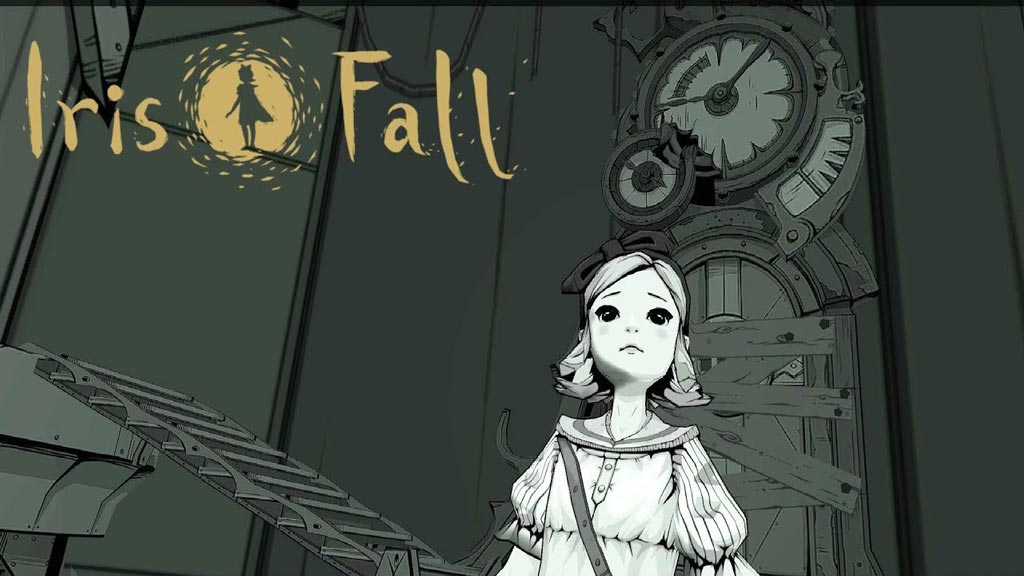 Iris.Fall PS4 Review. Chinese developers NExT Studios‘ monochrome puzzler Iris.Fall makes its way over to consoles from the Steam release back in 2018, and it looks as stunningly beautiful as ever. Despite its country of origin, the art style and narrative is more akin to a Victorian-era graphic novel mixing the abstract whimsy of Lewis Carroll with steampunk machinery which you manipulate to unlock each scene. Entirely without dialogue, the story unfolds through a combination of animated line drawings, artfully rendered puzzle scenes and linking animations combining the two styles.

Puzzle games are something of an acquired taste though, so having drawn in potential players with a visual feast, will the puzzles be accessible to the average player or will they stop most non-boffins in their tracks? Read on and find out, cuddly simpletons…

The story centres on young Iris, as she follows a black cat through a gently intimidating dream world, with increasingly more difficult puzzles to solve in order to progress to the next scene. Beautiful art design is stunningly realised as a living world, with impeccable animation and camera work as Iris moves through the story. Static black and white scenes are spotted with touches of colour and subtle animated details creating a living graphic novel which is entirely devoid of exposition.

Light and dark is central to the narrative, and many puzzles involve Iris switching back and forth between her normal form and her shadow in order to manipulate the environments and to move through the Victorian industrial dream world. Along with using switches or moving blocks, Iris can also collect items in her purse which can be placed in order to trigger a door or platform to allow her or her shadow through a blocked area.

Movement through the faux 3D scenes with the left stick is relatively simple with just two other buttons required to trigger various switches and open Iris’ inventory. So while there is the illusion of playing a platform game, there’s no jump button and there’s never any ‘action’ other than the grinding of your brain cogs.

Each playable scene in the game is an enclosed and relatively static room with a central problem to solve. The puzzles are graded in such a way that the complexity increases pretty much perfectly over the course of the game. Occasionally the game throws you a bone in the shape of an image which shows you a route to the solution, but generally the concept of each puzzle is simple enough to work out yourself. While the mechanics of the puzzles are simple, the solutions can be something else entirely.

Certain puzzles proved to be overly tricky stumbling blocks in the flow of the game, particularly the Rubik’s Cube puzzle which unless you have a propensity for this type of lateral thinking, will cause a huge amount of patience-testing frustration. Rather than having an option for a hint or a ‘get out of jail’ card for one puzzle which stumps you, the game steadfastly leaves you stuck with the only option being a YouTube walkthrough which can only ruin the immersion.

Fortunately the atmosphere and sumptuous art style is so compelling, most players will persevere, but it could prove to be an issue if you don’t have the patience for certain brain teasers.

Should the puzzles not prove too taxing, you’ll whip through the whole story between two and three hours but rather than feeling short changed, you’re more than likely to feel sated. Each scene is visually and technically unique with puzzle types rarely duplicated and as the story moves forward, you’ll often be mesmerised by how utterly beguiling the art direction is.

Perfectly judged picture-box music swoons in and out between puzzle scenes, with subtle spot effects accompanying the puzzles themselves and the atmosphere is completely in sync with the darkly whimsical tale.

The Eyes To The Left, The Nose To The Right

So after you’ve rotated blocks, connected wires, moved stairways, lit lamps, raised platforms, matched puzzle pieces, evaded bats, shone lights on eyeballs and reanimated marionettes for several hours, you’ll finally get to see the exquisitely animated denouement of Iris’ fable. There’s nothing particularly shocking about the slight twist in the tale, and my slightly apathetic response to the ending highlighted that the most enjoyable aspect of the story was the experience of discovering the audio/visual delights of each subsequent scene.

The journey itself was more satisfying than finding out why Iris was chasing a black cat through a dream world, and the ambiguity of the twist makes the story somewhat nonsensical. No matter though, as sometimes style over substance is perfectly OK when it’s this immersive and enchanting.

Review code supplied by NExT Studios.

Iris.Fall is out now on PlayStation 4.

A brief but mesmerising monochrome puzzler which constantly impresses with its audio/visual brevity, and occasionally stumps you with some impassable brain-teasers. Highly recommended for fans of graphic novels and puzzles, but with the caveat that you'll be on a YouTube walkthrough at least once during your time with Iris.Fall.