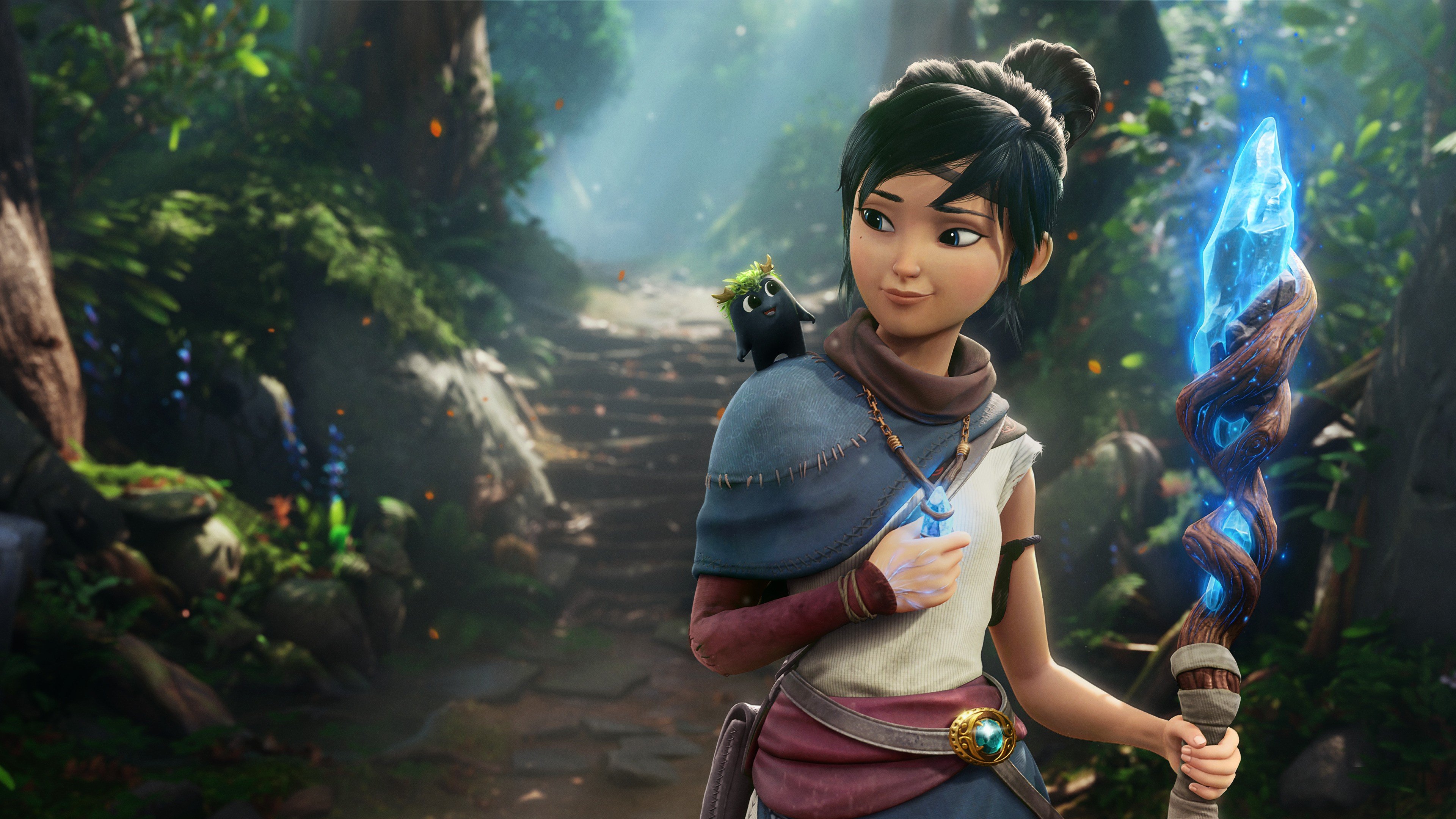 After many delays since its July 2020 initial reveal, Kena: Bridge of Spirits is finally available for purchase on PS5 and PS4. This also marks the first release for Ember Lab; a small indie team with a background in commercial animation. Their prowess is clearly on display with animation and art that could bring even the animators over at Pixar to envy.

Kena: Bridge of Spirits feels very faithful to the history of video games, with a classic feel complemented by a gorgeous aesthetic. Whilst there are a few minor rough edges on the technical side, and a few loose plot threads, Kena shines with a cathartic, and surprisingly challenging adventure, that is beyond impressive for a 15-person team.

A World That Breathes

Simply put, Kena is a breathtaking visual showcase. The exceptional art design and detail will make even the most seasoned players run through the vibrant South-Eastasian-inspired forest, with the wonderment of a child.

Not only is your imagination enthralled, but the traditional Gamelan percussive music adds a flavor of authenticity to your journey, as it constantly shifts to match the context of the action.

Every area feels like it breathes. Small details, such as rustling flora, and floating seeds that blow with your every gust, immerse you in the very air of the game. The only thing missing is grass that moves with your feet.

However, this is a $40 dollar indie game, and you can’t have it all at that price. In fact, the graphical caliber of this game is probably far beyond that of many full-price AAA releases.

While the radiant colors of the world are simply enchanting, the real magic of Kena is in its character animation. Everyone’s actions flow like poetry in motion. Furthermore, the amount of heart Kena’s characters generate, with nothing but subtle facial animations, rivals that of big budget animated feature films. 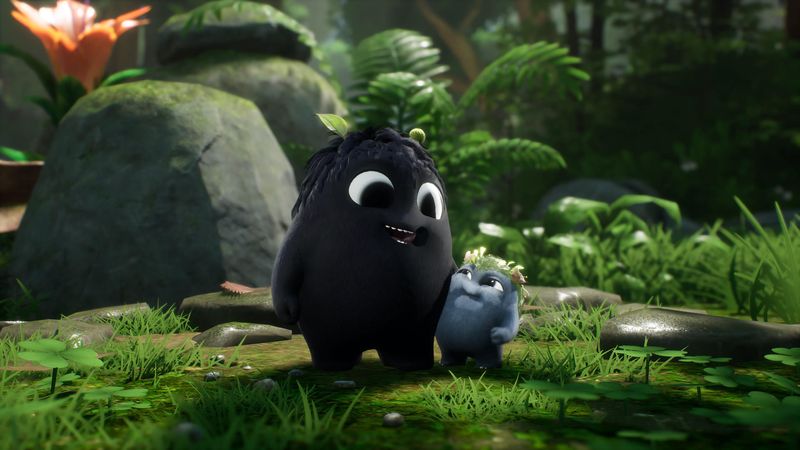 In so many ways, Kena: Bridge of Spirits feels like a Pixar film that you just happen to be controlling. The big movie feel is perhaps most demonstrable in the cutscenes.

Every shot is angled perfectly to accentuate the drama of the scene, and complemented by some wonderful electric particle effects that often decorate the cutscenes, as well as during gameplay.

However, despite the movie-like virtual cinematography of cutscenes being very appreciable, the frame rate is not. Ember labs have opted for a film-typical, but game awkward 24FPS. 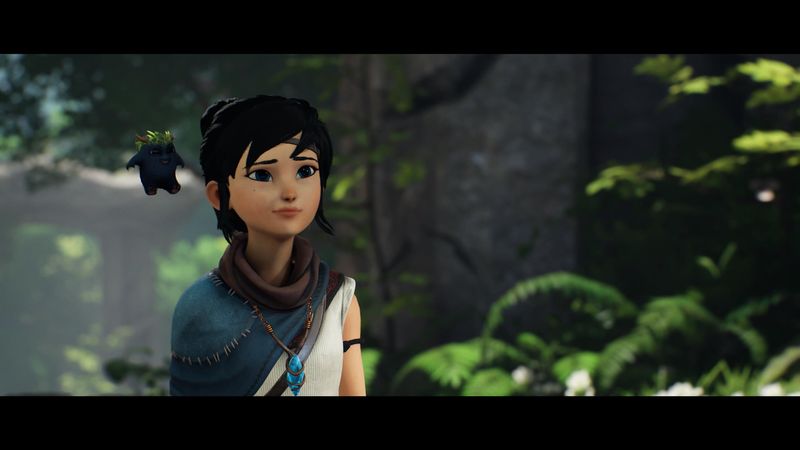 Sadly it contrasts uncomfortably with the 60 FPS gameplay, and generally will feel a bit off on any 60Hz display. That being said, its a minor blemish on a superb next-gen experience.

Additionally, Kena feels all the more next-gen for making great use of the PS5 DualSense features. Specifically; the tension in your bow trigger, the haptics to match the carnage, and handy little pulses that let you know a secret is nearby.

Despite being Ember Lab’s first effort, Kena Bridge Of Spirits feels more like a video game than any other title in recent memory. 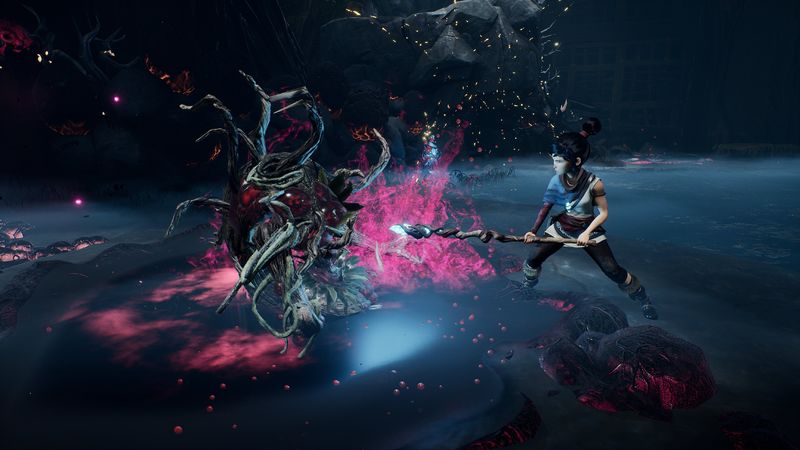 While there are a couple of interesting gameplay mechanics, but this is very much a run-of-the-mill action adventure experience. It fits the mould somewhat unremarkably. Moreover, it could have done so at any point over the last 15 years.

However, for all its familiarities, Kena does most things very well. Combat is fun, challenging and rewarding to master. With various upgrades, you are afforded a decent amount of opportunity for creativity.

Players will definitely enjoy landing a bomb on an enemy, lining up a mid-air arrow shot in bullet time, and releasing a devastating piercing attack that not only annihilates a row of enemies, but detonates an area attack on other surrounding enemies as well. 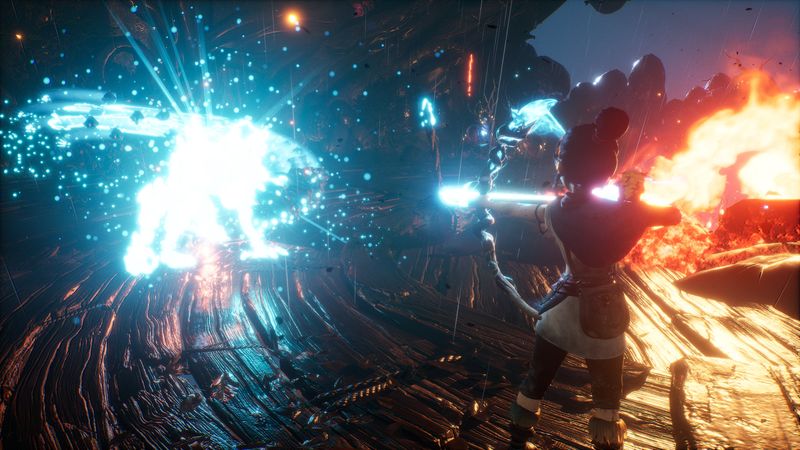 There are a surprising amount of enemy types to quell for a 10 to 12 hour game, many of which demand unique strategies to deal with. Consequently, the fights are rarely routine, and you’re always on your toes.

A few quibbles we might have had with some functionality, such as the camera, parrying and dodging, have fortunately since been addressed with early patches. Consequently, as of a week after release, the combat is now buttery smooth fun.

Despite being mostly unoriginal, there is one feature of gameplay that really does manage to stand out from the cluttered genre Kena finds itself in. Namely, the criminally cute little critters confusingly known as “The Rot.” 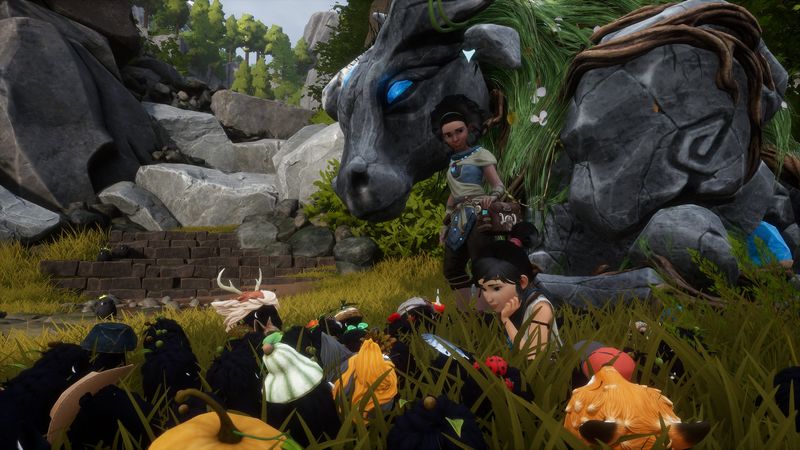 These furry little followers have your heart stolen the moment you lay eyes on them. Unquestionably, accumulating the little rotters will be one of the highlights of the experience. Each one discovered lifts your soul with a unique animation.

It isn’t just fleeting moments of fluffy joy upon finding them, they actually congregate around you, or on the scenery cheering you on during gameplay. Furthermore, you can customise each of the 100 potential rot followers with their very own hat, purchasable at a hat shop! The fuzzy feeling inside will be very real.

The rot also have a functional purpose. The rot enables Kena to perform special moves, such as hassle enemies, or enhance regular attacks for devastating damage. Upon finding a rot tear, the rot band together to form an aqueous beast at your command. 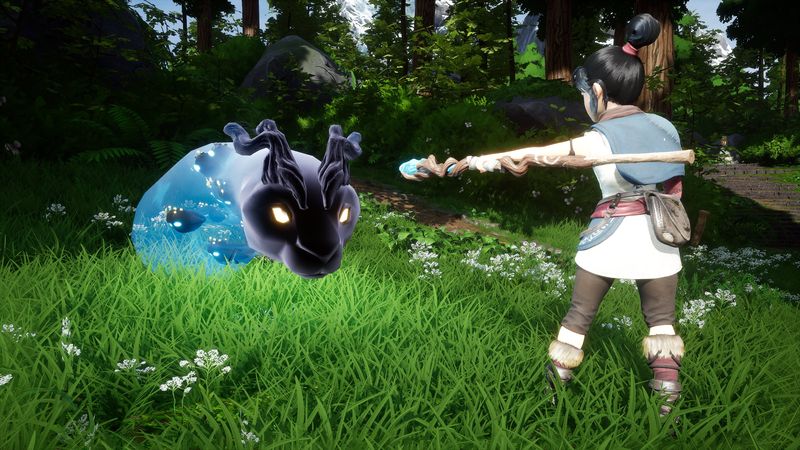 The size of the rot beast constantly grows depending on how much rot you had found, eventually becoming an enormous behemoth you’ll be proud to be thrashing around. Sadly this wasn’t available enough in combat circumstances, and is mainly used in puzzles.

Speaking of which, the puzzles are another highlight of the game. Despite being composed of overly familiar elements, there is a decent amount of sophistication to the puzzles.

Ember Labs has managed to pull this off without creating obnoxiously difficult challenges. Nothing is obvious, but visual cues elegantly hint at the proper approach. By the end you’ll be happily scrambling around warp gates and manipulating the scenery, outsmarting the obstacles like some sort of druidic Kasparov. 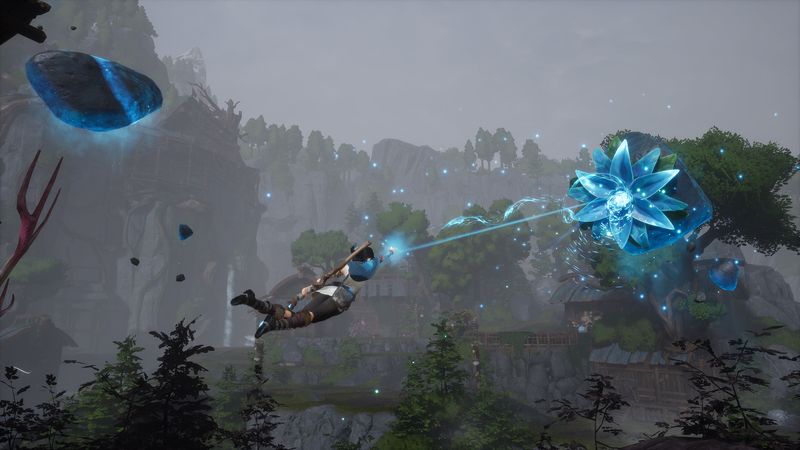 The only real rough part of the core loop is in Kena’s platforming. The distinction of what you can and can’t land on is not always obvious, and how the game code handles these instances isn’t particularly flattering.

Through all the beautiful scenic vistas, collecting furry friends for a romp in the woods, you will no doubt be feeling a warmth — perhaps even a sense of security, as you explore the land. Oh, how misplaced you will realise that feeling was. 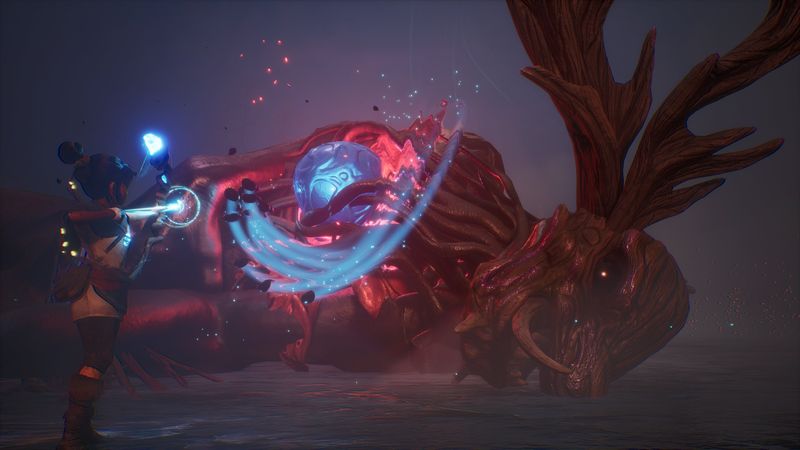 Upon your first major boss fight, Kena: Bridge of Spirits will bring you crashing down from your jungle book fairy tale into a world of hurt. Even on the normal difficulty, Kena’s bosses are tough; Souls-like tough. For a game that at least looks like it’s aimed at kids, there’s definitely a demographic there that will struggle without lowering the difficulty.

While many others will enjoy and embrace the boss challenges, the initial spike difficulty is still very surprising. After finally conquering the first boss, you will be significantly better at the game, and the difficulty curve stabilises as a result. However, the initial escalation of the difficulty creates a strange knot in the overall structure.

Difficulty aside, the boss fights are always a satiating battle. Every single one comes with unique demands for victory, and incrementally forces you to employ your acquired skills. In these moments, Kena absolutely feels like a real classic of a video game. 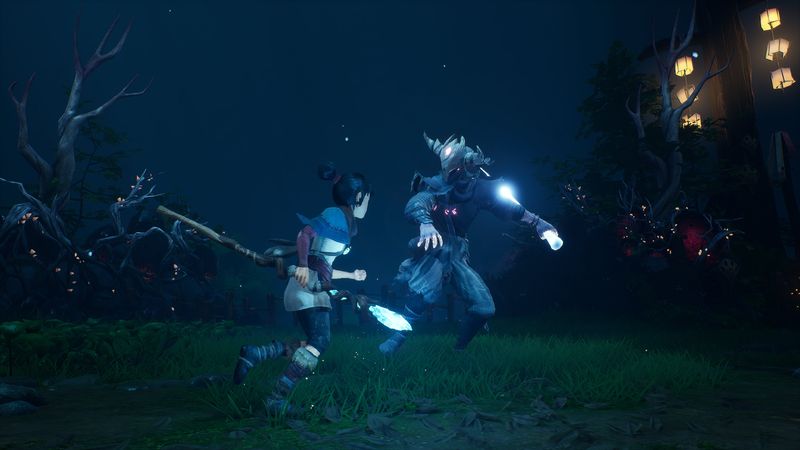 Tying all the fun together, the plot lies unintrusively in the composition. On one hand, it is great that nothing is overly explained. Like any classic tale, no extensive character background is required.

The adventure flows beautifully without being hindered by heavy details, leaving you to enjoy the character interactions through their wonderfully emotive animations. On the other hand though, there appear to be parts of plot that disappointedly just go absolutely nowhere.

The story is about our young titular spirit guide, who has arrived at a desolate and cursed mountain village. Kena seeks a sacred shrine there, but in order to reach said shrine, must help the spirits of the village to lift a curse, and move on to the other side. 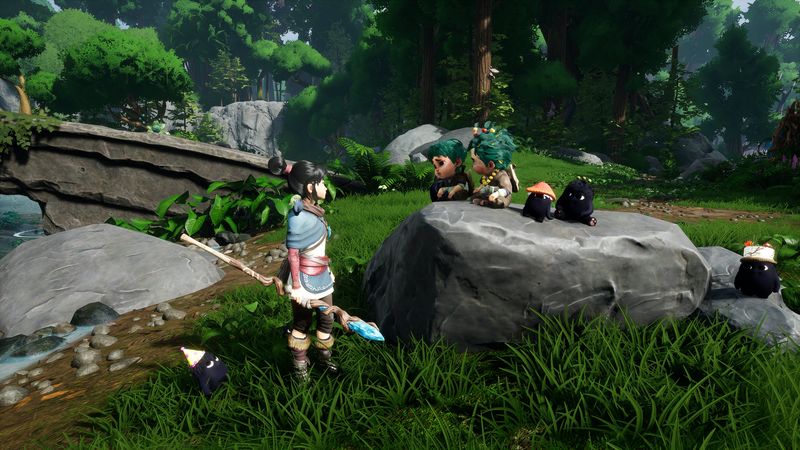 Without giving too much away, there’s slightly more detail hinted at within the premise. There is what you would presume to be some sort of MacGuffin highlighted in an early interaction. Bizarrely, it just never comes up again.

The plot, which entirely focuses on the healing of the village, follows a fairly clichéd eco message. Despite being a little predictable, that is not all that Kena is about. Above all else, Kena is an emotional game about grief, regret, and coming to terms with loss.

It’s actually quite staggering how cathartic the process is. The score, the animation and the story all come together to deliver a sincerely heart aching and touching tale. No one will put it down without a profound feeling of sentimentality. 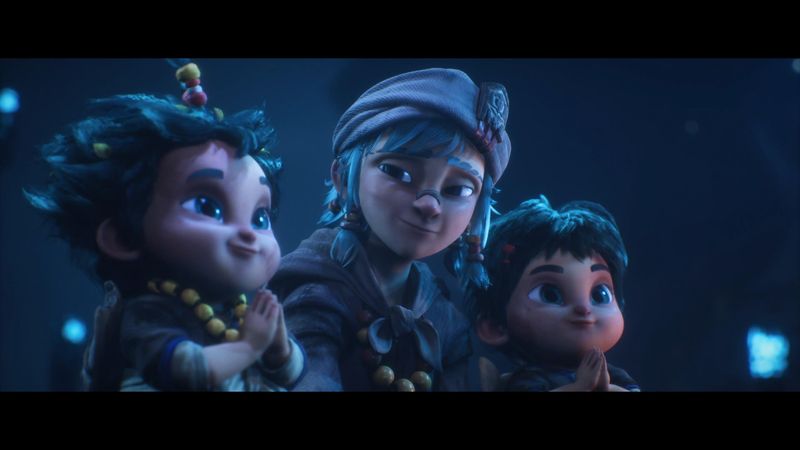 All things considered, Kena: Bridge Of Spirits is a fantastic debut for Ember Labs. It would certainly appear that this studio could be a big player in the future. However, Kena does also have the slight aches of a team’s first game.

The platforming elements could be a little tighter. Additionally, the game did release with a few technical issues. However many of these have been promptly resolved as of version 1.06.

Technical issues aside, all other elements of the gameplay shine, albeit in somewhat conventional way. Furthermore, Kena offers an astonishing amount of challenge for battle-hardened players, in stark contrast with its cute and cuddly appearance. 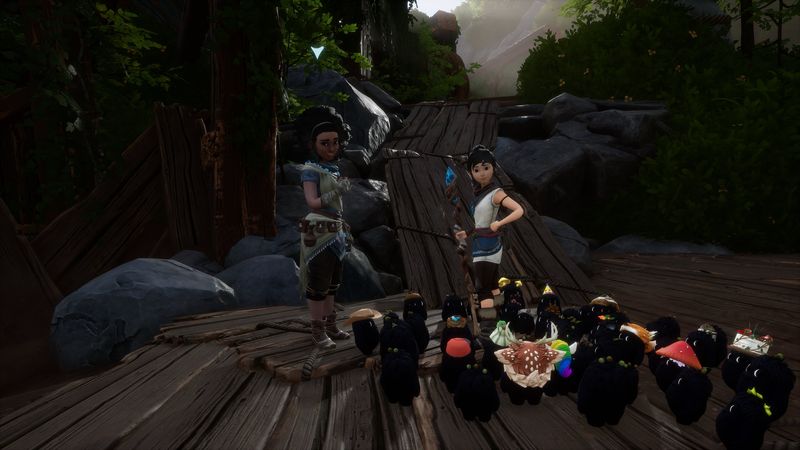 A few loose ends in the plot only slightly tarnish the joy of the adventure. For the most part, players will be severely endeared by the characters and the unbearably cute Rot. Certainly your attachment to these critters will far exceed your expectations, and so will the game itself.

Kena is by all measures a magical short adventure in one of gamings most beautiful worlds. Furthermore its well worth its price, and gives us every reason to believe that Ember Labs is one to look out for in the future.

Kena: Bridge of Spirits is stunning spectacle full of heart and unbelievable charm. If you aren't carefully selecting hats for your Rot companions by the end, then you're probably made of stone. In the event that your soul is inhospitably frosty, Kena can be deceivingly challenging, throwing boss fights at you that will make those on Demon Souls look like a cake walk. A few minor issues stop Kena from being a showstopper, but there is no doubt that this a great game, and an amazing debut for a 15-person strong team.