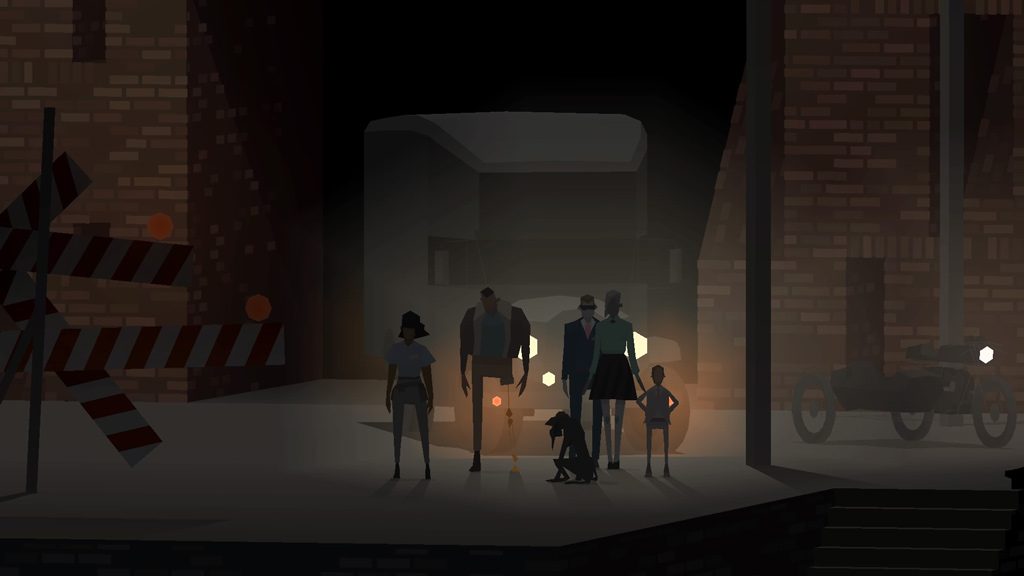 A man in a sharp blue suit with a shock of white bouffant hair stands meekly at the bar next to a shabbily dressed and dishevelled bearded man of the same age who is gesticulating wildly while ranting enthusiastically at him: ‘Necessity might be the mother of invention, but restriction is the mother of efficiency’ he bellows.
David: ‘You’re right on the money with that.’
David: ‘We’re all like detectives in life.’
David: ‘There’s something at the end of the trail we’re all looking for.’

Terry shakes his fists in the air at David’s philosophical nugget and finishes his bourbon in one gulp, as the bluegrass music from the silhouetted trio in the corner begins to meander visibly into the air, like mist on a spring morning…

Like the best works of David Lynch, Terry Gilliam and Charlie Kaufman, Kentucky Route Zero inhabits a dreamy parallel universe where the familiar is present and correct but there’s a dark skew which unsettles and hypnotises in equal measures.

Very few games are content to inhabit a space in which William Burroughs would feel at home; fortunately Cardboard Computer have thrown off the shackles of the linear narrative and concocted a highly cerebral adventure which is an enchanting combination of strange melancholy and perverse black humour.

One Man And His Dog

Conway is an ageing delivery man who seems to be at the end of his working life, aiming for one more delivery to an address on Dogwood Drive. Accompanied by his deadpan dog, he travels to a series of godforsaken haunts in his ailing delivery van, meeting a cast of disparate, struggling but oddly upbeat characters along the way.

Each chapter in the story is bookended by a theatrical title and number – Act I, Scene III and so on. Gameplay is primarily handled via low polygon characters which can be moved in 2D across beautifully drawn simple 3D backdrops. Action icons are usually represented by an eye to signify an object worth investigating. A text box and a name underneath is where you can interact with other characters.

Clicking on the text icon opens the dialogue box where you read the conversations as they play out, with multiple choices available for your responses, and later in the game, with multiple character responses if you decide you would prefer someone else to chip in. There is an abundance of text to read, but the majority of it is eloquent, intelligent and interesting so it usually feels like there is character or story development with each interaction.

Your main quest to deliver the final parcel involves trying to follow an intricate web of clues and misdirection from the eccentric and lonely characters in order to locate the mysterious Kentucky Route Zero which you have been told will lead to your destination: Dogwood Drive.

As the story unfolds however, this quest fades into the background as you become drawn into each of the scenes, all with their own individual stories to tell and new people to meet. Across the five ‘Acts’, you will gain new team members, all of whom add a new perspective and opinion which manifests itself in additional dialogue ‘trees’ and conversations.

Maps To The Stars

During Acts I and II, you frequently revert to a map of the local road system and control a wheel to represent Conway’s truck to investigate different landmarks with new locations opening up as certain events are triggered. Act III onwards transfers you to Route Zero, a strange looping road with vector graphic images appearing as you drive past in one direction. A change of direction (or designated driver) reveals new items, occasional points of interest and unfathomable road signs.

This Route Zero puzzle will eventually reveal its secret but even with this singular obtuse repeating loop, the game always maintains a meditative, hypnotic atmosphere which rarely grates or wastes the player’s time. The rest of the gameplay is slow, thoughtful and measured, encouraging one to absorb the rich, strange aura emanating from within.

There are so many memorable moments in Kentucky Route Zero (spoiler alert): the musical duo who arrive so late at the venue, everyone has left but their mesmeric performance literally lifts the roof off; the bonus scene between Acts which plays out in third person where you watch a conversation from your table between the barman and a customer and then realise you’re an actor in a theatre stage play; the underground whisky distillery run like clockwork by skeletons; there are numerous others.

Throughout the opening Acts, the visuals are mostly static but with a stark evocative artistry to them. As Conway advances on his journey into the latter Acts, the graphic representations of each scene come to life and become 3D spectacles of low light and pastel understatements of sheer beauty which beg to be saved for posterity.

The minimalist audio effects are efficient in creating a vibe somewhere between Silent Hill and a 70s Werner Herzog movie interspersed with the celestial melodies of the musicians who are glimpsed in forests and bars for the duration of the game. It’s an interesting mix but it perfectly suits the stark surrealism in the script.

Seven Years In The Making

The developers (the three guys who make up Cardboard Computer) have worked on the game since around 2010 with the first reveal coinciding with the Kickstarter funding campaign which led to the release of Act I on Windows in 2013. Subsequent chapters followed over the next 7 years leading to the final Act (and all the previous acts) appearing on multiple platforms in January 2020.

The graphical fidelity and depth of emotional storytelling has increased during the development process meaning Act V is well worth the wait, exemplifying the immense talent and creativity of the development team who will no doubt create a string of original and vibrant works of videogame art in the future providing they stay independent.

As the game draws towards its conclusion, fault lines appear in the shape of scenes which are too reliant upon reams of text or repetitive actions without much of a payoff. Having said this, the sheer volume of alternative text which will go unread without a replay is staggering – the three person team behind this game have injected a vast array of content over the nine plus years of development and, like a good film or book, repays the viewer with each visit.

The only other negative point to raise is that the narrative felt somewhat meandering, partly due to the extended development time meaning the focus on the story had dissipated in the intervening years. Despite this, there is a miraculous cohesion to the whole in look, feel and mood considering the bizarre development period so maximum kudos is due to the Chicago-based team for maintaining the mood for the eight or so hours playtime.

Overall, there’s not much to fault here if you are happy with a cerebral and leisurely stroll into a strange parallel universe, and you don’t mind reading and absorbing the nuances of a sizeable amount of text.

At the end of the journey, you will have been rewarded in spades with a touching and thoughtful tale of people who were once lost in a wilderness who found redemption in each other.

Kentucky Route Zero TV Edition is available for PS4, Xbox One and Nintendo Switch from February 2020.

Kentucky Route Zero is a game for those who are happy to slowly digest the measured nuances of a text heavy, but visually stunning and thought provoking adventure. Narrative weirdness abounds but it is anchored by a cast of charming and gentle characters who you will grow to love.