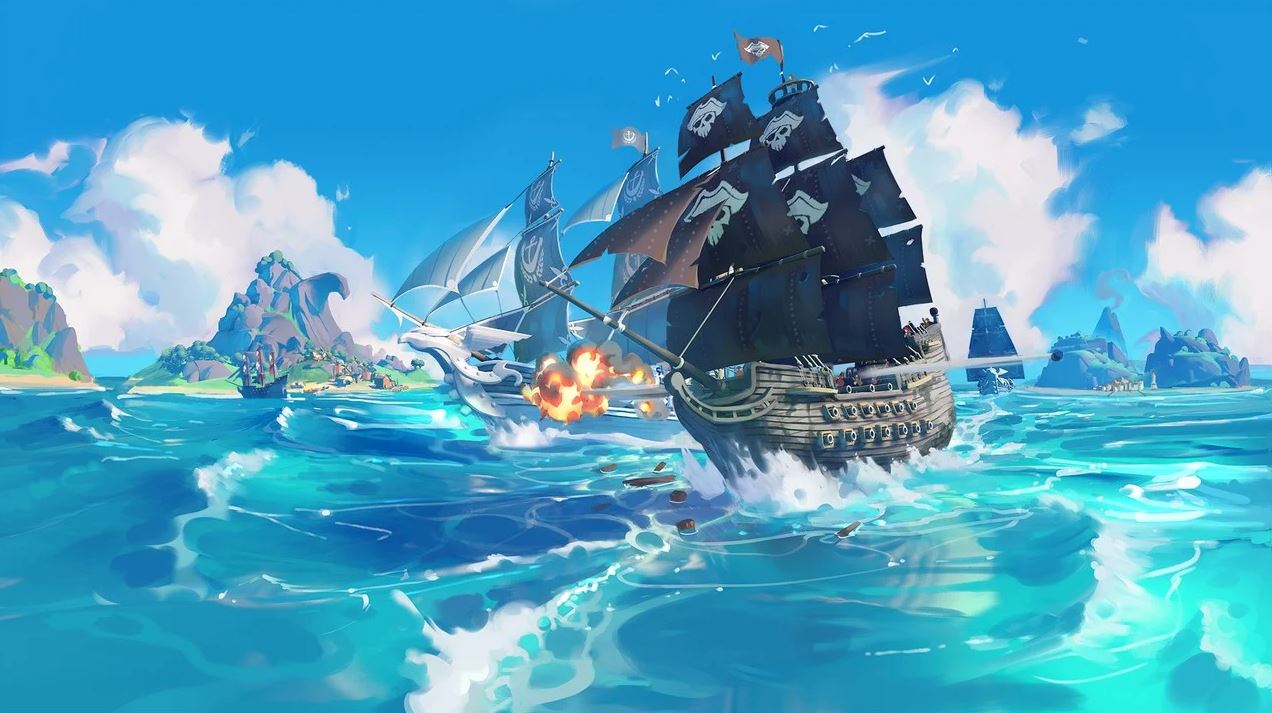 King of Seas PS4 review. King of Seas is the latest Team17 published title, developed by 3DClouds – a small independent studio whose name so far has been accredited to a handful of racing games, each with a mixed reception.

King of Seas is a fresh genre and subject matter for the developer, with clear inspiration from Rare’s Sea of Thieves, although the similarities end at its pirate themes.

A Seafaring Odyssey That Deserves Better

Whereas Sea of Thieves is a third-person action adventure in which a team takes on different roles upon a ship, King of Seas is a single-player, third-person action RPG in which you solely control your frigate in a story of piracy which includes all of the genre’s stereotypical tropes; a story of mutiny, folk-style melodies and loot aplenty. Saying that, it soon becomes apparent that its lore isn’t strictly accurate, with tentacles emerging from the ocean to attack your ship, and the first power-up adding a flamethrower to the front of your vessel. 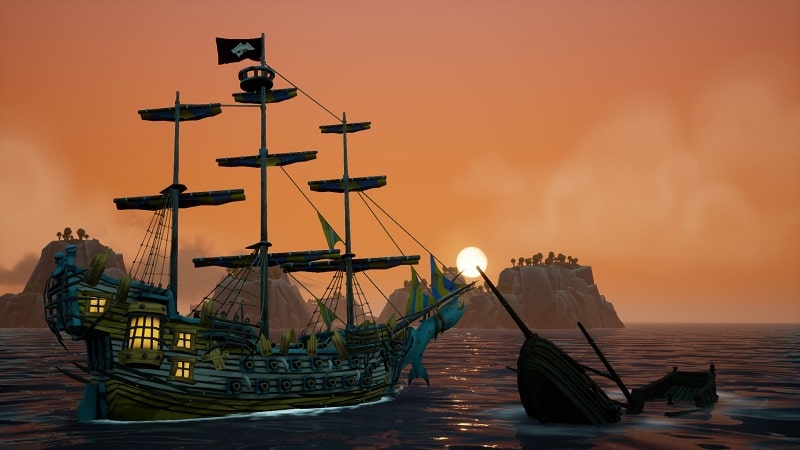 Unfortunately though, for an action RPG, it’s seldom action-packed. As per tradition, your pirate ship is loaded with cannons at either broadside, so you must work to get up alongside your foes and get the first shot in to stand a chance at victory – but being in this position naturally leaves you exposed to attack, too. It’s an extremely cumbersome feeling, to know that even the most tactically positioned ship is still prone to return fire.

When you’re evenly matched in terms of level, it can and often does come down to a 50/50 chance as to who can deliver the finishing blow first, while higher-levelled enemies require some serious luck on your side in order to guarantee victory.

One early quest tells you to take down a level 10 Royal Navy ship, but you also need to reach level 10 before it spawns in the world and its location is revealed to you on the map. Once I’d reached level 10 and took on this story-based enemy for the first time, it only just managed to sink my ship and I was forced to try again. When I came back, this particular ship was now level 15, and clearly had no trouble taking me down while I was still at level 10. 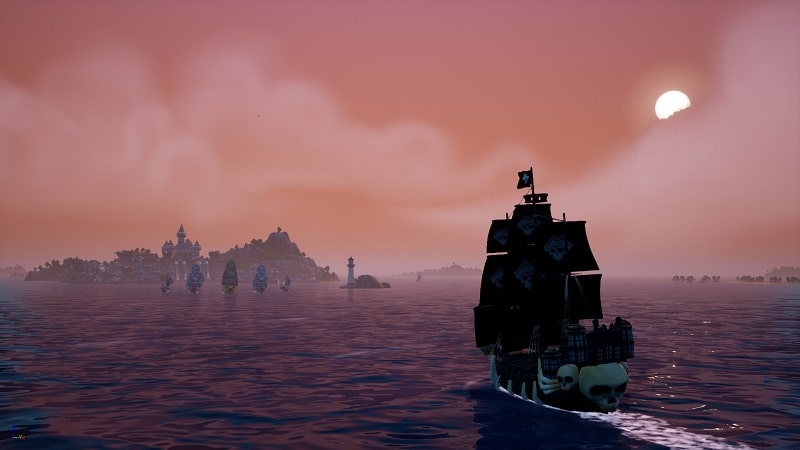 It was then apparent that King of Sea’s quests are often artificially padded out to extend its total running time. I felt forced into some side missions and grinded my way up to level 13, before finding the objective enemy was now level 17 with two ships accompanying it for good measure.

After gradually whittling its health meter down to less than one-quarter, after what must have been half-a-dozen attempts at ducking out of combat, repairing my own ship, and re-engaging – which became ridiculously tedious – the seventh attempt saw the enemy’s health completely and inexplicably replenished and I had to start over with no more repair kits. Infuriating!

Luckily for my sanity, it was at this point that I realised that explosive red barrels are scattered around the game’s world. If you can lure your enemies into these, they’ll take more damage than your humble ship’s cannons could ever inflict in a single shot. It seems unfair and I felt like I’d tricked the system, but I was so frustrated by the whole levelling debacle that I didn’t mind. 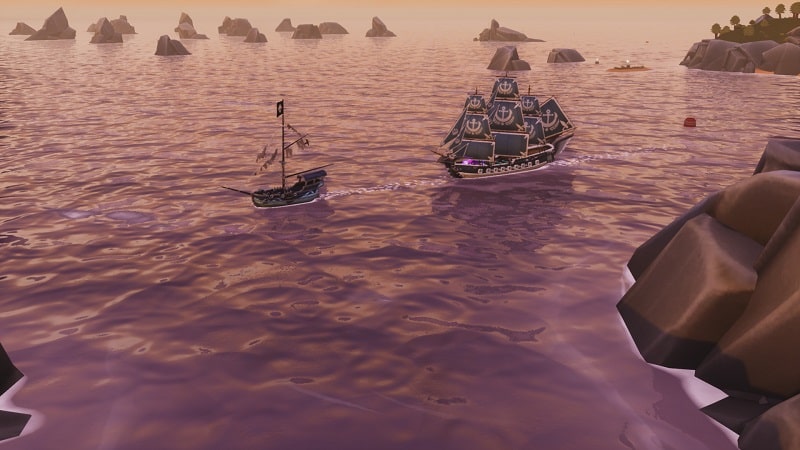 Outside of the combat and story focused missions, you can dock your ship at any of the friendly ports that are dotted around the world. It’s here that you can repair your ship’s hull and sails, recruit crew members – which effectively serve as a third health meter – trade goods in the market, or take on side quests from the tavern’s notice board.

There’s no rendering of any of these locations, with everything instead communicated via a series of stylised menus and dialogue communicated in classic RPG fashion; two beautifully hand-drawn characters are presented on screen with a text box depicting their conversion with no voice acting, but that’s not a problem. It works for Advance Wars and Pokemon and there’s no reason why it shouldn’t work here.

The writing is witty the characters tie in nicely with the overarching story – however, the same characters are present at each of the game’s ports, confusingly enough. There’s also a couple of hiccups with some duplicated side quests becoming available at various locations across the map, and it’s naturally quite jarring to read the same script multiple times over. 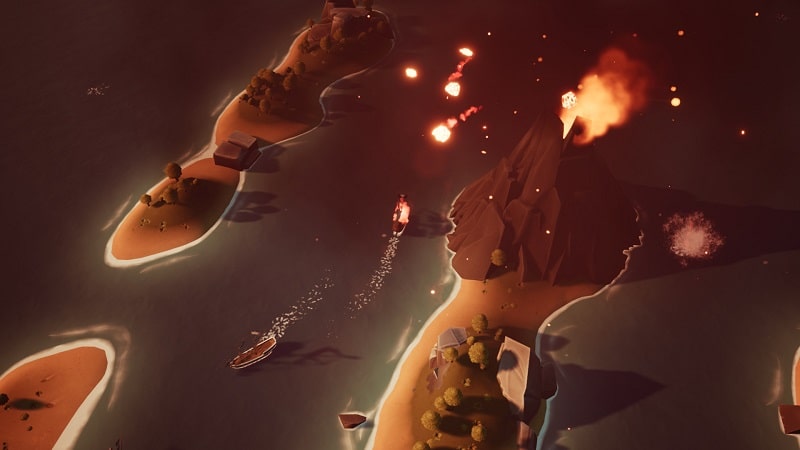 Side quests themselves are categorised by difficulty and come in repetitive shapes and sizes. Some will have you sinking a certain number or type of Royal Navy ship, some are escort missions, while others are simple fetch quests.

Sadly, King of Seas is somehow more of a slog when outside of combat than it is when you’re coaxing an over-leveled Royal Navy ship into an explosive barrel. Tapping R1 up to three times gradually raises your ship’s sails and can be rotated by turning the left stick. If an NPC has asked for an object to be delivered to an island on the other side of the map, it’s a case of opening up your sales, pointing in the right direction, and using the right stick to meander around occasional obstacles and fellow pirate ships.

Even the accompanying shanty – which dramatically strikes up whenever you leave port – eventually tires and will fade into nothing as the sounds of the sea take centre stage. With no voice acting to speak of either, King of Seas is definitely a game you’ll want to add your own soundtrack to. 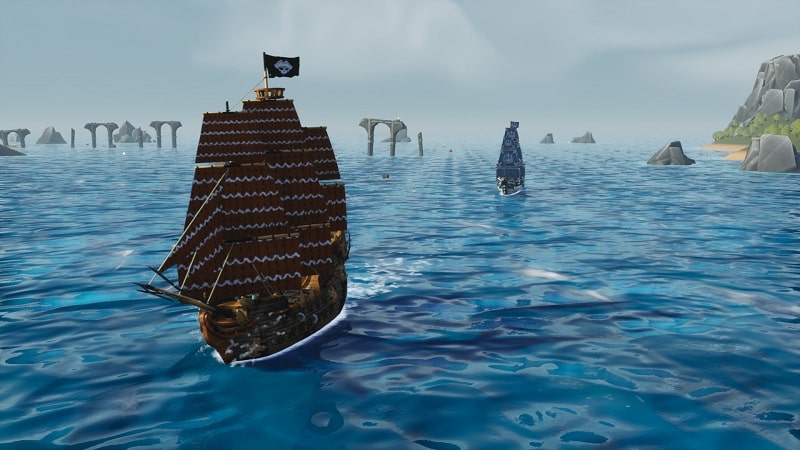 Visually, King of Seas is unremarkable but the visuals serve their functional purpose for the most part. The aforementioned character drawings are a highlight, along with the visual style in the menus once you’ve docked your ship, but the ships themselves, the ocean and the world at large during gameplay are bright and colourful yet uninspired. It’s safe to say there’ll be no issues running this on your launch model PlayStation 4.

King of Seas isn’t a terrible game, and it doesn’t do anything particularly offensive, however the culmination of frustrating combat, dull sequences in-between and poor pacing make it a real hard sell. The writing is good and the characters are creative, but there’s just not enough depth to this particular stretch of ocean.

King of Seas is out now on PS4.

King Of Seas ultimately suffers through a lack of visual polish, some frustrating gameplay mechanics, and dull pacing and sequences, which when all combined together create a thoroughly unremarkable experience that doesn't manage to hold its own against even some of the most average of pirate games on the market.