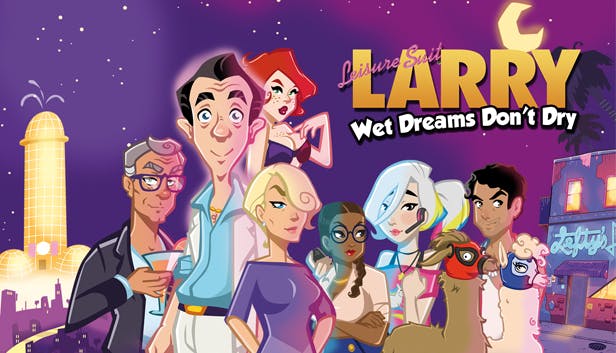 It feels strange to say Leisure Suit Larry’s latest game feels like a return to form, because that form feels rather strange (and as out of place as its protagonist finds himself) in the many years since it was last relevant. Does that matter though? Can you take it for what it is in 2019? Well, apparently yes, you can.

Wet Dreams Don’t Dry is unapologetic in its attempt to bring a little of the sleazy credibility back to the series, but whether it works or not entirely depends on its titular lead, and how he is framed.

Larry Laffer, for all his…ahem…charms, is not exactly the most likeable, or even pitiable, video game protagonist. His one man mission to make Austin Powers look like the embodiment of restraint has certainly not helped over the years, but let’s be real here, you aren’t really supposed to like Larry, you’re supposed to enjoy the comeuppance his sleazy deeds get him, and revel in the cruel rejection his pestering often merits.

Larry awakens in a bunker in 1987 and emerges in 2018, and now has to tackle more modern dating issues (mobile phones and their impact on modern dating being the biggest shift and source of jokes) and much of the game’s humor and interaction is built on this. Jokes do hit on a fairly regular basis, with the bum notes rarely left enough time linger (though when some particularly cringeworthy attempts misfire, they stay long in the memory).

Larry’s ultimate goal is to woo tech wizard Faith, and score high on the hottest dating app, Timber (parody is not the game’s strongest suit). But to do this, he must change all his 80’s tactics and slot into modern dating habits. Easier said than done.

As ever, it’s difficult to relate to Larry’s bewilderment at his constant rejection, but it’s still amusing to watch him get burned. Larry is a bit like The Office’s Michael Scott in how dunderheaded and clueless he can be, bit he hasn’t quite got the warmth and reliability of such a character. He can still be genuinely funny with his one-liners and self-deprecating putdowns however, and he does sort of grow as a person this time, even if it is just because he has to in order to achieve his lusty goals.

The objects of his affection are certainly better written these days, mainly because they’re not portrayed as…well, objects to the same degree they once were, and it’s their strength that makes Larry’s constant failure all the more amusing to watch.

With this being a new development team, there’s something a little off in the humour, a little nuance lost in translation perhaps, and while it’ll be of no consequence to most who pick this game up, it does lose a teensy bit of what made its self-deprecating vulgarity work, but what is commendable, is that Larry is a more interesting character under new management, and the structure if this old-skool adventure plays a significant part in that.

The puzzles are the highlight of the package, evoking the classic template and bring any number of weird objects and absurd interactions together to set up what is likely to be yet another romantic disaster for Larry. The humour is strongest in this area, really playing into the crassness and stupidity in inventive ways, and the reward for lining all these lusty dominoes up is to watch them spectacularly collapse.

Of course, being so entrenched in old-skool ideals, the puzzles are also a massive pain in the arse at times. Some are obscure enough to warrant clicking on every interaction and trying every combination of objects in order to progress, and that can rob the joy of solving them. It’s admirable that the old ways are even attempted here, but it’s understandable if it causes more ire than desire

The dialogue, while generally well-performed, suffers during these lows, as you here Larry’s whiny negativity again and again. Thin ice to be treading when your protagonist is already unlikeable.

Wet Dreams Don't Dry brings Leisure Suit Larry into the modern era in a suitably awkward and entertaining fashion. It's a good point n' click adventure, and is funny on a fairly regular basis. Just don't expect too much to have changed with its horndog hero.