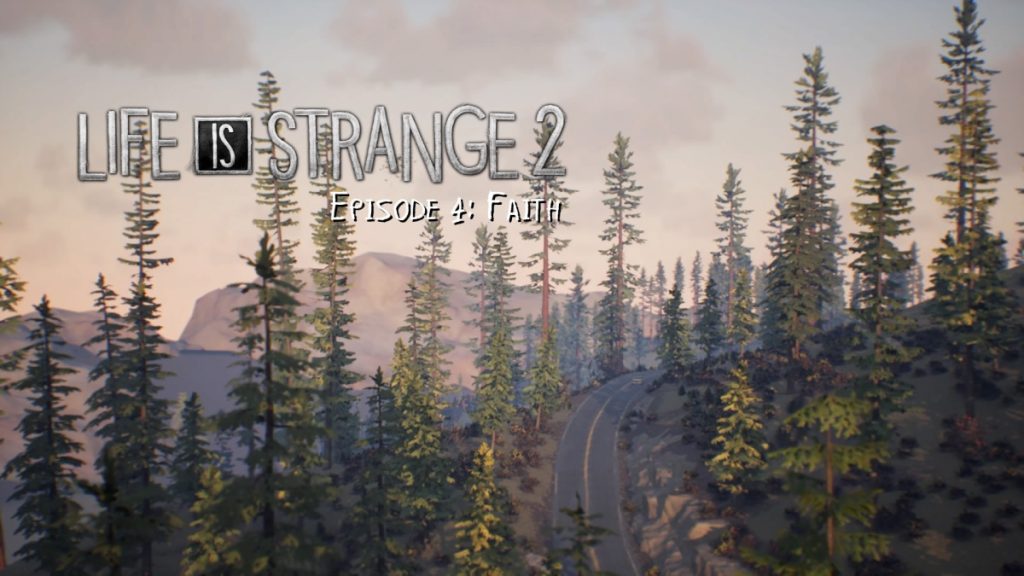 Life Is Strange 2‘s fourth chapter, titled Faith, is available now on PlayStation 4, Xbox One, and PC. The word will have a double meaning by the end of the episode, but it mostly reflects the mantra of Sean Diaz, who will stop at nothing to be reunited with his younger brother Daniel after they were separated at the end of episode three.

Sean has been in a coma for two months and is currently in federal custody. Now awake, he’s dealing with the aftermath and rehabilitation of losing one of his eyes due to Daniel’s latest temper tantrum, which was the catalyst of the boys being ripped apart. A kindly nurse Joey tends to Sean’s injuries and slips him his beloved sketchbook, which had been confiscated by the FBI agent assigned to him.

An armed guard keeps watch outside as he faces being charged with killing the police officer from the first episode, but Sean knows he must find Daniel.

We have no idea where Daniel Diaz ended up after he destroyed the semi-happy weed farm commune they were staying at. Jacob, with whom they worked with at the farm, has left a few cryptic clues in Sean’s sketchbook which seems to indicate that he has taken Daniel to safety, in Nevada. Sean is to be transported in the morning so his escape has to happen soon.

There are several options given to break Sean out depending on your choices. All of them seem unlikely but for the sake of story progression they work and Sean is back on the road once again. He steals a car from one of the overnight nurses just starting their shift at the hospital and heads to Nevada.

If Life Is Strange 2 has taught you anything, you already know that road will be paved with all the ugliness and kindness America has to offer.

Life Is Strange has a way of connecting the player with an emotional attachment to the main characters in a way that will make choices you make as important as if your own life depended upon it. I will do anything to protect or make things better for Sean. As a victim of a cruel present-day America it’s difficult to see him escaping this with a happy ending.

Daniel, on the other hand, hasn’t inspired the same devotion. Part of that is due to the fact that his character hasn’t developed throughout the story. I get that he is only ten-years-old but these boys have faced unimaginable strife that has forced them to mature past their years.

Daniel isn’t written as well as Sean, DontNod chooses to use him as more of a tool to force the boys further into hell instead of showing character development.

If you recall in episode three, Jacob had joined the others at the farm after he escaped a cult. It’s that very cult in Haven Port that he has returned to with Daniel. Haven Port is lead by Reverend Lisbeth Fischer, who thinks Daniel’s telekinetic powers are a gift from God.

Lisbeth is a manipulative leader who preys on weakness to break her followers into submission; if that doesn’t work, the armed guard usually does.

Daniel believes that he must repent for his past sins by using his powers to do god’s work. Lisbeth far from being godly now has a living miracle to push her agendas further down her follower’s throat. She forces her gay followers into conversion therapy, believes science and medicine is the devil and will only welcome Sean if he embraces her ways.

He refuses and tries to convince Daniel into leaving with him, but just like Scientology, no one leaves Haven Port easily. Daniel decides to stay and Lisbeth makes it violently obvious Sean is not welcome.

Brace Yourself, Karen Is Coming

Life Is Strange 2 Episode 4 introduces us to Karen, the boys’ mother who had abandoned them years ago. Karen was warned by Jacob how dangerous Haven Point is, and shows up just in time to help Sean escape a near-death beating from the cult and to help him get Daniel out. This next part is Life Is Strange 2 at its finest as Sean confronts Karen about how she destroyed their family by leaving.

Now, I’m not convinced of Karen’s reasoning for leaving, but she owns her mistakes and is sincere. In my playthrough of Faith, I was probably a lot more lenient as Sean towards Karen, but I just wanted something good in his life. I ended up really liking Karen; she’s a complex character and finally does right by her boys in their worst moment. Needless to say, I hope Karen stays in their life.

It will be interesting to see how the final chapter of Life Is Strange 2 concludes. Even if the Diaz brothers make it to Mexico as they intend, they have seen things you can’t unsee — it’s never going to be a fairy tale happy ending.

My biggest complaint about Episode 4 is that it felt short and sometimes rushed. There’s a lot presented to the player and I’m worried it will be a tough wrap up with just one episode left. Performance-wise, I experienced just a few minor sound and graphic glitches.

Life Is Strange 2 Episode 4: Faith brings back all the feels of the first episode in this compelling instalment that introduces you to the boys' mother and an evil cult that wants to exploit Daniel’s powers. Despite its short length, Faith does an excellent job in preparing for a phenomenal conclusion of the series.