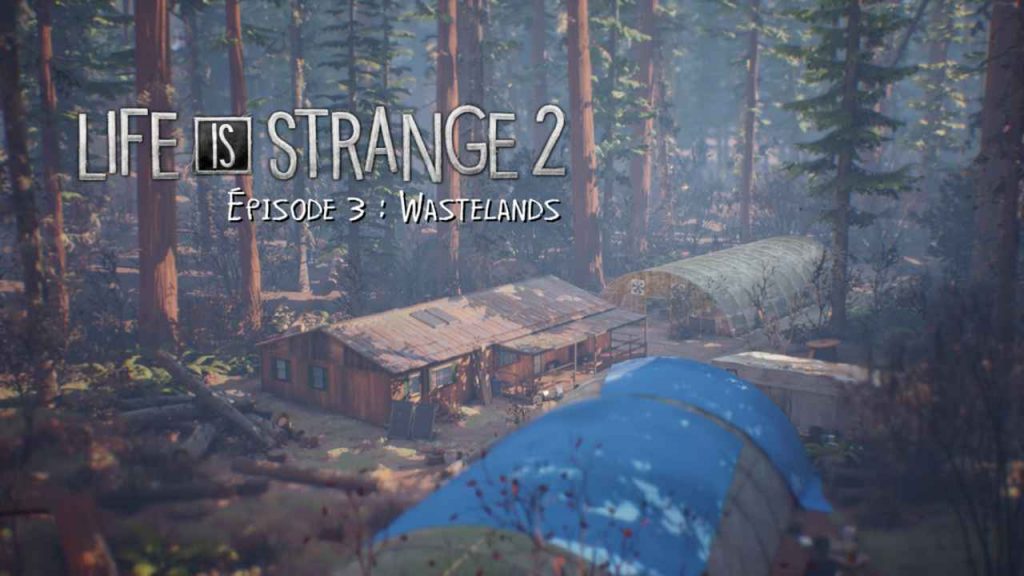 The third episode of Life Is Strange 2 from DONTNOD Entertainment titled Wastelands, finds the story picking up two months after the events of the last installment.

Where the second episode was an intimate narrative of Sean and Daniel dealing with the aftermath of the death of their father in a racially motivated tragedy, the third introduces us to a slew of new supporting characters. While the new characters are mostly forgettable they provide the catalyst for building the rift that is developing between the brothers.

Home for the boys is a makeshift camp in California populated with other displaced souls set up by a guy named Merrill who owns an illegal marijuana farm. Sean and Daniel join the group in working on the weed farm to save money so they can finally get to Puerto Lobos.

Cassie and Finn, who we were briefly introduced to in episode two, are the characters you will interact with the most in Wastelands. Both characters can also be wooed for a potential romantic partner for Sean or you may choose to keep things entirely plutonic. Whichever romantic lead you pursue, all roads lead to supplying the dark turn Life Is Strange 2 takes in straining the relationship between the Diaz brothers.

Sean begins to spend a lot of time with his new friends which makes the younger brother feel left out. Daniel has been honing his telekinetic powers behind Sean’s back despite the strict warning from Sean to not use his gift around others and without his supervision. The tension between the brothers escalates and Daniel’s defiance gets them in trouble with Merrill who fires them and tells them to leave the camp first thing in the morning.

It’s in the last fifteen minutes of the game where things really fall apart. It doesn’t matter what ending you get, none of them look particularly good for Sean and Daniel. The post credit glimpse of episode four seems to hint that things might still get worse for the Diaz’s before they get better. Wastelands being the third episode of five is smack in the middle of the story overall, which unfortunately as a stand-alone episode might seem underwhelming and uneventful at first. After you have had time to process the cliffhanger ending, I think we’ll see that this short episode is actually quite pivotal in setting up the endgame.

Games where the outcome is shaped by choices the player makes always cause me a bit of anxiety. However, I also feel that you should always go with your first instinct as that is representative of your true feelings. The ending I got for Wastelands was the first time I was left unsettled and unsure about my decisions and went back and explored other options.

The Wait Is Killing Me

A major problem I have with Life Is Strange 2 and all episodic games are the long pauses in between chapter release dates. It’s difficult to feel emotionally attached to the characters and events when at the height of the episode’s excitement, it is abruptly interrupted by a four-month wait. With that being said, I’m already salivating thinking about episode four.

Aside from a weird glitch in the graphics that occurred briefly a few times, the game performed almost flawlessly. Once again the voice acting and dialogue are top notch with an equally engaging and brooding soundtrack to accompany it.

I can’t say that I felt Wastelands was overall as powerful as the first two episodes but the climactic ending will leave you speechless. It’s hard to imagine where the story will go from here but I can’t wait to find out. Episode four will be released August 22, while the fifth and final episode will wrap up the adventures of Sean and Daniel Diaz on December 3, 2019.

Life is Strange: Episode Three is available now for PS4, Xbox One, And PC.

Life Is Strange 2 Episode 3: Wastelands is the weakest and shortest installment of the game so far. The dialogue-heavy episode starts slow but finishes strong and sets up a new obstacle for Sean and Daniel with a real cliffhanger of an ending.