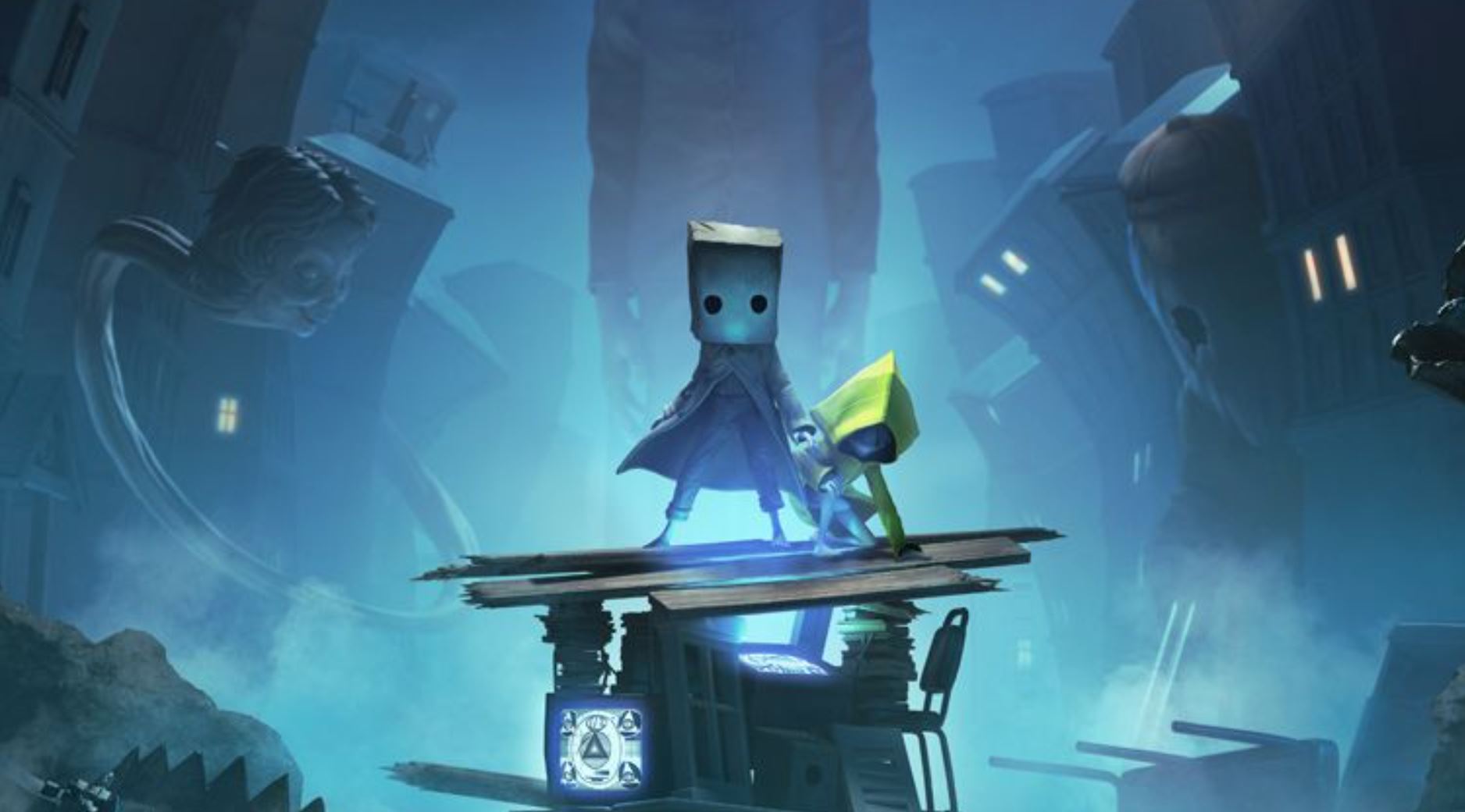 Little Nightmares 2 Review (PS4) – When Little Nightmares released back in 2017 it took the industry by storm with its unique brand of horror and ability to carve out its own spot in the genre with some twisted character designs and scares hidden around every corner.

Well, almost four years later, Tarsier Studios has amped all of that up to 11 with a sequel. Little Nightmares 2 is bolder, braver, and far more bullish than the first outing. It isn’t afraid to shake up the formula, terrify you as you play, and create some stunning sequences that shake you to your core.

Much like the first game, Little Nightmares 2 begins with you waking up in the middle of nowhere, with no idea how you got to where you are. The goal is to keep moving forward as each new challenge is put in front of you.

Before long you will find yourself slowly coming across members of a society that appears to be hypnotised, like drones, performing tasks aimlessly and for no reason. On your journey, you see the various parts of this society, such as a school. You see just what happens in their day-to-day life and get glimpses throughout of just what this society is up to, never really revealing the truth, but hinting at what might be happening. 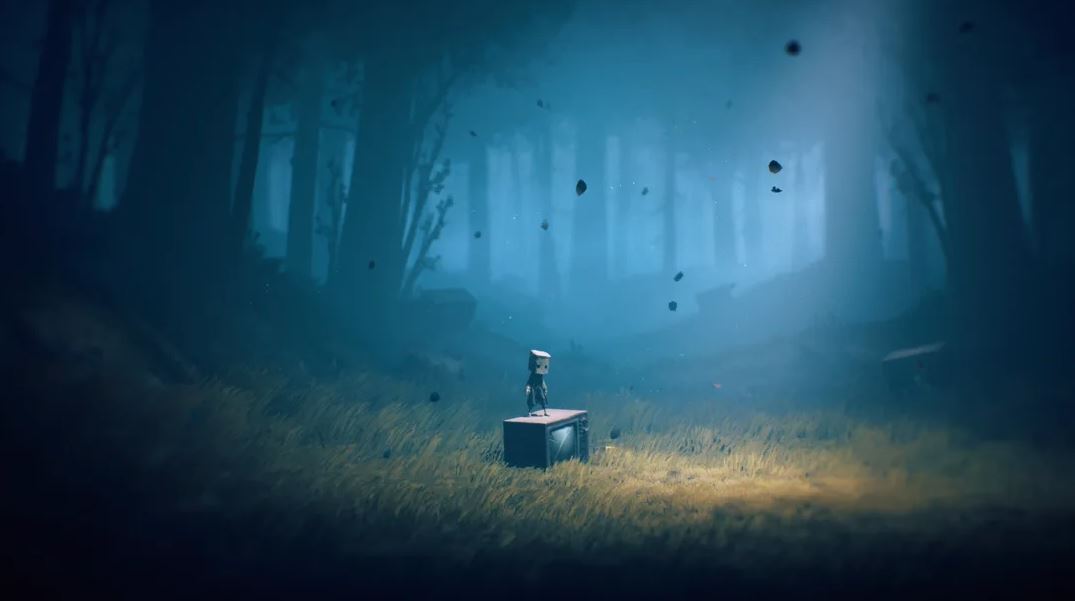 The story takes some turns and is much grander than the first game with twists that get thrown in and far more diverse locales to explore as new revelations are made. The game also does a great job of incorporating these major story sequences with set-pieces and gameplay mechanics that are memorable and unique to Little Nightmares 2.

The final chapter of the game is especially memorable as you use TVs to teleport between locations and have to divert enemies’ attention away all while jumping from platform to platform and teleporting around. This then culminates with three great sequences that are epic, intense, nail-bitingly spooky, and just plain unforgettable.

As with the first Little Nightmares, the real thrills here are the scares along the way as you play through the adventure. The sequel does an even better job of terrifying you, with horrific monstrosities chasing you down and an excellent sense of dread, which is instilled thanks to the excellent wrapping of presentation around the whole experience.

Like the first game, you will come across a variety of humanoid creatures whose job it is to scare you to death and pulverize you until you are nothing but a tiny pile of meat and flesh.

Little Nightmares 2 successfully does this by finding new ways to have these humanoid nightmares interact with you, whether it is a hulking, gluttony-filled man who crawls along the ceiling gargling on meat and bones or a teacher who is able to extend her neck and reach around corners and up to balconies, forcing you to run and hide. Little Nightmares 2 is able to keep you scared with new tricks and innovative character designs and mechanics. Every second near them is tense, terrifying, and trauma-inducing. 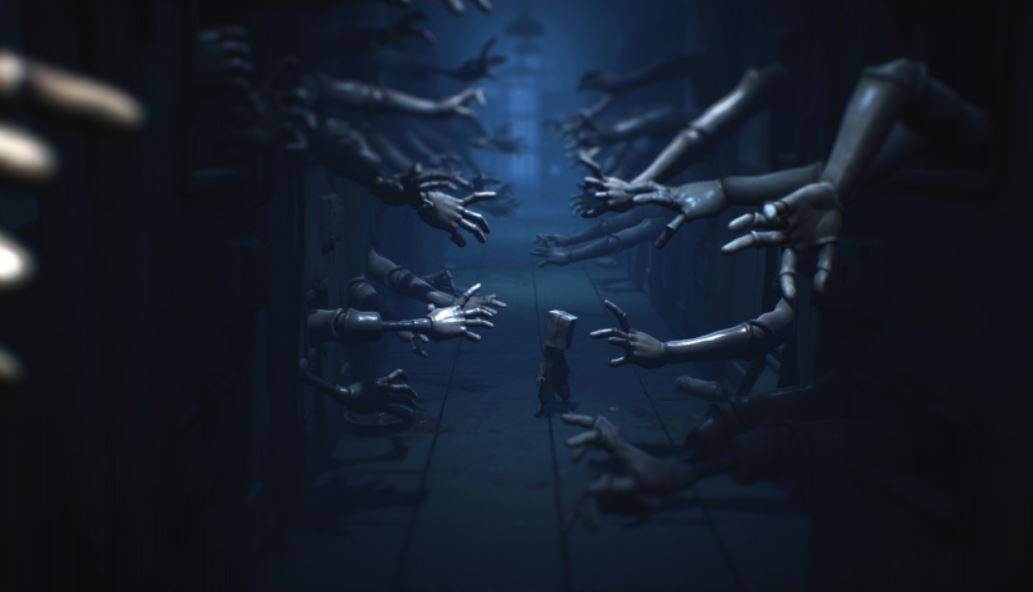 Chapter 2 of the game takes place inside a school and is a captivating hour or so of gameplay, with some great nail-biting escape moments and a bleak and disgusting feel to the goings-on occurring around you. It is probably the strongest chapter of the game overall and shows off everything in Little Nightmares 2 has to offer to the best of its ability.

Other set-pieces are gripping in entirely different ways, such as a sequence where you have to run away from a human firing at you with a shotgun, sliding behind boxes and hiding in mud to avoid the sight of enemies as they scour the swamp for you. It is riveting and these tense showdowns are once again the best part of the series and Tarsier haven’t sacrificed anything when it comes to this aspect of the game. In fact, they have made them significantly more interesting, dynamic, and enjoyable.

This is all brought together with some top-of-the-class sound design and music which is haunting and really captures the tone of the depressing and lifeless world you find yourself in. I specifically played with the sound effects and music turned up and it was one of most cinematic horror experiences I have ever had. Cinematography is also top-of-the-class, with some great visuals sprinkled throughout the adventure. Tarsier has really elevated the presentation with Little Nightmares 2 and created some of the most cohesive horror experiences you will find on PS4.

This whole presentation comes together, with excellent use of lighting and color in the game’s final chapter which is tense, grand, spell-binding, and truly magnificent. I don’t want to go into too much detail as the game is only about five or six hours and you should experience it.

However, there is a final showdown in the last chapter of the game that is a cinematic perfection pulled together by every aspect of Tarsier Studios’ hard work. The sound design, music, visual effects, and gameplay here are all impeccable. It might be one of the best moments I have played in years. It truly is remarkable. 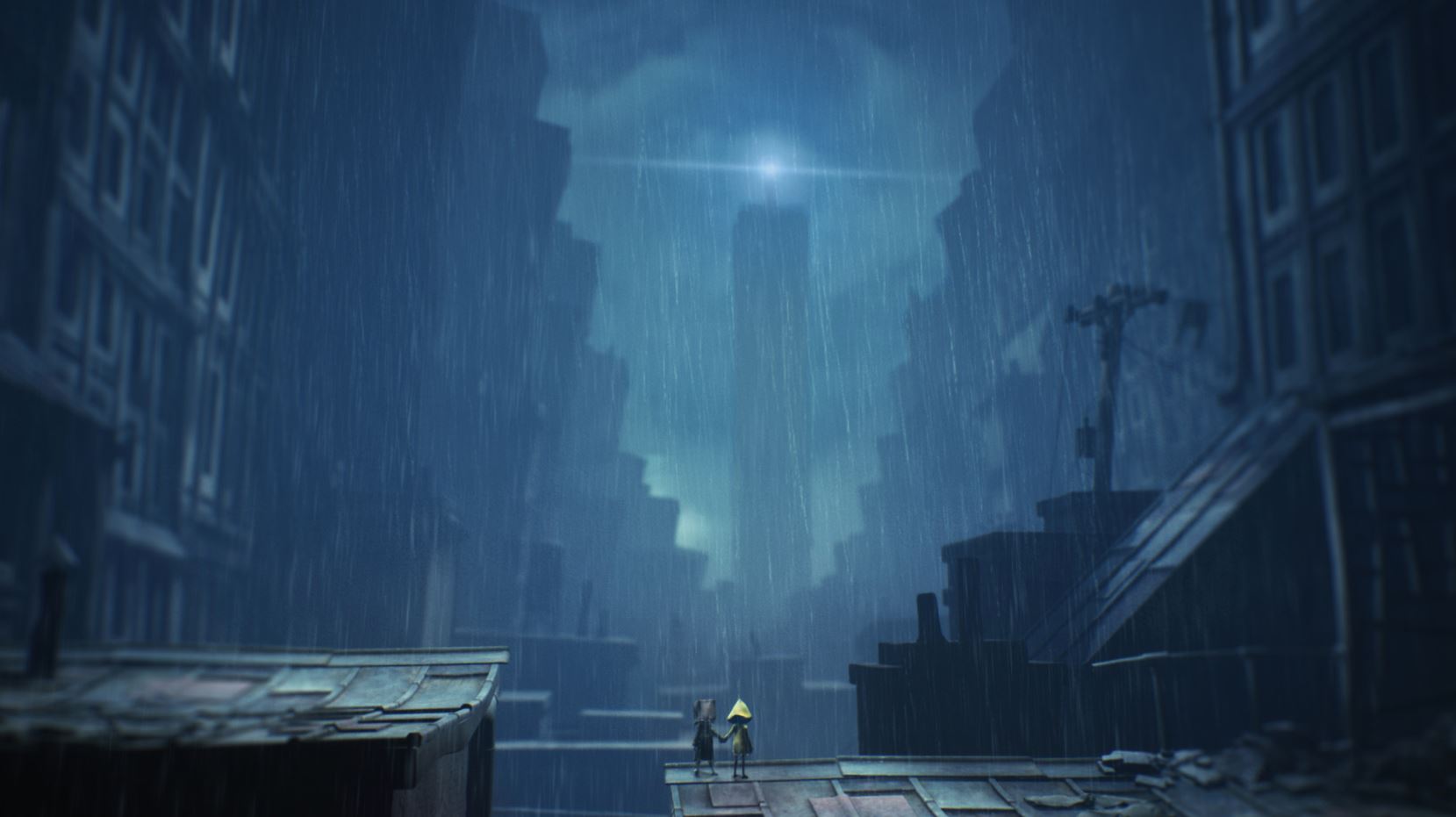 Despite all the great atmosphere work and scares, Little Nightmares 2 wouldn’t be itself without the platforming and puzzles to compliment Tarsier’s work elsewhere.

Once again Tarsier has created some great platforming sections and puzzles to go along with them. The core remains mostly the same from the first game with you collecting keys to open locks and climbing and jumping, occasionally moving objects around to assist in doing just that.

About 75% of the game is spent with a companion and they assist you by catching you as you jump from a distance and can be brought along with you by holding their hand, instead of them acting independently. Although, I never saw any reason to do this. 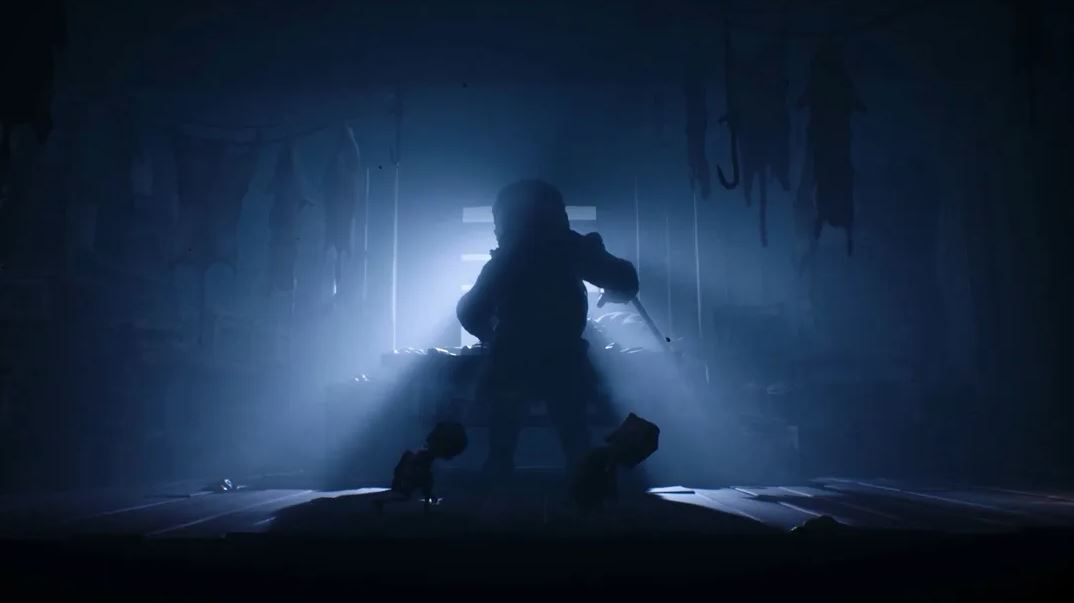 Married with those platforming sections are some fantastic chase sequences which are tough and tight, requiring precision and accuracy in your jumps and movements These chase sequences are used in new and unique ways with the abilities your foes have. For example, one has you running through vents while the previous mentioned long-necked Teacher squeezes her head through the metal and chases you down.

New mechanics are also constantly introduced, such as a section of a Mental Hospital which asks you to focus your flashlight on mannequins to stop them chasing you down in the dark. It is straight out of Doctor Who’s episodes with the Weeping Angels and it is far more tense and scary in Little Nightmares 2, thanks to the presentation and sound design mentioned above.

There are also hats to collect and equip for cosmetic purposes, with other collectibles hidden around the game’s levels. I walked away with about 20% of them and I thoroughly explored, so they are certainly a challenge to find.

But, there is one part of Little Nightmares 2 that doesn’t quite hold up to the excellence of the package. Light combat has been added to the game in the form of picking up heavy weapons and slamming them on the ground to destroy enemies or pulverise foes. 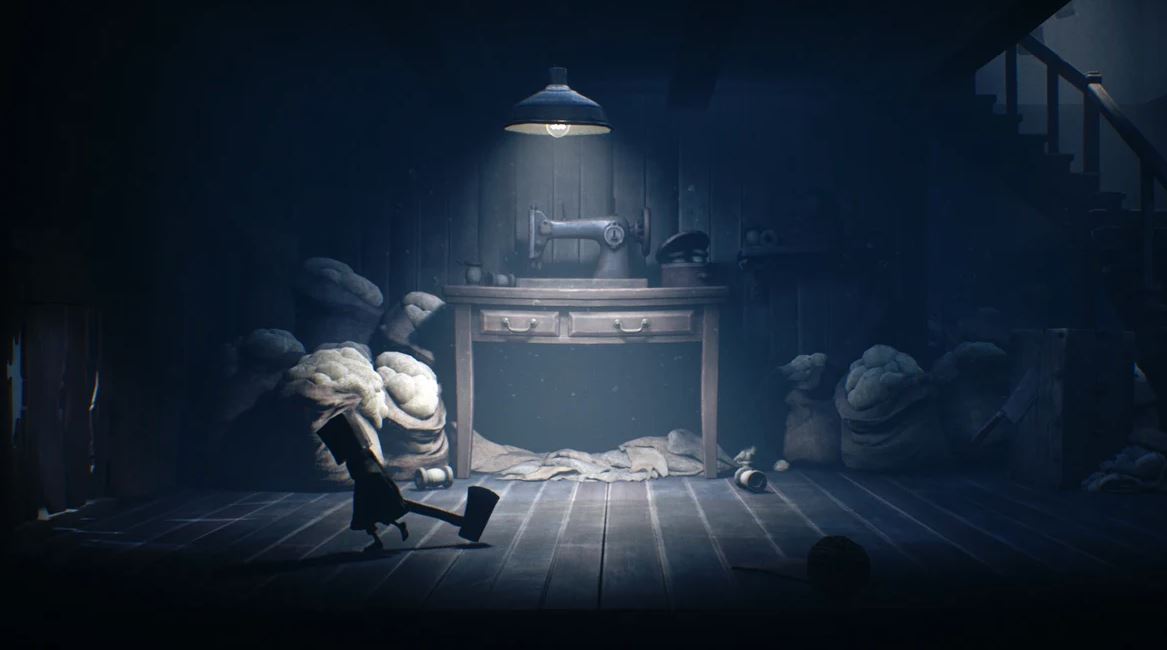 It is nothing overly complex and is effectively just “get close to the enemy and hit the cross button to slam the weapon on them”, as they die in one hit. However, while it works about 75% of the time, the camera perspective can make judging distance from enemies behind you tricky as you aren’t able to discern how much range your weapon has. It wasn’t a huge problem, but it happened enough that it irked me. But, on the whole, I actually really like the addition of combat to help vary up the combat, especially as Little Nightmares 2 is about 50% longer than the original.

Little Nightmares 2 feels like a true sequel that improves upon the original and makes everything bigger and bolder. The meshing of all the elements of game design is truly impressive and creates some cinematic moments that are masterworks – paintings that cannot ever be touched or tweaked and are perfect how they are.

The scares are amplified, the environments diversified, and the gameplay heightened to create one of 2021’s first must-play games and an experience that captivates and engrosses with every single pixel on the screen. To put it simply, Little Nightmares 2 is Tarsier Studios’ best work.

Little Nightmares 2 is available now on PS4 and is playable on PS5 via backwards compatibility.

Little Nightmares 2 is a game that pulls together every aspect of a game's presentation and pulls it off miraculously. Everything here is amplified from the original and moments feel like true cinematic wonders, unlike anything you have seen before. Combat doesn't always work, but the whole package is truly impressive and a showcase of the talent Tarsier Studios possess.