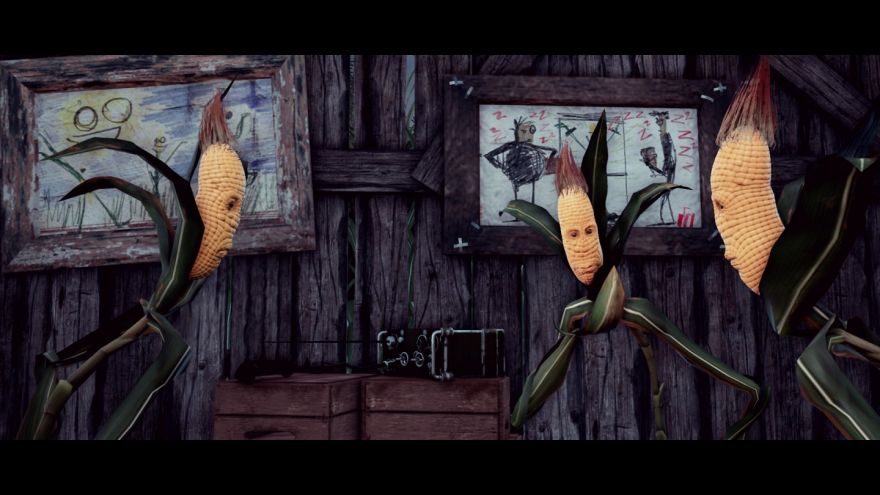 As my mystery character wakes up in a maze of maize and a group of sentient corn scuttles off, I wonder what I’ve gotten myself into. Is Maize set to be a disappoint-maize, or will it be a-maize-ing? Stop now, if you don’t want any more puns.

There’s a lot to love here, particularly when it comes down to pure originality – I mean, sentient corn? A Russian teddy bear named Vladdy? English muffins? I’m listening. The weird is my playground. Is it wonderful though? My ancient brain always reverts back to Myst when a puzzle adventure game lands in my lap, and forever sits as the benchmark which pushed the genre forward back in the 90’s. From that perspective, let’s look at what Maize does right. For one, its atmosphere hits the mark. While it’s certainly a humorous experience in many ways, it is also incredibly unsettling – from the diegetic, minimalist soundscape of rustles and whirs to stuff like this: 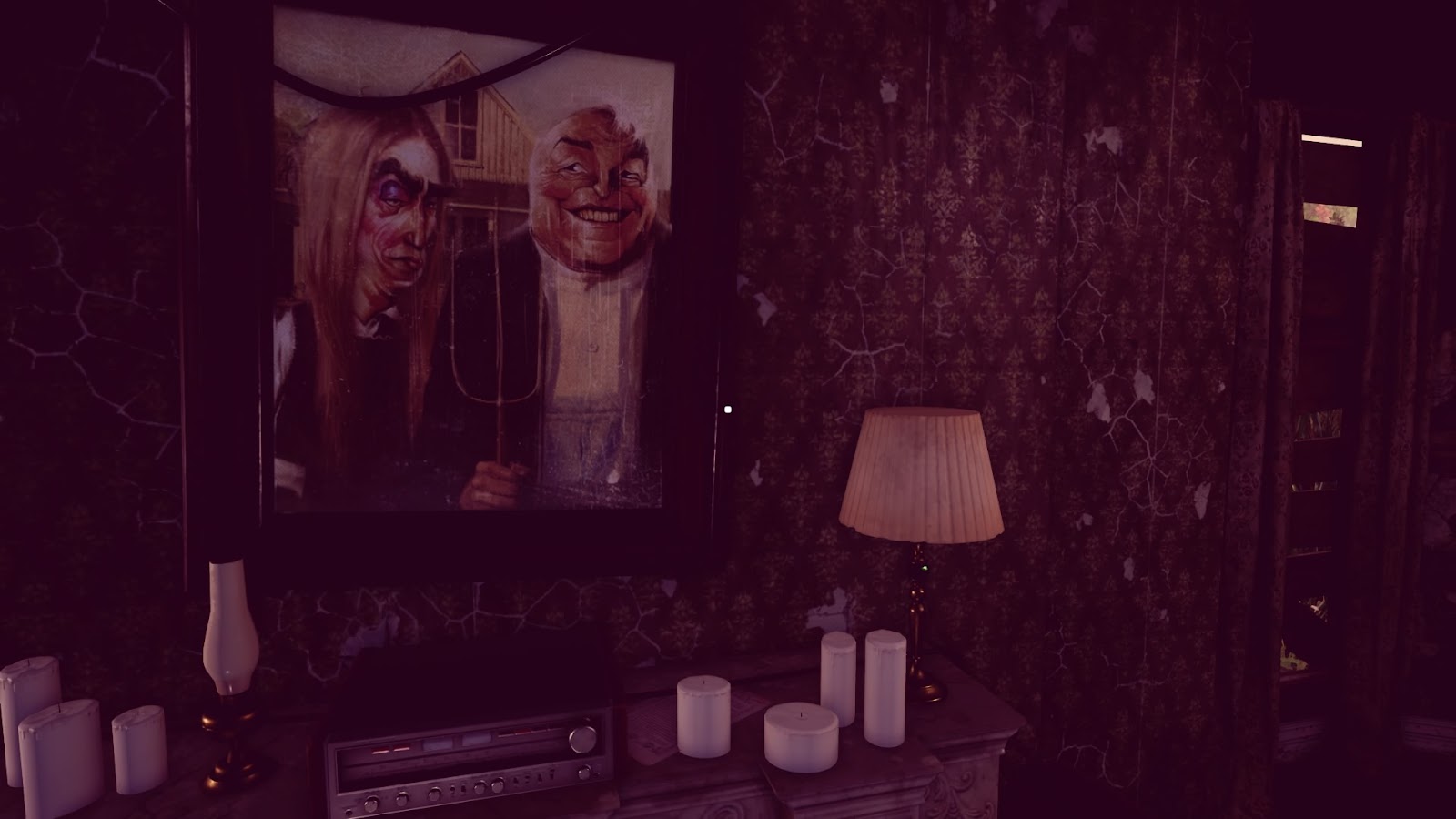 Get me the hell outta here! That’s terrifying, right? But it’s great that it is – it certainly evoked a physical response, the ‘Christ on a bike!’ kind. You soon discover that these are the two ‘scientists’ behind the creation of sentient corn, thanks to a misinterpreted memo from the US government. No Nobel Prize winners here… Honestly, this painting asks more questions than are answered and that’s probably for the best. As you can see, Maize carries a striking visual art-style with seriously impressive corny corn. No, I mean corny, like, seriously corny looking corn…horrifyingly good corn! You know what I mean. Hopefully.

In Maize you are treated to corn encounters of the third kind and interactions with Vladdy who, quite frankly, isn’t the most motivational chap. Kinda wanted to slap the little guy for incessantly insulting my intelligence. Maize’s self-aware, dark humour carries the player through from the word ‘go’. In particular, via brilliantly scripted text based narration that’s attached to folio and useable inventory ‘garbage’, as Vladdy would say. The barmy ‘garbage’ in question ranges from an English Muffin to a Sweaty Headband; awful spy novels to Fabergé eggs, and the most expensive lockpick in history! This narration not only describes what’s in front of you, but the actions your character takes after picking up the item in question and your thought process. You get to know you, but realise quite quickly that you’re not exactly the sharpest tool in the shed. Oh! And you have a solid, sedimentary relationship with…rocks. 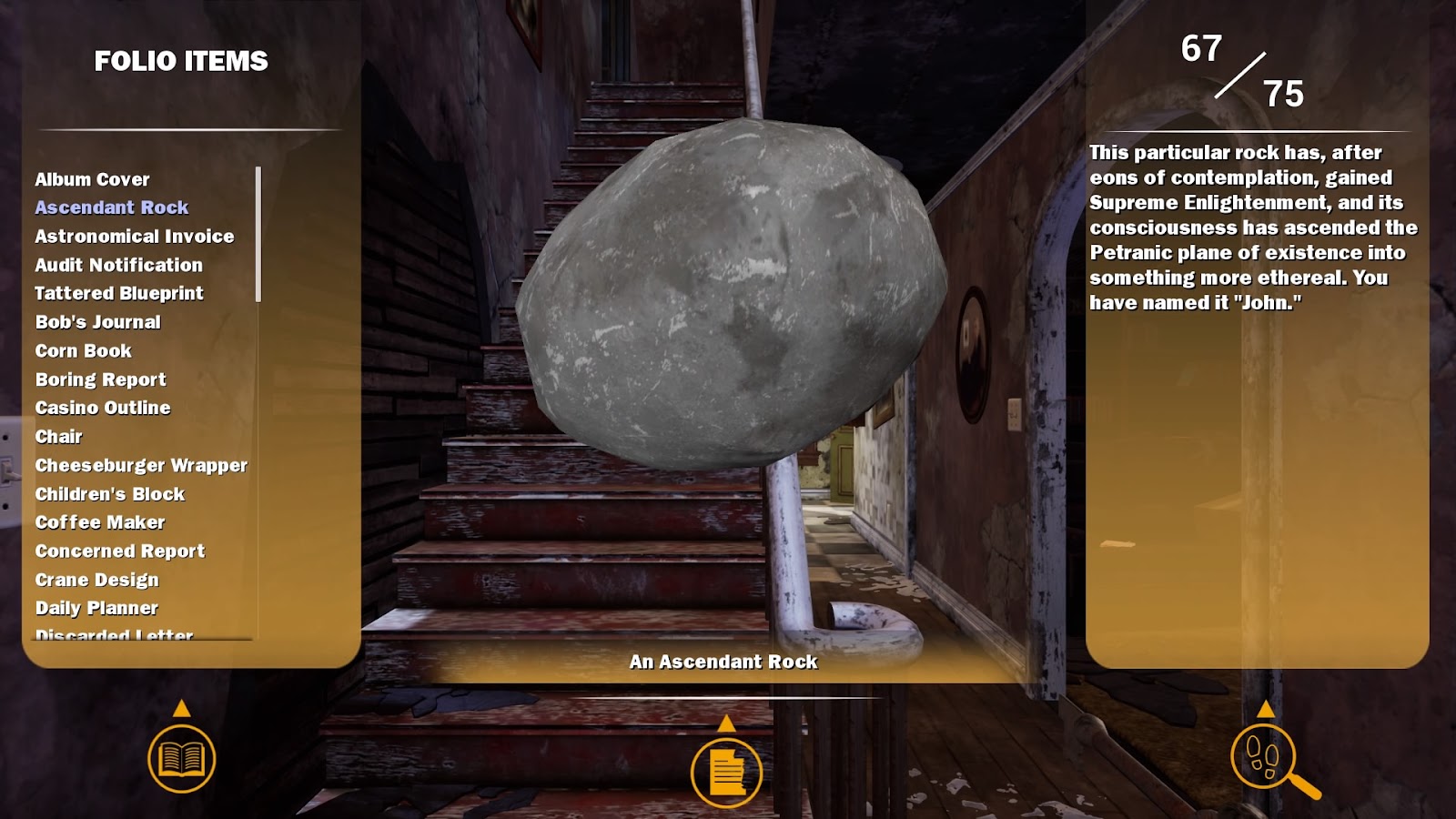 The thing you did was important, probably.

Where Maize so far has gained a bunch of Myst points, it loses a few in its puzzle design and linearity; lacking the same level of originality as the core idea of Maize itself. Myst wasn’t perfect, but what I’m getting at here is that it didn’t have an identity crisis. It was an adventure/puzzle game, plain and simple. Maize, mechanically, is a little confused. Exploration is limited to specific areas as you progress, setting you on a very linear path which gets roadblocked with orange boxes. This alone, isn’t necessarily so bad and does reflect an aspect of the narrative – the corn guiding you, in a sense. Another factor is that your character seems to be a few biscuits short of a packet and could probably use the assistance.

The hand-holding continues, however. If you bring up the description of a useable item, nine times out of ten it will tell you exactly where to put it (not like that!) and when you’re in said specified location, highlighted placement outlines pop up leaving no scope for critical thinking. Suddenly, it flips sporadically into the observational puzzle you’ve been hoping for! Although when it’s no longer an obvious walkthrough, this takes you aback. Oh dang, I have to work this out myself? I got so used to not thinking! Oh, if I only had a brain… 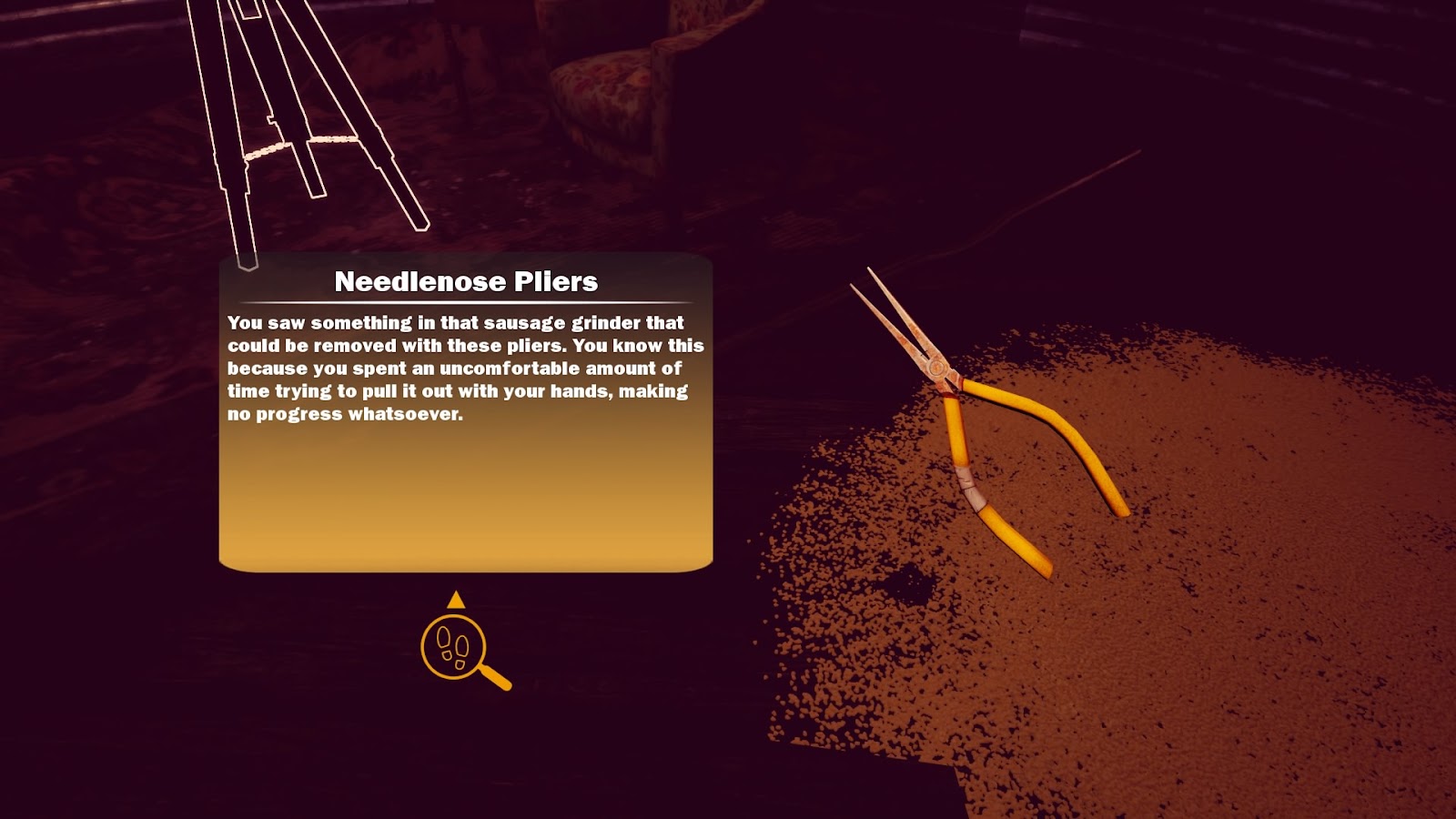 With this in mind you become unsure if Maize truly intends to be a puzzle adventure game or Stanley Parable-esque interactive fiction. The puzzling elements are overly satirical and likely seeks to parody the puzzle game; while humour is Maize’s strong point, some of this doesn’t always quite land if that’s the case. The interactive fiction elements are far stronger than the puzzles and why Maize is definitely worth a go. Some serious world building takes place in the ‘poorly planned’ Research Facility – smattered with post-it arguments which remind you of your student fridge, featuring back and forth between the scientists; a corny recording studio, the crazed motivations of other staff members in journals or memos, and of course your own path of self-discovery. With just a little gameplay clarity, Maize could be one of the best adventure puzzlers – or pieces of interactive fiction – available. Maize doesn’t take itself seriously by any means, so you shouldn’t either. Don’t expect sophisticated puzzles and enjoy the absolutely absurd tale presented to you. Why not eat some popcorn while you play? Get into the mood, get your corn on.

Maize is an 80's Spielberg movie on crack. That is all.