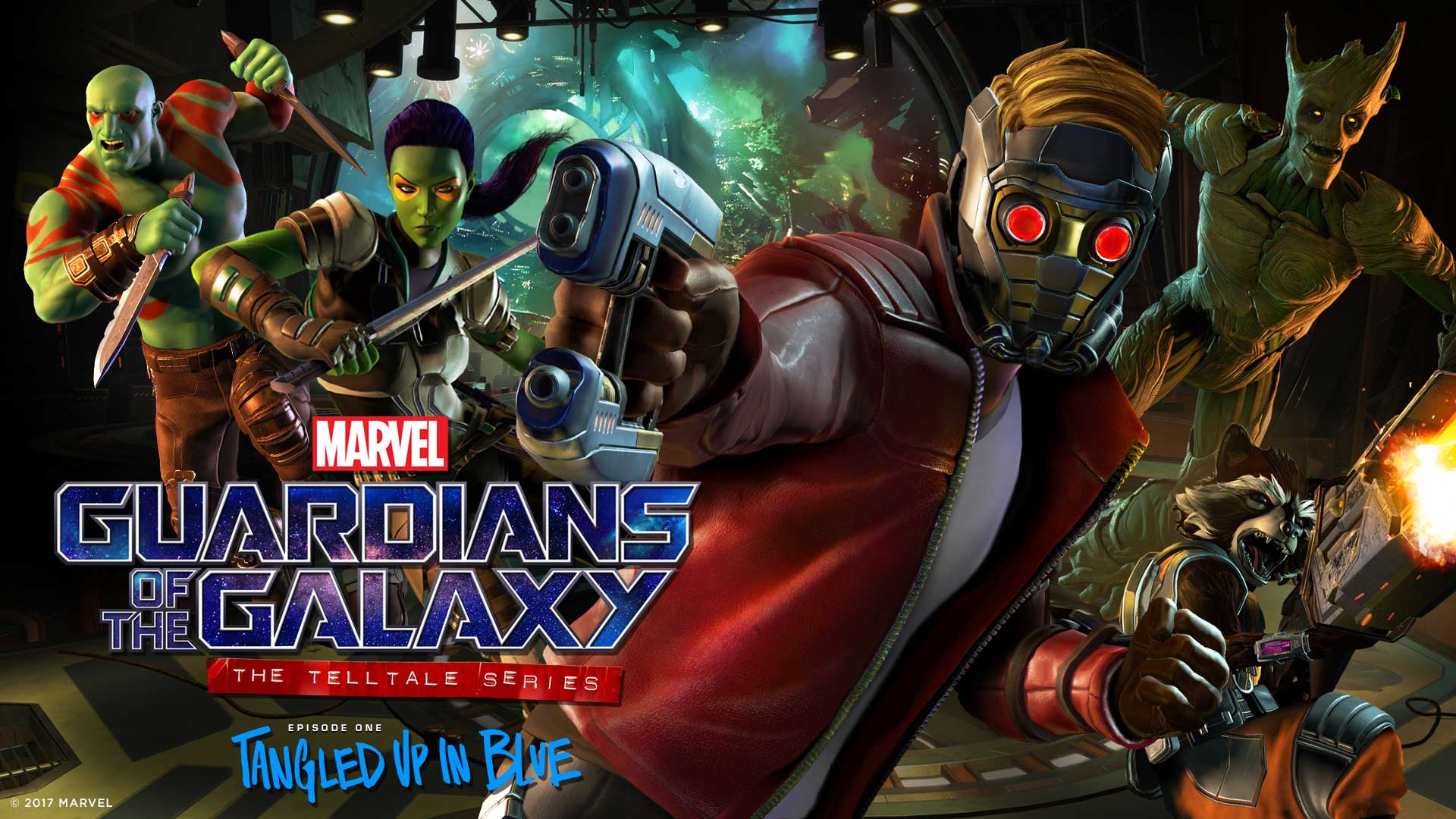 Marvel’s Guardians of the Galaxy: The Telltale Series, Episode 1: ‘Tangled up in Blue’ review


Though the Guardians of the Galaxy has been around in comic form for nearly 50 years, the general populus only just recently fell in love with Star-Lord, Gamora, Drax, Rocket, and Groot when the 2014 Marvel film made waves the world over. Now with the sequel ready to hit cinemas in the coming weeks, Telltale Games is taking advantage of the hype by partnering with Marvel for their own spin on the quintet’s journeys through space.


It is important to note going in, however, that the story told in this game is connected in no way to the Marvel Cinematic Universe. The characters are the same ones you know and love, full of quips and quirks, though stylized in typical Telltale form. It’s not quite the comic-style cel-shading seen in past titles like The Walking Dead or Tales from the Borderlands, but the team still does an excellent job at making colors pop and giving known characters unique traits.


Sadly the introductory episode in this new series falls a bit flat, serving mostly as a way to set up the four episodes to come. None of it is bad, but aside from a few solid one-liners (which, to their credit, managed to get legitimate laughs from me), the experience was mostly pretty boring.


The battle segments feature Telltale’s tried and true quick-time events, which aside from a glorious season-closer in Tales from the Borderlands, haven’t felt fresh or interesting for several years now. It’s nearly always just a few swipes up or left, tap X, tap Square, tap Circle, swipe up again, and the battle is done. There’s a little more added in here with rapid-firing Star-Lord’s guns with the controller’s triggers, but the auto-aim makes that addition feel superfluous and unearned. Even just making it so that we had to aim at the targets to successfully proceed would add a hair more depth to those moments, and make them feel slightly more worthwhile. As it stands, this game would be better off taking the “visual novel” route and being purely cinematic save for the decision-making. At least then the battles would feel more fluid and punchy.

That said, there’s a bit where the battle shifts your control rapidly between all five members of your party to deal out attacks from all angles, and that is actually a brilliant moment that would be lost without the player-controlled battles. If I sound conflicted with the point I’m trying to get across, that’s because I am. This isn’t a new feeling, as Telltale frequently makes me feel confused, not knowing entirely what I want, when instead I should wrap an episode and say, “THAT. THAT is what I wanted!”


Another reason Tangled Up In Blue falls a bit flat is because none of the decisions you make feel like they carry much gravitas. Granted this is only episode 1 of 5, so there are plenty of opportunities for this to chance in the coming months, but for now there is only one choice that feels “major,” and I had no problem making my decision. No internal dilemma, no hemming and hawing. I knew what I was going to do, and I didn’t second-guess myself afterward. Generally if there’s one thing Telltale excels at, it is making you feel like your decisions carry real weight, but that just wasn’t the case this time.


It is probably worth stating that this is not a bad game at all. The gameplay runs smooth and glitch-free on my PS4 Slim, and the voice acting – while jarring at first when expecting Chris Pratt or Zoe Saldana – is simply grand. The cast is all in top form, and breath the kind of life into the characters as superbly as you would hope. There is one joke in particular that I thoroughly enjoy, when Rocket (the ever-wonderful Nolan North) is talking about his unfinished-but-definitely-going-to-be-amazing gun. He proudly states that, “This gun isn’t fully operational, and it’s only got one shot.” before adding with a smirk, “Think of it like a feature!”

Jokes aside, the rest of the writing is aces as well. Gamora and Quill (Star-Lord) feel less like an inevitable couple and more like a brother and sister, which in my book is much better. They’re companions in that they’ve always got each others’ backs, whether on the battlefield or in need of personal advice, and those moments when you can choose to break Peter’s cocky sarcasm-machine nature and have a bit of real talk feel intimate and important to their development, and I’m excited to see this relationship develop further.


If only the rest of the story felt as simultaneously deep and meaningful and entertaining as all that, I would be all in on this series, but for now it feels incomplete. Perhaps this makes perfect sense, as it is only one-fifth of the series overall, but such is the nature of episodic reviews. There is much potential for Telltale to grow their personal brand of Guardians in episodes two through five. Let’s hope they take advantage of it and make them as beloved as their silver-screen counterparts.

Guardians of the Galaxy: A Telltale Games Series kicks off with a mixed bag of feelings. The episode is funny but boring, touching, yet unrefined. The gameplay is slick, but the quick-time events are a chore. It flips and flops between ‘intriguing mystery’ and ‘mediocrity at its okayest,’ but there’s plenty of room to get better. Now that the stage has been set, I am ready for episode 2 to go the distance.

Guardians of the Galaxy: The Telltale Series