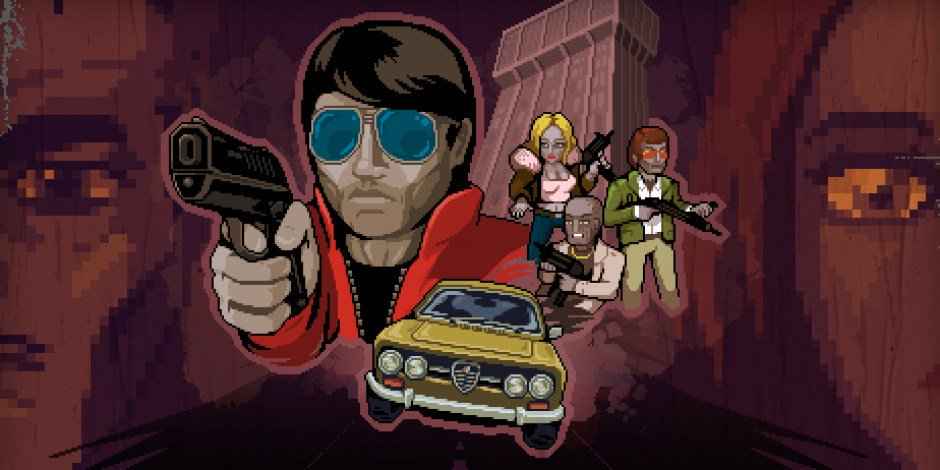 If there’s one thing we don’t have too much of right now on PS4 it would be top-down arcade shooters that are set against the endlessly fascinating background of Italian 1970s gangster noir. To address this seemingly egregious oversight Italian developer Italo Games has brought us Milanoir, a top-down shooter that is clearly inspired by that aforementioned and deeply cool genre of films – it’s just a crying shame that the execution leaves so much to be desired versus its otherwise endlessly compelling concept.

Milanoir Review: An Attractive Though Poorly Constructed And Infuriating Shooter

As a typically grizzled hitman who goes by the name of Piero, Milanoir’s plot contains many hallmarks of Italian noir cinema that would serve as the building blocks for Quentin Tarantino’s own particularly hip brand of film-making. Certainly, when it comes to Milanoir’s story, fans of Italian gangster cinema will find something to love here as the narrative is generously stuffed with masses of murder, gang power plays, lots of colorful language and a fair number of stylish looking red continental scooters.

As Piero, you actually play a fairly horrible and one-note character devoid of morality or remorse, and as such, it feels difficult to root for him or even to truly enjoy playing him. He's not an edgy antihero or a cool vagabond, he's just a murderously obnoxious jerk with precisely zero redeeming qualities, yet he still fits into Milanoir’s world of nihilistic delights with ease all the same.

At the very least, Milanoir is nothing if not stylish and the 16-bit pixel art visuals and jazzy soundtrack both do a commendably good job of reinforcing its Italian, late 70s noir overtones. Where things start to plummet downhill however, is pretty much everywhere else because the execution of Milanoir’s heady concept leaves a lot to be desired.

Any top-down shooter worth its salt essentially lives or dies by the state of its aiming system and with that in mind, Milanoir absolutely leaps into the nearest river with cinderblock feet and a pin-free hand grenade stuffed in its frothing mouth. Simply, the aiming mechanic in Milanoir is atrocious and this is in large part owed to the fact that aiming is done via a wandering crosshair (think a mouse cursor painted like a target sight) and naturally has a whole host of real problems in trying to lock onto the target that you want it to.

Nowhere are the failings of Milanoir’s aiming system more keenly apparent than in the car chase that occurs at the end of the first chapter where you are tasked with both driving and attempting to shoot an enemy vehicle at the same time. As you might well guess this is horrendously frustrating because your enemies move so quickly which, when combined with your own movement, makes it nigh on impossible to pull off a decent shot. Worse still the fact that not only has your character seemingly forgotten how to target lock when it comes to vehicles, but everything does so much damage to you in this section that you are literally chewing on your fist with each and every swiftly met failure (and there's no difficulty swap either).

What is especially frustrating with the combat in Milanoir, is that it actually does show some glimmers of promise from time to time. A handy cover system allows you to duck behind cover to evade enemy fire, while cool, insta-kill ricochet shots can be pulled off by taking shots at handily placed street signs. Additionally, you can also get different finite use weapons such as Molotov Cocktails and a Dirty Harry six-shooter that when used can shoot through enemies and cause time to slowdown for a series of stylish kills.

Making this whole situation somehow worse is the fact that Milanoir seems to have a fetish for cramming you into encounters where you don’t have much room to move and where waves of enemies just continually rush you, which when taken in tandem with the abominable aiming system honestly made me want to scream, or at the very least jam some rusty spoons into my ears. Now this wouldn’t be too much of a problem if Milanoir let you engage in some old fashioned melee violence with your enemies in the style of Hotline Miami or something similar, but you guessed it, it doesn’t which makes the whole affair feel desperately restrictive to say the least.

If that wasn’t bad enough, the shortcomings of Milanoir’s level design rears its ugly head yet further still as you very often find yourself thrust into IMMEDIATE DEATH situations where you are rushed by furiously attacking enemies as soon as the level starts and thus giving you little chance to survive, or worse still, boss fights where to progress is literally a case of trial and error rather than relying on any kind of skill or use of an obvious game mechanic to get the job done.

Oh, and before I forget, there is the occasional insta-fail stealth section which is made all the more intolerable by the fact that your enemies have no defined cone of vision so it is impossible to tell what breaks their line of sight and what doesn't. Quite honestly, the stealth sections just don’t feel like they belong in Milanoir, and the lackluster execution does little to convince me otherwise.

In terms of replay value, Milanoir doesn’t offer much to keep players engaged once the two to three hour story mode has been beaten. With nothing in the way of secrets or unlockables to collect in the campaign, only trophy hunting and a perfunctory arena mode remains to keep you interested – though the poor aiming system soon ensures that you spent very long at all playing about with the latter.

Finally, Milanoir also supports local co-op play so that you can take a friend along for the ride in the story campaign, but quite honestly, the addition of such functionality hardly acts as a cure-all for the game’s many maladies as bringing an extra player along only serves to make some sections of the game slightly easier, rather than anymore fun than they were before.

Make no mistake – I wanted to love Milanoir, I really *really* did as the setting is sublime and the audiovisual presentation was impressive in the early going. In the end though, the only thing I wanted to do was turn it off and play something else because my sanity was at stake simply because Milanoir is just far frustrating to be any real fun.

If you enjoyed this Milanoir review, why not take a peek at some of the cracking indie games you can get for your PS4 in our handy feature.

A great concept that summarily misfires on all cylinders, Milanoir is an admittedly stylish retro shooter that is simply too frustrating and poorly designed to recommend.