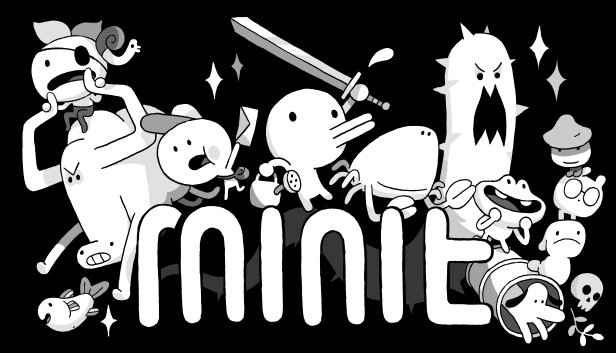 As my duck-faced protagonist sprung into monochromatic life, I directed this odd little creature out of his house (more of a bungalow really) and down past a field where he discovered a mysterious sword laying idly upon the grass. Upon finding this fated blade a particularly cruel curse falls upon our diminutive hero; after one minute expires he dies and then subsequently respawns at his last save point, the caveat to this strange fate being that all of the items he has collected beforehand also survive death too. And so Minit begins, following a path that defines it as a beautifully compact and intricately designed action RPG which ends up providing far more entertainment and blissful fun than both its modest price tag and visual presentation might otherwise suggest.

On the surface, the coalescing marriage of influences that helps define Minit is clear from the get-go. A top-down action RPG very much in the mold of the NES Legend of Zelda games, Minit complements this nod to gaming’s past with a similarly elderly ZX Spectrum style visual presentation before saturating the whole thing with the repetitious rogue-like theme of something akin to Groundhog Day. It’s an odd convergence for sure, and yet, despite its seemingly disparate components, Minit doesn’t just work, it really works.

The primary genius that emerges from Minit’s design is in just in how well it deftly paces itself. Because you are only alive for a maximum of sixty seconds at any given time the developer has has to exercise a laser-like focus on what you are able to accomplish within that small window of time. As a result, there is no fat on Minit. In fact so lean and muscular is its tightly-contained offering that a broad gameplay overview trailer has been attached to this review rather than the usual gameplay videos for fear of spoiling any of the neat surprises the game has in store.

Of course, riffs on the whole ‘game done quick’ idea are nothing new in and of itself. On PlayStation platforms (specifically the PSP) we’ve had the likes of Half-Minute Hero as a point of comparison for example, but whereas those games are little more than accelerated dungeon crawlers that feel like they’ve snorted a line of crack, Minit instead provides a real narrative framework of cleverly constructed puzzles and environments that require you to think, rather than just carve your way through legions of foes.

In large part, progression in Minit is dictated both by the items which you discover and collect throughout the game, and also those which you obtain for other folks. A cup of coffee might, somewhat implausibly, give you the ability to push blocks out of the way and thus open up new areas, while helping out a stranded person in the desert might result in them providing a special set of gloves allows you to cut down trees which in turn permits you to reach locations that were previously inaccessible. In this sense, Minit feels like it folds pages from the Metroidvania playbook into its already kaleidoscopic array of gaming influences, and yet despite the seemingly haphazard mish-mash of genre design, the developer pulls it off and maintains a consistent caliber throughout.

Though Minit is invariably all about quick-loop puzzle solving, conversations and combat, it’s encouraging to discover that such a frenetic approach also extends to the graceful way in which the game deals with player failure too. Once the minute is up, (you can opt to end the minute prematurely if you like and instantly respawn with no delay whatsoever), our hero will perish only to wake up at the last point he saved at, and really it’s here, when you realise that these sanctuaries are literally less than sixty seconds apart from one another that you begin to truly appreciate the pin-point engineering of Minit’s design and superstructure.

Where Minit does some of its best work however, is in how subverts the sixty-second structure around which the entirety of its experience is built around. For example, in one situation, you might need to speak to an old man to divine the location of some secret treasure, however, because the fella speaks so slowly (and takes forever to get to the point), you need to ensure that you get to him quickly enough that you don’t die before the conversation has yielded what you’re looking for. And this is the other thing too, for a game that deals in such humble morsels of time, Minit is quite generously stuffed with secrets to discover as you’ll frequently discover hidden treasures and new areas through nothing else than just sheer curiosity.

Ostensibly, one of the biggest contributing factors to Minit’s endearing charm is its audiovisual presentation. With visuals that look like they’ve been transplanted from a ZX Spectrum (think fellow Devolver Digital title Downwell if you’ve never owned a Speccy), Minit is all about stylish monochromatic sprite and background work that, in addition to liberal use of black space, come together to create a game that looks earnestly retro but yet has enough of its own charisma and charm that it’s able to stand tall aside from its obvious aesthetic influences. Likewise, when it comes to the music the developers have again reached back into history as a relentlessly jovial and bubbly chiptune ensemble serves as the soundtrack against which Minit’s sixty second odysseys play out and proves, much as the visuals, that Minit has charm by the absolute bucket load.

Perhaps the only issue with Minit is that it ends all too quickly, and while its budget price point does little to reinforce a notion that the game is a sizable escapade, one cannot shake the feeling that making the game any longer than it is would be to its ultimate detriment anyway. In the end, Minit does the improbable; it somehow manages to combine and wrap a wide range of gaming influences around the sort of concept that initially seems only fit for a throwaway mobile title, and not only does it pull the whole thing off but Minit also ends up delivering one of the most wonderfully compact and densely fun action RPGs of the year so far in the process.

You’ll struggle to find a more earnestly charming and enjoyable yarn than Minit.

If you enjoyed this Minit review, why not take a peek at the other great indie games available for PS4 in our best indie games feature.

Minit is fresh and unrelentingly charming little action RPG that does more with 60 second bursts of gameplay than bigger budget efforts manage to do with 60 hours. If you're after something truly unique, Minit should be your next stop.