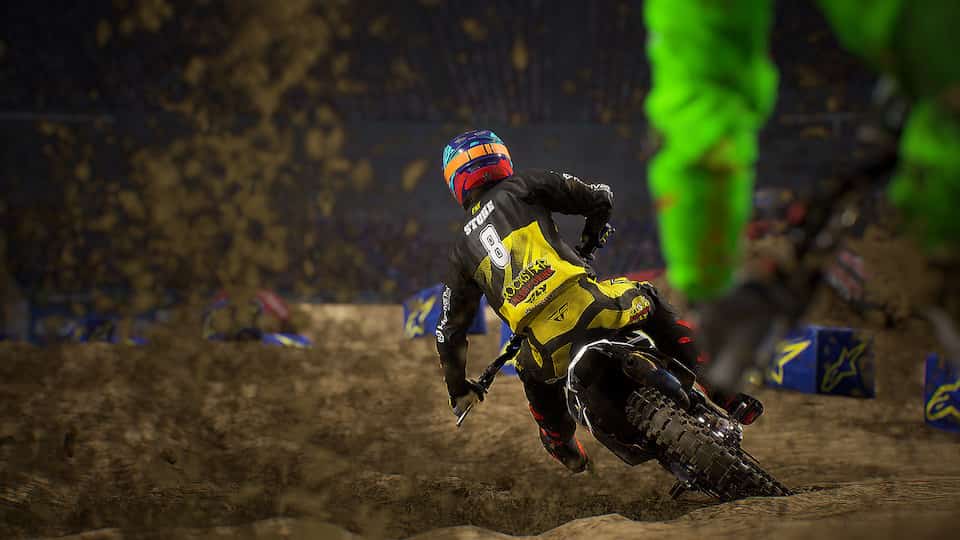 With two Supercross games under its belt, one would think that developer Milestone would have this whole Supercross thing weighed off by now, and with the arrival of Monster Energy Supercross – The Official Videogame 3 (that will be the only time you see the full title in this review because I would fear for my sanity otherwise) that statement is assuredly true as the Italian developer has turned in its best take on the muddy motorsport to date.

For those both familiar and unfamiliar with the previous Monster Energy Supercross games, the across the board improvements will certainly prove welcome. For a start, bike traversal, air and impact physics have all been revamped. Now, when you take a massive leap off of a dirt hill and stick the landing, it really feels like you’ve done just that and the feeling of accordant satisfaction is palpable as a result.

The newly invigorated physics extend to the handling model, too. As you aggressively bank around corners, the feeling and sense of heft and weight are both as pleasingly tangible as you’d hope they would be. This also feeds directly into Supercross 3’s handling system too, since more so than ever before, controlling weight distribution and momentum is now more crucial than it ever has been. Additionally, the improved physics system also permits much more bombastic use of whips, scrubs and other flourishes, too.

If the physics system does have one drawback, it would be that its newly developed functional feature set does not extend to the crashes that invariably happen during every one of Supercross 3’s races. Sadly, the tumbles and crashes that you experience in Supercross 3 are oddly tame, with your rider somewhat lamely spilling off their ride like a Havoc Physics crash doll with zero physical feedback or the expected audible fanfare. A shame, then.

Ultimately though, thanks in no small part to the aforementioned tweaks to the physics system, Supercross 3’s core racing gameplay is more solid and robustly responsive than it ever has been, with each class of Supercross from 250SX to 450SX series’ displaying the expected level of taut, physical feedback and highly responsive control.

Beyond the meat and potatoes of Supercross 3’s offering, Milestone have also supplied an ample feature set too, with multiple racing events, online multiplayer, an upgraded track creator, the ability to customise a female rider, and of course, a sizable campaign mode. Sadly, when it comes to the campaign mode, what Milestone has wrought here is sadly a little less than stellar.

Something of a dull offering, the campaign mode in Supercross 3 (which takes in the official 2019 AMA Monster Energy Supercross season), unfolds across a range of different tracks and stadiums and, other than a fairly rudimentary XP driven progression system which can be used to unlock various outfits and so on, is simply just a series of linked single races with very little other connective tissue to glamorise or otherwise enhance its ho-hum presentation.

Speaking of overall presentation, Supercross 3 has seen considerable upgrades here too. Visually, the game is more polished than ever before with high texture detail, improved track deformation and a resolutely stable frame rate throughout – something of a mean feat considering the sheer number of riders that can flood the screen at any single time. Furthermore, a lot of work has seemingly gone into the tightening up the riding animations over last year’s game too, with every little movement being deftly captured in a way that seems both natural and realistic.

Elsewhere, the effects work in Supercross 3 is also leagues better than its predecessor, and indeed, such improvements are perhaps glimpsed in no better place than in the much more advanced particle and lighting effects strewn throughout the game. From the awesome spectacle of colored pyro alighting the track around it, to the manner in which the shadows cast by such an event, Supercross 3 is certainly much easier on the eyes than any of its predecessors.

In the end then, Milestone’s latest Supercross powered endeavor is an ultimately successful one. Though the strangely limp crashes and distinctly by the numbers campaign do little to inspire, the core experience feels so greatly improved by the new physics and handling system that it makes the franchise worthy of fresh consideration by both racing afficinados and genre newcomers alike.

Though overly tame crashes and a no-frills campaign rankle, a superb handling model and improved feature set both ensure that Monster Energy Supercross – The Official Videogame 3 is the best the series has ever been and clearly showcases Milestone's Supercross franchise on an upward trajectory.