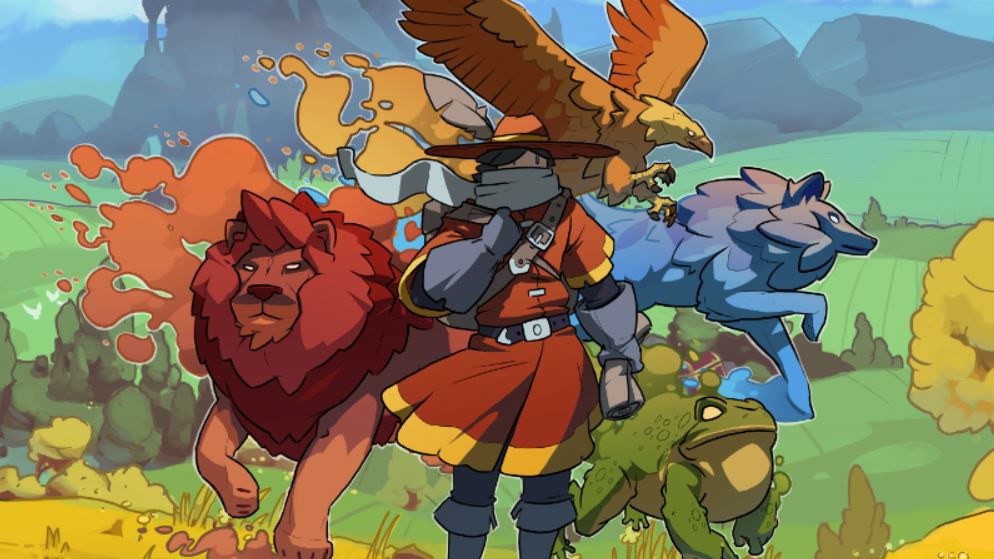 Monster Sanctuary PS4 Review – Monster Sanctuary from Moi Rai Games and Team17 is about monsters. The clue is in the title I suppose. Monster collecting, monster growing, monster fighting and monster befriending. There’s a lot of monster-related gubbins in this game but aside from that, there were a few other interesting things that kept me playing for a lot longer than I thought I initially would.

In Monster Sanctuary you are the next in a line of budding monster keepers and you must save the titular monster sanctuary. I wonder how many times I will use the word monster in this review? Spoilers, it’s quite a lot. There is not a great deal of story work in Monster Sanctuary, well, not a lot of non-cliche story work anyway. It’s all fantasy ground that is well-trodden and has been told hundreds of times before; it is, however, the gameplay of Monster Sanctuary that gives this title some flavour. Watch out people, Terraria and Pokemon had a baby and it’s surprisingly enjoyable!

Monster Sanctuary is a classic-looking, 2D pixel-art, turn-based, monster collecting Metroidvania. Well, isn’t that a mouthful? All of these gears fit together well though to make an old-school-feeling game that looks like it was ripped from the Sega Megadrive in the ’90s. That is by no means a bad thing, I think a lot of people will take a look at the trailer for this quirky title and immediately move on. They will, however, be overlooking a warm, nostalgic, entertaining, and easy-going game.

That’s all you need sometimes don’t you think? A game you can throw on, enjoy, and not get burdened by heavy gameplay and pages and pages of objectives or collectables. Monster Sanctuary knows what it is, what it is supposed to do, and it is a fun, simple game to lose yourself in.

Taking the game at its simplest you navigate a 2D world, taking on turn-based battles and opening up more of the map by acquiring new abilities and monsters. This is where the game’s Metroidvania feel comes from, your monsters’ abilities can be used while navigating the world, whether it be breaking walls or hovering over gaps.

Your furry companions are always on hand to get you to that previously unreachable area. It’s a quirky system but it works, whenever you capture a new monster one of your first thoughts is how it could help you navigate or unlock hidden areas. It’s rewarding to catch creatures for reasons other than fighting and gives the game a fresh flavour.

The game’s battle system will be immediately familiar for anyone who has played Pokemon or any other monster battling game. Each monster has weaknesses and strengths and you pick what special ability or attack you want to execute on your turn. Where this game slightly deviates from the all so common formula though is its combo system and the way you evolve and grow your ever-widening array of creatures. Your combo builds up as you attack in succession, making choosing your order of attacks critical and ever so tactical.

You can also equip your monsters with new weapons, armour, feed them food you find. You can even upgrade their gear with resources located while out and about. Each monster has a massive skill tree with various ways of tweaking each attack, modifying their stats or granting buff inducing spells. It’s one thing to catch one of these fine creatures but bashing one into a shape you require is something else indeed. How you mould its attacks and skills is rewarding, especially when you are trying to assemble the perfect battle line-up.

In each battle, you are awarded loot depending on your performance. It’s like performance-related pay, kill quickly, efficiently, and with flair, and you will be rewarded accordingly. The better you do, the better the reward. And, if you are lucky, really, really lucky, you will end up with an egg of one of the creatures you slaughtered. Which seems weird to me, thematically, it means you killed the parents and ran off with one of their kids but what do I know, if it helps me kill more parents and get more kids to fight for me, I can live with it.

Visually, as I stated earlier, Monster Sanctuary does remind me of Terraria. It has a quaint pixel-art style to it that I personally love. Yes it is overdone these days, yes, it’s not to everyone’s taste but I really enjoy it, when it is done to a good standard anyway. It’s the same story with the music. Again, while not setting the world on fire, it fits the style of the game and the overall presentation it is going for. I enjoyed the look and feel of Monster Sanctuary. It’s simplistic, it does its job, and it reminds me of an era of video gaming I grew up with.

Monster Sanctuary performs flawlessly. It’s not visually taxing, there’s not much hectic resource-hungry action cracking off but that being said, it is nice to have zero crashes, zero bugs and for everything to just work. Which is, unfortunately, a rarity these days.

Monster Sanctuary is a breath of fresh air in today’s ever-growing swamp of massive open-world games. While it may not be deep enough for some players, I found its trimmed down game systems to the point and extremely streamlined. I always knew what to do, where I was going and was able to just sit back, chill out and enjoy the game for what it was. Graphically Monster Sanctuary may not to everyone’s taste but it reminded me of when I was a lad, rushing home to play Wonderboy on my Megadrive and I like that.

While I am not a massive fan of turn-based battle systems, there was something about Monster Sanctuary that kept me wanting to play it. It was the Metroidvania parts of the game and the upgrading and tending to your monsters that kept me interested. I have played Pokemon, which I semi-enjoyed, it seems all you needed to add to tickle my fancy was a bit of platforming and a touch of gated exploration and your all set. Monster Sanctuary is amusing, rewarding and if you like a game that looks and sounds like it’s from a bygone era of gaming, give this one a go, it’s a monster-hunting good time!

Monster Sanctuary releases for PS4 on December 8, 2020, and is playable on PS5 via backwards compatibility.

It may seem simplistic on the surface but even if you're like me, someone who has a passing interest in the genre, Monster Sanctuary does do a few things differently to most. It's a monster collecting game sprinkled with platforming, exploration and small puzzles. Monster Sanctuary was the game I needed to play right now, it's simple and very rewarding. It plays flawlessly and has a quaint presentation that harkens back to the days of old. Whether it's the Metroidvania exploration, the amount of monster skill and gear customization, or the enjoyable battle system, there is a lot to love here.