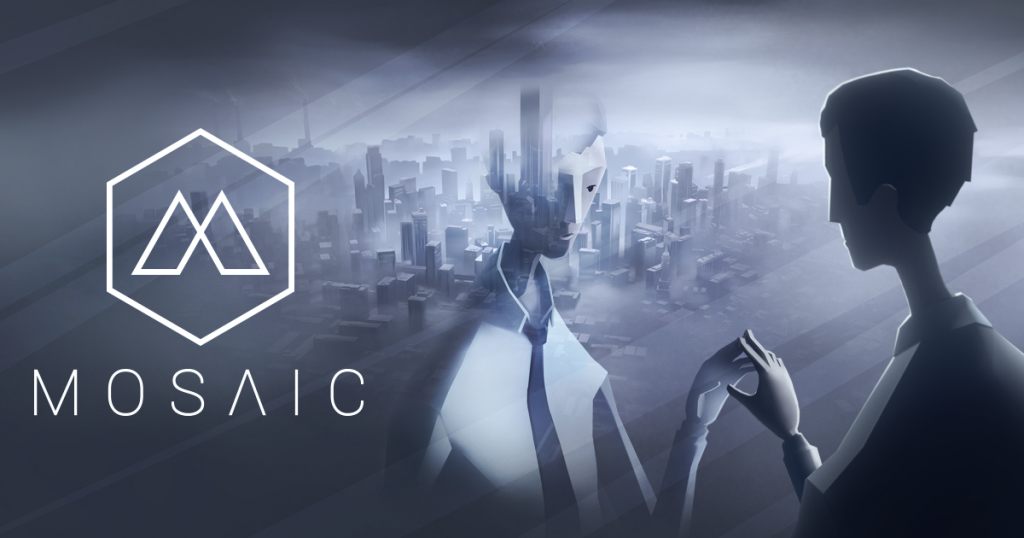 Five minutes into Mosaic I was already thinking about how much I wanted the game to stick its landing. And Krillbite does just that by crafting a satisfying and timely conclusion, warranting the journey you spend through Mosaic‘s moody metropolis and capitalist cityscapes.

In Mosaic, you do the same thing every day. You wake up in your dark and dingy apartment, head out into the cold and lifeless (yet bustling and busy) city, forcing yourself to dawdle to work in order to hit your daily milestone, earn a living and continue your miserable existence.

Along your journey each day you witness acts that showcase just how insignificant you are. People turn away from you in an elevator, beep their horns at you to hurry across the road, and push past you on an escalator.

The greyscale city Mosaic takes place in isn’t a kind one. It is a city that constantly reminds you that you are just a cog in a machine, disposable and instantly replaceable.

Every second spent playing is a reminder that capitalism brings isolation. You live in an eternally busy city, filled with more people than can fit on a pathway, but not one person cares about you or wants to become friends with you.

Each person is in the same city as you for the same reason: to work. Employed by a massive corporation, everyone hopes to climb the ladder of the corporate hierarchy, including you. You are everybody’s rival and everybody else is yours.

But, as you begin to slip up in your pursuit of that goal, you discover the people within the city. Humans and animals, living their lives and not running on the same treadmill as everyone else. A cat in a tree going about its business or a musician playing in a subway.

That is what Mosaic is about, it is a narrative-adventure about chasing the impossible and abandoning it to connect with others and regaining the humanity capitalism had sucked out of you.

The journey your unnamed protagonist (which I think is intentional) takes is about three hours and concludes with a satisfying punch and a timely message of battling against the forceful and cumbersome atmosphere of a capitalist society constantly weighing down on you. Krillbite fully commits to the themes and tone of the game and creates one of the most depressing and melancholic atmospheres I have experienced.

Everyone knows the feeling of waking up and questioning whether you want to walk to work or school today. You sit or lay there in bed and go through the journey you need to take and how long or daunting it seems.

That feeling has been translated excellently into Mosaic. After experiencing a few days of the protagonist’s miserable life, you wake up in your dark apartment and think to yourself, “Do I want to keep playing and just walk through the city for another thirty minutes?”

That is because Mosaic really isn’t a fun game to play. The majority of the experience involves you walking around the city, slowly making your way to work, waiting for traffic lights to change, or standing still whilst your train slowly arrives at its station.

Mosaic is Inside without the platforming or What Remain of Edith Finch, without the heartfelt vignettes.

But, this is just further evidence that Mosaic is one of the most committed games I have played. It doesn’t sacrifice its narrative or message for an enjoyable experience. It isn’t a bland or awful experience either to the point where you would rather gouge your eyes out than continue playing.

Once you have made the trip to work, the game does shake things up a little by having you complete a resource management mini-game in order to finish work for the day.

This mini-game has you using extractors to draw a path on a hexagonal grid to reach the goal, which is your milestone for the day. Reaching that milestone and sending enough resources up the path you have created will complete your work for the day and allow you to go home.

This mini-game does offer a breath of fresh air at the end of each trip to work and can become challenging as new mechanics are introduced, such as blobs that will gobble up your resources if the traverse over the path.

Ultimately though, much like the rest of the game, these moments aren’t particularly enjoyable or fun, but they do actively contribute to the thematic presence of the game.

BlipBlop, A Few Bugs, And Some Beautiful Shots

On top of everything Mosaic does to commit to its themes, there is a phone game within the game, called ‘BlipBlop’, that perfectly encapsulates both the mobile games industry and to some degree, the games industry as a whole. This phone game is a clicker game, you just keep pressing X as you wait for the number of blops to increase. The entire thing serves no purpose except being a timesink filled with meaningless rewards to help you blop more, accompanied by a selection of flashy effects and sounds, just to get that dopamine pumping.

BlipBlop is just another piece of the mosaic that contributes to the whole that is this game. It highlights how modern city life is so bleak that we all waste time hunting for a rush of excitement and thrill that is never going to come. Even the Platinum trophy for the game solely consists of playing BlipBlop and unlocking all the rewards, another pointless chase for satisfaction.

Mosaic isn’t flawless though. In fact, it is a little rough around the edges. The game crashed on me a few times and frame-rate drops were common during scenes with a lot of moving people. Luckily, for the type of game Mosaic is, these issues were not too problematic.

Those issues fade even more into the background when looking at some of the gorgeous cinematography Kriibite have incorporated into Mosaic. There were moments of this game where the depth being shown and the camera position that was chosen were impeccable, creating some gorgeous shots of the busy city. These shots went a long way to emphasize the bustling city atmosphere with almost no humanity left in it, whether it be rows and rows of people on an escalator or a long street filled with nothing but black cars barely moving along a motorway.

I don’t think I have ever seen a game commit to its themes and the world more than Mosaic. Krillbite has taken an idea for a game, that idea being emulating modern city life, and perfectly replicated it into a world you can experience. They have expertly translated everything that comes with living in a Metropolis. The bustling atmosphere, the punishing loneliness, the intense competition, and even the heartwarming moments of humanity sprinkled about the grey streets. It is all there and executed impressively well.

Every single aspect of this game is a part of that vision Krillbite had and whilst that creates an all-encompassing journey, it does mean that Mosaic isn’t an enjoyable game to play and at times it can be noticeably vapid of engaging moments and the crashes didn’t help. This game isn’t for everyone, but if you are in a philosophical mood and want to ponder the idea that all of us are submitting to the iron fist of capitalism then Mosaic is the perfect encapsulation of chasing your dreams and career goals and feeling absolutely worthless while you do it.

Mosaic is available now on PS4.

Krillbite should be commended for what the achieve with Mosaic, crafting an experience that wholly commits to its themes, atmosphere, and narrative. Each moving part of the game contributes to the whole journey and creates an exceptional replication of the bleak, hostile, and depressing lifestyle that is modern capitalist-fueled city-life. It isn't a particularly enjoyable game to play, but that lack of gratification is just another part of the magnificent mosaic that is, Mosaic.