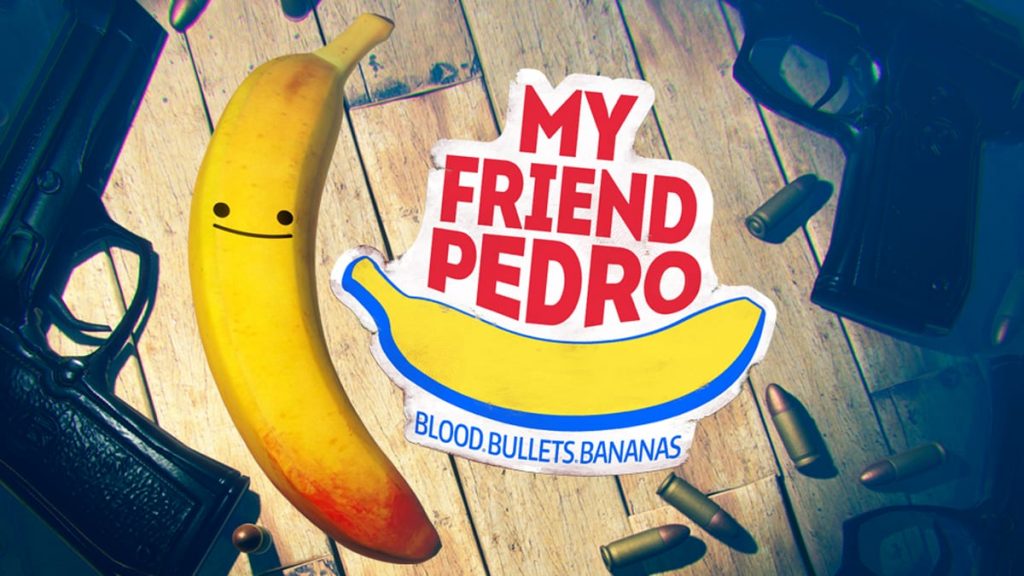 I had seen how incredibly bat-shit crazy My Friend Pedro looked before I played through it, however, I do not think my eyes, ears and fingers were ready for what has just been thrust upon them. It’s a ballet of bullets, a twisted story of revenge and once it grabs you, when you get the combat and movement systems down, it becomes an addictive flowing action masterpiece. It is truly brilliant and it is finally here on PlayStation 4.

You wake up without any memories, it’s a bit generic but you know, video games. You then embark on a mission to remember what happened to you and in the process become an Olympic acrobat mixed with Neo from the Matrix. Your only guide is a quirky banana apparition – I know, I told you it was bat-shit crazy and it only gets crazier the further you get. The story is light, funny in places and is littered with video game and pop culture references. It brings nothing new to the table really but it’s the gameplay that truly shines.

The game plays out over many small stages, the fact that the stages are small and quick is a very wise design choice too. For reasons that will become apparent. Most stages are just a case of moving from left to right, murdering anyone who moves in the most badass, backflipping way you can. Where the ‘hook’ comes from though is the combo system, the bullet-time system and the sheer magnificence when you successfully blend them together. Each level gives you a rating and to get good scores requires finesse, a bit of tactical nuance and a lot of flair.

The best way to describe it is to look at each combat encounter as a small puzzle. How can I get the most points from these goons? How do I do it as fast as possible and make it look really jazzy? Each time you get hit your combo timer gets reduced so dodging bullets is another key factor to take into account. Luckily you can press L1 to spin and avoid bullets. This again, adds a whole other dimension to your artistic killing. You really can unleash your inner John Wick, or your inner Baba Yaga if you prefer.

My early tactic was usually activate bullet-time, flip into the air and then just wing it! Just as you start to get to grips with all of the above, the environment starts to come into play too. Explosives, frying pans, basketballs, gas tanks and even enemy body parts can be kicked at enemies, shot or even used to reflect bullets. Nothing pleased me more than kicking a frying pan up an elevator shaft and ricocheting bullets of it in all directions as it spins killing everything in your path. It just all feels so good.

You get the feeling of being a complete badass, when you get through an encounter completely unhurt, while dual-wielding uzi’s, backflipping off a skateboard and it never got old during my five hour playthrough. Yes, the game is short but I enjoyed going back to levels to try and get those elusive ‘S’ ranks. When you start to do this you realise how well the game is designed, how each level plays out as a death puzzle and how all the games systems work together to enable you to really express yourself and solve this puzzle laid in front of you.

This is why I think the levels are short, It was never annoying to get halfway through a stage, break your combo and shoot yourself in the metaphorical foot. The stages are that quick that it does not matter in the slightest. It is fun flying through them again and trying out new tactics and finding even more devious ways to kill your enemies. Most stages only take a few minutes and they heavily encourage trial and error with their short runtime.

There are different weapons, unlockable hidden modifiers and other things to keep you entertained, so do not let the short run time worry you at all. If you want to master this game then you will play it for more than the five hours it takes to complete the game on its default difficulty. Believe me, when you get to grips with My Friend Pedro you will want to replay its levels and improve your scores. It’s very rewarding and quite addictive.

My Friend Pedro reminds me a lot of Hotline Miami and yet it feels so different in many ways. One way it really is similar is its stellar soundtrack. It’s crunchy, it’s punchy and the bass ripples through every stage. When you’re on a long combo and in the groove and everything is going your way, you can do nothing but bob along to this fantastic set of tracks that accompany this game. They really do suit the game’s quick and agile style perfectly.

The art style is similarly apt. Even though your character does look a bit peculiar sometimes due to the acrobatic nature of the movement system, the graphical style on display here fits the game to a tee. It’s gory, it’s gritty and it fits the bill perfectly. Don’t get me wrong, the graphics are not the best I have ever seen but they fit this style of game flawlessly. The art style and sound design go hand in hand in hand to make your murdering exploits as enjoyable as possible.

Performance-wise, I only really had one issue. I got stuck on a lift once and had to restart the level. Apart from that everything ran perfectly. No crashes, no hiccups, no graphical anomalies or framerate issues to report whatsoever. This means I was left to carry out my murderous tendencies unabated and I never worried that the game was going to get in my way. It’s nice and refreshing to see in an era of rushed out, broken games.

An All Action, Flowing Masterpiece

I went into this review with high expectations and My Friend Pedro put a cap in my expectation’s ass and blew me away. I was not expecting the amount of puzzle work and platforming that peppered the game’s campaign but it all fits really precisely together and feels amazing to play. You are rewarded for finesse and skill, which I love in games and you are encouraged to kill how you want to. Sometimes I did amazing things without even thinking about it and if felt awesome.

I am not done with My Friend Pedro and will try and mop up the ‘S’ ranks on the levels that I am missing. I am still really into the way the movement system, combat system and bullet-time system work together and give you the tools to express yourself. It is like nothing else I have played before and if you’re on the fence about it, try it, I think most people will fall in love with it. I did.

My Friend Pedro is out now on PS4.

I loved the freedom My Friend Pedro gave me. It gives you the tools to succeed but how you use them is up to you. Once you get to grips with its various gameplay systems you are free to create artistic murder. When My Friend Pedro is in full flow, it's like watching a ballet, the game rewards skill and finesse and it is truly beautiful to see. Just go and play it. You will not regret it.