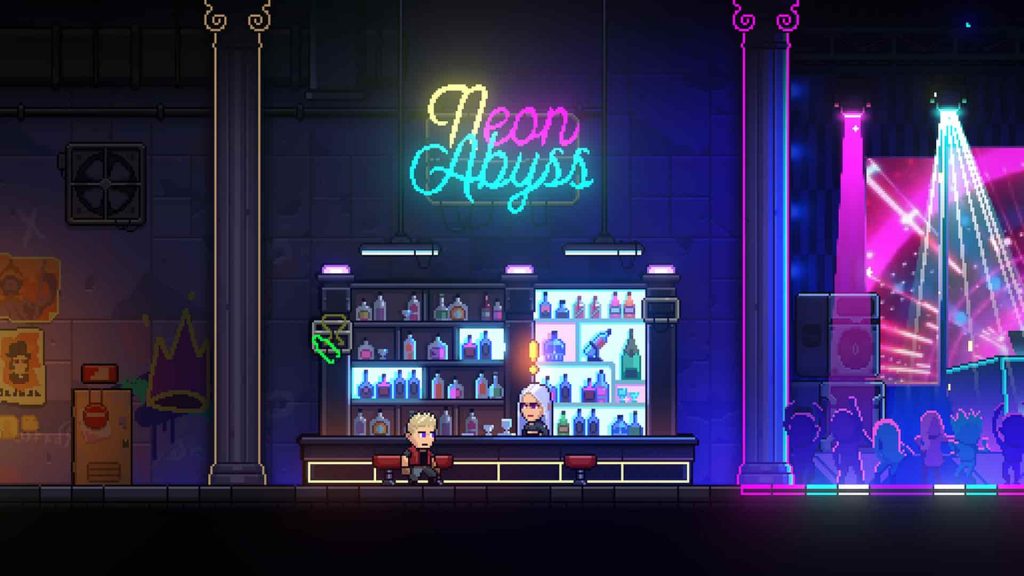 Neon Abyss PS4 review – By this point, in the year of our PlayStation Lord 2020, there doesn’t seem to be a whole lot of innovation kicking around the roguelike shooter genre. Enter then Neon Abyss from Veewo Games – a distinctly fresh-faced effort that not only combines the likes of Enter the Gungeon and Pokemon(!) to great effect, but which also goes full throttle on its roguelike design DNA.

A Surprisingly Innovative, Visually Stylish Roguelike Shooter That Stands Shoulder To Shoulder With The Best

As the member of ‘Grim Squad’, a hodgepodge collective of warriors dispatched by Hades (yep, that dude) to plunge into the titular Neon Abyss and deal with an uprising from the highly upset New Gods, a pantheon of super entitled contemporary deities that embody everything from social media to online gaming. In practice, this means that you’ll be running, gunning and looting your way through a swathe of randomly generated levels before facing off with the big bad at the end of that area.

So far so roguelike then, but Neon Abyss has more than a few tricks up its psychedelic, neon-hued sleeves to distance itself from the genre status quo. A side-scrolling 2D shooter, the first and most immediately noticeable of these is how Neon Abyss allows you to choose from a selection of very different protagonists that each have their own abilities, strengths and weaknesses.

While the addition of different player characters might not seem like a groundbreaking aspect in and of itself, it serves a grander ambition to make every playthrough both feel and play differently for each player that picks up the controller. Further serving that ambition of a fresh and unique playthrough is the manner in which the player accrues new weapons and upgrades in Neon Abyss.

Sure enough, while Neon Abyss does adhere closely to the basic tenets of the roguelike sub-genre where after each death you can purchase upgrades and buffs that make future playthroughs a little easier, there is a veritable smorgasbord of new weapons and gear which can be obtained during each playthrough as well. From basic pop guns to massive, hulking great cannons that fire what look like homing shark rockets at folk, the width and breadth of the destructive offering that Neon Abyss has is quite substantial indeed, and all the weapons feel great to use.

Beyond just obtaining new firearms, Neon Abyss allows you to effectively stack gear (and subsequently their effects) onto a single character too, permitting players to create some hyper-destructive character builds in relatively easy fashion with everything from saucepans that have a chance to reflect incoming bullets, and various foodstuffs that extend your maximum health, to name just two.

Where Neon Abyss really stakes a difference between its genre stablemates however, is in the Pokemon style pet system that it embraces. Here, players can loot eggs from chests and from certain defeated enemies which then follow them around for as long as they live. As time goes on and assuming you’re lucky enough, these eggs will hatch and produce a random pet with a unique set of characteristics. For example, one pet might be a helpful little lad that hops around the screen, collecting coins so you don’t have to, while another might be a mystical 8-ball that attempts to soak up enemy bullets in your stead.

That’s not even the end either. In further doubling down on its Pokemon influences, not only can you have as many of the pets stacking on top of each other as you like, but they can also evolve over time too – intensifying the strengths of their abilities in the process. Simply put, when all the unique characters are taken together along with all the different gear you can collect, pets that you can use and guns that you can collect, it soon becomes clear that the scope for unique play combinations in Neon Abyss is both pleasingly and stunningly vast.

If Veewo Games understanding of what makes progression so satisfying is assured, then so too is the studio’s seemingly practiced hand at giving the player more to think about than just shooting things in the face and picking up whatever falls behind them. You see in Neon Abyss, beyond the shining currency which can be used to purchase new gear, our plucky hero can also collect keys and crystals as well which can affect how deeply the player can explore a given level.

Keys sort of speak for themselves in so far as they allow you to unlock special chests and certain doors, but are obviously a desperately finite resource (unless you have a gun that shoots keys – no, I’m not kidding), while crystals can also be used to access chests, doors and other special vendors, but also tend to be much more common in the game world. The difference between the two though, is that many of the special abilities that are bestowed onto our hero by the gear that they collect, is affected by the number of crystals that you have. Some trinkets let you do more damage the fewer crystals you have, while others let you fire faster when the opposite is true.

Then there’s the way that you can even affect the ways that the levels are created too. And once more, the freedom to affect your playthrough proves to be one of Neon Abyss’s most strongly compelling facets, as the player can invest hard won points (earned from defeating bosses) after each playthrough into unlocking new rooms and chambers that further diversify Neon Abyss’s already varied levels.

When you’re not blasting enemies into meaty chunks and scooping up precious loot in the gory aftermath, Neon Abyss caters for folk during the quieter moments with a series of esoteric mini-games that provide a grand distraction from Neon Abyss’s main tenet. From piano performances, fishing and fight clubs, to dance competitions and meditation challenges, Neon Abyss has no shortage of surprising and compelling activities to keep your interest running high.

Audiovisually, Neon Abyss strikes quite the form too, with the energetic thrum of its techno and rave soundtrack matching up duly well with its neon-tinged environments and vibrantly colorful character models. If there is one area where Neon Abyss stumbles, though perhaps through no fault of its own on account of its deliberate design, it would be in the fact that your options for traversal seem conservative and limited. There’s no dash, bullet evading dodge roll or anything of that kind, which seems a shame, but overall it’s not enough to seriously wound the stellar offering that Veewo Games have fashioned here.

And this is the thing – Neon Abyss is a stellar offering and more than that, it pushes forward the whole roguelike genre in new, interesting and unexpected ways. Happy days indeed.

A deliriously entertaining mish-mash of roguelike platform shooter, mini-games and Pokemon style mechanics, if Neon Abyss feels like Roguelike Shooter 2.0 - that's because it is.