It doesn’t take long before you realise that Neon Chrome is a supremely easy affair to sink hours upon hours into. A top-down, twin-stick shooter with roguelike elements, Neon Chrome might not be the most original genre effort out there, but Finnish developer 10tons has arguably fashioned a well-crafted shooter that feels wonderfully at home on PS4.

Do Electric Sheep Dream of Bullets? Set in a far-flung cyberpunk future where having any sort of flesh kinda puts you in the minority of things, Neon Chrome tasks the player with taking down the nefarious Overseer; a frankly horrendous villain who wants to build a society of technologically advanced beings to toil under his yoke, remaking the world however he sees fit.

As with any villain worth their salt, this Overseer has a bit of a thing for self-preservation and so has decided to stuff himself into the top floor of a Dredd-esque, Megacity One-style tower complex. As you might well guess, you have to battle your way through some thirty-odd floors to get to the guy and put him out of your misery. However, before you can even get a sniff of the Overseer’s corrupt hide, you have to spend a good chunk of time shooting up all of his henchmen and sub-bosses, unlocking new and more powerful upgrades as you go in order to prepare you for the final encounter.

Playable in single-player or local couch co-op (the omission of online co-op feels like an egregious oversight to say the least), Neon Chrome keeps each of those thirty floors feeling fresh by relying on that most trustworthy pillar of roguelike design; procedural level generation. This means that each new attempt at taking down the Overseer is done so against level layouts that you likely wouldn’t have encountered before.

Beyond just providing randomly generated levels for you to blast about in, Neon Chrome also does that wonderful thing that all games with roguelike elements should do by making you feel a little bit more powerful and capable with every death. Here the manifestation of that is in terms of stat upgrades such as health, damage, luck and so forth that can be paid for with money looted from crates and fallen enemies, while a gradually wider selection of new starting firearms can be bought the higher up in the tower each attempt takes you.

In addition to such upgrades a number of cybernetic enhancements are also available. In each case, these upgrades can provide boosts to anything from melee strength to more esoteric improvements such as granting bonus damage when your health drops beneath a certain threshold. In short then, the scope of customisation and tweaking the performance of your character is pleasingly substantial to say the least.

In fact, the inclusion of these roguelike elements is so well handled that the game never really feels like a chore even when you embrace the grind. No doubt the perpetually fresh level design that accompanies each playthrough goes a long way to eradicating the malaise and creeping boredom that other, more seemingly similar fare might otherwise embrace.

Neon Chrome then feels a little like a top-down shooter take on Rogue Legacy and while the caliber of the title isn’t quite such that it could easily survive such lofty comparisons, the accomplished intertwining of roguelike elements with traditional genre fare certainly shows that developer 10tons possesses a formidable grasp on the marriage of those two schools of design. 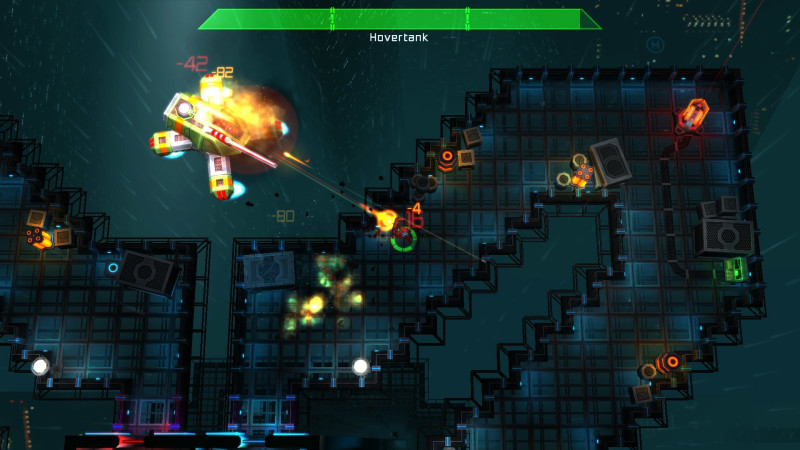 Regardless of how decently the Finnish developer managed to pull off the roguelike side of the equation, the bread and butter of a game like Neon Chrome was always going to be the traditional twin-stick shooting that exists at its core and thankfully, 10tons have come through here in pretty grand shape too.

With its highly responsive movement and precise aiming mechanics supporting a broader structure of twin-stick shooter play, it’s obvious to anybody with a pair of eyes and hands that 10tons have at the very least, fashioned a robust little shooter. In addition to nailing such base mechanics with aplomb, Neon Chrome permits players to choose from one of three random class types that each come with their own strengths, weaknesses and different sets of abilities.

Hackers, for example, are able to use their considerable nerd skills to crack safes and doors for extra loot, though on the other hand they might be lacking in health and additional slots for combat boosting augmentations. Conversely, players might just want to pick a more all-rounder type character that balances stats and offensive output; either way the choice is yours, and it’s illustrative of just one more extra bit of freedom that Neon Chrome provides the player when it comes to customisation of play.

As far as the actual act of killing stuff goes, Neon Chrome does a fine job of keeping players on their toes with a veritable menagerie of different foes to lay waste to. From fixed position turrets that spray the area with fire to creeping spider droids, roaming security guards and homing drones that explode on impact, there is more than enough variety of foes to tax your skills and keep you satisfyingly challenged from start to finish.

Irregardless of the type of enemy that you find yourself up against though, paramount to survival in Neon Chrome is a deep understanding of how to use space. In particular, mastering the art of strafing around your opponent, picking your shots and ensuring you don’t get yourself cornered are all tenets of an overall conscious strategy of movement that the game impresses upon the player as being key to survival. While the majority of gunplay in Neon Chrome is contested in a very much balls-to-the-wall style scenario, interestingly there’s actually an incentive to attack from stealth too; with additional damage bonuses being granted to the player for every successful sneak attack on an enemy’s rear flank.

Elsewhere, destructible walls allow you to bust through certain areas for a tactical advantage while collectible colour-coded keys permit access to corresponding locations in a fashion not unlike that of id software’s seminal first-person shooter classic DOOM. If there is one downside to the shooty shenanigans of Neon Chrome, it’s that the boss fights are simply skewed way too difficult in the early going. Certainly, while your first encounter with Neon Chrome’s first boss (there is one of these bad boys every five floors), will result in you being ruined pretty quickly, it doesn’t get much easier even with repeated grinding so be be prepared to put a fair few hours in before you can topple him/it/whatever.

You Will Ride Eternal, Shiny and Chrome 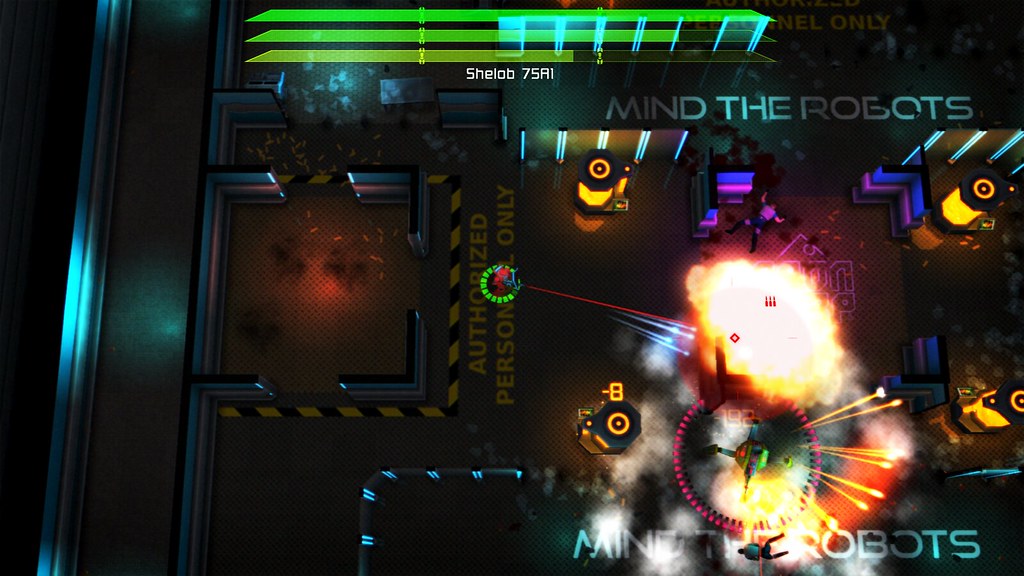 As much as developer 10tons is clearly a devout follower twin-stick shooters and roguelike mechanics, the mostly assured audiovisual presentation of Neon Chrome also points to a developer mildly obsessed with cyberpunk noir, too. Liberally doused in neon hues, flashing lights, computerised billboards and blazing fire, Neon Chrome not only looks the part, it sounds it too as a fierce barrage of synth tunes frequently assault the earholes in a bold effort to convince your brain that you’ve somehow tumbled into a dimensional portal and emerged in some sort of retro-futuristic 80’s cyberpunk hellhole.

As modestly impressive as the visual and audio are, a frame rate that goes no higher than thirty frames and sometimes dip beneath that during busy scenes proves to be a little disappointing; the imperative of sixty frames per second a clear and obvious one for any sort of twin-stick shooter hoping to ply its trade in 2016 on PS4. Here’s hoping that a future patch can address this. Neon Chrome is the absolute sum of its parts and in the absence of true surprise or innovation it nonetheless brings reassuring competency to a hybrid genre that many have previously failed to achieve. Easy to get into and bursting with longevity, Neon Chrome is a blast when either played alone or with friends; it’s just a pity that the domain of the latter extends no farther than your living room couch.

There isn’t exactly a shortage of twin-stick shooters on the market that much is for sure. Neon Chrome however, while not doing anything especially innovative, nonetheless does a great job of pulling together roguelike elements, deep progression systems and satisfying twin-stick shooter beats into a single, compelling whole.