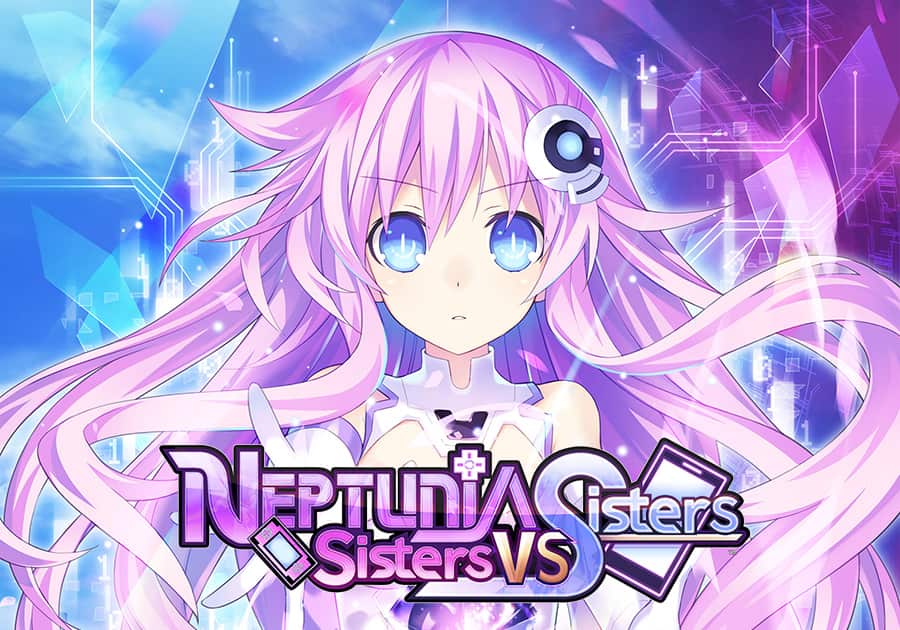 Neptunia Sisters vs. Sisters Review (PS5) – The Neptunia games have been released for years now, each one with its own tongue-in-cheek humor and simplistic style.

While they stay true to themselves, each game feels just a couple decisions away from a better experience. Neptunia: Sisters vs. Sisters is no different. 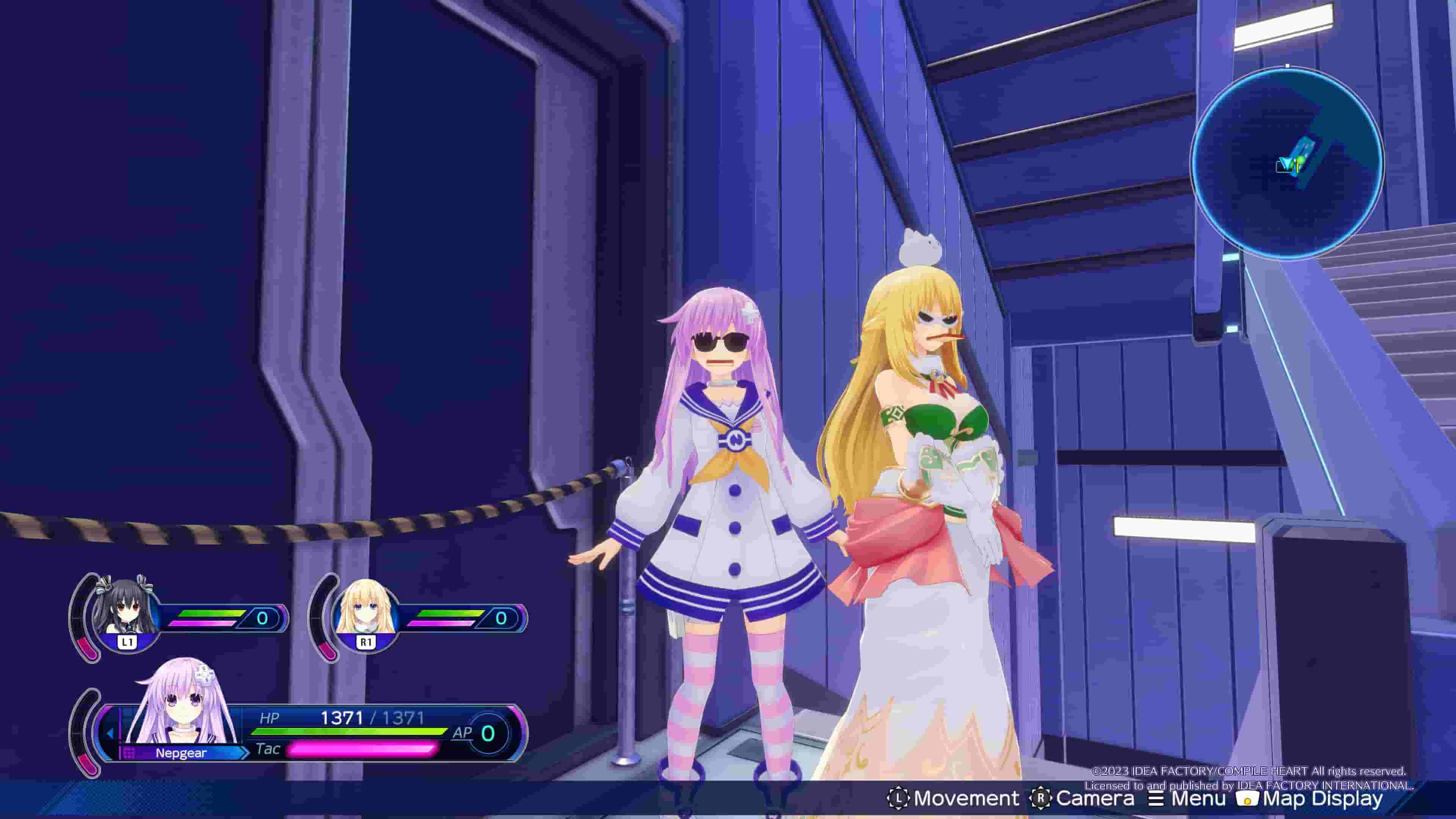 The four cities of Gameindustri-Lowee, Lastation, Leanbox, and Planeptune-are in danger of the most recent threat: Trendfluence and Vtubers. These Vtubers spread their influence all over the Internet, coaxing people to follow their lead.

The recent surge of monsters has everyone staying indoors, and the release of the rPhone and its mobile games has turned the population into drones. For those not familiar with the Neptunia franchise, these heavy-handed jabs and references are par for the course with these games.

The game even mentions supply chain issues and that Lastation works hard to distribute as many units of its new console as possible. 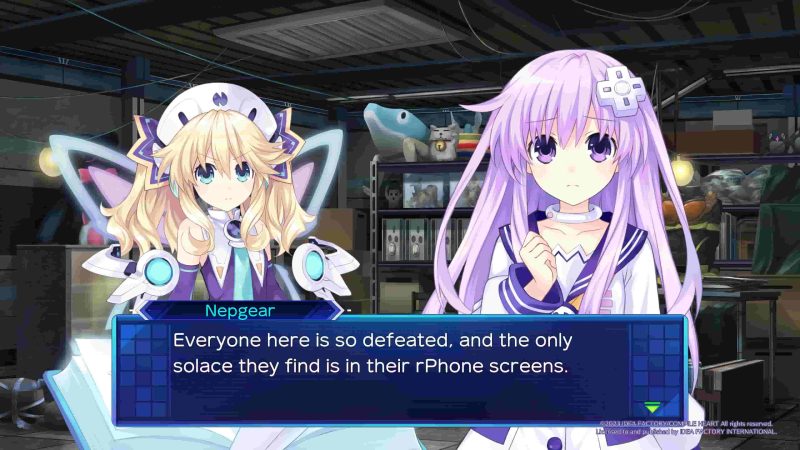 Apart from that, the cast of characters here comes across exactly how they do in other games: goofy, intentionally one-dimensional, and bubbly. Now, however, there are even more characters to consider.

The Goddesses of Gameindustri are joined by their Goddess Candidates, who basically share similar looks and personalities to their celestial counterparts. The only exception is the correct main character, Nepgear, who delivers herself more selfless and endearing than her forth wall breaking counterpart, protagonist Neptune.

The ever-growing cast makes for a hefty distraction from how advertently simplistic the characters are delivered. Don’t get me wrong: They still deliver the kind of goof and satire that garners a good chuckle along the way. However, the script still fills itself with the standard repetition and mindless banter that comes with these games.

Aesthetically, the game world is simple. Apart from the cities themselves, most zones feel samey. Each area is large and consists of several areas to explore. However, from beginning to end, these areas present themselves so simplistically that you spend more time looking at the map than you do exploring it. 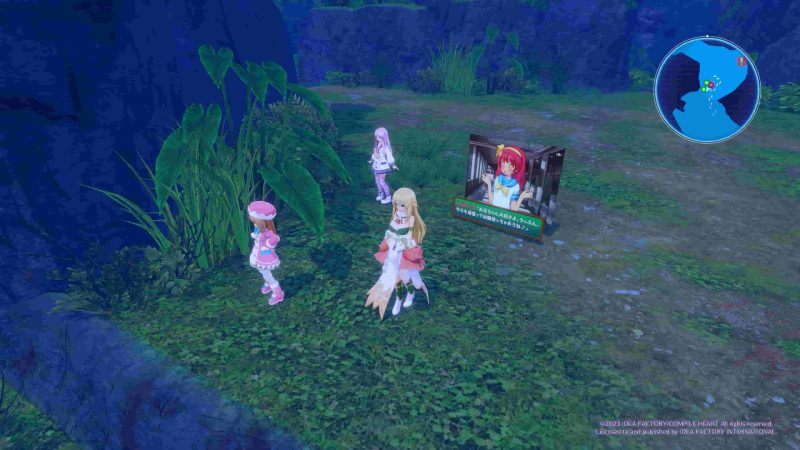 This franchise makes its living on a limited budget, so reusing assets is inevitable. Still, with how often you return to each zone, seeing the same thing over and over grows dull quickly. Inversely, this does make it that much easier later on to run through zones to complete side quests.

Whether that’s a glass-half-full perspective is up to you.

In outside zones, the game stutters in the weirdest way. The game itself runs at 60 fps as it should, but the foliage around you refreshes at a lower framerate. This juxtaposed visual oddity makes navigating the outdoor areas trippy, almost like the base game includes a strobe effect behind it.

Load times lack the kind of refinement we have come to expect from PS5. When on a map, only a second or two passes between leaving one zone and entering another. However, when moving to or from the main hub, loading times take about 15 seconds or so. While far from egregious, this game just doesn’t seem like it demands that much from the PS5 hardware. 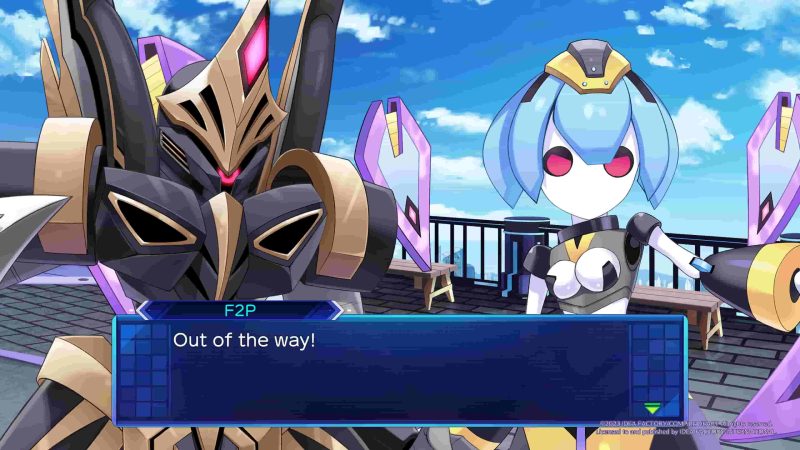 Combat effects get the job done, giving each attack or spell just a little bit more emphasis than a standard flick or slash. The game benefits from this because as you progress through the game, your attacks increase in scope and speed.

The reigned-in effects allow you to see everything on the field instead of burying all your actions behind flashes and explosions.

Generally, running through one character’s ability points gives the others enough time to refresh. So, you never sit any length of time with no way to attack.

However, the game doesn’t give you the means to truly maximize the amount of ability points you hold with the three characters. When you activate a skill, you must keep that character your controlled character. If you switch characters mid-skill, the skill cancels. This means that at least one character is sitting with a full cache of ability points that go unused. 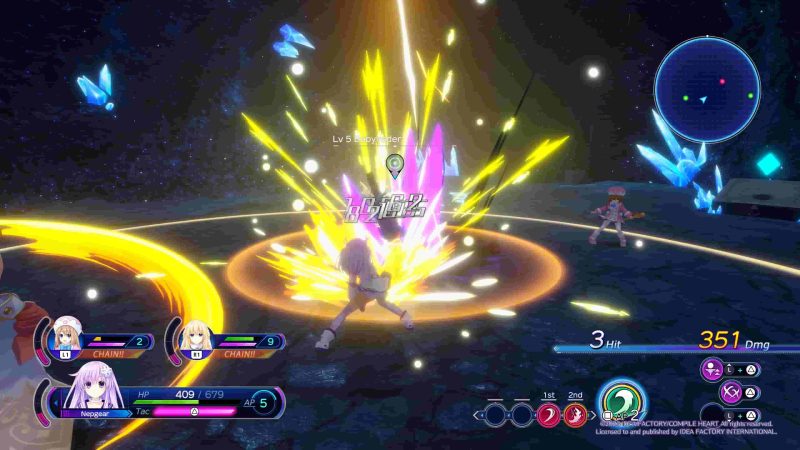 The AI doesn’t have the capacity to chain those abilities together on their own, opting to keep them available for you to use. I like the idea of giving the player complete control, but diminishing potential by gating skills in this manner keeps the formula from hitting another level.

Inversely, this allows the game to remain more casual, but the low difficulty of the game caters to that casual nature already.

There’s an opportunity for something good here. Despite the limitations, chaining combos between your party members feels fun most of the time, especially in boss fights. You can keep the chain going for hundreds of combo points! Combat definitely stands out as the strongest aspect of the game.

Unfortunately, the attempts to mesh complex combat with accessibility don’t meet anywhere near the middle to make the formula truly feel great. 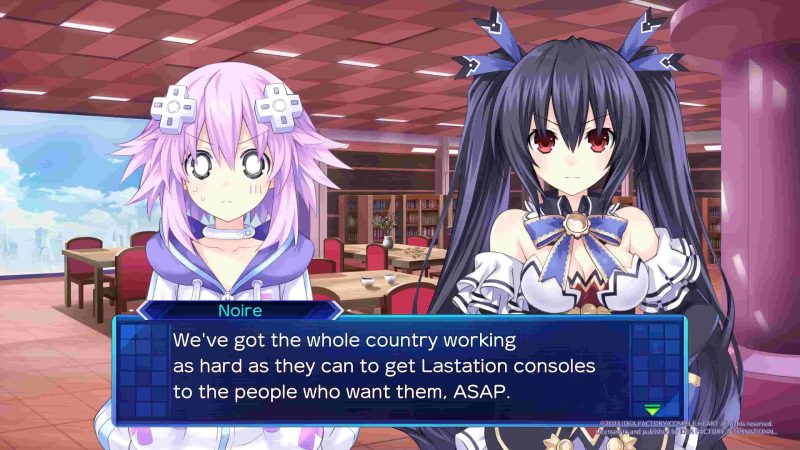 Managing character stats comes down to the bare necessities of RPGs with one addition: weapons, accessories, and discs. Weapons and accessories come from vendors or random side quests, as is the standard affair. Apart from a handful, discs come from you mixing items you collect along the way and creating the discs.

I can’t say for sure how the formulas behind disc creation work, but I get a distinct impression that it’s far from completely random. Random results still appear, but the potential results come from specific combinations.

For instance, you combine genres in the first two slots, such as “Action” and “Adventure,” and then inject an item that fits the same combination, something like the 10-Ton Hammer. In theory, combining these slots with related items gives you a better chance for a AAA-quality disc. 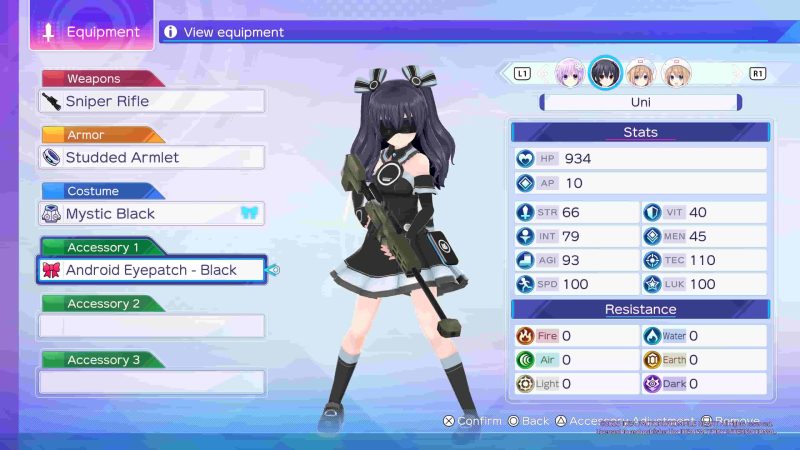 Rather than improving stats, discs provide additional perks for your characters, like canceling a combo with a block, increased experience and money gains, and attack speed. These give more control over combat than you had before, which could have brought a nice additional touch to gameplay.

Unfortunately, since you can’t maximize your damage output or combo chains by default, adding in these additional benefits further expounds on the lost potential. Granted, it helps to keep combat fun as you progress, but the overt simplicity of the base formula keeps the added bonuses from discs from truly benefitting gameplay the way it could. 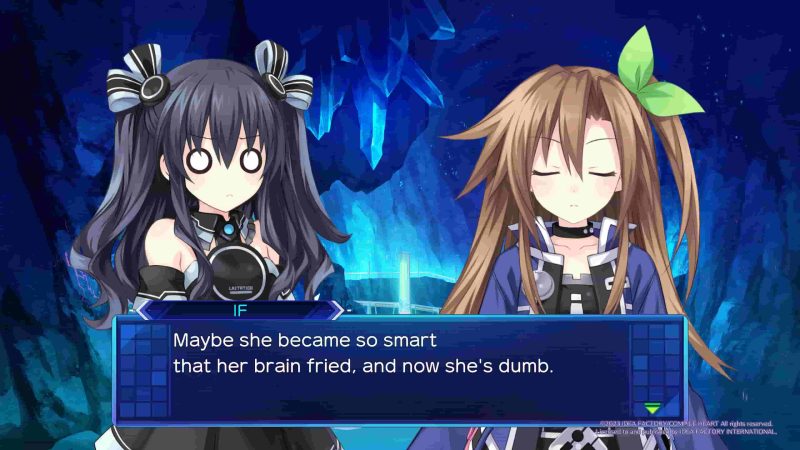 Neptunia: Sisters vs. Sisters brings some things to the table that, in theory, could work well together and push this game above the rest of the franchise. In fact, the potential is so strong that it could be enough to bring in an even more general player base into the fold.

Many of the creative decisions along the way cater to the player base that sticks with this franchise instead of opening up to new fans. In an industry that constantly generalizes, Neptunia stands its ground and keeps to its guns. However, in doing so, it misses out on adding some compelling depth to combat.

Without a doubt, the normal audience will grab this game. Still, there’s something here that could be compelling if you want a simple RPG palette cleanser that doesn’t demand much effort.

Neptunia Sisters vs. Sisters channels the same cheeky humor and simplistic gameplay that fans have grown to expect. At the same time, some of the creative choices implemented here don't mesh well enough to make a complete concept. It all works and has its own kind of fun, but the game misses out on a more cohesive product that a more broad RPG fan base might have wanted to try.