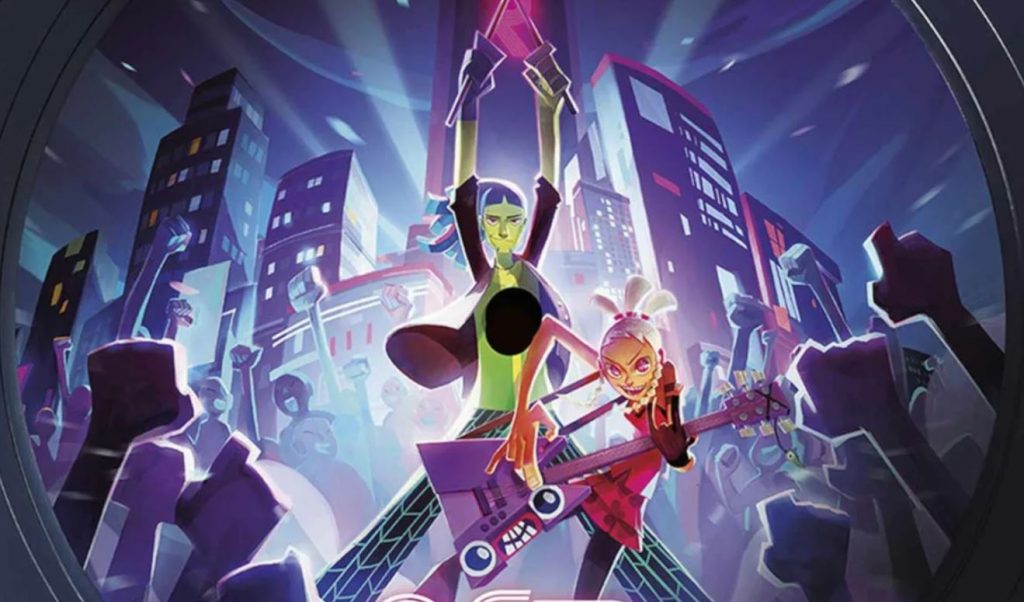 No Straight Roads PS4 Review – No Straight Roads is a game I feel incredibly conflicted about. The game shines when it leans into its rock and EDM-fuelled world and immerses you in a soundscape where everything moves to the beat of the music. But, the actual game here starts off strong, slowly growing more repetitive and less interesting the further get, which makes the last half of the game far less enjoyable than the first. Let’s dive into more detail about Metronomik‘s No Straight Roads.

A Band On A Mission

In No Straight Roads you play as Bunkbed Junction, a two-person band made up of the guitarist Mayday and Drummer Zuke. After auditioning for the No Straight Roads (NSR) empire, you are demeaned and thrown aside as the judges declare rock as outlawed in Vinyl City, with EDM now ruling the streets, bars, and clubs. In order to bring rock back to the city, you set out together to bring down the NSR empire and defeat the judges that threw you out onto the street.

As a set-up for the action ahead, the narrative of No Straight Roads gets off to a good start and the heavy guitar and bassy drums pump you up and send you to the game’s first boss fight feeling like you are ready to take on the world.

But as the game progresses onwards, the boss-rush formula of moving from EDM artist to EDM artist grows stale and the initial thrust of the story gets lost in family dynamics that connect Mayday and Zuke to the people in and around Vinyl City in a forced and not at all interesting way. Combine that with a third act that feels bland narratively and an uninspired plot twist that had me rolling me eyes, you are left with a story that loses all its charm the more you experience it and the initial wonder of Vinyl City and this music-filled world is deafened.

Despite the unfortunate narrative points, No Straight Roads shines in its characters and world-building. Vinyl City is absolutely gorgeous and the lore built into the dialogue of every character makes you feel like you have been dropped into a living world which has existed before you and will continue to do so afterwards. Each main character is voiced excellently and Mayday and Zuke’s chemistry is wonderful from voice actors Su Ling Chan and Steven Bones. This really is the brightest spot of the game and Mayday and Zuke’s friendship was what kept me pushing through the duller moments of the story.

A Gameplay Experience That Feels Disjointed And Jumbled

When it comes to the gameplay of No Straight Roads the core of the experience is that Metronomik has created a boss rush game. Being able to switch between Mayday and Zuke, you traverse districts of the city (which are non-combat zones) before moving onto the gauntlet and boss fight at the end of the area. These gauntlets and boss fights have you hijacking the disco party and taking on around ten different rooms of enemies, before fighting the boss at the end.

Combat in No Straight Roads can be played with a friend or on your own. Mayday is a stronger hitter and her guitar can reach further, but Zuke builds up attacks by comboing hits together and pulling off finishers at the end of said combos. He has less range and deals less damage, but is more about up-close damage and taking hits, compared to Mayday’s strength of jumping in and out of combat. Enemies all move to the beat of the EDM track in the world, meaning that the game plays like a mix of a traditional action game and a platformer.

Both Zuke and Mayday can be customised with longer range weapons to shoot aerial targets and extra abilities that can deal powerful damage or support skills which heal you at low health (which will be needed a lot). These abilities can then be adjusted more with stickers you can put on your instruments (Zuke’s drumsticks and Mayday’s Guitar). These offer limited use bonuses such as a small bit of extra health or the ability to transform items in the environment to help you faster than you usually would be able to.

When not in a dungeon you can explore the district of the city and talk to characters as well as find energy cells to powerup parts of the city and buildup Bunkbed Junction’s fanbase. Unfortunately, these sections aren’t that interesting as the majority of the characters have nothing useful to do except offer up a few lines of dialogue after every boss is defeated. Collecting energy cells is a fun task and a nice distraction, but it is so radically different from the core combat of No Straight Roads that it feels out of place.

And this is where No Straight Roads falls apart. It tries to do too many things and swaps gameplay styles so much that nothing is does gameplay-wise stands out or is particularly special. One moment the game is a combat game, the next it is a rhythm game, the next it is a runner with you having to dodge obstacles on a course whilst the object representing both Mayday and Zuke runs automatically. And, then 40% of the game is running around a vacant city collecting cells to collect more fans and be able to afford more upgrades.

No Straight Roads’ quality just doesn’t hold up to the number of gameplay changes and design tweaks it wants to throw at you. It feels like the game should have stuck to being a boss rush experience, with around ten or more bosses and dungeons than there are in the game, which is around half a dozen. Instead, those combat moments that are the best parts of the gameplay are thrown aside for forgettable collecting and minigames that feel out of place.

No Straight Roads is meant to be a game that you play over and over. You try a dungeon and boss on a higher difficulty after you get more powerful. The game even offers alternate music tracks to play whilst you complete those dungeons and boss fights. But that replayability isn’t worth the noticeable but not drastic technical issues that the launch package has.

Aside from an obscene amount of pop-in on close-range objects, I experienced frame rate drops during some intense boss battle cutscenes and even experienced a bug in the final act where dialogue from both Mayday and Zuke and the boss I was fighting was playing over one another, which meant I couldn’t understand anything that was said during these scenes and once the dialogue played faster than it was supposed to I was stuck watching a scene with no audio, waiting for it to playout in the timeframe it should have.

The game just feels rough all-around, whether it be the fact that loading screens take far longer than they should or the fact that the PS4’s home menu will freeze and lag if you back out to it whilst playing the game (which is something I have never experienced in the almost seven years of owning the console). These issues will likely get solved in a patch but right now they don’t help No Straight Roads’ case.

An Enjoyable But Unrefined Tune

No Straight Roads is in no way a bad game and I actually enjoyed playing through the first half of the story and experiencing the world and characters, which are excellently written, voice-acted and realised. But, whilst the gameplay is good, the game tries to do too much and fails to impress with any of the ingredients it offers up on the gameplay front. Technical issues make these gameplay faults less bearable and the game feels like it could have done with a few more months of mixing to get the sound, shape, and experience just right.

Whilst, it might have stellar music, the problems here can’t be simply forgotten and you might want to wait a while before picking No Straight Roads up, especially if you own a base PS4.

No Straight Roads is available now on PS4.

No Straight Roads is an overambitious game that tries to do many things and fails to impress with any of them. Despite fantastic world-building, loveable characters, and great voice acting the game fumbles in the narrative department and suffers from noticeable and frequent technical issues. Lacking gameplay polish also makes No Straight Roads more of a flop than a surefire hit.