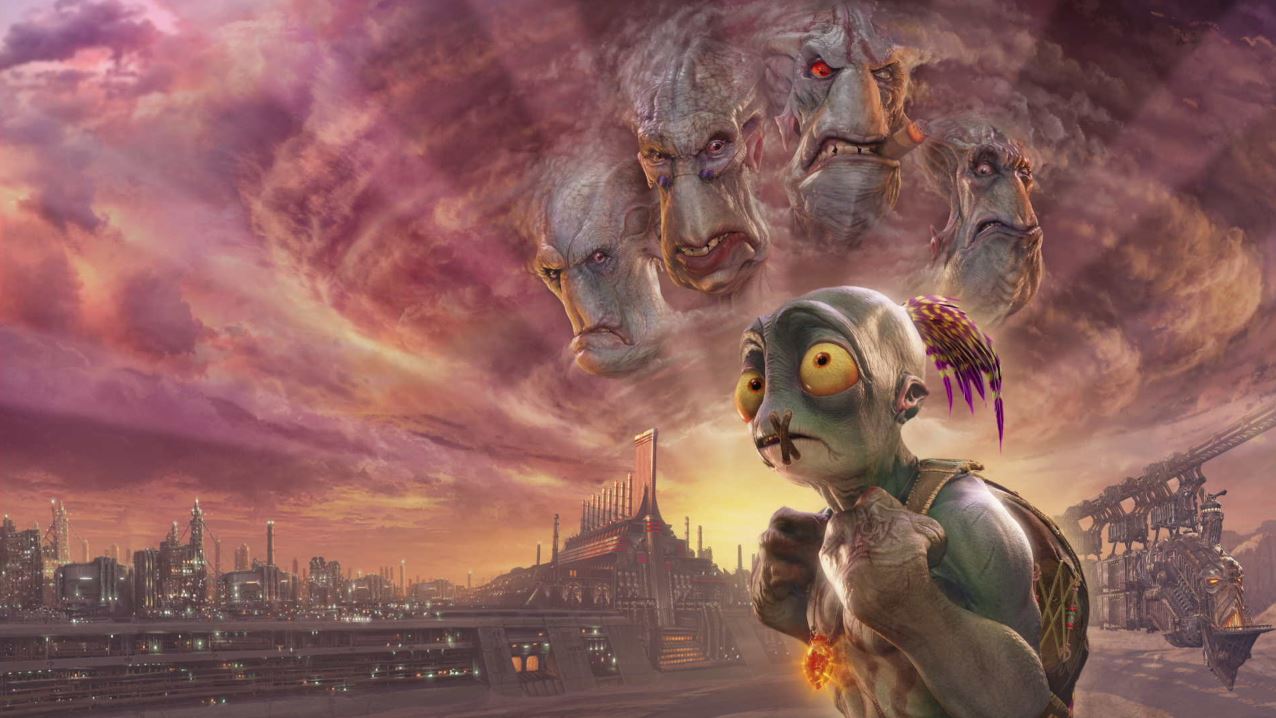 Oddworld Soulstorm PS5 Review – Playstation’s favourite stitch-lipped Mudokon is back for another shamanic rescue mission. Described by Oddworld Inhabitants as a reimagining of 1998’s Abe’s Exodus, Oddworld Soulstorm is a direct sequel to 2014’s Oddworld: New and Tasty (a remake of PS1 Classic, Abes’ Odyssey).

In reality, Oddworld: Soulstorm is a completely new entry in the franchise, staying loyal to the stealth puzzle platforming roots but expanding on the formula. Abe’s new adventure lacks the polish of what you’d expect to see on a big-budget PS5 title, but is nevertheless an excellent return to Oddworld, and a genuinely unique experience you can’t get anywhere else.

Old But New And Tasty

Soulstorm is barely recognisable in the initial moments, as it throws Abe into unfamiliar predicaments. Fleeing the onslaught of Glukkons and Sligs, Abe must make a path by throwing bottles of water to extinguish the obstructing flames. This is the player’s introduction into the games inventory system, and the secret sauce of Soulstorm’s core gameplay. 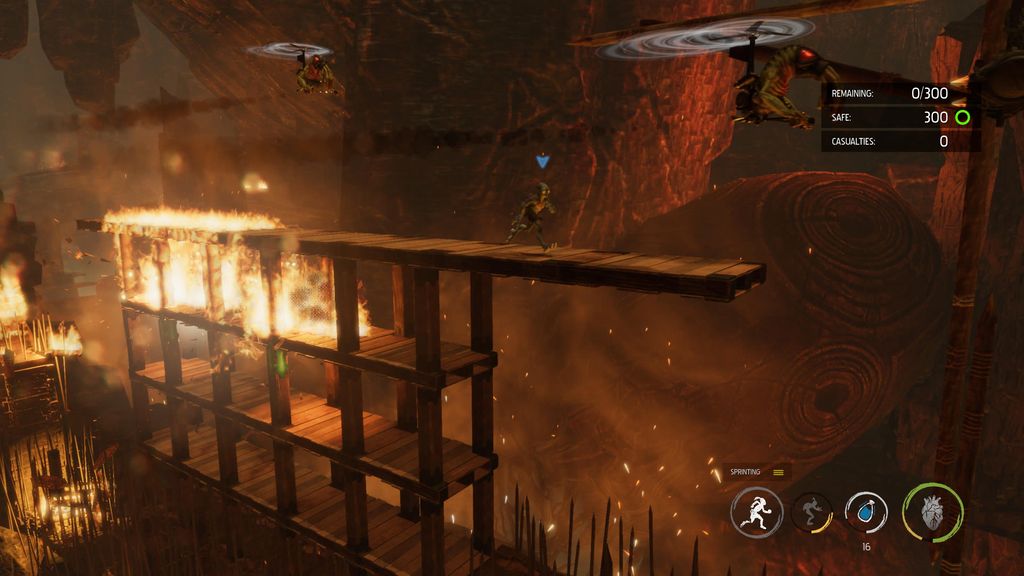 Abe can now loot for crafting items and utilise them with a sense of agency uncommon in platformers. Unlike other Oddworld games, Soulstorm gives the player an array of offensive options, not only to solve puzzles but to take down enemies in inventive ways. For example, Abe can use a combination of items to set the environments ablaze, destroying flammable objects and enemies alike.

With these systems, you have a number of ways you can complete a level; but thanks to the game’s design, you are still limited enough that it remains a challenge. The crafting menu itself is in a pause screen, but it is easy to use, and can be toggled so quickly that it never feels jarring enough to break the flow of gameplay.

Aside from the new mechanics that reinvigorate the franchise, Oddworld Soulstorm remains loyal to the gameplay that brought the franchise to prominence. Possessing a Slig and clearing house has never felt as good. Likewise, sneaking through a danger zone with a band of rescued Mudokons is as rewarding and challenging as it has ever been. Better still, you can now arm your Mudokon companions with thrown items, resulting in hilarious melee combat that complements the humorous tone of the game. 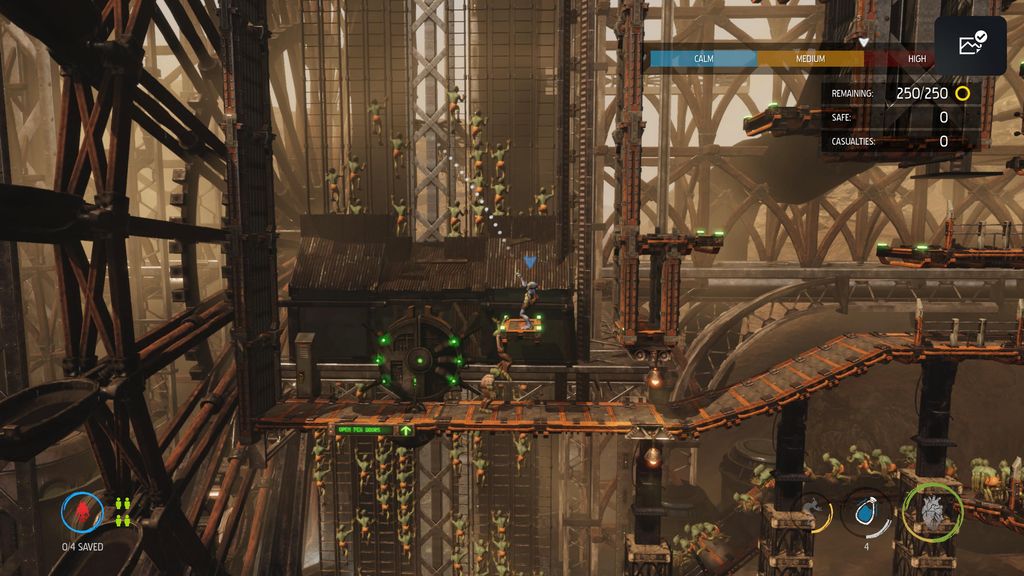 Soulstorm has really managed to recreate the feel of movement and positioning from the earlier games, although this might be a more nostalgic driven choice than a practical decision. Sometimes it can feel a little fiddly to place Abe appropriately to interact with something, especially when the background and path are not parallel to the camera. It isn’t anything major. If anything, it’s just another factor you have to coordinate with trial and error, in a game built for that style of play.

A lot of things hit right with Soulstorm straight away. The charming animation reminiscent of 90’s Oddworld is there from the get-go, and along the way, you get all the dark humour so fondly remembered in the PS1 classics. It takes a special kind of artist to make dying appear so comical, and Oddworld Inhabitants manages to capture that spirit, even in the most brutal impalements.

The 2.5D style platforming works well, as it manages to create an awesome sense of depth with frequent vistas of the background. What’s more impressive is that in many, if not most instances, the background isn’t just there for effect, but is, in fact, a reachable part of the level. The incorporation of winding 2D paths and moving in between different layers of the level makes for a much more involved experience. 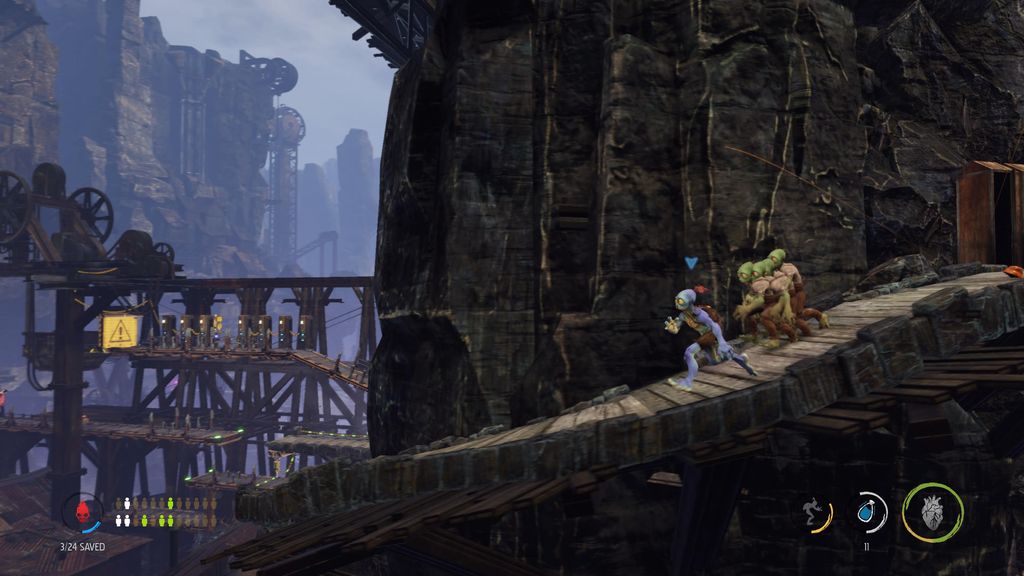 Due to the aforementioned level design of overlapping layers of accessible scenery, there’s always a high level of geometry, and the game is visually intriguing most of the time. However, that isn’t to say the game looks perfect. There are a couple of graphical elements that somewhat contrast your expectations for a PS5 release.

Much of the texture detail seems to be of low fidelity and it is particularly noticeable in the rocky terrain of the opening levels. Additionally, a lot of geometry and models have slightly noticeable jagged edges that shimmer as the camera moves. There are, or course, limitations to any game’s design, both computationally and in development time, but it’s hard not to imagine Oddworld Soulstorm could have released a bit more polished.

Other than minor graphical blemishes, the game mostly performs well at a solid 60 FPS. Unfortunately, a design limitation means that the performance will tank quite hard every time a checkpoint is reached, which can be slightly jarring. Sadly, the game has also released with a fair few bugs, which are continually being addressed with patches. At its worst, you can get stuck respawning at a checkpoint, only to be murdered immediately by Sligs that haven’t reverted to their default position. The only fix has been to restart the level, potentially losing an hour of progress. 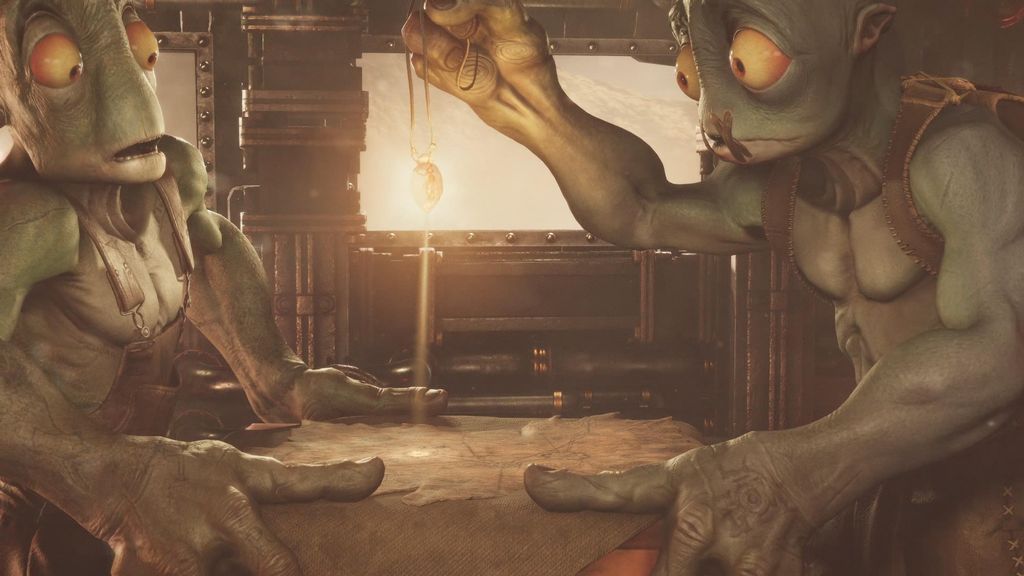 Save The Mudokons, Save The World

With a total of 17 levels (2 of which are secret), there’s plenty of meat to sink your teeth into. Most of the game revolves around stealth and puzzle-solving, but there is some welcomed variety from time to time. For example, a boss battle on a moving train, and occasional all-out scraps with the Sligs as you protect a herd of fleeing Mudokons, were highlights of the experience.

The way Oddworld games have always been designed is with a ranked playthrough in mind. Indeed, just like the previous games, you can run through the game hardly saving any Mudokons. However, should the player do this, they will receive the bad ending, and not gain access to the final two levels. The crafting system gets tied into this element of the game. You could probably mostly ignore it, but it’s essential to solving the trickier optional puzzles in the game. It all culminates towards that sense of agency that the game does well to inspire.

The story runs parallel to that of Oddworld: Abe’s Exodus, but fleshes out the various sections for a more emotional narrative. The Oddworld games have always been mostly a humorous endeavour and Soulstorm is no exception. But, Oddworld Inhabitants have done well to retain the same tone whilst adding a little more heart and context to the adventure. Additionally, the pre-rendered story cutscenes look incredibly good, despite the accompanying dialogue not being as equally inspired. 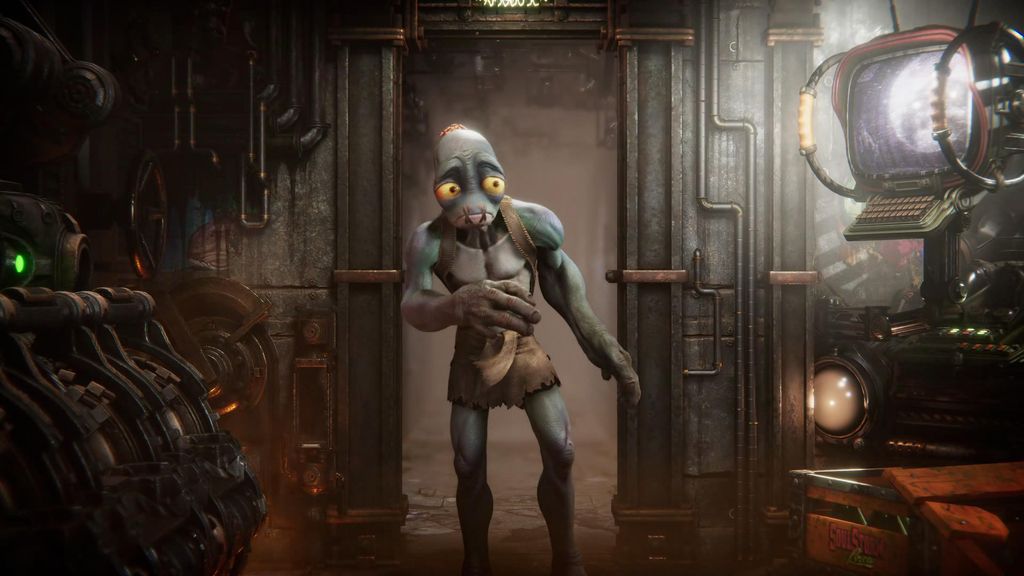 A Perfect Concoction Of The Past And Modern

In a climate of video games that are becoming increasingly less diverse, Oddworld: Soulstorm is a breath of fresh air. It’s a perfect brew of nostalgia and innovation. Moreover, there’s just nothing like it out there on PS5 at the minute. The imaginativeness of the gameplay and level design pay off for a thrilling challenge with plenty of charm.

The visual experience doesn’t carry the excitement of next-gen but still manages to create some amazing scenes using overlapping levels and depth. Ultimately, it will be considered a niche game, but Oddworld fans and novelty seekers alike have a rare treat to enjoy with Oddworld Soulstorm.

Oddworld: Soulstorm in many ways is the peak of the Oddworld franchise. Oddworld Inhabitants have taken the hallmarked difficulty and dark humour and revamped it with innovative, new gameplay features and some really cool physics. It's only slightly held back by its overall presentation at launch, but despite this, it largely remains a stellar experience with lots of replayability and challenge for those who are Glukkon for punishment.