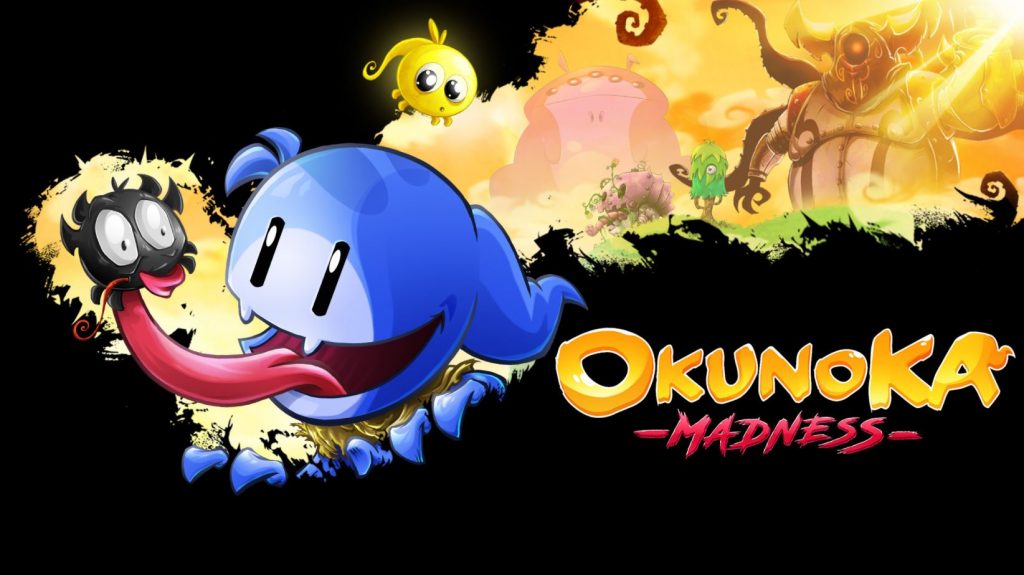 OkunoKA Madness PS4 Review – OkunoKA Madness is a hardcore platformer developed by Caracal Games and published by Ignition Publishing. A rare gem in gaming today, OkunoKA Madness delivers an extremely fun and fast-paced experience that will have you going back for the best possible times and highest score.

‘Quirky’ Doesn’t Begin to Describe It

Right off the bat, I was intrigued with OkunoKA Madness purely because of its artistic design. I get an incredible after-school cartoon vibe from everything about the design, from the character models to the enemy and hazards, to the level design and even with the story. There are no animated cutscenes, just still images which describe the general events of what is going on. Though I would have loved to see a fully animated video at the beginning and conclusion of each world, the art is still beautiful and the storytelling works perfectly fine.

The character models specifically are really creative. The protagonist and hero of the story, Ka, looks like this spirit sort of lizard creature, who is both cute and weird at the same time. What’s more intriguing is that there are a number of different designs for the character you can unlock, though it seems most of that comes from completing different objectives outside of the main story. Out of what I have unlocked however, my personal favourite is a design that looks like a mini xenomorph, something I’d never think was cute, but it is.

Enemy and hazard designs also become increasingly weird as the game goes on, but all of it fits within the weird world the developers have created. The level design is probably my favourite aspect of the game’s overall look. The backdrops for each level feel alive, not just because some of them have dynamic aspects to them, but because they are so well detailed. They give you a great sense that you’re actually within a larger world outside of this little section in which you’re running and jumping in.

All of these creative designs get wrapped up in this nice little package that feels coherent because of the game’s sense of humour. Out of everything, be it gameplay, level design, platforming challenges etc., there is one thing that I love most about OkunoKA Madness. Your goal in each level is to reach a corrupt spirit, eat it, then poop it out to purify it and turn it from black to gold. It’s just plain hilarious. The game even has a little encouraging sound that plays when the animation completes. Watching your character first grimace the way we all have during a nasty bowel movement, then sigh with relief and excitement when it’s over is just so amusing to me, I’ll never get tired of it.

OkunoKA Madness may look cute and fun, and it is, but that doesn’t mean it’s easy. It’s clear that the developers were heavily inspired by games like Super Meat Boy and Celeste, two incredibly difficult and satisfying games that test your platforming skill. OkunoKA Madness fits right in with them, taking more from Super Meat Boy than anything else, but executing it all extremely well. The way Ka runs, jumps, wall jumps, and flies across levels over spinning blades and moving hazards is very reminiscent of Super Meat Boy. Which, is not at all a bad thing. The platforming in OkunoKA Madness is almost just as tight as in Super Meat Boy, but not quite as polished I’d say. All in all, it still feels great to control and plays very well.

Where it draws from Celeste more I would say to be its incredibly creative level design. Not only is the actual design of each level fun to navigate, but they can also be very challenging even just in their placement of different platforms and walls. Though I will say, a few levels suffer from being a bit too overcrowded and felt more like the game was feigning difficulty by putting a bunch of hazards and enemies on screen at once.

The creativity in the gameplay doesn’t stop there, thankfully, because it is here where OkunoKA Madness is able to differentiate itself from Super Meat Boy, Celeste, and other games like it. Ka has the power to call upon or do away with certain coloured platforms that are represented by ice, fire and electricity. You swap between having the blue, red or yellow platforms in play to create a path to the goal. You can go back and forth between them without having to go through the same cycle each time, a feature that helped to make it feel more exciting to quickly swap which colour would be activated at a time. This one mechanic opened up a whole new way of navigating the levels and figuring out the puzzle within each one. It’s the key feature in OkunoKA Madness that makes you feel elated when you’ve just finessed a particularly difficult level.

The only two issues I have with the gameplay are that when you die (and you will die), the time it takes to go right back to the beginning of the level and try again is at the very least a second or two too long. It seems like a small thing, but when you’re trying the same level again and again it adds up, and only serves to help frustration fester. The other problem I have is the boss fights. In an otherwise extremely creative game, it just feels lacklustre to not see the same effort in the four boss fights within the main campaign. Where each main level might have felt similar to other games but played like its own unique concept, the boss fights are surprisingly bland. There was nothing about any one of them that I hadn’t seen in a previous game, and even though the last two used the platform switching mechanic in more interesting ways, they still as a whole pale in comparison to the rest of the game.

It’s Bigger On The Inside

The main story to OkunoKA Madness admittedly is short. It consists only of four worlds, with 20 levels in each. OkunoKA Madness offers players the chance to constantly reach for higher grades and better times overall though, so you can go back and aim for the ‘S’ grade on each level as many times as you like. There’s also an extra 20 levels that are not part of the story under ‘Madness’. This is where the game really amps up the difficulty and offers a set of 20 extreme challenges only for those with the platforming prowess to complete. I definitely recommend trying these out after you’ve beaten the main campaign.

What’s more interesting though is the inclusion of its Time Attack mode, which lets players speed run through the levels either in the order they appear in the story or in your own custom way. You can pick and choose up to five individual levels or run through whole worlds at a time to show off your fastest times and scores. The mix and match element helps to ensure that you won’t get too into a rhythm of the same levels over and over, but rather get you into a flow of just playing the game. All this together makes for a lot of content overall that is sure to keep you busy for quite some time.

OkunoKA Madness does a lot of things extremely well and borrows the right aspects from the games it is inspired by. With its own unique design and gameplay twist on it all, OkunoKA Madness delivers an extremely fun time for anyone into hardcore platformers. I highly recommend it as a game that doesn’t try to do everything, but instead just does a few simple things really, really well.

OkunoKA Madness is a great platformer that is easy to recommend for those looking for a good challenge. It only loses points for some minor annoyances like cluttered levels, occasional difficulty spikes, and disappointing boss fights.