OlliOlli World Void Riders DLC Review (PS5) – When OlliOlli World originally came out, I was immediately in love with how well Roll7 had rebooted a franchise I once believed to be long dead.

So naturally, getting the chance to review its new DLC got me excited, and I was thankfully not disappointed.

The Void Riders DLC is more of what makes the rest of OlliOlli fun, with the introduction of a whole new mechanic, gravity reversal. 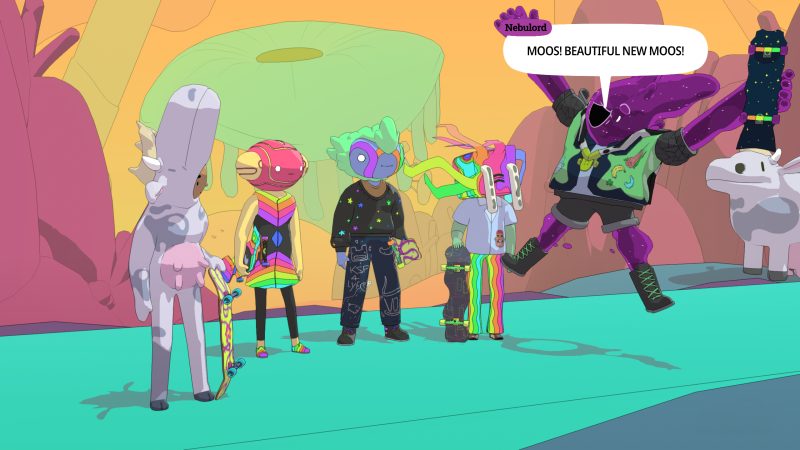 To access the DLC, you’ll first need to make your way through the game to at least level Route 666 in the third section. Of course if you’ve already played through it, the DLC will be available to you once you buy it.

The first thing you’ll be introduced to in the DLC is a new mechanic, beams of light under which you can grab your board to reverse gravity. It’s a very cool play on being abducted by aliens, which is part of the whole DLC’s theme and narrative.

After the tutorial, nine levels across the first three main areas will be unlocked, and completing any two out of three per section gives you access to the boss level for the area.

It should be no surprise that the levels contained fit right in with the rest of the game’s creative and eclectic vibe. 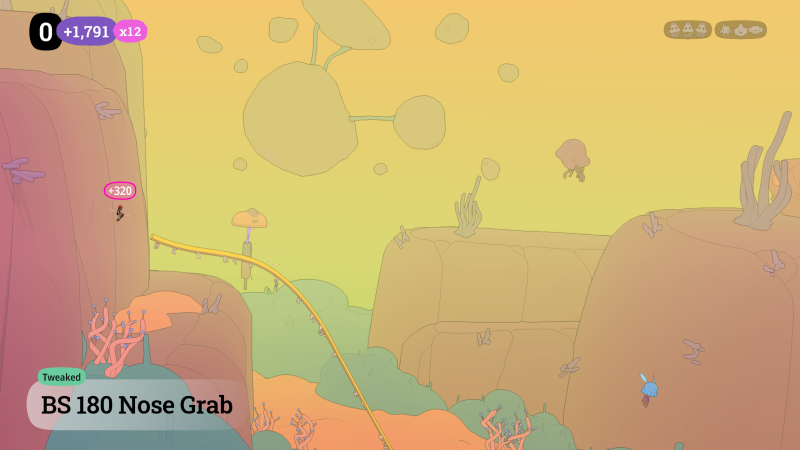 The main difference however is that there’s a clear uptick in the difficulty across all the levels, which helps to make it more clear as to why Roll7 wants you to play through most of the game before being able to access the DLC.

In fact, you’d almost be better off if you play through the entirety of the campaign before going on to the DLC. At least I felt better for it, having beaten the game versus where I remember I was when still originally getting through Burntrock.

That’s not so much a knock on the DLC, as it is a warning. Because the levels included are some of the best I’ve ever seen from Roll7.

It Really Is Out Of This World 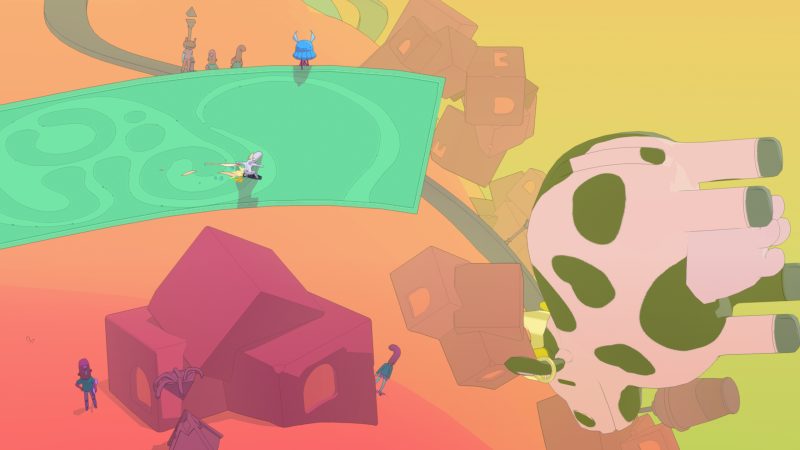 The design and scale of these levels from top to bottom is absolutely incredible, and continued to impress as I played more of the DLC.

As creative as the levels in the main campaign are, these nine levels all seem to up the ante in new ways, constantly testing you to both keep up your scores and keep up with the terrain.

And each level was quite the handful, in terms of dealing with obstacles and sudden changes in track, while also keeping up your combo.

Some of the levels definitely contain the most creative uses I’ve seen when it comes to how a track plays out, with parts of it appearing just before you’ll need it, and levels that have you flying through the air for what feels like forever, only to catch the grind perfectly at the right moment.

It’s a feeling that never gets old, and is part of the reason why these games work so well. 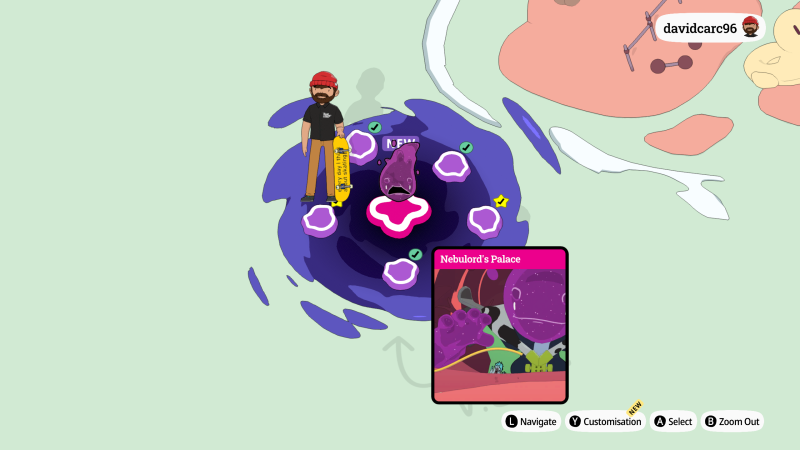 There are more than just nine levels in the DLC – in total there’s actually 18, but 15 of them are the core levels, while three are boss levels.

The remaining six levels left after you’ve beaten the initial nine and at least one boss level, are probably the best levels in the game, period.

Altogether, across some 15 levels are the best of the bunch when compared to the rest of the campaign. From their visual design to level design, this is Roll7 at their best so far.

Not All Levels Are Equal 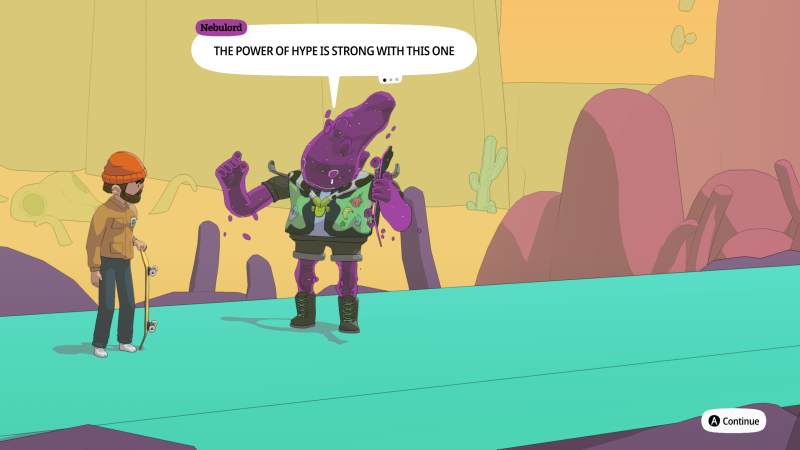 Notice that I left three levels out of my count in saying they were Roll7 at their best. That’s because the boss levels aren’t in that same class. They’re not bad, per say, but they just aren’t regular levels, and in turn felt much shorter, less satisfying than a regular level.

One had you go around the same area until you did a wallride across each wall, and the other had you going back and forth through a whole zero gravity area to collect 14 piñata’s.

Though I appreciate the format of the levels changing to present something new, I almost wished they’d each been race levels like the first one, each of them perhaps getting more difficult than the last.

I would have liked that extra challenge, though since you only need to complete one of them to play the rest of the DLC, overall the levels don’t feel as categorically strong as their comrades. 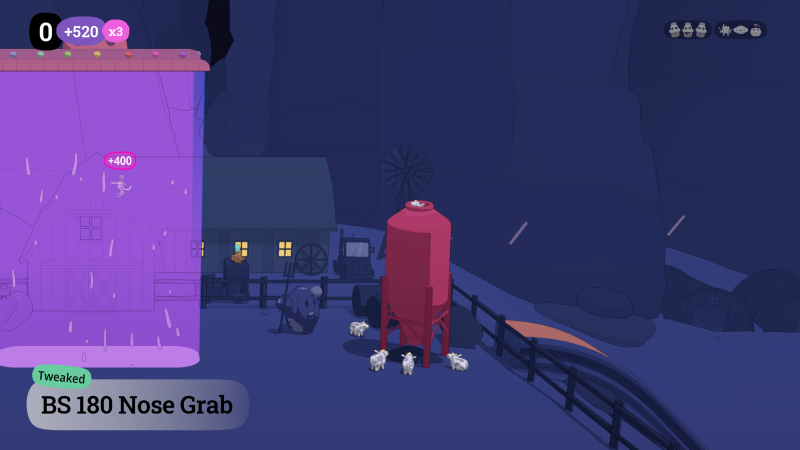 While the boss levels aren’t up to snuff compared to the rest of the DLC, the other 15 levels included are more than worth the time and extra financial investment into this game.

It’s almost unfortunate to see that the last two sections of the game don’t get their own set of four levels, but it’s worth noting that there ought to be more DLC coming for OlliOlli World.

What I did appreciate greatly though was how few tutorial levels we got in this DLC, there was only one, in fact. A gripe I had with the campaign is that far too many levels were dedicated tutorials, which all felt like they could have been made to not take up a whole space on the map.

If you were a fan of OlliOlli World, then there’s no denying that you should play the DLC as well. These levels are well worth the time. 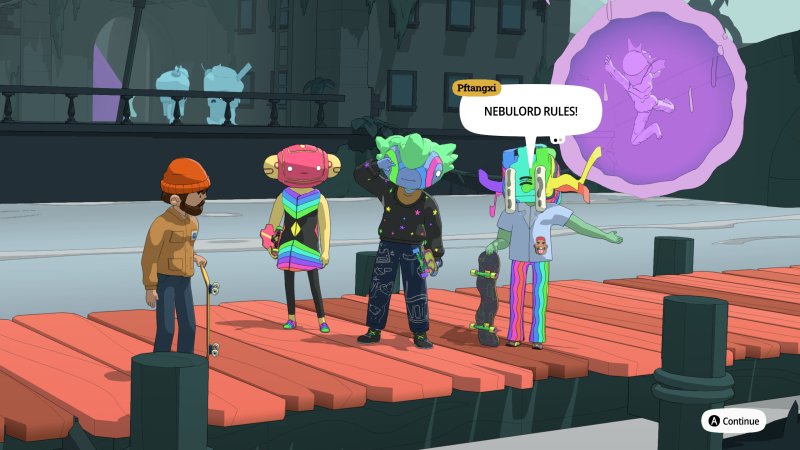 Go play them yourself and remember, All Hail Nebulord.

OlliOlli World's Void Rider's DLC is definitely a must-buy for fans. It houses the best levels across the rest of the game, and includes some of the most visually pleasing levels in the entire game. Though the boss levels are somewhat disappointing, that does little to reduce how fun every other level included in the DLC is.