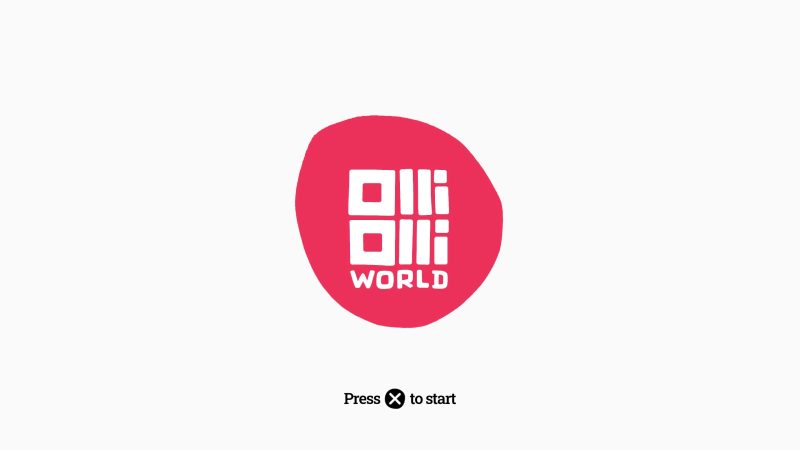 OlliOlli World Review (PS5) – If you had asked me whether or not I ever believed we’d see a new OlliOlli game prior to OlliOlli World’s announcement, I would have said no.

Frankly, I was very happy to have played the first two, and to keep playing them as I still do. Now that we have a new OlliOlli game from Roll7 however, I couldn’t be more overjoyed.

OlliOlli World is without a doubt the perfect reboot this franchise could have asked for. It’s more accessible, more colourful, and most importantly the most fun I’ve ever had playing OlliOlli.

Do An Olli, Meet Some Friends 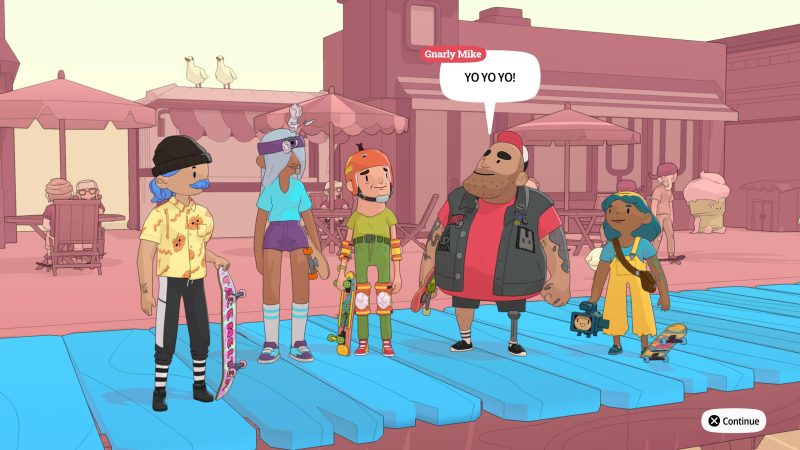 It’s a wild thing to see an old favourite rebooted in such spectacular fashion. As a long time OlliOlli fan, this reboot resonates with me similarly to how the God Of War reboot resonated with me.

The level to which it has been reimagined honestly feels comparable, and I’ll explain why. In the original OlliOlli games, (both of which you can still play on PS4 or PS Vita, if you have one), those games were about high scores.

In fact, they were about nothing but high scores. Achieving those high scores while being able to navigate complex levels that each try to trip you up when possible.

I mean it when I say I love both of the first two games, but while that hyper focus cultivated a strong gameplay loop foundation, it ignored other aspects of the experience.

That’s entirely changed in OlliOlli World. It’s title is fitting, as I’ve stated before, because it really is a whole world for you to dive into. 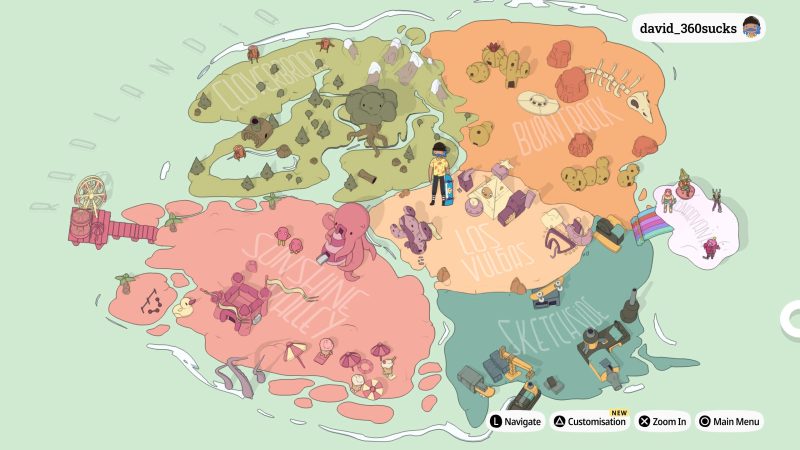 Backgrounds in the first two games that seemed visually appealing at the time are entirely forgettable compared to the vibrant, lush regions you explore in each level.

Your skating experience is as much about taking in the world around you as it is about high scores. It’s not just a perfect balance, but an extreme elevation of what OlliOlli was.

A huge part of that comes from the characters you meet on your journey towards meeting all the skate godz to achieve Gnarvana and become the next Skate Wizard.

That’s another thing – there’s actually a loose story to follow, all about your journey to Skate Wizard. It’s enough to keep the main cast of Mike Drop Mike, Chiffon, Dad, and Suze around wherever you go.

And that’s what counts, because having them around is amazing. They’re a loveable bunch who have a range of good jokes to great puns, and I always appreciated their company.

Along with the quirky and fun characters you’ll meet within the different regions of Radlandia, it all serves to build a deeper connection with the game, and your time spent its world. 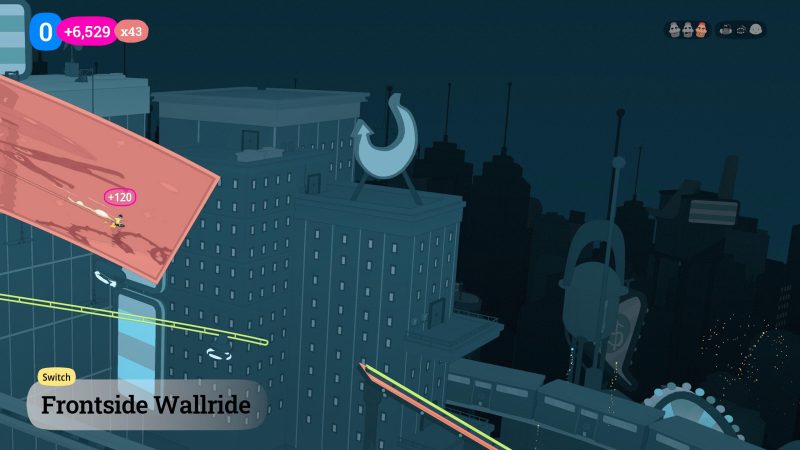 As much as I’ve gotten a whole new level of enjoyment from the more detailed and fleshed out world in this reboot, it wouldn’t work if the gameplay wasn’t there to back it up.

However it would be hard to imagine Roll7 just forgot how to make a good OlliOlli game, especially after the rock solid foundation built in the first two games.

The core gamplay loop of OlliOlli is still great. It’s even more improved in OlliOlli World because of the sheer depth to each level.

It should be noted that the most creative and impressive levels are towards the back end of your journey across Radlandia, but that doesn’t mean early levels won’t blow you away either. 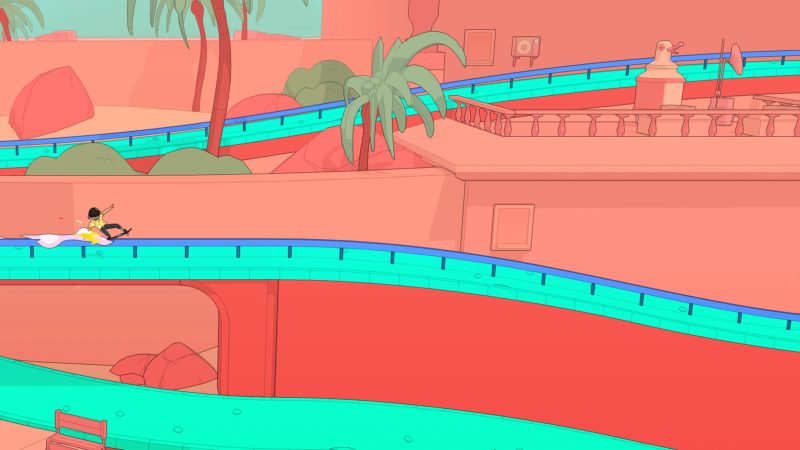 The inventive knack for level design that has always existed at Roll7 clearly hasn’t gone away, and has only gotten better over the years.

Part of this comes from new features and quality of life changes to gameplay. Smash grabs are an added obstacle challenge that not only make levels more interesting, but also help to improve your ability to quickly adapt in and out of certain tricks.

Each level also contains what’s called the “Gnarly Route”, which is a more challenging path that is also a surefire way to a higher score.

You also come away from most gnarly route’s feeling like a total badass, so I highly recommend you seek them out.

Be The Skate Wizard You Want To Be 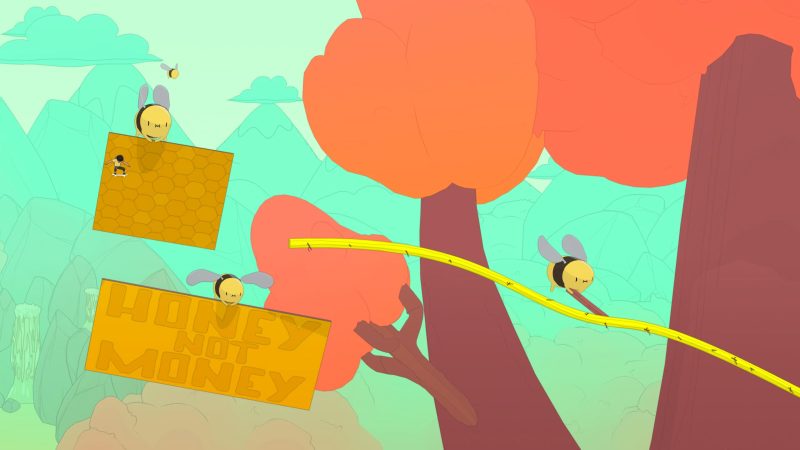 OlliOlli World succeeds for all the reasons I’ve already talked about, but those reasons stem from the first moment you have when playing.

This is very clearly the most expressive OlliOlli game ever, but that doesn’t just mean art style and bright colours. It also means how you as the player are able to express yourself.

The very first thing you’ll do before hopping on a skateboard is deciding what your skater avatar will look like, and the game immediately begins to build a connection with you just in the variety of ways you can express yourself with this avatar.

More than just having crazy hair colours available for fun expression, the character customization has more options that are specifically geared towards being inclusive than I’ve seen in most games. 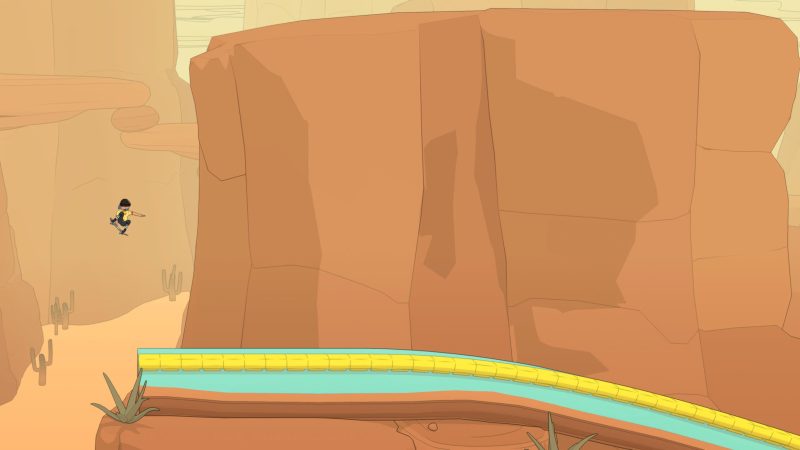 There’s just no place for negative energy that says you can’t be who you are in Radlandia. It’s a tone that is palpable while playing, and serves as another layer explaining why this game is just so joyful.

Being who you are and expressing yourself how you like is practically the mantra with which the people of Radlandia live their lives, and Roll7 wastes no time in making you feel like a part of that.

A little touch which I believe greatly helps is seeing different skaters during each loading screen. Going between levels, or back to the map will lead to a quick loading screen that will each time be featuring another player.

Seeing what other players come up with for their avatar designs, and knowing that they’re seeing your avatar creates even just a small connection, making you feel like a part of the OlliOlli World community.

Beat My Score, I Dare You 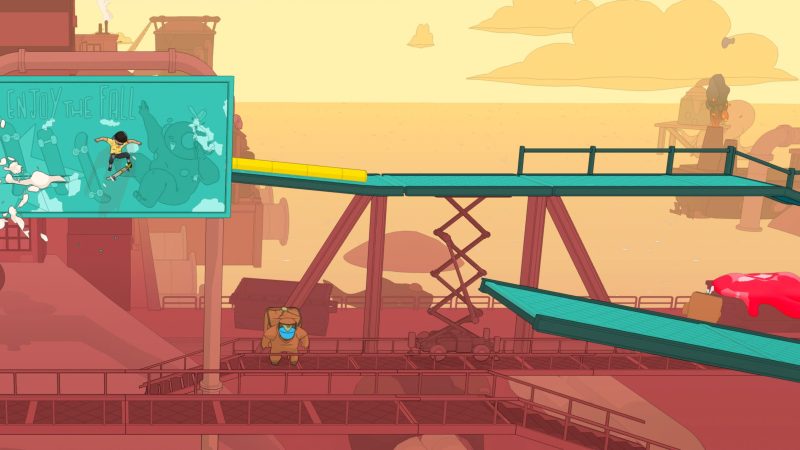 As I’ve made it clear, OlliOlli World isn’t like it’s predecessors in that it’s not all about getting high scores. That doesn’t mean it’s competitive streak is entirely gone from the nature of the game.

Like everything else in OlliOlli World, that side of the experience has been improved ten-fold.

Firstly there are the levels within each region with leaderboards for you to climb. OlliOlli World will even mark the player above you as your nemesis, if you start playing a level again to try and beat their score.

That is just the base layer of the multiplayer experience. There’s now a whole new mode called Gnarvana, which is split between the Gnarvana Portal and the Ganarvana League.

The portal is a mode where you’re able to create your own levels by adjusting three modifiers, which are the difficulty, length, and which region’s style it’ll be designed in. 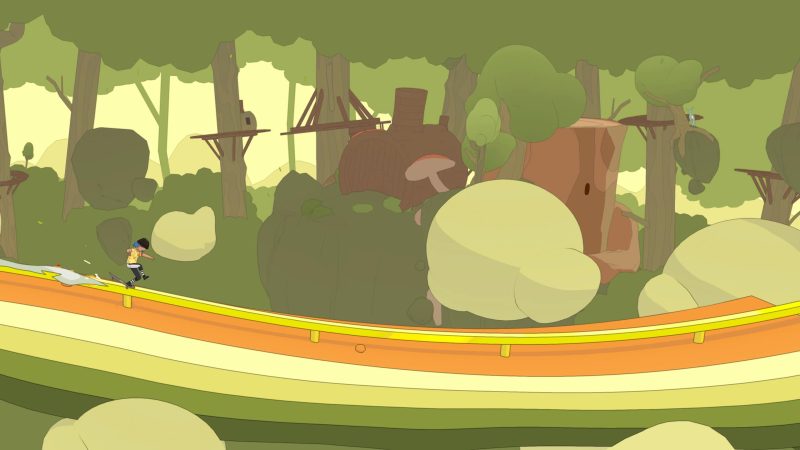 You can only utilize a region’s style after you’ve unlocked it, so this mode works best after having completed the whole campaign.

Regardless though of having one or all five regions unlocked, you can still create levels that feel fun and creative.

The Gnarvana League is a ranked league where players compete against each other for a high score on a newly generated level each day.

If you’re on top or at least near the top for that day’s leaderboards, you rank up.

Now it should be noted that within the small pool of other media playing the game prior to launch didn’t really allow for the fullest expression of the online Gnarvana modes, but even without a full player base it is easy to see how one could quickly become addicted to being number one each day. 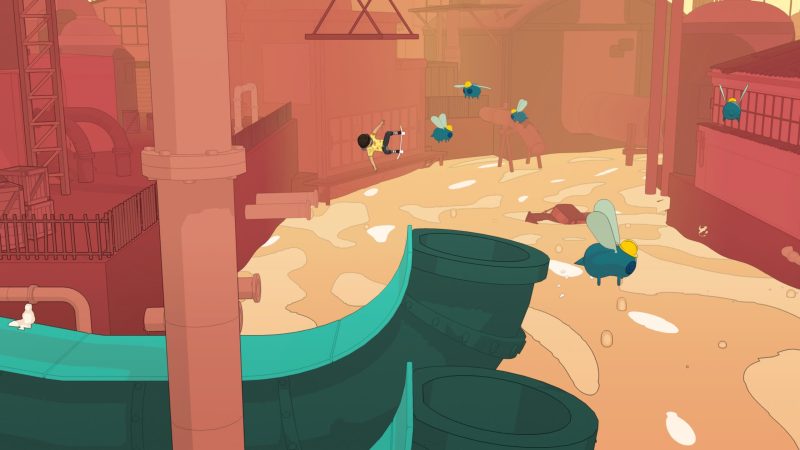 Through intricate and creative level design, a full fledgling world that resonates with life no matter where you are in Radlandia. Evolving the core gameplay to newer heights, while also introducing quality of life touches to make the base level gameplay accessible for everyone.

Inclusive character customization practices, and characters that will make you laugh, and who you’ll grow a connection with over nothing but a series of short, ten second conversations.

OlliOlli World is a perfect execution of what it means to bring a franchise back into the world, keeping the core gameplay that let fans fall in love in the first place, while elevating it and still making it feel like a game anyone can jump into. 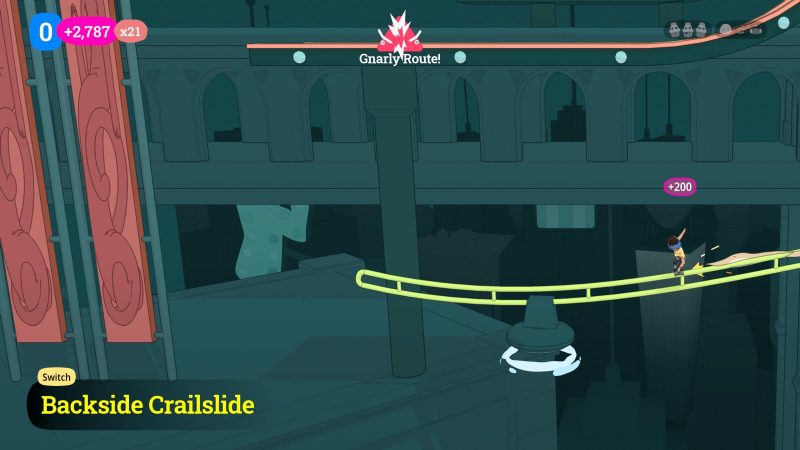 If you really had to press me to say anything negative about OlliOlli World, it’s just that the tutorial system was stretched out across the entire game.

While that’s not inherently annoying or an issue, it did strike me as off at how many levels necessary for continuing through each region were just short tutorials.

By the last region all your tutorials are side quests that you can choose to do or not, and I would have much preferred that the whole game over dedicating what could have otherwise been another intricate and creative level to a 20 second tutorial.

It bothered me enough to be noticed, but that’s really the only thing I noticed in all my time spent with it.

I can’t recommend OlliOlli World enough. It is a gorgeous little game with a deep gameplay meta that will keep you coming back for years, executed to perfection.

OlliOlli World is an incredible reboot and the perfect evolution of the OlliOlli franchise. It's vivid and bright levels combined with the creativity in their design make for a deep gameplay meta that will keep you coming back for years. To put it simply, Roll7 did for OlliOlli in 2022 what Sony Santa Monica did for God Of War in 2018.