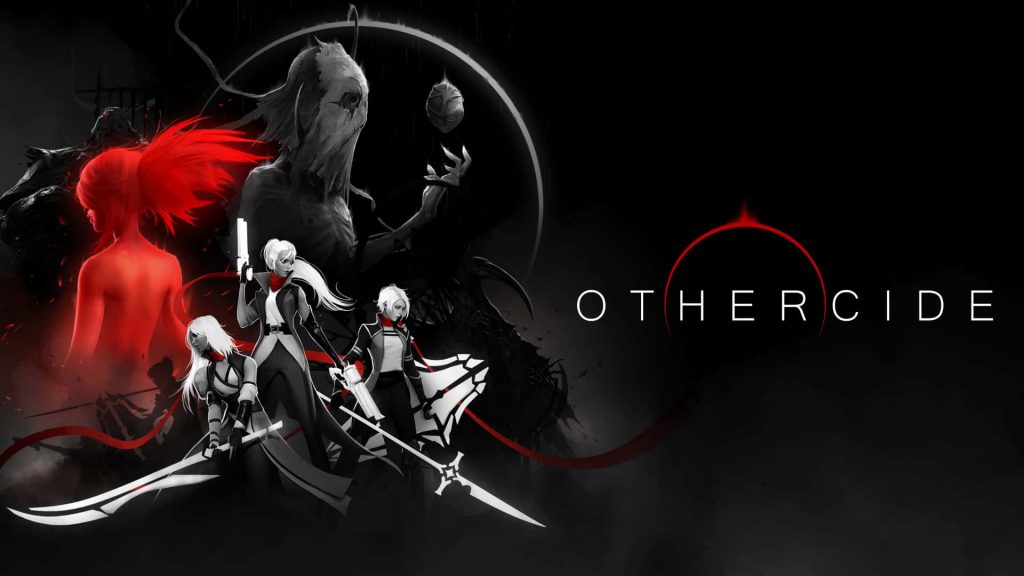 Othercide PS4 Review – It’s rare that tactical and strategy games diverge from the typical war settings we see in the genre. With gritty landscapes and demolished building that are now rubble, the genre can feel a bit samey. But, Othercide is a strong strategy game that is elevated by its gruesomely gothic world, nightmarish atmosphere and enemy designs and perfected progression curve. Lightbulb Crew have created one of the most visually striking games of the year and it’s an offering that everybody should try.

Othercide is set in a monochromatic world which has become infested by the Suffering, dreadful contorted monsters that are made from the worst sins of Humanity. The only thing that stands in their way are The Daughters; an army comprised of echoes of the greatest warrior to ever live. You birth them, shape them, and even sacrifice them, building up your army and forming the group that will be able to take down the monstrosities waiting in each fight.

The story is never the focus of Othercide, but where it lacks in narrative it makes up for in atmosphere and environmental and enemy design. Othercide is a gothic spectacle with enemies looking like they were pulled out of classic gothic literature and stories. When it comes to their movement they will contort their heads, spasm and jerk their body side to side and creepily dash towards you.

Bosses as well play into this haunting design with them towering over your team of daughters and having some excellent designs based on the era they represent. These bosses are also voiced with the creepy Deacon of the Cellar Prison Era commenting on your daughter’s luscious legs and lips, whilst The Surgeon in the Plague Era talks about skinning your daughters and studying them. Othercide isn’t a tame game, but the atmosphere is stellar and it leans far more into the roots of grotesque horror than Bloodborne ever did.

This is all built up by the monochromatic visuals (which is accented by the red blood and red ribbons on the daughters) making for a visual treat and one of the most striking games I have ever seen. The music is also excellent with a nice blend of gothic horror instrumental and big bombastic themes when you fight a boss.

An Army You Can Craft To Your Liking

Your team of daughters is comprised of three different classes. The Soulslinger comes equipped with two pistols and does a light amount of damage from afar, but is great at getting out of sticky situations and interrupting enemy attacks. The Blademaster is your standard melee class. Equipped with a large sharp ended blade, she can do an immense amount of damage and quickly hop across the battlefield. Finally, the Shieldbearer is your tank, equipped with a shield and spear, she can pull an enemy’s focus, withstand damage, and allow your other daughters to sneak up from behind to land devastating backstabs.

There is a fourth class, but I am not going to spoil it too much. However, it is unlocked partway through the game and it adds a twist to the traditional combat you have learned by having her focus on AoE damage.

These classes can then be taken into your traditional tactical game battles and used to flank, outmanoeuvre and outsmart your enemies. At its core Othercide is a standard tactical game, with you pulling from a pool of action points to use different attacks and move around the playable grid.

But, Lightbulb Crew have thrown in a twist: The Timeline. This timeline displayed at the bottom of the screen shows you when enemies will attack and when you will get your turn to strategies. This is on a scale of 100 initiative units and it fundamentally changes how Othercide plays. Usually, you will get to attack every 50 initiative units on the timeline no matter which actions you use or how many of your 50 action points you use up.

However, if you are feeling brave you can delve into a further 50 action points, expanding your options in combat. For example, you can move twice the distance or perform four attacks instead of two. Or you can move to an enemy and perform three powerful attacks instead of moving and only getting off one weaker attack. This comes at a cost though, as you will be pushed back 100 initiative units on the timeline delaying when you will next be able to attack.

This all blends together and works excellently thanks to the amazing amount of synergy you can create between your daughters. Different skills that you can equip to your daughters will move you up or down on the timeline depending on what bonuses they give. For example, one can provide you with 40 armor and also move a teammate up 15 initiative units on the timeline, potentially letting them attack an enemy, whereas without that bonus they would have potentially been attacked by that enemy and possibly taken damage.

Not taking damage is core to succeeding in Othercide as there is no way to heal in combat. Instead, you have to sacrifice one of your daughters at the same level or above to heal the one you want to keep. This creates a stressful but riveting choice over whether to heal now and continue on (but with less daughters to use in combat) or start a new run and begin at the start of the game, resurrect what daughters you can and try again.

The combat is Othercide is a fantastic back and forth of surveying the battlefield, looking at the timeline and running through your options over whether it would be more beneficial to wallop your enemies with damage now and kill them or wait for them to attack and use up their initiative units on the timeline and strike when they have to wait. It’s a great balance and it is what kept me hooked on Othercide. Even now I just want to go back and play another mission.

Othercide is at its core a strategy game but the actual experience of playing it reminds me of a roguelike. The game takes place inside what is called a recollection which is effectively your run through the game. And, within each recollection, there are five eras to progress through, each with seven days, with a boss at the end of each one. These eras do not change and they are in the same order each time.

Within these recollections, there are synapses that you can close. These are your levels or missions. And, when you have completed a synapse you can move onto the next day, slowly progressing to the end of the era and unlocking the boss. These missions vary from a simple hunt and kill all the enemies to helping a Bright Soul (which doesn’t attack) escape the battlefield, which will then allow you to resurrect one of your daughters.

But, it isn’t so simple. Your daughters can only be used once per day, which means that if you want to level them up you will need to birth more daughters using a limited currency or progress onto the next day so they can be used again. Your recollection (run) will end when all of your daughters die or when you choose to manually start a new one.

This means that you can choose to bolster up your daughters in a run by fighting more, but also risking their lives and also chance of them taking damage and having less health for the boss. Or, you can end your run, use what little resurrection tokens you have to revive your strongest daughters and slowly creep forward in strength and increase the skills at your daughter’s disposal and their level.

This choice is one of the best parts about Othercide and the feeling of slowly getting better and seeing your damage increase against bosses in new runs is invigorating. Learning these bosses attacks and crafting your army of daughters around them to take advantage of their weaknesses is one of the strongest aspects of the game.

On top of that slow creep of progression, you have memories which you can attach to individual skills, providing light bonuses like 20% extra damage or decreases the movement range of enemies. Remembrances also provide larger bonuses and can be purchased at the start of each new recollection with shards, which are given to you as you start new recollections. These remembrances give you tokens to resurrect new daughters, skip entire eras after you have beaten a boss, or provide health and damage buffs to your daughters.

These boosts and buffs are vital to success in Othercide because it is a bloody difficult game. Impossibly hard at times in fact. However, it becomes easier, as these remembrances and memories will provide you with the damage increases and buffs that weaken your opponents and allow you to overcome the mountain that is killing them.

Othercide wouldn’t work without these two mechanics and their inclusion allows you to feel the joy and excitement of slowly progressing and overcoming challenges you once thought were impossible.

There are a few nags here though. The game’s challenge can be intensely depressing at times, with you feeling like you will never succeed. On top of that, you lose all your memories when you die, even ones you didn’t equip onto skills, which can delay when you are able to take on the boss again as you need to build up your stockpile of memories.

A Fine-Tuned Gothic And Grotesque Wonder

Othercide is a fantastic strategy game. As someone who has never been entirely enthralled by the genre, this the one that pulled me in and swallowed me up whole with its twisted atmosphere and unique combat system.

I have very little criticisms with the title beyond the initial shock of difficulty and losing memories upon death. Everything here is the best a AA game can get. The atmosphere, music, gameplay are all pitch-perfect.

Othercide oozes style from every pixel of the screen and it isn’t afraid to show it. It has become my favourite game of the year and anyone should give it a go, newbie or veteran of the genre.

Othercide is available for PS4 on July 28.

Othercide is the most pristine AA game I have played. Its haunting world and grotesque creature design cement themselves as some of the best in gothic horror, whilst the unique, timeline-based combat provides a twist on traditional tactical games. Othercide is far more than just a striking art style and everyone should give one of the most unique games of the year a shot.