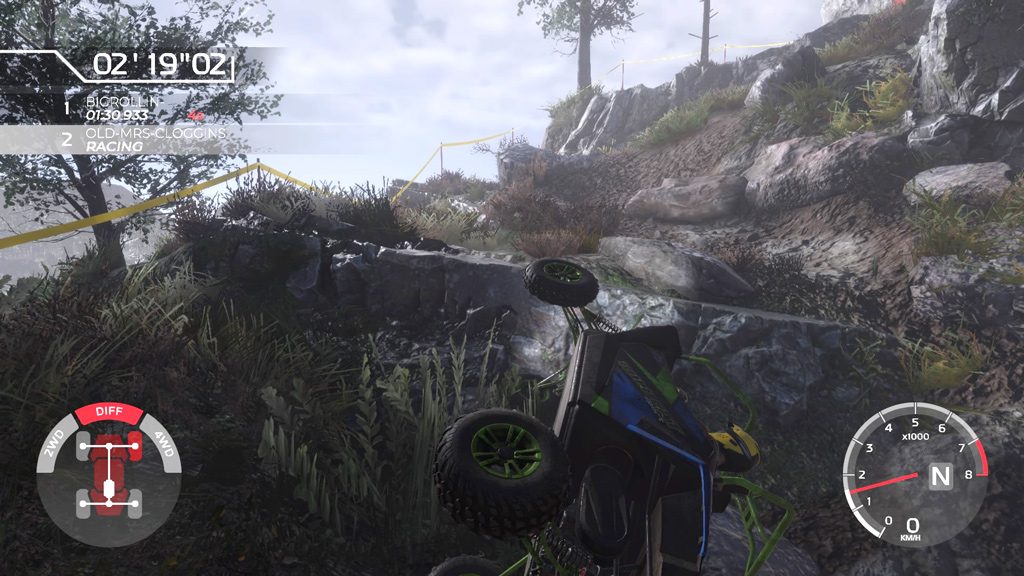 As a deadly pandemic sweeps across the globe and the populace are isolating themselves at home, the average person seeks solace in a hobby or by doing DIY that usually falls by the wayside. Once the chores are done, there’s more time to relax and read a book, watch a film or play a videogame to distract from the ever more disturbing news reports. With that in mind, you might think that ‘Overpass‘ might be an innocuous and enjoyable distraction: after all what could be more relaxing than traversing the great outdoors in a chunky single-seater 4×4? Think again.

The concept behind Overpass is a solid and potentially stimulating one. Using either an ATV (Quad bike) or a UTV (4×4 single seater), contestants race against the clock to complete a punishing course of obstacles and terrain over three laps. A bit like a four wheel, 3D version of Trials. So far, so good.

Naturally, a tutorial (voiced by M. Emmet Walsh) guides the player through what they can expect when they tuck into the the main beef of the game, the career mode. But the tutorial is very hard. Your vehicle spends half of its time upside down but fortunately pressing square for four seconds resets you. And once the game recognizes you’re stuck, pressing circle skips the obstacle in question. But only during the tutorial.

So after the tutorial, you will now have an inkling that things will be tricky but perhaps the tutorial concentrated all the hard bits in one go? Nope. You’ll alternate between being beached on a boulder, flipped onto your back like a filthy mechanical woodlouse, or slapped heartily on the wrist with a hefty time penalty for wandering off-piste towards the oh-so inviting green plains around the fenced off circuit.

As the clock ticks away, you will finally make it to the finish line, and then realize that there are two more laps. That can’t be so bad, can it? At the end of lap two, you realize that you have spent ten minutes attempting to get around again, getting stuck on the same slippery incline which just won’t let you get to the top, or lolling onto your side in slow motion. Yet again. And STILL there is another lap.

Out Of The Frying Pan, Into The Mud

Even if you manage to scrape around the course without falling off, the merest brush against a cone or a piece of yellow tape will incur 2 second time penalties, and not completing an obstacle incurs upwards of a 15 second penalty. The sedentary pace of the game ideally allows for a methodical solution to each of the obstacles as you approach them, but the window of success is so slim for each, that no only will you fail, but you will fail very slowly. Over and over again.

And the thing is, there’s nothing wrong with a game being difficult. Look at Bloodborne. And most of the classic arcade games from the 20th century. The problem with Overpass is that it’s so difficult, it rapidly becomes frustrating, repetitive and tedious.

Between A Rock And A Hard Place

Aside from the risible gameplay, fortunately the team have done a perfectly serviceable job on the career structure and vehicle upgrade opportunities meaning there’s plenty of depth here for those who can stomach the relentless dissatisfaction. There are lots of vehicles too – the ATVs involve tweaking the rider with the right stick to maintain balance (it hardly has any effect) and the UTVs offer a high grip ‘differential’ gearing which reduces steering.

The menus are polished, the mid-Atlantic rock music does its job between events, and the in-game graphics and sound aren’t bad at all. There’s a great split screen option and online multiplayer where everyone does the course at the same time and the ghosts are visible right in front of you which is a great idea.

Mud Wrestling Through A Pandemic

If the game wasn’t so unforgiving, the events were shorter and there was an incentive system for doing well and not constantly punishing you, then perhaps Overpass would be a challenging and fun experience.

One can only assume the developers found a team of masochists to playtest this abomination as no-one else in their right mind would have given the green light to a game which delivers such a joyless and hollow experience.

Overpass is out now on PS4, Xbox One, PC and Nintendo Switch.

There's really no way to gild this filthy lily - Overpass is an infuriating and deeply unsatisfying experience which should be given a wide berth by anyone who values their sanity.