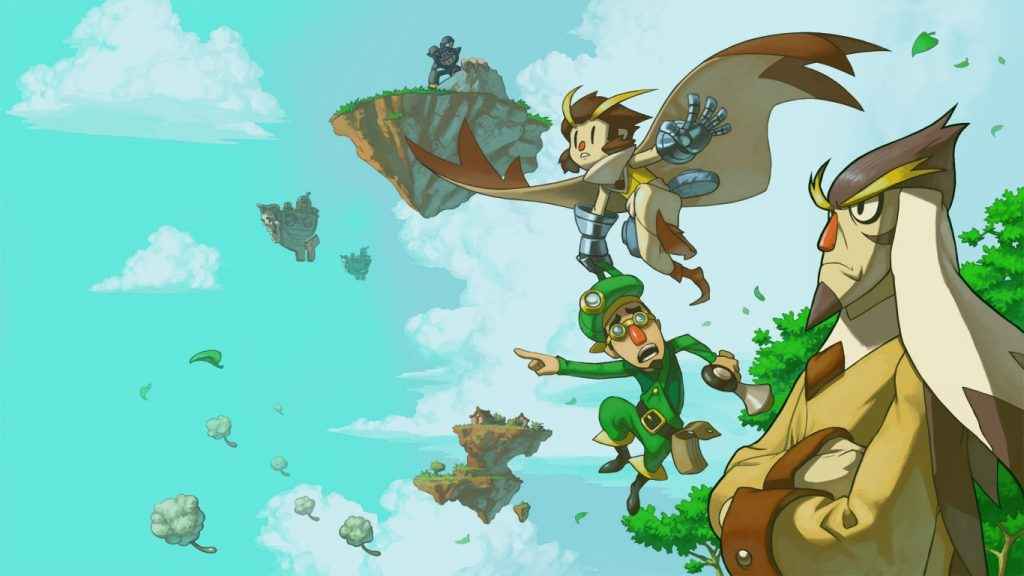 Some ten years in the making, it’s fair to say that Owlboy is the very textbook example of a labor of love. Very often, whenever we wax lyrical about retro games or efforts that seek to elicit that warm, fuzzy feeling of a bygone era of gaming, those games rarely manage to capture the often mercurial essence that made those older efforts so memorable and enjoyable in the first place. Owlboy not only does this, but it also stakes an emphatic claim to be being better than 99% of the stuff that came out back then, too. Look, it’s really quite simple; Owlboy might just be the best platformer on PS4 and you really do need it in your life.

Owlboy review: A Touching And Essential Masterclass In Platforming Adventure

The main protagonist, Otus, is the titular Owlboy, with the very moniker itself conjuring up images of a sky-soaring superhero that effortlessly vanquishes whatever evils lay before him. The reality however, couldn’t be farther from the truth. Shy, awkward and a mute, our sensitive hero Otus instead finds himself as the butt of everyone’s jokes and the everlasting recipient of scorn from his crotchety mentor, the hawkish Asio. Like all the best underdog stories however, Otus gets an opportunity to prove himself when a band of fearsome pirates come knocking on the door of his beloved village in search of some mysterious owl relics that collectively have the power to change the world (think the owl equivalent of Thanos’ Infinity Stones and you’re on the right track).

It’s during this attack that Otus realizes a couple of things. Firstly, by using the skills taught to him by Asio, he is able fly for infinite period of time wherever he likes but more than that, he can use his flying ability to help him pull chests, food and other items out the ground in true Super Mario Bros. 2 style. The second and more crucial epiphany Otus has is that he’s not alone. Flanked by his best mate Geddy, who happens to be just as socially inept as Otus is, the two best friends find themselves locked in a struggle against the pirate menace as they attempt to ensure the survival of the village that they call home.

Owlboy then, is ostensibly a platformer through and through, yet it remains one which liberally cribs from the pantheon of great genre entries such as Kid Icarus and, more obviously, the Tanooki Suit escapades of Super Mario Bros. 3. It’s here, in this criss-cross of genre influences that Owlboy brings a functional use to the friendship that Otus and Geddy have, as the former may carry the latter around the game world while Geddy can use his handy firearm to attack foes and destroy obstacles which might otherwise prevent the duo from continuing on. With the act of flying handled by the left analogue stick and aiming accommodated by the right, soaring about the place whilst blasting anything of note simply feels great and at no point does controlling Otus and Geddy feel anything less than super responsive.

Not content to merely rely on the dynamic between Otus and Geddy as the sole cornerstone of its design, Owlboy also allows Otus to pick up other friendly individuals too, the difference being that each person which Otus holds in his talons brings their own abilities to the table. Though Geddy’s pea-shooter esque gun is great for destroying unarmored enemies and smashing through wooden structures, it does little against hardier monsters or more robust materials such as stone or metal. It’s here that another character comes into play later on with the necessary firepower to destroy these obstacles, and by permitting the player access to areas that were previously inaccessible, Owlboy begins to take on a wonderful Metroidvania style aspect to its design.

Beyond all that flying about and shooting things, Owlboy’s tandem system also provides the backbone to a great deal of the game’s puzzles too as Otus can pick up and drop his friends in separate locations, allowing them to overcome pressure plate puzzles and other conundrums that require folks to be in multiple different locations at once. Additionally, Otus comes into possession of a special trinket early on in the game that allows him to teleport his friends to him instantly and this, as you might well expect, is used prominently in the solution to many of Owlboy’s puzzles.

Pointedly, the developers are also clever in how they subvert Otus’ ability to fly, as there are a number of sections where the ability to fly just isn’t available, or if it is, the skill must be employed in an unusual fashion in order for the player to progress. And this is the thing; the standard to which Owlboy blends vertical and horizontal shooting beats with traditional platforming mechanics really hasn’t been done to this level of sterling caliber before. Whether you’re conquering one of the game’s many impressive bosses, flying through a tunnel at high speed while being chased by an ancient mechanical monstrosity, or discovering one of the game’s many secret rooms, it’s an inarguable point that though Owlboy is a platformer at its core, it nonetheless stands all in a class of its own at the apex of the genre.

Beyond the compelling sum of its stellar platforming, shooting and adventure mechanics, there’s a real emotional gravitas to Owlboy’s narrative which is aided in no small part by the fact that it’s crammed with a raft of unforgettable characters all of whom have been written beautifully. Whether it’s the nervous but smart owl Solus, Otus’ bullying classmates Fib & Bonacci (I see you, D-Pad Studio, I see you) or the psychotically cheerful shopkeeper who employs/enslaves a band of borderline suicidal birds to do her bidding, the cast of characters in Owlboy are as entertainingly fleshed out as they are varied. Ultimately though, it’s Otus’ underdog story and how his reluctant ascent into heroism affects those around him, turning enemies into friends all the while confronting his destiny that serves as the true beating heart of Owlboy’s odyssey.

Naturally, any review of Owlboy would be incomplete without mention of its tremendous audiovisual presentation. Though pixel art is hardly a new visual style, here it has been employed with verve, evoking fond memories of late 16-bit and early 32-bit 2D platformers, Owlboy simply bleeds character and charm from every pixel and demonstrably shows that D-Pad Studio have an exceptional grasp of the art form to say the least. Easily matching the visuals is the soundtrack. An absolutely sublime medley of tracks composed by Jonathan Geer that feature live instruments throughout, whether its the somber beats of a tragic scene or the raucous and thunderous instrumentals that serve as the backdrop to an epic, pulse racing boss encounter, Owlboy’s aural offering always manages to complement the on-screen action perfectly.

Sitting at the very apex of the platforming genre, Owlboy is nothing less than a triumphant, soaring achievement and one that doesn’t just seek to emulate the classics of old but actually ends up being better than just about all of them. By defying gravity, the very thing that has defined the platforming genre in decades past, D-Pad Studio have in Owlboy created a true evolution that soars higher than its peers, and the result is a flight of fancy you really, really shouldn’t do without.

If you enjoyed this Owlboy review, why not unearth some other independently developed gems in our best PS4 indie games feature.

Owlboy is a breathtaking masterclass in platforming adventure. If you're even the slightest fan of platforming games, you owe it to yourself to add Owlboy to your collection.