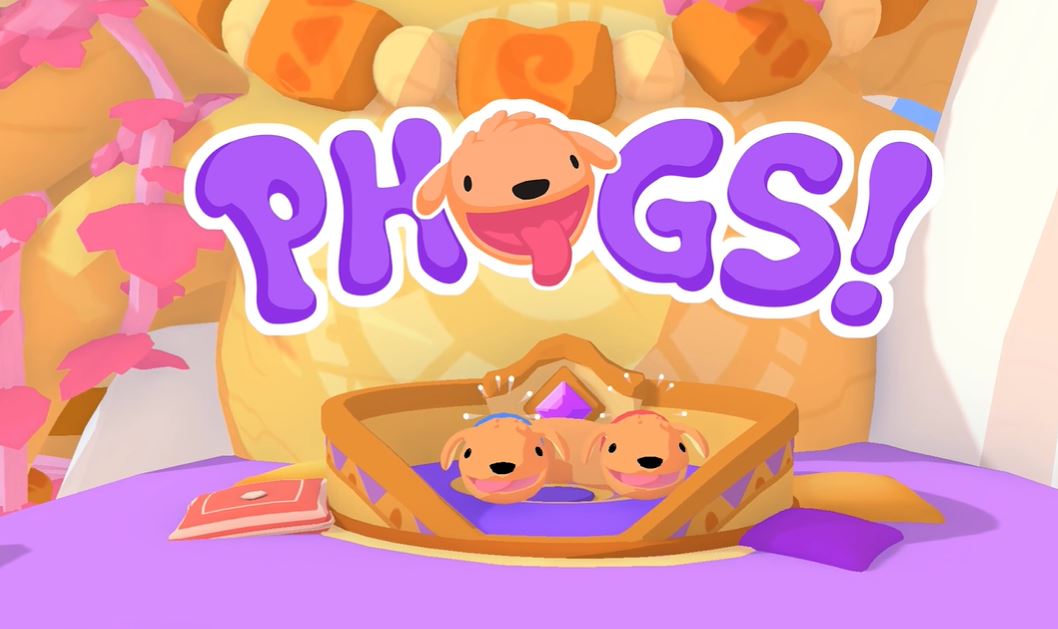 PHOGS! PS4 Review. As the at a glance text for PHOGS! proudly proclaims on the PlayStation Store, PHOGS! is indeed all about “double ended doggos” – as if that’s all you’d need to know in order to get interested in the game. For me, the occasionally not-so proud owner of three miniature dachshunds, I was pretty much immediately sold on this brief descriptor alone.

However, lurking beneath its furry, wet-nosed veneer is quite the innovative physics puzzler which not only tickles the old grey matter duly but is also eminently accessible to puzzle (and dog lovers) of all ages.

A Boundlessly Charming Physics Puzzler That Is Best Enjoyed Cooperatively

Look, I have no idea why the protagonist is a joined up, stretchy belly dog with a head on each end but what I can tell you is that with its twee worlds in which a bounty of pastel colors burst forth from the pixelated seams of just about everything in the environment, PHOGS! is one of the most charming little games I’ve had the pleasure to play in a good while.

With PHOGS! players have the choice of playing solo, locally with friends or online with other doggo lovers across the world. Transformative in regards to how it affects the control system, a single player essentially has each analogue stick corresponding to each end of the stretchy hound. This means that movement around the environment is coordinated with the analogue sticks, while other actions such as biting to grip onto objects is achieved with the shoulder buttons.

When played locally with a second player, two control options become available. Two players can share a single pad and a dog head each, or they can each have a controller to take control of the double ended doggo that way instead. Of the two, while sharing a single controller might seem fun, in practice, assigning a controller to each player works far better as it simply provides a greater degree of control over things rather than struggling for physical dominance over a single pad.

This also works better than simply playing online against other players too, not least because the barking, yapping core of PHOGS! appeal is the relatively intimate banter and laughter that often stems from failing at the game rather than succeeding at it.

Speaking of succeeding, the goal in PHOGS! is quite simple. Players control PHOGS! titular double ended doggos as they pant and bark their way through three distinctly colorful and charming areas based on the three pillars of doggo life – eat, play and sleep (is taking a crap in your trainers a hidden fourth world?). Anyway, it’s abundantly clear that PHOGS! has been crafted by the hands of dog lovers as all manner of charming touches are evident – from the panting of the dog heads to the gentle twinkle of their collars as they bounce and stretch around the environment PHOGS! is ASMR manna from heaven for hound fans everywhere.

Into the game proper, PHOGS! actually reveals itself to be a deceptively accomplished physics puzzler. By using the stretchy dimensions of PHOGS! double ended hound creature, players must bend, stretch and wrap their way around objects in order to progress through each level. Spicing things up are special objects and environmental aspects that are unique to each of PHOGS! three main themed areas, such as gusts of winds, mechanical trains and more besides.

In one of the sleep levels for example, when one end of the dog sausage (honestly, what else would you call it?) bites onto a lightbulb the light will shine out of the mouth of the dog on the other end, allowing the stretchy duo to banish shadow areas and provide solidity to light aspects in the environment such as bridges and so forth.

Though the puzzles in PHOGS! will likely pose little challenge for the older, more skilled folks, the gentle gradient along which the difficulty curve travels more than makes PHOGS! a suitable prospect for both the younger folk looking to take their first steps into PlayStation gaming and those of us that want our brains tickled rather than taxed.

That’s not to say however, that the numerous areas that are scattered across PHOGS! trio of hound themed worlds are bereft of depth because that simply isn’t the case. You see, replayability in PHOGS! is tied very much into the various bones and other collectibles that can be found in the nook and cranny alike of every level in the game.

Once collected these bones can be traded in at PHOGS! hub world for a variety of different costumes for each doggo head. If you want to have one doggo head with cat ears and another with a Sherlock Holmes style cap you can! Though arguably the appeal of such incentives are weighted more strongly towards younger players than the other end of the spectrum.

And then we come to arguably PHOGS! most compelling and defining quality – other people. Much like taking our four legged friends for a trot in real life, PHOGS! is arguably much better and more enjoyable with a local friend, not least because it depends on a level of teamworking and coordination that is entirely missing from the single player version of the game. Rewarding and naturally funny on account of all the mistakes you’ll make, PHOGS! is the sort ultra cute, super relaxing puzzler that really all of us has needed for some time but just never realized.

PHOGS! cleverness extends to other aspects of its offering too. When it comes to accessibility, there’s not a single line of explanatory text in PHOG! Instead, everything is communicated through images and other such visual cues, something which bolsters the appeal of Bit Loom’s puzzler even further still.

Where PHOGS! finds itself lacking though, is in terms of the size and sophistication of its overall offering. PHOGS! can be completed between 4-7 hours and even when the additional collectibles are taken into account, it’s certain feels more akin to a morsel rather than a banquet. And again, the puzzles are such that they won’t pose any sort of serious challenge for fore tenured players – and such folks can expect to breeze through PHOGS! overall offering in a single sitting. It must also be said that PHOGS! is much more enjoyable when played with friends, so if you’re intending to play solo, feel free to take a point off the review score below.

For everyone else though, PHOGS! is an effortlessly charming physics puzzler offering with a great difficulty curve and an audiovisual sensibility that makes it dramatically suited to the both the young and young heart. It’s also a wonderfully charming game about a double ended dog bouncing its way through a trio of whimsical themed worlds and I mean really, what’s not to like about that, eh?

With its weaponized cuteness and deceptively deep physics platforming shenanigans, PHOGS! succeeds grandly as a hugely entertaining effort which truly shines when played with a local friend. PHOGS! is absolutely one physics puzzler that you should take for walkies.