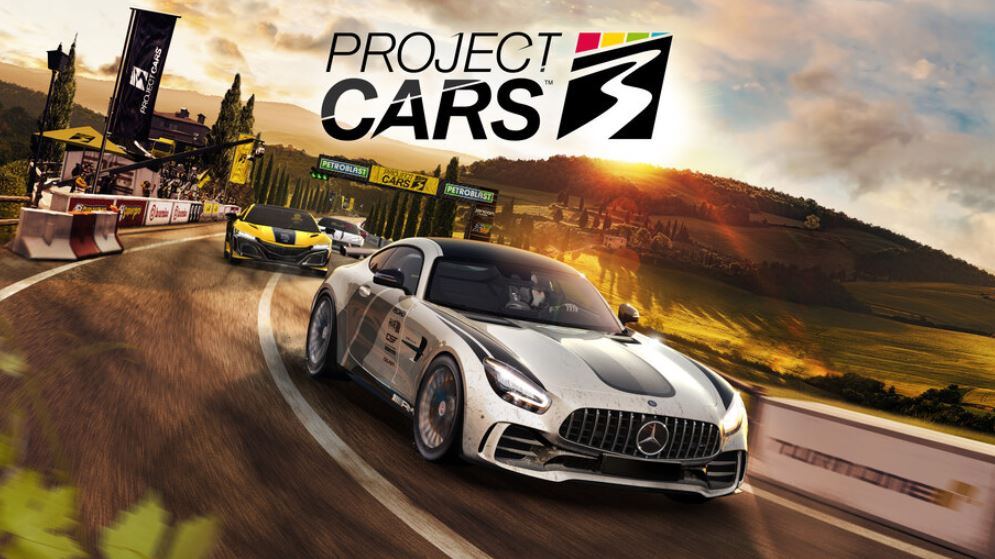 Project Cars 3 PS4 Review – Project Cars first appeared on PC and consoles back in 2015. It was a technically impressive racing sim lacking in accessibility, but with an admirable dedication to accuracy and an impressive selection of cars and circuits. Project Cars 2 in 2017 added even more content, improved the front end navigation and visuals, and was finally playable on a controller without excessive tweaking. As an alternative to the sterile Gran Turismo Sport and the arcade thrills of DriveClub, it was an ideal toybox sim for driving fans.

Fast forward to 2020 and Project Cars 3 pops up with almost zero fanfare, with developer Slightly Mad Studios now owned by Codemasters. Somewhere along the line, it was decided that the toybox sim with the functional but unappealing menus would be much improved by snazzy arcade-style presentation, Gran Turismo style credits for car upgrades, and simplified handling more akin to DriveClub. But have they binned the appeal of the original games for a more mass-market appeal?

A Shift In The Franchise

Racing games which encompass a broad range of car classes and racing disciplines are few and far between, with Gran Turismo, Forza Motorsport and Project Cars in roughly the same ballpark in terms of car and track selection and career paths. Of the three, Project Cars was probably considered the most hardcore and demanding, aimed at racing enthusiasts who enjoy the minutiae of car set ups as much as the actual driving. That said, the first two Project Cars games were no less rewarding than their huge budget cousins, and the car and track selections were staggering in their breadth, along with the user modifications on offer.

Initially, then, it’s quite disconcerting to boot up Project Cars 3 and be presented with a dumbed-down career menu, with its focus on levelling up XP and earning credits to modify your vehicles with racing parts, levelling up to higher car classes the more you spend as per Gran Turismo. Credits also allow you to buy new vehicles to expand your garage and subsequently take part in class-specific races.
Out on the track, XP is awarded for drafting, perfecting a corner, and for clean overtakes – so far, so DriveClub.

Also from DriveClub, achieving the three specific aims on each of the races or time trials for each car class helps towards unlocking the next tier, for instance, 8 overtakes in an allotted time, getting on the podium, or perfecting over 50% of the corners on the circuit.

While all this point scoring and backslapping is fine for an arcade racer, it seems incongruous with a racing series which has previously focussed on fine-tuning your car to each track and then learning and nailing a circuit with realistic handling which simulated each racing discipline.

The option to tune your car is thankfully still there, but the handling model appears to have been slightly simplified, with a much narrower difference between how the cars behave on track, even with all the assists turned off. While this sounds like a negative, it makes the game far more accessible for beginners, particularly on a controller which is now a perfectly good alternative to a wheel favoured by Project Cars 1 & 2.

So, with all that in mind, let’s forget about the Project Cars series and we’ll henceforth refer to this new release as ForzaClub Turismo. It’s actually very enjoyable taken as a mashup of its donor games. As well as amassing a garage full of beautifully rendered race, sports and classic cars, each one can then be decorated in a vast array of designs, colours and decals. The circuits are as impressive as ever with dynamic weather and a day/night cycle making each race win a constantly changing challenge.

Working through the single-player career is satisfying and varied, with plenty of Invitational races to dip into, alongside the series-specific championships. Upgrading the most basic E series car with racing parts means that you can hang onto your Honda Civic as you progress into higher leagues, fitting the necessary parts in order to compete against more expensive and higher-powered vehicles in the classes above.

Purchasing new cars is one of the joys which you don’t want to miss though, so handpicking your favourite (or most affordable) cars as you progress means you have a personalised garage of spoils which represent your victories on the way up the ladder.

Where Are The Karts And Milk Floats?

Away from the extensive Career mode, the Single Race option is a good testing ground for a car you might want to purchase, as any of the 211 cars can be tried out “on loan” on any of the 49 locations (with extra track variants), meaning a vast amount of content to play with. More or less any car class you can think of is covered here, aside from karts and milk floats, with a generous smattering of classic and vintage rally and racing cars amongst the modern sports and supercars. Likewise, there is a massive variety of venues to race on, including real-life race circuits, city tracks, rally stages and a smattering of beautifully realised open road circuits.

Online, Rivals is a new leaderboard mode (borrowed from Forza) which encourages players to post their fastest laps on the three daily car/circuit combos available and online multiplayer racing has the usual options available along with the new scheduled races for which you qualify and join at a specific time. Clean driving is monitored and improves your racing licence, so dirty driving is positively discouraged which is a boon for anyone who has had to endure being rear-ended constantly by other players in the past.

Graphically, the cars are mightily impressive although the damage modelling seems to have taken a giant step back from Project Cars 2 which represented a far more realistic approach to crumpling after a collision; whilst what we have here is entirely superficial. Without the option of taking a pit stop to repair damage any more, there are no longer any repercussions for hitting a wall at 200mph other than a missing bonnet or heavy scratches.

The tracks are a mixed bag from a visual perspective, with 60 frames per second taking precedent over trackside detail, but the lighting and weather effects are so good, it rarely seems to matter at high speed. Only when you start taking a magnifying glass to trees or buildings in photo mode does it become obvious that the high frame rate was the priority for Slightly Mad Studios. With the potential for up to 32 cars on track at once, the frame rate is pretty consistent, but with the maximum field of cars, there are occasional drops in smoothness on the base PS4 at least.

As a standalone new franchise, this game would be a fresh alternative to Gran Turismo or Forza Motorsport which covers a vast array of racing disciplines and, more often than not, does it extremely well. But there’s a nagging doubt that an opportunity has been missed to further develop a brilliant sim series with the backing of Codemasters.

As you play further into the career mode, the relentless XP counters turning over and score indicators as you race soon start to grate. The arcade tropes coupled with the removal of tyre wear, pit stops and realistic car damage from Project Cars 2 leaves one with a rather hollow feeling and a sense that whoever took over production of the series has missed the point. Nicking ideas from the cream of the successful multi-tier racing titles must have seemed like a good idea at the board meeting, particularly if it would potentially break the series into the mainstream. The trouble is, although it looks, sounds and plays well as an arcade-sim with the same plethora of content as its predecessors, the series’ USP and “soul” has disappeared in the process.

A Change In The Franchise

So for an arcade racing fan who doesn’t own any of the donor games to Project Cars 3 library of ideas, it’s actually worth grabbing for the exhaustive and enjoyable career mode and the potential for hugely varied online battles drawing from so many cars and circuits.

For those who like to take their racing games a little bit more seriously, get a copy of Project Cars 2. It’s certainly not as slick, but the key elements which made it stand out as a brilliant sim are still present and correct before the production team decide that dumbing down would bring more customers on board, even if it alienated the core audience who rated the series so highly. Perhaps that’s why no-one at Bandai Namco could be bothered to promote this game before it was quietly released.

If you're looking for an arcade-sim with buckets of content which combines all the best bits from Gran Turismo, Forza and DriveClub, look no further. If you're a Project Cars 2 fan hoping for an update to their favourite sim, forget it. Key sim elements are now missing and although it's a fine arcade-sim racer, it should have been rebranded rather than gutted for a mainstream audience.