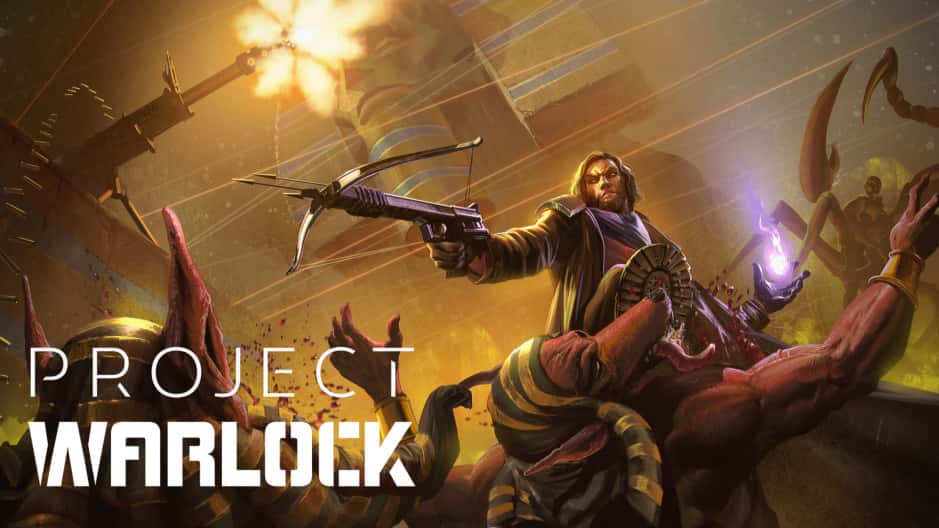 Project Warlock PS4 Review – Project Warlock is, undoubtedly, a whole heap of fun – especially if you’re an aging crusty like me that remembers some of the shooters of yesteryear such as Hexen and Blood. Even if you weren’t around during that time, Project Warlock is still certainly well worth a crack anyway, not least because it combines a decidedly sharp retro presentation with fast and furious shooter and progression beats in a surprising way that many contemporary retro shooters just don’t manage to do.

Akin to any decent shooter worth its salt, Project Warlock is super easy to understand and get into. You are the titular Warlock who must, across 60 different levels, lay waste to all manner of demonic fiends as you collect loot, get new weapons and upgrade your abilities and spells as you murder your way to the big bad devil himself in the depths of hell. Oh yes – spells! You see you wouldn’t be much of a warlock if you couldn’t throw out a spell or two to spice things up a bit and in this Project Warlock doesn’t disappoint.

Whether it’s a simple illumination spell to brighten things up in order to reveal hidden treasures or baddies or a rip-roaring wall of flame that turns anything to ash that’s unfortunate enough to end up in its path, the spells that you can wield in Project Warlock all add an extra dimension to your arsenal but in doing so, all require a hefty supply of mana to keep the magic wheels turning, as it were. My only (minor) complaint is that I would have liked to have seen more than eight of them in total, but I digress.

Luckily mana, health, ammo and all the other supplies that you need to keep your ass-kicking shenanigans going are generously spread through each map, so if you’re worried about running out of ways to murder the evil folk don’t be. Speaking of which, even if you do run dry on ammo and spells, Project Warlock has an unusually strong focus on powerful melee weapons, such as an especially lethal handaxe that when swung creates a massive arc in front of the player which causes huge damage to any foes caught on the business end of it.

In terms of ranged combat, Project Warlock turns out to be a bit more uneven in this regard. Sure, the various staples of the FPS genre such as pistols, shotguns and more all make an appearance, but the presence of wands and lightning bolt shooting staves all feel far less satisfying to wield by comparison.

When we come to the selection of bad dudes that Project Warlock has you laying waste to, the game fares much better; offering up a veritable murderer’s row of more than 70 enemies that each have their own attack patterns, strengths and weaknesses for you to deal with – ranging from fiendish succubi to towering, screen-filling giant robots. Weapons and monsters aside, developer Buckshot Software has also done a grand job in recapturing the fast and frenetic movement of the first-person shooters of yesteryear too.

It’s something of a relief to discover that Project Warlock boasts that same, slightly floaty but super quick player movement that is synonymous with titles such as DOOM and Duke Nukem 3D, making both movement and combat feel every bit as responsive and satisfying as they should be. Equally, Project Warlock also embraces the non-linear, key-seeking structure of those earlier games too, forcing players to obtain a selection of color-coded keys in order to reach previously inaccessible areas which while hardly groundbreaking, helps to provide an additional incentive for player agency all the same.

Beyond such traditional design decisions, Project Warlock also stuffs a great number of traps into its 60 odd levels. Whether you’re pulled down into a pit unexpectedly and surrounded by hungering demons, find yourself trapped by zombies rising out of the ground from behind as you enter a seemingly deserted treasure room, or have to deal with the door at the end of the level spitting fireballs at you, Project Warlock seemingly has no shortage of traps to keep you on your toes.

Arguably the biggest way in which Project Warlock separates itself from its genre stablemates though, is in the progression systems that it provides the player. Rather than just providing new weapons for the player to collect, there’s a whole heap of shiny treasure laying around each level which when collected provide experience points, while killing enemies also brings you similar amounts of that experience point goodness.

More than just window dressing, these experience points can be invested at the various upgrade stations that you’ll enter between levels, allowing you to collect new spells, buff your damage, gain extra health, increase your chances of discovering better treasure and much more besides. As such, this sort of progression dynamic makes Project Warlock feel a fair chunk more rewarding than its more dunderheaded contemporaries.

Though some of the ranged weapons don’t have the oomph that one would might expect, with its sharp retro presentation, satisfying combat and rewarding progression, Project Warlock is definitely something of a pleasant surprise and one that makes a refreshing change from the recent trendy glut of retro-inspired blasters.

Project Warlock is out now on PlayStation 4.

A sharp retro shooter with a compelling progression system and satisfying fast-paced combat, Project Warlock is an easy recommendation for anyone looking for an easily accessible blaster which does more than just seek to emulate its classical inspirations.