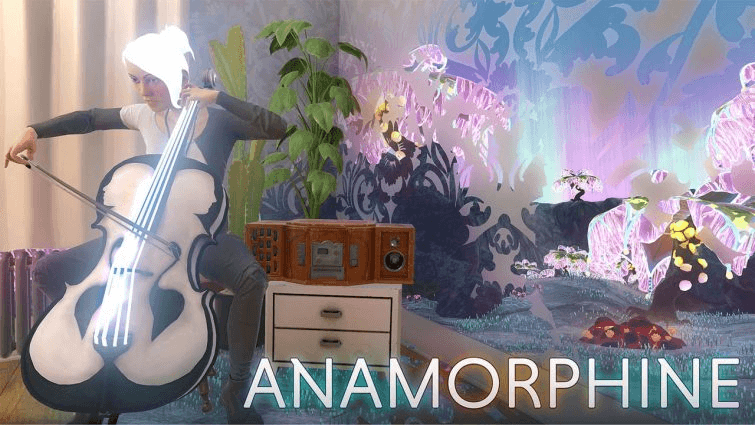 Perspective is the heart of Anamorphine

You are Tyler, a photographer, moving into your new apartment with cellist and partner, Elena. Very little is said throughout the game. In fact, one phone call offers the only lines of dialogue. Scenes abruptly jump back and forth, often shifting from a picture on the wall, through a new door into a new area, or even a spontaneous deformation of the space soon reforming into another. A lot of it happens at random as well. The effect that comes from all of this is this sense of memory and how the mind doesn’t keep track of things in a linear sense. Thoughts fold into others and invoke others from different times. In general, Anamophine keeps a linear delivery, though. At the same time, you begin to lose a sense of time as events build onto each other and circumstances build.

Elena herself is the focus. She spends a great deal of the game’s beginning playing her cello, either with her students or with her professional quartet. In the first hour or so, an accident befalls her, but I won’t detail too much here. If you’re interested, I’ve expanded on more of this, including a conversation on themes and intentions in a reflection piece.

Her hair is how her perspective is conveyed. Her hair behaves, for the lack of a more sensitive comparison, like a mood ring, displaying warm, bright colors when she is upbeat and changing to dark, cool colors when she sinks. After the accident, she begins to fluctuate as she tries to recover.

Anamorphine is a perspective change for me. You are Tyler, trying to help Elena keep afloat as she fights for her old life back. In her struggles, she begins to shut you out, and you have to find a way to bring her back. These are represented through metaphorical scenes where you find massive flowers and help them sprout again. At the end, you find Elena falling, but you never reach her, instead falling into the abyss she was suspended over. Different scenes like this convey your attempts to help. They give a stellar sense of the reality that comes with this territory: long efforts for just a little progress repeated over and over because the goal is worth the time. At the same time, as a game, many of these scenes become a problem. Anamorphine relies on directional audio to guide you through the game. The audio aspects are great, including the soundtrack in that generalization. It’s in visual transitions that problems arise. Between memories is a long load screen. Between transitions is a dip in visual quality. In the metaphorical scenes detailed earlier, frame rates are noticeably reduced and getting around is a bit of a guessing game.

There’s metaphorical value in these kinds of things, emulating that endearing perspective that comes with the inevitable struggle from helping people. At the same time, this game is completely visual. You only use the joysticks in Anamorphine. A lot is being said in this visual experience, and these frequent breaks in immersion force a need to get reinvested, sometimes a little and sometimes completely. Load screens often lasted minutes, even on a Pro. A great deal can be overlooked, and a lot of those issues will probably be forgotten after the game is over. However, the experience, what’s being conveyed and how, deserves better. This game covers too important of a topic to be reduced to technical issues. At the same time, those issues are too big to be ignored. They’re not game-breaking, but they’re common and they’re timely. The experience that Anamorphine delivers deserves better.

Anamorphine portrays a hard topic with grace and accuracy

Struggles aside, no matter how common, Anamorphine is a must-play for anyone in search of perspective. It’s not visually demanding, but the visuals are metaphorically beautiful and tragic. Anamorphine is an ambitious, realized vision, despite its issues. If you have even a remote interest in what this game has to offer, you will never forget it.

Anamorphine has a lot of technical and performance problems, but the outlying narrative finds its way through, delivering a poignant, deep exploration into loss and depression. The game's performance issues can't be ignored, but Elena's story will stick with you for a long, long time.

Everybody’s Gone To The Rapture