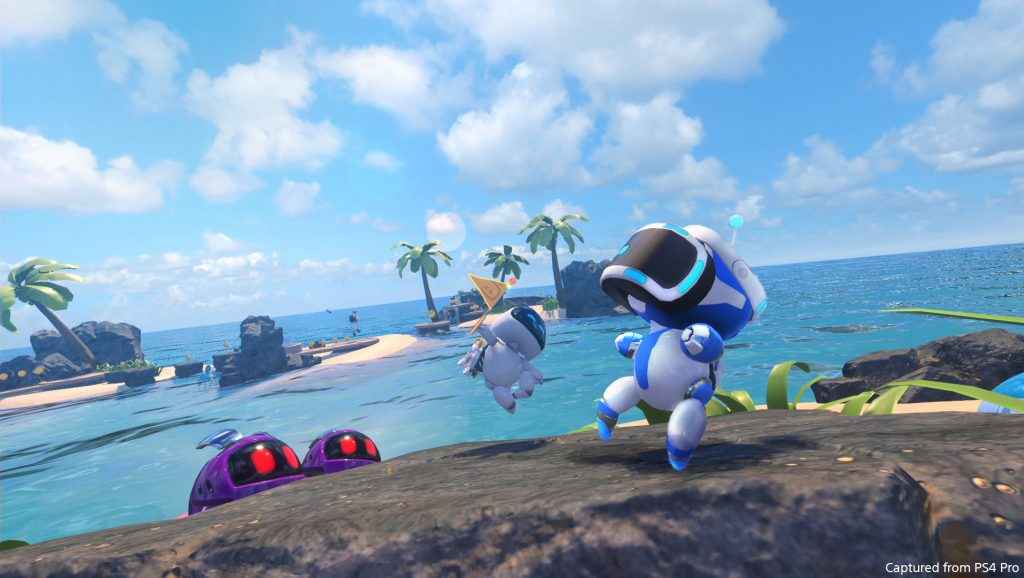 Astro Bot: Rescue Mission starts off with the Astro Bot’s ship being attacked and disassembled in space by a slimy alien. Your fellow Bots are also cast out onto different worlds along with pieces of conyour ship. Astro is the hero of the title and must head out to rescue his fellow comrades and repair your ship.

Astro Bot Is An Outstanding Hero

On his quest, Astro travels to five different worlds and takes on twenty missions with over twenty unique challenges to rescue his comrades.

One of the great things about the use of VR in Astro Bot is it essentially works as your camera as you control small little toys through a massive world. The enemies and Astro in particular are just small adorable little toys.

As with any VR title a lot of room is required to play Rescue Mission. Looking around behind you and and around corners without hitting anything in your room is something you’ll have to watch out for. What I love about the use of VR in this title is the fact that it forces you to be involved with the VR headset.

Looking around corners to find secrets and using you’re actual head to knock over pillars and barricades in your way is a unique use of the headset which I haven’t really seen a lot of VR games utilizing. Enemies will even attack you by spitting goo on your screen to make it harder to see, forcing you to shake your head to get it off. One enemy in particular will have you play soccer with it by heading the soccer ball at it trying to wear it out.

Another great use of VR is your actual controller. The DualShock 4 plays in important role in completing a lot of tasks and getting through a lot of the missions. Bots you rescue fly into the touchpad as it opens up, and you can shoot out ninja-throwing stars by swiping the touchpad. There’s a lot of cool effects!

Outside of that, you unlock abilities for your controller to help get through missions. There are various pieces of equipment that you unlock, from water cannons to put out fires and grow plants to grappling hooks that allow you walk across the rope to reach various locations.

These tools are fun to use as they can be used as weapons against enemies. Unfortunately, you can only use these tools in specific missions and can’t really carry them over from mission to mission.

The Devil is in the details. Everything caches your eye

Bot’s can be hidden in the everywhere: hanging off of branches, behind hidden destructible walls, even hidden locations under your feet. I had a blast looking for all the bot’s in the game as a lot of them presented a nice challenge to locate.. There are over 200 bot’s to find, eight in each mission. There is also a hidden Chameleon to find in each mission. These Chameleon’s blend into the background kind of like stealth camo from Metal Gear Solid and The Predator.

This also leads to one of the negatives that I had with the title. Rescue Mission is just too easy. It’s not a bad thing considering the audience but there really isn’t any consequence to failing. Even though you can fall off platforms you simply just respawn at the nearest checkpoint. This also goes for you yourself.

Everytime I got attacked the screen would crack but then repair itself after a few seconds. There just really isn’t any challenge outside of finding the bot’s and the Chameleons.

Go big or go home. Everything is massive to little Astro Bot

The other big part of Rescue Mission is returning to your ship. Your ship is a small little fun box. You’re rescued comrades will be waiting for you on the ship and you can go around and just have fun in the ship. There are slides and trampolines to play in but the big thing is the small little crane arcade game you can play.

The crane arcade game plays just like the ones in real life do. Using the coins you collect throughout the game, you begin by moving a claw around the claw in this case is a small little bot. You use the bot to pick up spheres that feature awesome 3D models of environments from each of the different worlds.

These models feature unique sequences of enemies doing fun stuff. It’s one of the those things like you would in one of those quarter machines in a grocery store.

There are over a hundred of these models to get with each one being color coded based on each of the five worlds. Once you collect the entire set you can change the interior of the ship to represent the worlds. It turns it in a giant playground to run around in and explore based on the games five worlds.

To say that Astro Bot: Rescue mission is a good game would be an understatement. It’s a great game and easily the best PSVR game to date. It’s also the best platformer of the year. If there is one game that can compete against the Mario juggernaut, Astro Bot: Rescue Mission is that game.

Astro Bot: Rescue Mission looks incredible in VR. When I said this was one of the best VR game’s I’ve played I wasn’t exaggerating.