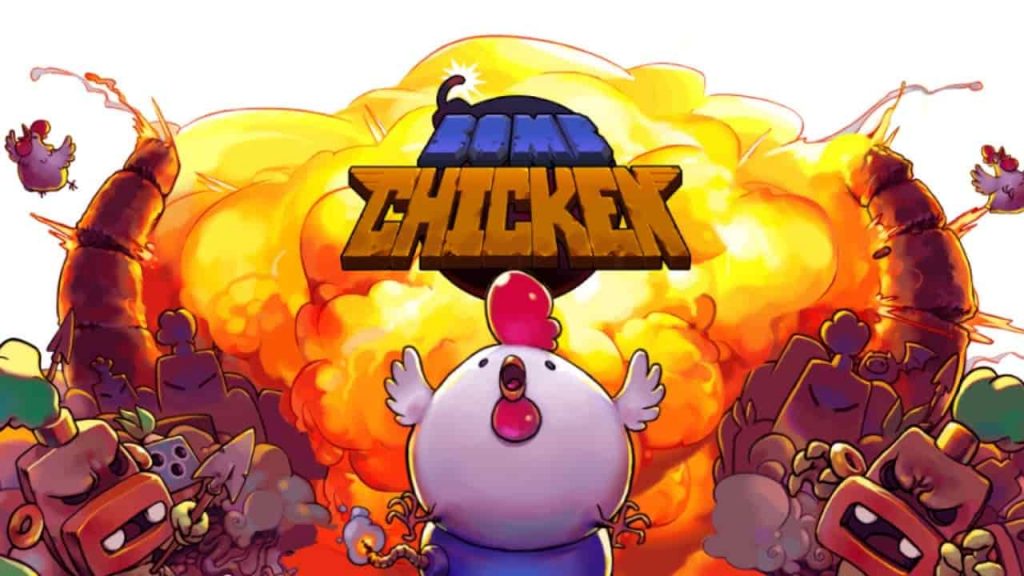 Nope, Bomb Chicken isn’t some kind of hellaciously exotic, colon-busting spicy chicken dish; it is instead a well-designed and charming game with a neat design principle at its core – this is a platformer in which you cannot jump.

Bomb Chicken is a traditional platformer with an explosive difference

A 2D platformer with an adorable, colour-drenched pixel-art aesthetic, Bomb Chicken has players take control of a genetically mutated (and rather fat) chicken, who instead of laying eggs, lays catastrophically devastating bombs instead in order to escape his fate of being the central attraction in a BFC Variety Bucket. The goal however, is that most quintessential of platforming objectives – you begin on a level and must ‘simply’ make your way to the exit. So far, so retro then.

The difference as one might expect, lay in the fact that because our feathered hero cannot jump, he must instead rely on bombs to do everything for him and it’s this mechanic that becomes both a boon and a constant peril to your progress through the game. Though our chicken can glide semi-gracefully from platforms, that is quite literally (other than moving left or right) the only thing he can do which doesn’t require some sort of screen-shaking explosion.

Capable of laying an infinite amount of bombs, players can fashion veritable bomb towers that stretch to the top of the screen and allow you to reach platforms, glide down to ones below, destroy walls, blow up enemies, trigger switches and much more besides. In true Super Bomberman style, Bomb Chicken also allows players to kick bombs across the screen too in order to reach far flung foes, switches and other points of interest.

Speaking of points of interest, the blue gems which litter each level can be collected and traded in at the end of each level for extra lives – assuming you have the requisite number of the things to do so. More than just collectibles that you’ll casually nab on your way through a level, these gems can often be found in perilous positions, often requiring you to go out your way to collect them and potentially, suffer a death or two (or more), in the process. Elsewhere, gem-stuffed chests can be discovered in secret challenge rooms that lurk behind fragile walls – further exacerbating the risk/reward dynamic that Bomb Chicken so expertly employs throughout.

Where Bomb Chicken really excels though, is in how it evolves its platforming puzzles throughout the game to take advantage of the bomb mechanic in new and interesting ways that feel fresh and challenging. For example, a particular conundrum early on has you kicking bombs into a pinball style apparatus which bounce the circular explosives around a set route – the goal being to have the bomb explode just as it reaches a section of stone, thereby allowing you to proceed.

The problem however, is that if you kick the bomb right away, it’ll overshoot the desired target and blow up after the fact, requiring you to lay the bomb, wait for a bit, and then kick it into the apparatus. As such, this is where another layer of Bomb Chicken’s deceptively deep offering reveals itself – much of what makes the bomb mechanic work so well is that developer Nitrome continually forces the player to weigh up their own fate versus the objective that they want to reach with their bombs, and it’s this conceit that Bomb Chicken does so well in developing.

Later on in the game, as the difficulty ramps up in line with your own confidence in your newfound poultry powers, turrets, lava, ghosts and more such perils are introduced in piecemeal fashion, always testing your knowledge of new tricks that you’ve learned in the process. As a result, Bomb Chicken never lets up and always feels like it’s providing some sort of fresh challenge or obstacle to be overcome.

Though Bomb Chicken skilfully distills the essence of the traditional platformer and replaces its central mechanic with something unexpected and continues to build and evolve that concept throughout, it remains an ultimately forgiving effort that just about anybody can play.

Take how Bomb Chicken deals with dying, for instance. When you die though you are restarted at the beginning of that particular level – all the gems that you collected (and spent lives collecting) the first time now don’t need to be collected again, making subsequent attempts at a level a little easier given that the temptation of having to risk a life to get these gems is reduced.

Another pair of feathers (pun intended) in Bomb Chicken’s cap are not only just how responsive and effortlessly simple it is to control its titular, bomb-crapping protagonist – you literally can only move left to right and drop bombs, but each level is of bite-sized proportions as well, allowing you to complete a small handful without having to invest a massive amount of time.

Though awash with retro aesthetic flourishes, (even just the idle animations are animated with generous flair) and boasting no shortage of effervescent charm, Bomb Chicken’s arguably biggest transgression is that its central mechanic remains the focal point of its entire duration. Though perhaps obvious, this means that you’ll not collect any other power-ups, gear equipment or anything of that sort that expands the core concept beyond that which the game throws at you in terms of level design and enemy types.

Then there is the size of the game, too. Spanning between roughly four and six hours for single playthrough and with no other game modes to speak of and little to make you return other than gem hunting and trophy scoring, Bomb Chicken doesn’t offer a necessarily strong enough incentive for you to dive back in once you’ve seen the credits roll for the first time.

Despite such shortcomings though, Bomb Chicken nonetheless makes a remarkable case for itself as an inventive, often surprisingly clever platformer that oozes character out of every digital pore, even if it is more a sensibly sized Chicken Variety Meal, rather than a banquet proportioned Family Variety Bucket when it comes to the width and breadth of its offering.

Bomb Chicken is out now on PS4.

Though a touch short and overly streamlined in its vision, Bomb Chicken nonetheless offers up a tremendously entertaining, highly digestible and resolutely clever platformer that everyone will be able to enjoy.