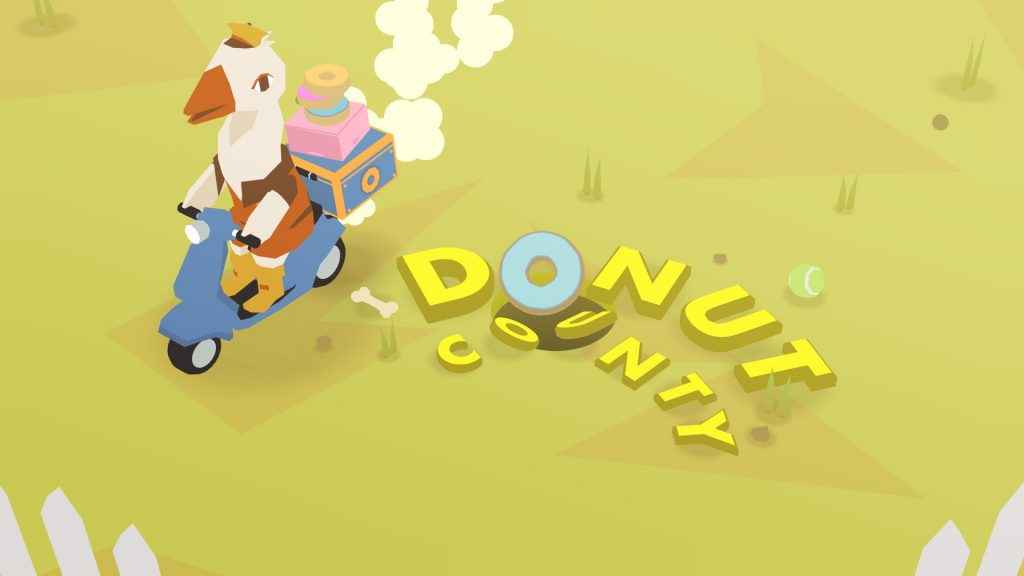 In Donut County you play as a hole in the ground. The goal, somewhat brilliantly, is to move the hole around the place and swallow everything on the screen before moving onto the next – the kicker being that your hole starts small and then gets a little bit bigger with each item, piece of scenery or living thing that you put away.

Think of a reverse Katamari Damacy where instead of a sprawling mass of objects that gets bigger and makes the screen busier, you are instead to trying to remove as much stuff off the screen as you possibly can. Donut County then is nothing if not eccentric, though quite happily I can also report that it is also highly enjoyable and warmly humorous to boot, too.

Donut County Is Simple, Funny And A Great Way To Spend A Few Hours

As a mysterious hole in the colorful, saccharine steeped Donut County, the objective for completing each level is the same – everything must be swallowed, however doing so is slightly trickier than you might initially think. Driven by a set of rigid physics, objects cannot be swallowed until the hole is large enough to accommodate them, additionally certain items might be proportioned oddly making the act awkward – a long plank of wood for example might need to be slowly levered into the hole and so must be approached differently.

There are some light puzzle solving elements – an early conundrum has the hole swallowing a furnace that causes hot air to fire upward, in turn enabling a hot air balloon to break from its restraints and sail into the sky. Another has the hole filling with water which must then be drained by a large friendly bird lurking around in the environment, thus making our friendly chasm free to devour the flapping fish that lay within. Hardly difficult stuff I think you’ll agree, but highly satisfying all the same.

Equally, while such puzzles are simple, whimsical and frequently smile-inducing affairs, so too can the hole be used for more free-form destructive purposes too – allowing players to launch objects into their fellows in order to destroy the area in quick fashion should the urge arise. Beneath its simplistic, casual puzzle beats and ultra-relaxed gameplay however lurks a well-written personable story, and one that is stuffed with contemporary cultural vernacular and entertaining gags throughout.

Essentially the setup is this – raccoons (those villainous raccoons! *shakes fist*) have taken over Donut County with controllable trash-stealing holes except that one of these holes has accidentally swallowed up BK, the player controlled raccoon who is largely responsible for all of the chaos in the first place. Finding himself deep underground alongside the very same townsfolk he consigned there, BK endures a lengthy, and often hilarious questioning as to why and how all this happened with the story advancing as you conquer each area.

Generously sprinkled with ample humor throughout, the narrative of Donut County is easy to like and equally easy to engage with. Such great writing extends further than just the story itself too as players will be greeted with a handy ‘trashpedia’ at the end of every level, which in turn provides chuckle-worthy descriptions of literally everything that was swallowed previouslyt. In short, expect to have your laughter muscles worked out frequently and often while you play Donut County.

Developed by Ben Esposito, whose previous design credits can be seen in The Unfinished Swan and the wholly sublime What Remains of Edith Finch, Donut County is a roundly holesome (sorry), well-written, easy to play and surprisingly satisfying affair that lingers fondly in memory long after the credits have finished their roll. Highly memorable and refreshingly light, Donut County is a tale of mischievous raccoons, warmly sweet humor and resolutely chill physics puzzle gameplay that everyone should consider.

Developed by Ben Esposito, Donut County is out now on PS4, PC and iOS.

If you enjoyed this Donut County review, why not take a look at our feature which covers the best PS4 indie games.

Though short in duration and hardly taxing, Donut County wins you over with buckets of charm and some of the most relaxed gameplay money can buy. As such, Donut County is a compelling, nigh essential stop on the gaming journey for any self-respecting PS4 owner.