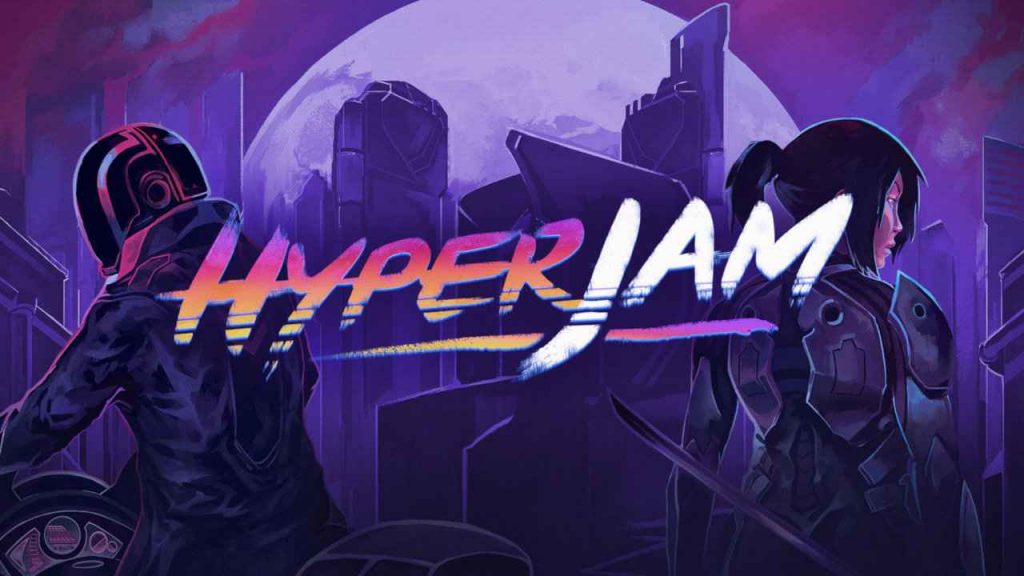 At first glance, Hyper Jam is all vibrant neon and pumping electronic melodies. But, underneath that striking and potentially gaudy-to-some aesthetic is a fun and enjoyable party game that offers satisfying fights and nail-bitingly close matches. But, even during those jovial moments, I couldn’t shake the feeling that the game wouldn’t hold my attention for an extended period of time.

Simple To Understand, Hard To Master

The first thing to about Hyper Jam is that it is an arcade party game at its core. The game offers free for all, top-down brawls for up to four players. You rack up points by damaging enemies with a variety of weapons, from high-powered rocket launchers to sharp and deadly swords, surviving as many rounds until you reach the point cap. At that point, you have to survive one more round to be crowned the victor. That concept is incredibly easy to understand thanks to the game’s great tutorial, which naturally allows you to test out the game’s various mechanics in real-time, rather than simply telling you.

Those mechanics are a lot more nuanced than you may expect. Not only do you have the ability to attack, but you can also parry attacks, reflecting rockets and grenades back at the enemy who shot them at you. A speedy and effective dash allows you to dodge attacks and surprise your enemy with close range attacks. On top of that, the game has a fair selection of weapons that add a nice bit of variety to those brawls. Outside of rocket and grenade launchers, there is a bow that requires precision, as well as a hard-hitting hammer and a speedy sword which can be thrown. And, you can even use your fists if you so choose.

Finally, after each round, you get the choice to pick a perk that boosts your strength in the brawl. These range from passive buffs, such as increased health and damage to active bonuses, such as freezing enemies every few seconds. You can then stack them if you choose the same perk again, boosting their effectiveness. These perks can drastically change how subsequent rounds play out, possibly giving you a huge advantage. Being able to attack faster, freeze enemies, confuse them and move faster and survive fatal attacks all at once can easily change the flow of a match, adding a welcome element of unpredictability that kept matches fresh and exciting.

Making use of all these mechanics to increase your survivability and looking around the game’s six stages for these weapons, as well as health packs, will allow you to breeze through rounds, pulling off insane plays and kills. For example, one of my favourite kills involved both of us being at low health and me throwing my hammer at the enemy only for him to be knocked back and falling off the tower we were fighting on, with me narrowly dodging his grenade’s explosion. During my time playing, as I slowly started to master all of these mechanics I began to have some thrilling fights with friends and against the AI, which will undoubtedly add a dose of competition during parties.

Where Style and Progression Blend Together

As mentioned at the start of this review, the game’s style is striking, to say the least. Guitar riffs and electronic melodies are as prevalent as the neon pink and purple visuals. Hyper Jam places you in the city of San Junipero from Black Mirror and never lets you leave. That vibe is constantly present and the game embraces that it, incorporating it into the characters and world. The game offers four characters, who are pallet swaps and don’t have any unique gameplay abilities. They all channel classic archetypes from the 80’s era, such as the suave, well-dressed male and the faceless and mysterious shadowy figure.

That style transfers to the progression system of the game. When playing you gain XP, which will level you up. Once reaching a new level you will receive a taunt, which is usually a cheesy quote, or a new stylish skin for one of the four characters. And whilst the skins look cool, the progression system ends up being pretty shallow, not exactly encouraging me to keep playing for a long period of time.

That is really the core flaw of Hyper Jam, it is fun in short bursts but nothing about it encourages me to keep playing. For a multiplayer game that could become a huge problem in the future as the game loses its player base.

Hyper Jam offers both online multiplayer and local couch co-op which works very well. Local co-op is easy to set up and doesn’t even require you to sign into another PSN account, which will save a lot of hassle when friends come over. Online multiplayer also works well, with no lag or server disconnects. However, at the moment, on launch day, there doesn’t seem to be a large player base which can leave you matchmaking for longer than ten minutes. Therefore, I wouldn’t place all your hopes on being able to play Hyper Jam online forever, especially with no cross-play available.

Hyper Jam is a solid arcade party game that I will pull out whenever I have friends over. It’s surprisingly deep gameplay that is satisfying to learn and master allows for competition between friends both online and in the same room. The game fully embraces its style and doesn’t become annoying. However, a lack of deep progression, variety, and reasons to come back and play mean that Hyper Jam is a game I will play every few weeks or months, but not on a consistent basis.

Hyper Jam's core gameplay is engaging and fun with friends and against random opponents. Its style is bold and vibrant giving the game a memorable vibe. However, a lack of progression and variety means this is a game I will only break out for 30 minutes of fun when I have friends over.