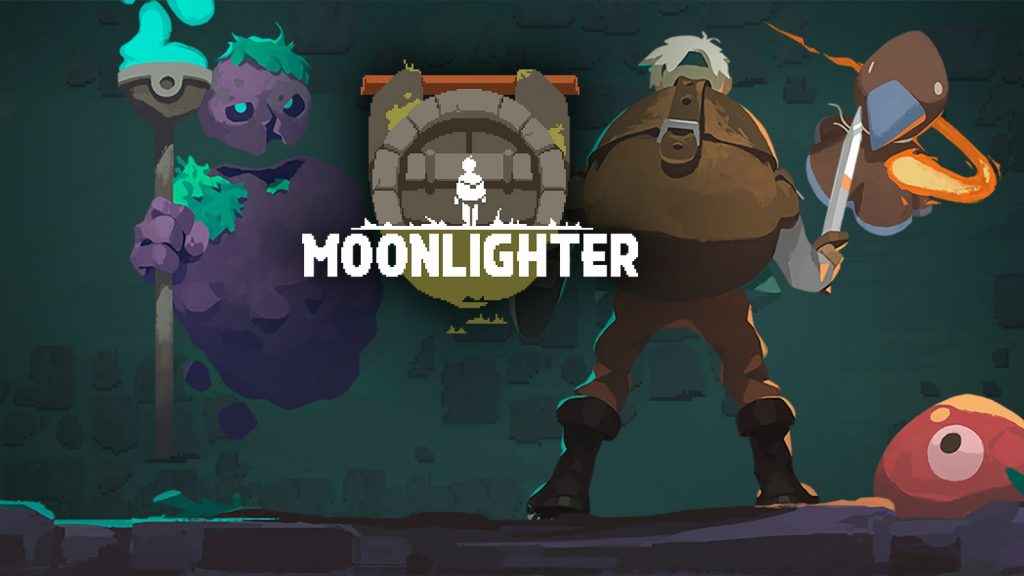 I can’t help but think that if my last job in retail had me rocking up to dungeons, mashing a bunch of monsters before stealing all of their loot and then going back to my shop to sell it all, that the whole wretched experience would have been much more tolerable. Sadly, that was never the case, however Moonlighter from fledgling developer Digital Sun aims to give us all a bite at that particular fantastical apple and in doing so, fashions one of the more polished and smartly designed dungeon crawlers you can get on PS4 right now.

Set in a fantasy world where a series of gates have been uncovered that lead to a number of different realms stuffed with treasure, Moonlighter casts player as Will, a young upstart who has taken over the titular Moonlighter shop from his dearly departed parents in the hope of plumbing those otherwordly places for their loot so he can turn a profit and eventually become a hero.

Moonlighter is divided into two very separate halves – on the one hand you have the roguelike dungeon crawling that fans of Enter the Gungeon and The Binding of Isaac will be able to appreciate, and on the other, you have the shop management side of things where you must sell your spoils for profit which can then be reinvested into upgrades for the shop, or, upgrades for Will himself.

In terms of the former, Moonlighter acquits itself pretty well. Being a dungeon-delving roguelike, Moonlighter displays many of the hallmarks that one would expect to see from an adherent to the genre, so expect to lose all your gear when you die, expect randomised dungeon layouts and quite obviously, expect shedloads of different types of loot for you to hoover up. Rather than just one continual set of dungeons, Moonlighter splits up its levels into five very different realms with each one having a specific element attached to it that many of its monsters utlilise – the first realm is called the Golem Realm and sports a great many animated stone enemies as a result, and so on and so forth with the other realms being unlocked as you progress through them and become stronger.

Now, the first thing to note is that the combat in Moonlighter is pretty darn enjoyable. Being able to block, attack, evade, perform ranged attacks and use special potions to buff yourself or damage your enemy, there is a fair amount of creative latitude for the player to exploit when it comes to resolving Moonlighter’s many monstrous encounters. This being a game cut from the roguelike cloth, Moonlighter also does that great thing whereby it forces you to work out whether you should quit while you’re ahead (a handy amulet teleports Will out of the dungeon and deposits him back into the outside world), or, press onto the next room in the hope of scoring bigger and shinier hauls of treasure to benefit your longer term prospects.

Because of this dynamic, every dungeon room that you can go into essentially becomes a calculated gamble of risk versus reward and its one that invariably adds an extra layer to Moonlighter’s already accomplished dungeon crawler sensibilities. Rather than just looting with reckless abandon, certain items that you collect have special effects which mean that they must be placed into your bag in particular ways. One stack of items might, for example, need to be placed in the left side of the bag and nowhere else, while another stack of items might be cursed and will destroy the items in the slot to next to it once the player leaves the dungeon. It’s a well considered and great little wrinkle to the usually braindead looting mechanic that so often permeates Moonlighter’s peers in the dungeon crawler genre,

Though a grandly entertaining take on the roguelike dungeon crawling formula, the seemingly singular chink in Moonlighter’s armor, at least as far as this aspect is concerned, is that despite being procedurally generated, you seem to run into the same room layouts rather more frequently than you might expect to which makes the dungeon delving ultimately quite predictable as a result.

Existing outside of that roguelike bubble is the shop management stuff that serves to make Moonlighter so unique among its peers in the first place. Once you’ve gotten yourself a back-breaking haul of goods to sell, you can go into your shop (which also doubles up as your home), and place your wares for sale on the table. Where things get more complicated however, is that you won’t really know how much to charge for your goods to begin with and so you need to pick a price for each one and then gauge the reaction of your customers (depicted as one of four different emoji style speech bubbles), to decide how much to charge for your items in the future.

Beyond working out the best price to sell things for, you also have to keep your tables plenty stocked, cater for special customers who are after special items and keep an eye on any thieves that might attempt a spot of shoplifting, too. And believe it or not, there’s actually quite a bit of satisfaction to seeing your shop function and sell items, not least because the incentives for earning money are myriad to say the least.

Rather than just squirreling your profits away, you can actually spend them on either upgrading your shop, or, paying for extra vendors and other businesses to pop up around the town of Rynoka that serves as the setting for Moonlighter’s non-combat shenanigans. In the case of the former, you can spend money to upgrade your chest that allows you to hold more items in stock for example, whereas upgrading your till provides bigger tips, upgrading your bed makes you rested for dungeons (basically increases your health above its cap) and so on.

In terms of paying for extra shops and vendors to take root in the town, this benefits your ability delve into those dungeons directly as you can purchase potions from the alchemist and buy recipes from the blacksmith to create armor and weapons (assuming you have the other materials to complete the construction). Additionally, you can also pay for a bank to start business in Rynoka in order to allow you to consolidate your funds a little better than you were able to before. Simply put, there is no shortage of compelling reasons to raid Moonlighter’s many dungeons and as such, the game can easily swallow your social calendar without you realising it.

It also doesn’t hurt that Moonlighter is quite the audiovisual treat, too. Echoing the top-down, 2D aesthetic that seems to have gone through a second renaissance recently with titles such as Enter the Gungeon, Moonlighter’s visuals are colourful and rammed with twee character, while the soundtrack is handcrafted by David Fenn – the chap responsible for producing the soundtrack for fellow dungeon crawler, Titan Souls.

Despite such an obviously high standard of presentation, some annoying bugs and glitches did rear their ugly noggins to slightly tarnish the experience somewhat. From blank screens that require a restart (fortunately Moonlighter saves automatically and often) to customers being stuck in your shop that prevent you from closing, there is still seemingly a little more that could have been done to bring Moonlighter’s level of polish in line with the calibre seen elsewhere and throughout its otherwise impressive offering.

There’s nothing quite like Moonlighter on PS4 right now. A deeply entertaining, long-lasting and handsomely constructed dungeon crawler with charm to spare that also boasts an equally well crafted shop keeping mechanic, folks looking for a wonderfuly fresh take on the dungeon crawling formula would do well to ring Moonlighter’s bell and enter its premises of considerable delights.

If you enjoyed this Moonlighter review, why not take a peek at some of the cracking indie games you can get for your PS4 in our handy feature.