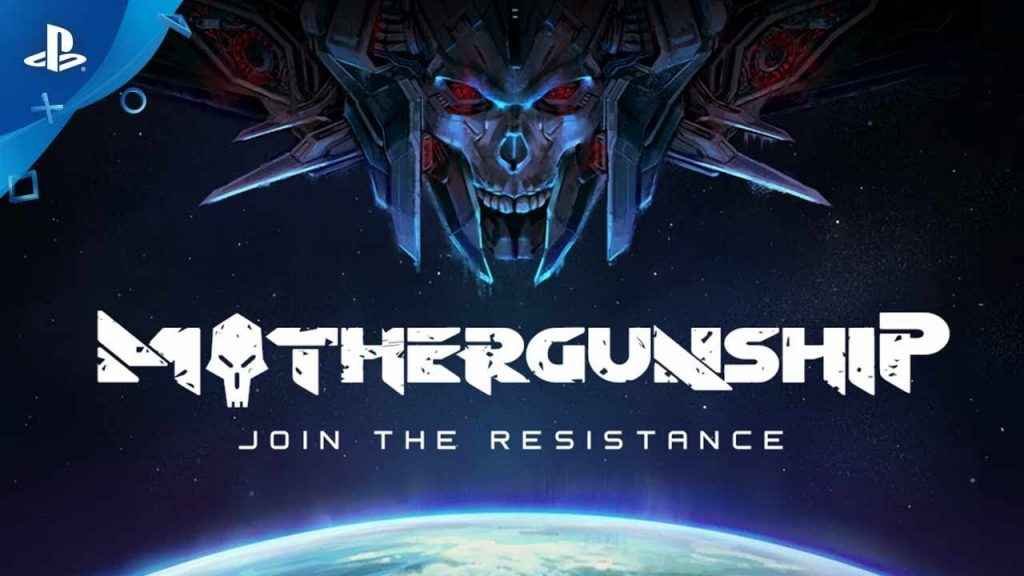 Mothergunship is quite the curio – a bombastic mixture of FPS, roguelike and bullet-hell elements all tied together with lashings of irreverent humor, the latest effort from Terrible Posture Games feels like in no small part the bastard offspring of DOOM and Ikaruga. Such a marriage is not a bad thing however, as Mothergunship proves to justify the sum of its classically inspired parts with aplomb.

The story, such as it is, puts you in the big stompy boots of a mechsuit from which you are to dispense limitless death and destruction upon a cabal of machines called ‘The Archivists’. The reason for such wanton firearm-based violence? Well, these machines are holding Earth hostage and in the spirit of freedom, liberty and all that stuff, these invaders must be dealt with in the most extreme, shooty way possible. This is Mothergunship and it is a lot of fun.

Mothergunship Is A Gloriously Over The Top Shooter

A spiritual sequel of sorts to Grip Digital’s last shooter effort, the largely underrated Tower of Guns, Mothergunship plays very similarly as a result. You see, to defeat the Archivists you must work your way from ship to ship, destroying enemies, gaining upgrades to become more powerful over time and completing objectives. In practice, Mothergunship’s numerous procedurally generated levels manifest themselves as a series of rooms in which all the enemies must be vanquished before you can proceed on.

Once you’ve cleared a room, very often the levels in Mothergunship have multiple paths that allow you to choose which room to go in next, with some chambers giving you challenges to complete, a shop to buy equipment or a boss to tangle with. The great thing is that because the levels in Mothergunship are procedurally generated, you’ll very often never get the same room twice which helps to keep things fresh and engaging and you’ll have to deal with more than just blasting enemies too, as there will be traps to avoid and platforms to leap upon to keep you on your toes.

Mothergunship also feels a lot like DOOM’s most recent 2016 offering in terms of how it plays, too. With a super smooth framerate that rarely dips beneath 60 fps that when coupled with the sort of flighty, ultra-fast movement that id Software’s magnum opus is known for, killing stuff, dodging between rounds of incoming enemy fire and leaping about the place all feels tremendously satisfying and helps cement Mothergunship as one of the more enjoyable shooter efforts of the year so far.

When you’re not tearing through the Archivists ships and laying waste to their number, you’ll be spending a fair chunk of time creating new weapons and upgrading your character. In terms of the latter, Mothergunship dishes out experience points for every destroyed foe in addition to points for completing both main story missions and side-missions. Once accrued, these points can be put into a number of different stats such as bolstering your health or increasing your jumping capacity to name just a couple. Even dying in Mothergunship doesn’t leave you penniless as are you still awarded experience points for the time that you were alive – a nice gesture that helps to keep a feeling of reward at the forefront of the experience.

Beyond tweaking the stats of your character, Mothergunship’s most interesting progression aspect is its gun crafting system that lets eager robot destroyers fashion all kinds of guns and firearms to aid them in their cause. Split into the three categories of connectors, barrels and caps, Mothergunship enables players to stick together all manner of different firearms depending on the parts that they’ve bought during each mission with hard-earned credits, or, those parts that they have earned from completing missions and other objectives.

From a multiple-barreled turbo shotgun to a launcher that spits out massive lava rockets, the sheer variance of guns that you can create is only equaled by the incentive to do so as you progress through the game and pursue the higher quality parts become available. Where things get especially interesting is in the Mothergunship’s side missions where you are forced to use the parts that they give you (you can only carry a certain number of gun parts to and from each mission), and thus this focused approach makes a change from Mothergunship’s otherwise free-form take on gun creation.

Mothergunship Is An Essential Prospect For Shooter Fans

Acting as the bonding glue that keeps the whole package stuck together is the humor. From the get go Mothergunship surprises with the sort of irreverent comedy that once might expect to see in the Borderlands games. Stuffed with gags, charming wit and pop culture digs, Mothergunship is as much winking with one eye at the player as it is encouraging them to mercilessly fill their enemies with holes.

One of the biggest reasons why Mothergunship succeeds is because it not only gets how to make a compelling shooter, but also because developer Terrible Posture Games has a thorough and practiced understanding of how roguelike elements work. Every attempt at Mothergunship’s myriad of challenges always feels productive whether you succeed or dying trying in a ball of fire and shell casings, and crucially, each time you step back into the fray you always feel a little more capable than you did before.

Much like the modular nature of its near infinitesimal number of firearms, Mothergunship feels like it has been stuck together at odd angles with bits and pieces that don’t really look like they belong, and yet, the coalescing of elements has resulted in something quite exceptional. More than finally delivering on the promise of its four-year old spiritual prequel Tower of Guns, Mothergunship is a thoroughly modern and satisfying shooter in its own right, capable of comfortably standing shoulder to shoulder with the upper echelon of the genre.

Mothergunship is available to buy right now on PS4, PC and Xbox One

A furious and value stuffed effort, Mothergunship is one of the most exhilarating and satisfying shooters you can get on PS4 right now.