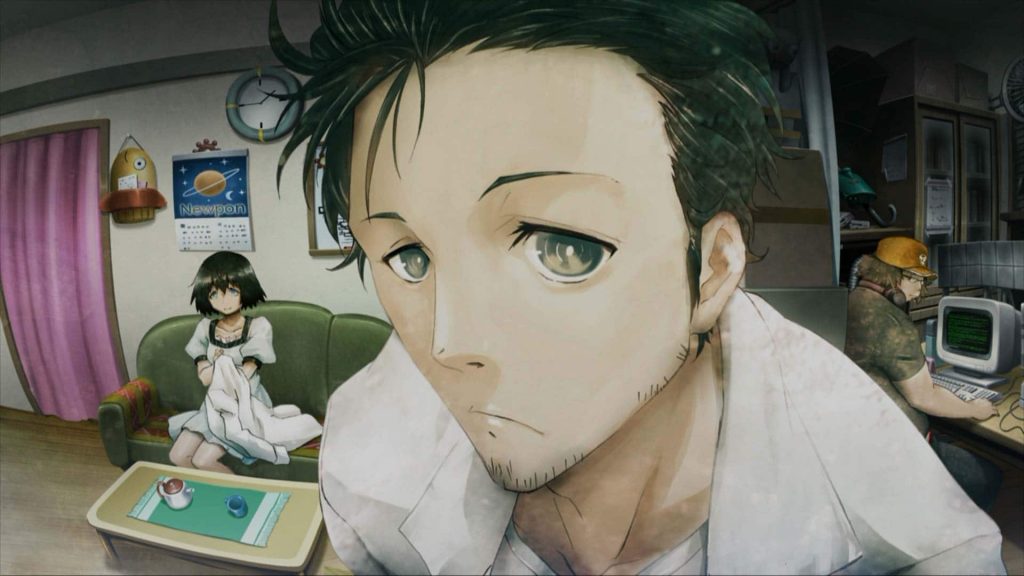 Upon first glance for the uninitiated, Steins;Gate Elite might well seem like a messy entanglement of overly convoluted themes about time travel and characters whose personalities often err towards the off-puttingly idiosyncratic.

Like all the best visual novels however, Steins;Gate Elite not only tells its story with deft execution that carefully leads the player through its winding labyrinthine expanse, but it also holds the distinction of being arguably the best way to experience its story some ten years on from the release of the original Steins;Gate visual novel. If you’re into visual novels, then this, my friends, is The Good Stuff.

Steins;Gate Elite Is A Consummate Take On Its Source Material

The second installment in the ‘Science Adventure’ series of visual novels originally developed by Japanese code-house 5pb, Steins;Gate Elite tells the story of a group of eccentric Japanese students in the year 2010 who stumble across time-travel after experimentation with their modified microwave allows them to affect the past (but not before many bananas are sacrificed – seriously). Throw in a global conspiracy involving SERN, the folk behind the Large Hadron Collider, and the mysterious John Titor who claims to be a time-traveler from a dystopian future, and it soon becomes clear that narratively speaking, Steins;Gate Elite is balancing a great many plates indeed.

Thankfully, I can report that for the vast portion of its duration, Steins;Gate Elite manages this balancing act with poise, adding in a number of monologues, interactions and the simple ability to pause the story at anytime in order to unpack just what is happening as a collective means to help the player absorb the story with minimal trouble.

Chiefly, it helps that the characters in Steins;Gate Elite are such a memorably well-written bunch, too. Though arguably it is the main protagonist, Rintaro Okabe, who ends up stealing the show – not least because of how entertaining and simultaneously tragic he is. A toweringly awkward devoted disciple of sci-fi and scientific discovery, he has created an alter-ego for himself called Kyouma Hououin – a self-professed mad scientist that wants to plunge the world into chaos.

Between pretend phone calls on his mobile phone to nobody and constant, to-the-point-of-failure role-play that alienates all but his most loyal friends (whom he amusingly attempts to indoctrinate into his own drama), it’s obvious that Okabe deeply struggles socially, and while his eccentricity more often than not results in humor, it can be gut-wrenching to see his grip on reality become looser, little by little, as the story progresses.

Though Okabe’s outwardly charming awkwardness and generally offbeat behaviour make him an endearing central character, he is ably supported by a cast of other great characters too. From his airhead best friend Mayuri who is obsessed with cosplay and pop-culture to Kurisu, who is an actual student genius with a bonafide scientific pedigree, the cast of Steins;Gate Elite are very much a lovable and charismatically resonant bunch for whom it is easy to share an emotional bond as they each struggle with their plight.

And speaking of plight, central to Steins;Gate Elite is the theme of time travel and more emphatically, the actions and consequence that occur as the result of messing around with it. With such weighty themes, it’s refreshing to discover that Steins;Gate Elite wields such subject matter with remarkable alacrity and leverages real-life theories, such as Einstein’s Theory of Relativity, to substantiate itself via a handy tips list that explains such jargon in simple and accessible terms.

Likewise, it’s also to the credit of the story that many of the elements contained within it have a strong basis in our own reality. There was, for example, an actual individual called John Titor who appeared on online message boards back in 2000 and 2001 and who claimed to be a time-traveller from the future. Equally, CERN (deliberately misbranded as SERN within the game), is also a very real organisation that is responsible for the research, construction and maintenance of the Large Hadron Collider, too.

Steins;Gate Elite Is One Of The Best Visual Novels Available

Streets ahead of the handsomely made, though confusing and often poorly paced anime of the same name that frequently fumbled the labyrinthine story and complex thematic beats, Steins;Gate Elite is a much more easily digestible proposition by comparison. A big reason for this is the format – as a visual novel, players are free to press through the story at their own pace – soaking in the dialogue, context and minor details of every scene; instead of being rushed along.

Furthermore, Steins;Gate Elite takes additional advantage of its visual novel format to allow players to explore the depths of the story even further than ever before. One such example of this is where Okabe is browsing online message boards on the trail of John Titor. Here, players get to view every post on the message board – including both those from Okabe and Titor, which in turn serves to enhance the world building of Steins;Gate Elite – something that would be impossible to do in any other motion video medium.

Another element that helps to galvanise the understanding of the audience in the proceedings are the regular monologues from Okabe, as they not only provide extra detail on his backstory and state of mind, but also give precious additional context to any scene that he is involved in. Of course, Steins;Gate Elite being a visual novel means that there is precious little interaction, other than pressing through the story from one scene to the next, but there the player still has sufficient agency to direct the path that the story follows.

Pointedly, there are numerous divergent points throughout the story which depending on what is selected, drives the story down down one of a number of different avenues, which not only allow for multiple endings, but also a great deal of repeat play as well. Speaking of repeat play and longevity, Steins;Gate Elite cements its position as the definitive version of its source material by including an HD remaster of 2013 series entry Steins;Gate: Linear Bounded Phenogram which sheds yet further light on the backstories of each of the characters in the game.

Presentation-wise, Steins;Gate Elite is nothing short of a marvel. Though there are some small issues with the English translation, such as a missed word here or there, ultimately the standard of the localisation here is very good indeed and a credit to those whom have laboured upon it. Visually resplendent, Steins;Gate Elite not only boasts hours upon hours of fully animated scenes and interludes from the anime, but it also includes a swath of brand new, never seen before art and animation to account for the non-linear story scenes that weren’t present in the anime or earlier Steins;Gate games, too.

A wonderfully offbeat and toweringly engaging story wrapped up with some of the most interesting characters you’ll meet in a while and some truly sublime presentation, Steins;Gate Elite is quite simply one of the best visual novels available on PS4 right now and a great starting point for folks that are new to either Steins;Gate or the visual novel genre at large.

Easily one of the best visual novels available, Steins;Gate Elite is a stellar and beautifully framed retelling of its source material and one that is grandly suited to series newcomers and stalwarts alike.