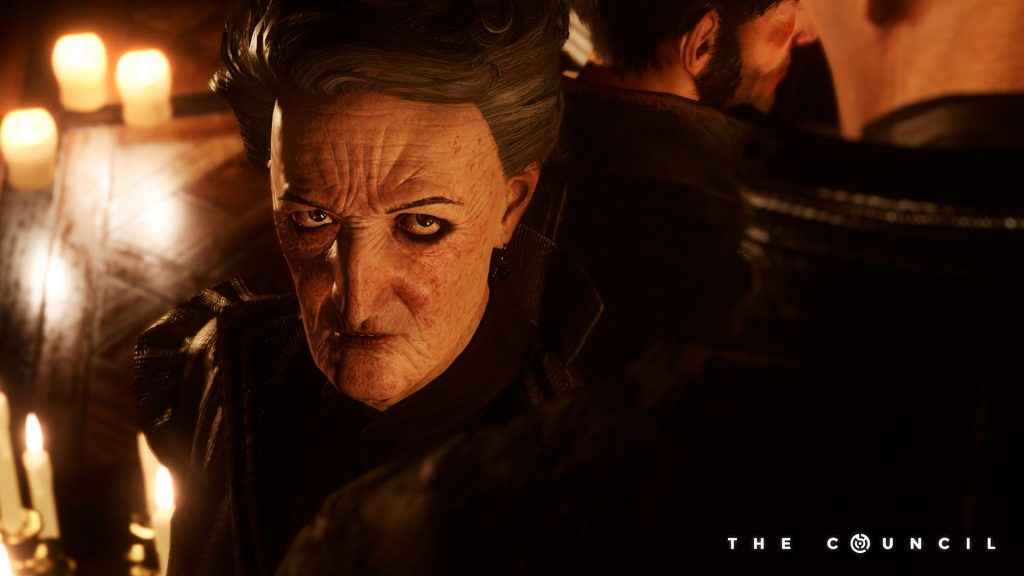 Now that we are at the halfway point in The Council there are two things that are apparent – first, with its RPG systems, focus on the mature themes and deep social interactions that there is nothing quite like it and second, the re-use of environments and comparatively lower amount polish to previous episodes is seemingly indicative of a series that might be running out of steam.

Taking place right where the end of episode two left off (beware ye who hate spoilers as there will be some mild spoilerage from this point), The Council Episode Three, known as ‘Ripples’, greatly deepens the narrative in a number of different ways.

As has been the case in previous episodes, the geopolitical power games which have served as the bedrock for The Council’s narrative remains at the fore, as the various representatives from different countries all struggle to further the ambitions of their homeland. Indeed, after two episodes of constant teasing, when Lord Mortimer’s plan is finally revealed in Ripples, the stakes in this regard soar immediately and lend an interesting fictional explanation for historical events.

Ostensibly, The Council remains a mature and intellectual work that often toys with a wide range of intellectual themes, such as regency versus democracy, the extrapolation of classical art and tragedy and much more besides.

This time however, the veil begins to be pulled back on the reason why all these highly influential folks have been summoned to the island, as themes of occultism begin to deeply encroach, and it’s here that in the third act of this episode that The Council really starts to kick its storytelling sensibilities into high gear.

Ripples Is The Weakest Episode So Far

Beyond its mature themes and wholly intriguing social subversion RPG style systems, where you could put experience points into different disciplines and use them to accentuate vulnerabilities you discover in others, another area where The Council traditionally excelled was in its thought provoking puzzles which were remarkable because they actually required some thought to solve and didn’t treat you like an idiot.

In The Council’s third episode however, there are only really a couple of conundrums that require any thought to solve – a disappointing revelation given the frequency of the brain teasers in previous episodes.

Another issue with Ripples is that, again, when compared to previous episodes, this time in terms of polish, this episode comes up short. From odd sound sampling errors that make Louis occasionally sound like he has inhaled a whole bunch of helium, to a range of visual glitches, it is clear that The Council’s third episode could have certainly have done with a chunk of extra development time.

The most frustrating of all the issues that stain The Council’s otherwise noteworthy caliber however, is that as we saw in the previous episode, the developer seems very keen on re-using many of the locations that you had visited before. Now, in the second episode this didn’t seem quite so bad because a whole new garden maze area and crypt was put into place which staved off the feeling of familiarity somewhat.

In Ripples though, the only new area which has been created is a small room that adjoins to the previously implemented crypt area – a fact that suggests that the developer’s already modest budget is being stretched to breaking point long before the final episode has even arrived. Here’s hoping that the next episode can feel much fresher in this regard.

Though arguably the weakest episode so far, The Council still remains quite unlike anything else currently available on PS4. The plight of Louis De Richet, his mother and their clandestine Golden Order remains a compelling one and the story is at last seeming to be kicking into high gear and promises to have a decent pay off to say the least.

Ultimately though, the worrying and increasing lack of polish, the decrease in challenging puzzles and a failure to venture beyond previously visited locations threatens to tarnish one of the PS4’s most interesting narrative adventure series.

Review code supplied by the publisher. The Council Episode Three: Ripples is out now on PS4, PC and Xbox One.

Continuing to be one of the most intriguing narrative adventure series you can buy right now, Ripples furthers the narrative in a variety of interesting ways but nonetheless shows that The Council is in dire need of some fresh locales with which to embrace.