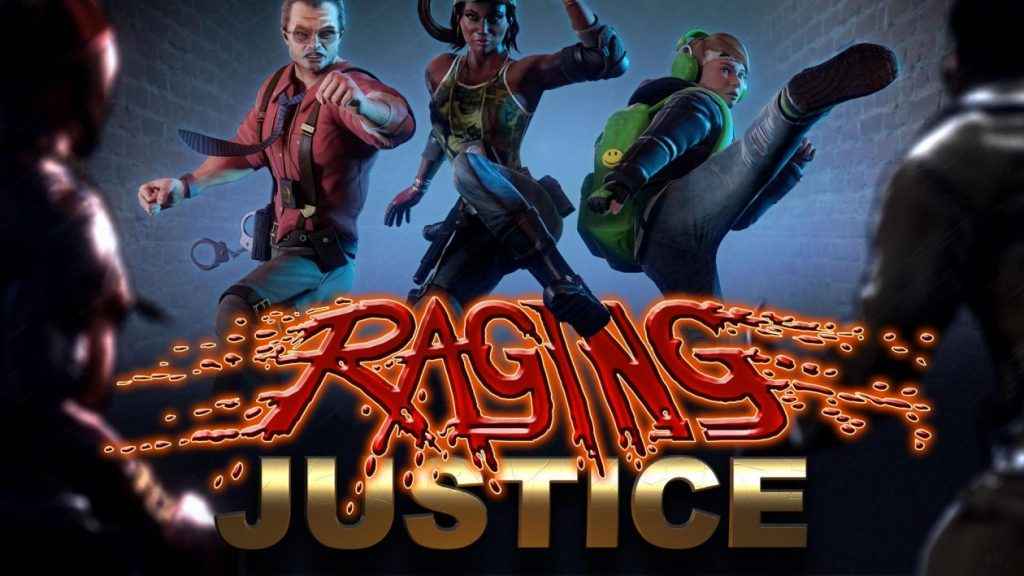 With protagonists that go by the names of Nikki Rage and Rick Justice, it’s fair to say that Raging Justice has little inclination to pursue anything remotely resembling nuance. Of course, such an on-the-nose approach is just what one might expect from an effort that aims so doggedly to emulate the side-scrolling brawlers of yesteryear, and Raging Justice, despite its lack of ambition to do much more than that, still manages to reliably entertain fans of the genre all the same.

The plot, such as it is, is one that will prove familiar to fans of the genre. With the city in chaos and powerful thugs at large, only police officers Nikki Rage, Rick Justice and scrappy street kid Ashley King can bring the power behind this unrest to justice via a mixture of skull shattering punches, kicks, knees, throws and whatever else might come to hand at the time. In short, violence is the answer, lots and lots of violence.

Naturally, this violence unfolds in classic fashion with our heroes proceeding from left to right, putting fists to faces, scooping up health and picking up whatever weapons they find along the way to make said violence easier to pull off. So far, so 1992 then. Though the animations look a little stodgy, it’s still fair to say that the combat in Raging Justice feels ultimately satisfying and is actually pretty enjoyable in spite of its shonkiness.

As per the status quo for the genre, our heroes have access to a mixture of punch and kicking combos, grabs, throws and crowd clearing special attacks that need to be dished out on the goons that rush onto the screen, while all manner of crates, phone boxes and more lurk about each level which must be smashed open in order to retrieve the useful items that lay within.

Additionally, a number of finite use weapons and vehicles are also available to support our protagonists in their seeming never ending quest for violence, ranging from relatively tame items such as bottles, bats and knives, through to more exotic fare such as guns, grenades and tractors; the range of punk-dispensing actions you have at your disposal remains pleasingly varied.

By seeking to faithfully replicate those side-scrollers of a bygone era, so too does Raging Justice also invariably replicate their failings. Boss fights for example, regularly veer towards the unfair with big bads that deal far too much damage and have uninterruptible special attacks which make them much more of a chore than a pleasure to deal with.

Equally, many of the encounters you come across in Raging Justice follow tropes that acolytes of the genre will be wearily accustomed to, such as the stampede of motorcycle riding enemies that can only be flying kicked, enemies that throw explosives which must be avoided and so on and so forth. Where Raging Justice seeks to distance itself from the established side-scrolling template however, is in the good and bad cop mechanic that sits at its core.

Taking advantage of the fact that the protagonists are, well, cops, Raging Justice allows players to handcuff their foes once they have them in a dazed state and doing so provides good cop points, whereas bashing in skulls with reckless abandon dishes out, you guessed it, bad cop points. As one might expect, there are benefits to pursuing either school of justice.

By playing as a good cop and arresting wrongdoers, you stand the chance of gaining health with each arrest, but more importantly, you can also work towards completing special level challenges too. Arrest warrants for specific named enemies are given out at the beginning of each level and provide the player with additional health and items should the player succeed in handcuffing the target of the currently active warrant, so there’s plenty of incentive to pursue that style of play.

Where the bad cop side of the equation comes into things however, is that it might not always be prudent to embrace such pacifistic methods when you find yourself surrounded by a horde of goons, and so, in the spirit of wanting to get them into the ground as quickly as possible and preserve your health bar, you become the bad cop and batter them to death instead.

As such, the good and bad cop mechanic introduces a neat risk and reward dynamic to Raging Justice that not only affects the fashion in which you might decide to play, but also provides the game with additional replay value as each level has its own challenges and warrants to be completed with ample rewards for doing so. Speaking of repeat play, though the story campaign is fairly one note, Raging Justice also encompasses a wave based brawl mode that can also be tackled, which while entertaining in the short-term, unfortunately does little to meaningfully bolster the overall package.

With its garish, trashy locations, pre-rendered character models with their deliberately jerky animations and mind-numbingly simplistic scenario, Raging Justice is under no illusion as to just what it is and that in itself is hugely refreshing. Equally, like all contemporary side scrolling brawlers that have an eye on the past, Raging Justice is arguably much better when played with friends in its local co-op mode, so if you can get the mates and the extra pads in, Raging Justice is an affair that is definitely worth the price of admission.

Ultimately, though Raging Justice isn’t quite up there with the likes of Wulverblade or even its inspiration in Sega’s Streets of Rage, it nonetheless remains a steadfastly entertaining take on the side-scrolling fighting genre and one which, at the price of less than ten bucks, is pleasingly difficult to ignore.

If you enjoyed this Raging Justice review, take a peek at our feature chronicling some of the other PS4 indie games that you can buy right now.

Erring on just the right side of trashy, Raging Justice doesn't break any significant new ground for the side-scrolling brawler but it succeeds as an entertaining effort all the same.