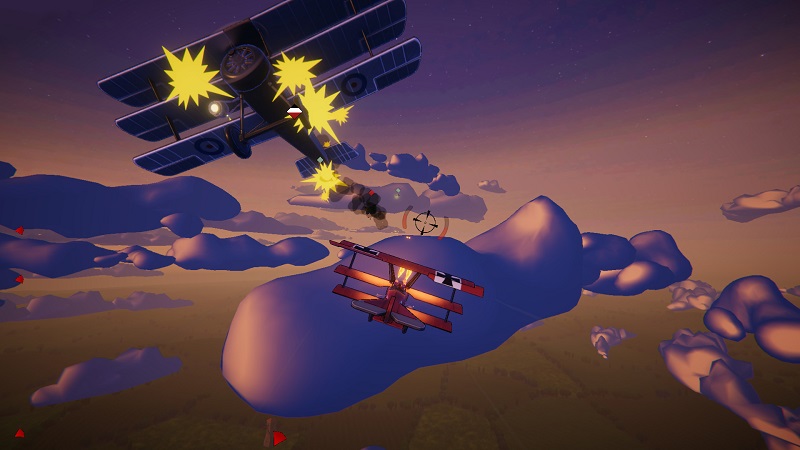 Red Wings: Aces Of The Sky PS4 Review. If there’s one thing we don’t have a lot of on PS4, it’s First World War combat aircraft romps where you can stalk the skies in an old-fashioned biplane or triplane, wreaking havoc on your enemies in the sky and on the ground. Enter then Red Wings: Aces of the Sky which aims to address this somewhat unfortunate situation, providing players with some instantly fulfilling aerial arcade action.

The problem is however, this dogfighter ultimately stalls rather than soars on account of how overly simplistic and occasionally underwhelming it is.

First though, the good. Red Wings certainly looks the part, with a colorful cel-shaded visual style that lends the game a playful aspect that will surely bolster its appeal among the younger folk and those looking for a more stylized approach to aerial combat.

Likewise, Red Wings is simple to play too – with all manner of dives through the clouds, rolls and high-octane dogfights being easily achievable by players of all skill levels. Neatly, players get to pilot one of ten aircraft belonging to the Entente Powers and the Triple Alliance too, with each boasting their own strengths, weaknesses and unique characteristics.

Also, there’s some unexpected depth here as Red Wings provides players with finite use special skills that can be used during each sortie to even the odds. This includes the ability to dive and pick up in a climbing roll to switch the pursuit on someone chasing you through the skies, while a special execution ability allows players to somewhat comically pull out a pistol and shoot a weakened enemy pilot in the head for an amusingly cinematic instant kill.

While the actual act of flying around the place and getting into it with enemy pilots is fun enough, there sadly just isn’t enough variety in the mission types to keep things interesting. Your airborne sorties tend to consist of destroying other planes and airships, while sometimes things are changed up with the odd bombing run or mission that has you flying through a course of hoops suspended in the air. It’s hardly rip-roaring stuff.

Red Wings: Aces of the Sky also boasts a narrative driven single-player campaign, as players elect to choose either the Entente Powers or the Triple Alliance as they engage in battles over the skies of war torn France. The problem here though, is that the story is told through a small handful of comic book style paneled cutscenes, a fairly uninspiring voiceover and that’s pretty much it. To say that it does a poor job of drawing you into the story would be quite an understatement.

Completing missions during the campaign also awards points that can be used to purchase new skills and abilities, such as an additional execution kill, more fuel and things of that ilk, but again, it’s all so uninspiring, it’s difficult to get excited.

Finally, beyond the trappings of Red Wings single player trappings the game does offer a variety of local multiplayer modes for players to get stuck into. In addition to permitting two player cooperative play on the main story, Red Wings also provides some versus and survival modes for players to enjoy too. The problem is though, none of it feels particularly fresh or inspired, but rather as some kind of afterthought that feels tacked onto the game.

In the end then, Red Wings: Aces of the Sky ultimately fails to properly fill that void that exists as it pertains to flying combat aircraft during the First World War. Sure enough, the visuals are certainly pleasing to the eye and the handling of the aircraft also feels decidedly on point.

If you fancy quick two to five minute missions in an arcade style aircraft shooter than Red Wings will likely hold some degree of appeal for you, but the lack of compelling mission types, a lackluster campaign and generally uninspired game design all conspire to put Red Wings in a tailspin that sends it plummeting to earth in quick fashion.

Red Wings: Aces of the Sky is out now on PlayStation 4.

Attractive visuals and decent handling isn't enough to pull Red Wings: Aces of the Sky out of the doldrums of mediocrity, thanks in no small part to a distinct lack of variety in the mission objectives and uninspiring game design.

Red Wings: Aces Of The Sky