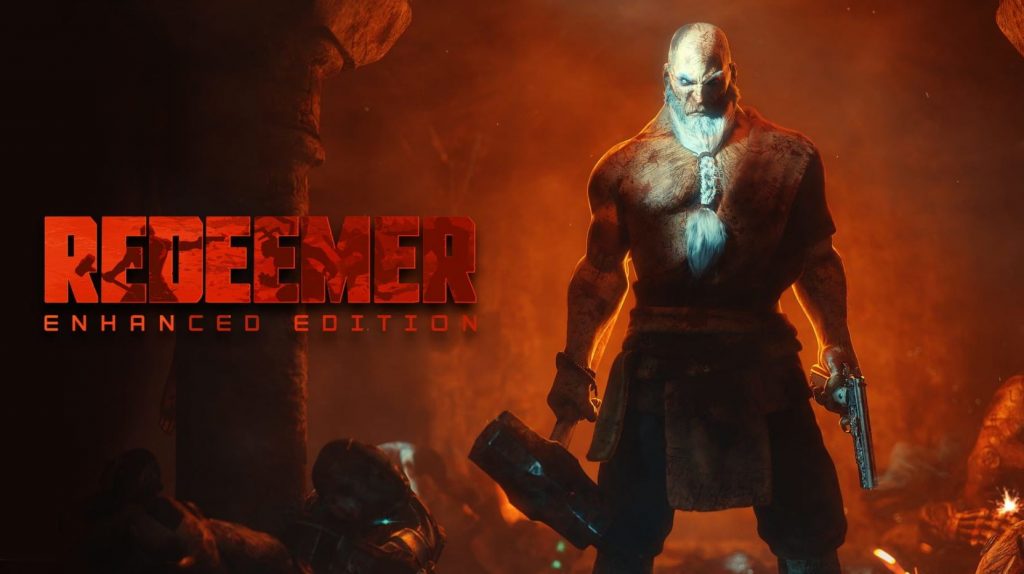 Take one glimpse at the trailer for Redeemer: Enhanced Edition at the bottom of this review and it’s clear that Russian developer Sobaka Studio knows exactly what it has on its hands. Redeemer is a furiously violent top-down actioner within which a paper thin story merely serves as the backdrop for some of the most satisfying combat we’ve seen on PS4 in quite some time.

Vasily, a former elite operative belonging to one of the largest cybernetic companies in the world has instead sought a life of peace and tranquility for the last twenty years; the snowbound mountains and an order of monks now being called his home. Naturally, things that seem too good to last generally are, and it isn’t long before Vasily’s old buddies come knocking on the door with a view to murder everyone and thus, Vasily’s story begins. And by ‘story’ I really mean a leave-your-brain-at-the-door yarn of vengeance that is absolutely awash in sci-fi silliness, carnage, blood and violence.

Redeemer’s Ace Up Its Sleeve Is Its Combat

The combat in Redeemer is deliciously satisfying. Able to switch between melee and ranged weapons on the fly, Vasily is effortlessly capable of dishing out seamless and extreme violence to his enemies, as melee strikes can be linked into combos and executions can be performed on weakened foes for an especially gory kill. Likewise, a Batman Arkham style counter system allows Vasily to easily counter attack opponents from any direction mid combo flow, and helps to cement the fact that the combat in Redeemer feels as tactile as it looks.

Speaking of how good it looks, the combat in Redeemer is certainly not short of brutish spectacle. Indeed, one of the first things I did was kick an armored goon so hard that when he hit a nearby wall he shattered the stones, while in another scenario, I leveraged Redeemer’s savage looking environmental kills to appropriately grizzly effect, jamming the skull of a rushing cybernetic mutant into a handily placed automatic buzzsaw. In another situation, I literally tore the arms off of everyone in the room, the end result being a bunch of very annoyed mutants trying to head/chin butt me to death, but not before I beat them into the ground first with their own limbs.

Certainly then, developer Sobaka Studio is not without a talented eye for violent flair. From the fists and feet that thud and crunch into the various faces, organs and limbs with a sickening squelch, to the camera that swoops in for a slow-motion, split-second showcase of a particularly gory execution, it’s clear that the Russian developer has a firm grasp on how to depict stylish and nihilistic conflict.

More than just a means to progress through the game, the combat in Redeemer serves an additional dual-purpose as destroying enemies not only partially replenishes Vasily’s reservoir of health, but it also awards XP that can be put into various skill categories that unlock new perks in turn. And really, this is as adventurous as Redeemer gets from a concept point of view as every level plays out similarly – you proceed down a set path, murdering everything, dodging occasional traps and maybe offing the odd boss before reaching the end.

And this is the thing, when you’re not locked into that rhythmic brutality that the game does so well, things come unstuck. The boss fights are largely uninspired, simplistic affairs with shopworn mechanics (with the final boss proving to be an absolute cakewalk), while the trap dodging (of which the only two varieties are the tried and tested jets of flame and electrified floor tiles) soon becomes tedious not least because the damage dealt by these traps is extreme and their implementation just feels haphazard and awkward for the most part.

Likewise, when you’re battling through a relentless procession of dreary labs and power plants later in the game, Redeemer is hardly at its most evocative – a shame when you consider the spiritualism that its main character seemingly taps into early on sets the stage for some picturesque battles in ornate temples and nature blessed mountains.

At first glance, you could well be forgiven for thinking that Redeemer is simply the next in a long line of dungeon crawlers, however, there are no barrels or furniture to destroy in the pursuit of ineffectual pieces of gear or slivers of gold, Redeemer is all about the killing and that is its singular focus. While that’s admirable in the pursuit of a streamlined concept, it unfortunately makes Redeemer feel far more slight than it should – especially when you consider that the entire campaign can be whipped through in around five to six hours.

Though collectibles which unlock concept art are scattered across each level, there is otherwise little reason to return to the game once you’ve beaten it short of obsessive trophy hunting. Equally, the arena mode which neatly distills Redeemer’s combat into five to ten minute sessions of gratification merely retools existing levels and enemies into a standard wave-based survival mode – satisfying then, but ultimately nothing that you haven’t seen a thousand times before.

Lifting the experience somewhat is the co-op mode that allows two players to plough through the campaign. Though hardly revolutionary, tackling Redeemer’s campaign with a friend nonetheless provides ample thrills, albeit serving as a reminder that the game really doesn’t offer a whole lot else for folks to truly sink their teeth into. When it comes to polish, Redeemer finds itself lacking a bit here too. Some parts of the presentation, such as the skills screen are very barebones, whereas the dreaded slowdown monster rears its ugly head (even on PS4 Pro), during busy scenes. Also, the odd unsightly crash (mainly in Arena mode) serve to tarnish things further.

All in all then, Redeemer is a lot of fun to play – that much is inarguable. It’s just a shame that with such a bombastic and brutally satisfying combat system, that it doesn’t have a better and more value stuffed package surrounding it. Still, if you’re up for a brutal one night stand of satisfying combat and mayhem, there are certainly far worse offerings out there than Redeemer.

Redeemer is out now on PS4.

Redeemer's combat is world class; revealing itself to be both hugely satisfying and wonderfully tactile. It's just a shame that there isn't enough game built around it and that the game which is there, appears so very unambitious. Nonetheless, Redeemer is more than capable of providing a barrage of violent thrills for a good few hours all the same.