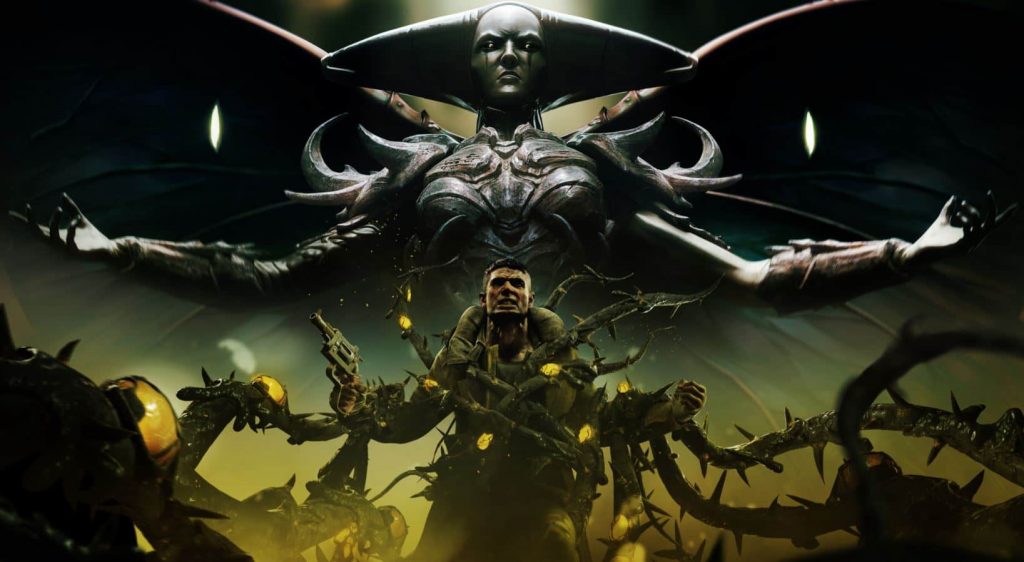 Remnant From The Ashes – Swamps Of Corsus DLC PS4 Review – I’m going to be honest here, I haven’t touched Remnant: From The Ashes since I reviewed it back in August 2019, but I left with a lot of praise for the double-A, mid-market title. Great, weighty combat, challenge, and some gorgeous environments were just a few things I loved.

So, when I got the opportunity to review its new DLC, Swamps of Corsus I was intrigued to hop back in see what has changed and how the improvements to the Corsus zone (which had a lot of issues back in 2019) would turn out. And, in some respects, for its price, this new DLC is absolutely worth it and if you a hardcore player you will love some of the additions, but ten months on the DLC focused around Corsus feels a little thin and surprisingly it doesn’t solve any of the issues Corsus had back when the game launched.

Remnant: From The Ashes – Swamps Of Corsus DLC PS4 Review

So, What Do You Get For Your Money?

Swamps of Corsus is a mishmash of new features and changes, but most importantly it revamps and redesigns much of the Corsus map, adding new dungeons and new bosses along with it. These new dungeons don’t change the outdoor, main map of Corsus, but instead adds entirely new dungeons that connect different parts of the main map.

The new dungeons look gorgeous and are a huge step up from the bland, mechanical, wooden tunnels that were in the game at launch. Those are still there, but now you can also find these long, tall, dark, emerald caves with screeching and bugs scratching in the background. They are imposing, mystical, and haunting. They go a long way to giving the planet of Corsus a more interesting atmosphere than it previously had.

The new bosses and enemies are also great and similarly to the dungeons, far more interesting than what Corsus launched with. Getting to battle the Iskal Queen is as terrifying as you think and I particularly dislike this new teleporting armored spirit monstrosity with claws. He makes the most unsettling of sounds and creepily teleports towards you like the Slenderman.

On top of that, the new DLC adds a Survival Mode, which effectively turns the game into a roguelike. You start off with a pistol, no armor, and just a handful of scrap, you then have to fight your way through a randomly generated dungeon, with a random boss at the end, acquiring new weapons, traits, and armor pieces throughout the dungeon, making you stronger.

However, there is a catch. A timer slowly ticks down as you make your way through the dungeon and once it reaches zero the enemies get stronger forcing you to keep up the pace and not spend too much time dilly-dallying. Once the boss is dead, the timer pauses and you move on to the next dungeon in another random location.

This mode is a little less up my alley and I am not the hugest fan of the timer upping enemies levels. I like the concept of this mode, and the first dungeon actually plays rather well and it is surprising how well Remnant works as a roguelike. It is intense and it had me scrounging for pickups and traits hidden in tomes in a way the main game didn’t.

But, past that first dungeon, the enemy level feels a bit too punishing and it stretches into the unfun area and has me shouting “COME ON!” at my monitor at 1 AM in the morning. If you love a challenge and are down for a mad rush and being under pressure then this mode will probably be your cup of tea, but for me it was like drinking coffee (I hate coffee).

Along with all of that, there is new gear to earn, traits to acquire, and more mods to equip. And, to be blunt, all of this is a lot of content for the $10/£8 price tag, which is far less than what most games will give you for that price these days.

So, What’s The Problem?

The thing is, is that the issues with Corsus, specifically its outdoor areas still haven’t been addressed. In my original review I stated “But, when fighting on Corsus, the game can grind to a halt and become borderline unplayable if enough enemies are on screen at once. Gunfire knows of the issues and will continue to support the game and make it more stable, but at launch, the frame rate drops are unforgivable at times.”

And, unfortunately, I have to report that this statement still remain true for the game ten months on. The frame rate feels slightly better, but outdoor areas still feel like a flipbook at times and my game froze in multiple different areas, before restarting again a few seconds later as I was getting shot in the face.

It’s worth noting that I was playing on a PS4 from November 2013 and the old and new dungeons don’t suffer from any of these problems. But, it feels odd to focus a DLC on a certain location in the game, and not fix the worst issues with the said location. Maybe there is just nothing that can be done about it and Corsus is forever stuck as a gross, insect-infested flipbook, but I feel like there has to be some tweaks to the environment or enemy numbers that could help fix these areas.

Finally, this DLC just feels a bit inconsequential. The new bosses and environments are cool and a huge step up for the game. But as a returning player who hasn’t touched the game in a while, it doesn’t offer much for me and I don’t think it has a lot of meat on its bones.

The best way I can describe it, is that Swamps of Corsus feels like the Clash In The Clouds DLC from BioShock Infinite, a collection of updates and a new mode that doesn’t offer much for those looking for new experiences, whilst the players wait for the real DLC, Burial At Sea, which focuses on the best part of the game. And, for Remnant that is what I am doing, waiting for the Subject 2329 DLC (set to release in August), which offers far more like a new explorable location on Earth, with new environments, a host of new bosses and quests, and a brand new campaign wrapping up the story started in the base release.

The Swamps of Corsus DLC for Remnant: From The Ashes is a tricky one to review, because I know hardcore players and those looking for a challenge will love it. But, as a returning player after ten months and someone who was looking for some meaty new storylines and a new location to explore, Swamps of Corsus doesn’t deliver and left me feeling like a bit empty.

The content that is here though is of high quality, the price is reasonable, and the Corsus dungeons redesign is excellent and they are now the best looking areas in the game. It’s just a shame that the same can’t be said about the outdoor areas of the location.

Remnant: From The Ashes and the Swamps of Corsus DLC is available now on PS4.

Remnant: From The Ashes' Swamps of Corsus DLC redesigns an area of the game to be the best-looking location in it. But, a lack of changes to outdoor environments on Corsus, bugs and issues that are still present ten months on, and a general feeling that there isn't much meat on Swamps of Corsus' bones left me underwhelmed with what is here. Fans looking for a more substantial offering should wait for the final DLC in August.