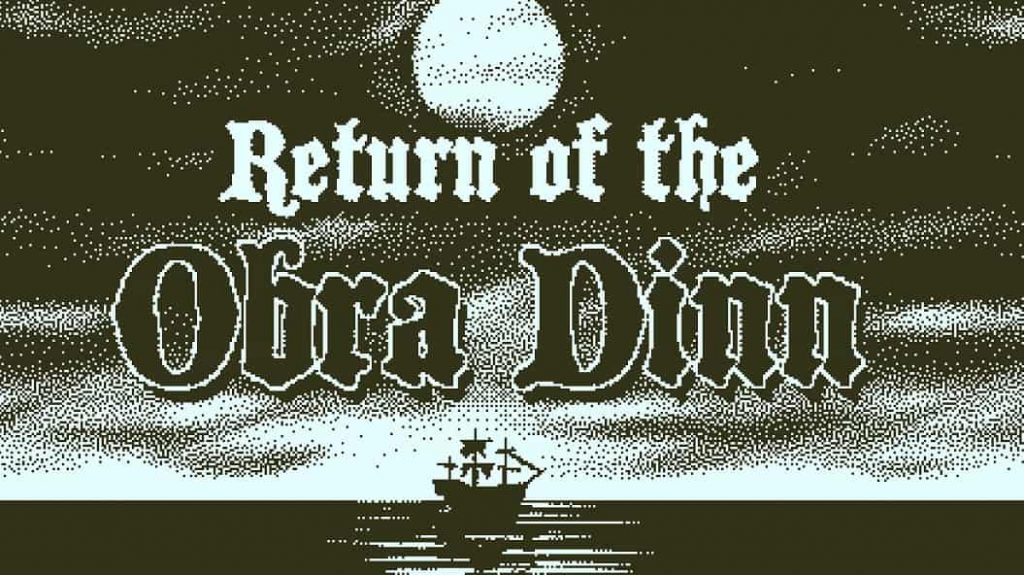 Trust Lucas Pope, the seldom heard developer of the superb Papers, Please, to upend the detective adventure genre in a way that has never been done before with his latest opus, Return of the Obra Dinn. Fashioned in a retina stroking 1-bit visual style that lends the game a beautifully retro noir aesthetic, Pope has succeeded in not just crafting arguably the best detective game ever made, but one of the best PS4 games of the year, too.

The year is 1807 and you are an insurance adjuster for the East India Trading Company, whom, against his better judgment, has ventured down to Falmouth, a coastal town in deepest Cornwall, to investigate what happened to the crew of the Obra Dinn – a company financed trade vessel that has mysteriously come to rest in Cornish waters. Home to 60 crew when it left port in 1803, it is up to you ascertain not only the identity of all those on board, but also the manner in which they met their untimely ends as well. Truly, there can be fewer greater fears than dying forgotten.

Viewed from the first-person, Return of the Obra Dinn begins in blackness, as your tired insurance adjuster has co-opted the help of a local fisherman to ferry him to the adrift vessel, grumbling and moaning about the state of affairs as the bleak weather closes in prior to his ascent onto the deck of the titular ship. After opening your eyes and beholding the starry, black sky that stretches to the horizon, you make your ascent onto the ship. Once there, you find yourself equipped with a ledger into which the events which afflicted the crew of the Obra Dinn must be written, chapter by chapter.

Because you have largely free movement across the entire ship, you’ll often discover and come across events in an entirely non-linear fashion. For example, the very first corpse you’ll come across on the deck is seemingly the result of a conflict that occurred right at the end of events on the Obra Dinn, but no matter what order you discover these events in, your task is to fill the ledger completely, accurately detailing the events that befell the ship and its crew.

Through the Momento Mori, a creepy looking arcane compass, you’ll find yourself temporarily transported back to the exact moment of tragedy that resulted in the death of whomever it is that you’re currently examining. With time frozen, you can walk around the scene, taking in important details about the identity of the deceased, the manner in which they died and the presence of any other individuals in the area.

Discovering the identities of the fallen Obra Dinn crew requires research. Equipped with a crew manifest that details names, ethnicity and ship rank, you must match the deceased to the folk listed in the manifest in order to undertake a thorough audit. Brilliantly, how you do this is through a process of deduction, extrapolating key facts that you’ll uncover from conversations, journals, pictures, and other such sources in an effort to accurately pinpoint the identity of each person on board.

Where Return of the Obra Dinn especially excels is in how it brings a welcome level of sophistication to such proceedings. Decisive and absolute information is hard to come by on the whole, requiring you to often make a leap of logical faith based on the facts that you have at hand. Furthermore, the identity of each character isn’t necessarily discovered by reliving their death either, since you’ll very often come across clues about other characters in the memories of individuals, who at first, don’t appear to be connected.

When it comes to parsing the actual fates of each crew member of the Obra Dinn, facts can be equally murky here too and prove warmly inviting to interpretation. Though you can choose from a wide range of verbs to describe a number of different fates for any given individual, such as stabbing, shooting, bludgeoning, suicide (which has a number of different death causes in itself) and more, it isn’t always clear just how somebody met their end which again, prompts the sort of deep dive sleuthing that Return of the Obra Dinn does so very well.

When you grasp the entirety of your task, and the fact that there are 60 different people on board whose individual identities and fates you must decipher in order to gain a broader understanding of the tragedy that afflicted the Obra Dinn, the whole thing can feel a little overwhelming at first. However, the impeccable beauty of the game’s non-linear design empowers you duly, making you feel akin to a spider dropped into the web of another, diligently following the numerous strands to see where they all lead.

Like the ship itself, Return of the Obra Dinn does much in an attempt to be unyielding of its secrets. And indeed, progression comes somewhat slowly overall, since you need to correctly discover the identities and fates of three crew members in order for them to be typeset, and effectively immortalized in your ledger before you can consider them a closed case, so to speak and thus allow you to narrow the scope of your investigation.

The Return of the Obra Dinn’s Atmosphere Is Unmatched

To say that Return of the Obra Dinn is absolutely drowning in atmosphere would be an understatement. Though the voice acting is extremely well done, with each actor doing a grand job of selling you on their demographic and plight, The Return of the Obra Dinn really manages to capture the imagination with the sheer clarity of its ambient scenes.

Whether it’s the sound of the water lazily lapping against the side of the boat, the subtle creak of floorboards on the gun deck, the thunderous prattle of rain or the howl of the wind as it brushes your face, the atmosphere of Return to the Obra Dinn is impeccable, and makes spending a night on those black waters, underneath the star-quilted heavens of early 19th century Falmouth, all the more alluring as a result. Few games have ever been able to fashion an atmosphere, a feeling of place and a sense of being, as thoroughly as this – let alone with such unconventional veneer in place too.

Developed by Lucas Pope, ported to console by Warp Digital and published by 3909, Return of the Obra Dinn is out now on PS4, PC, Nintendo Switch and Xbox One.

Thickly atmospheric with an impeccable sense of place unmatched by other games, Return of the Obra Dinn is the smart, stylish and curiosity detective adventure that you've always wanted.