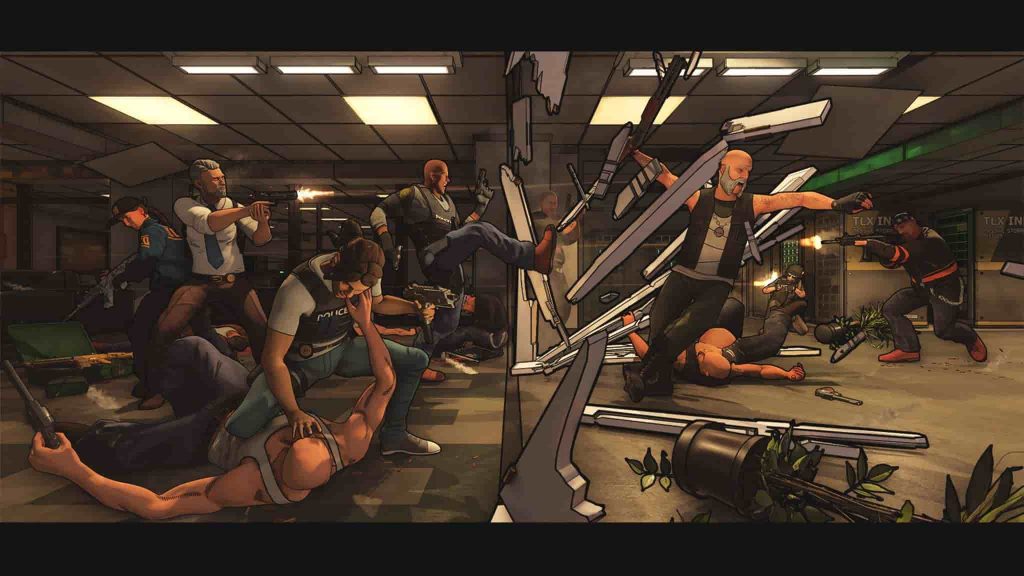 RICO is not a complicated offering, even by the unsophisticated standards of the first-person shooter genre. It is however a highly enjoyable effort that condenses the standard shooter template into something that is both refreshingly pure and accessible through it’s simple premise – as a cop with a rager for shooting bad folks, you bust down doors and then you bust caps into the hostile faces which lay beyond.

And yep, that’s pretty much the gist of it.

What is especially surprising about RICO is just how snappy and lean the whole affair is. Every level plays out similarly – you rock up to a procedurally generated warehouse/office/penthouse, blast your way through, destroying equipment and seizing evidence before getting the heck outta dodge before reinforcements start to swarm you.

At it’s core, RICO is a ten second loop of pure, distilled FPS bliss as you put your boot through the nearest door, the slow-mo kicks in allowing you to get a whole bunch of shots off and you go about clearing the room, before moving onto the next. Sure enough there are some wrinkles to this – you can do a cheeky slide along the floor to change things up a bit, or you can target the nearest red-hued explosive barrel and put a few rounds into it, decimating the rest of the room in turn.

And here’s the thing – RICO feels the part too. Every round that you squeeze off, has its own weight and heft, with the impact of fired rounds as they slam into your targets and the environment being both palpable and satisfying. Likewise, the selection of firearms that you’ll get to grips with, from hulking Dirty Harry style revolvers to sleek assault rifles, all handle wonderfully and feel good to, y’know, shoot with.

So RICO then, is an uncomplicated, though audiovisually stimulating beast – at least on the surface. However, it’s only when you delve into the Case Mode that you can begin to appreciate just how deceptively clever this shooter actually is. Essentially RICO’s take on a traditional campaign, Case Mode has you working way through an interconnected web of punks, lieutenants and criminal captains until you reach the kingpin at the top.

In practice, this means going through one level at a time, with collecting evidence and escaping with said evidence being your primary objective as this will, in turn, unlock other criminals for you to deal with as you work your way up the ranks. Where things start to get interesting however, is when you realize that beyond all that evidence collecting, there are a number of secondary objectives for you to complete too.

It’s not just kicking down doors and shooting faces – oh no, you can also get stuck into defusing bombs, destroying criminal apparatus, taking down key figures and much more besides. As such, the variety of these objectives and the rewards that you get for doing them (which I’ll get into in a bit), make exploring every room you can not only a worthwhile endeavour, but also introduces a risk/reward dynamic; do you scurry away to the exit as soon as the primary objective has been completed, or, do you hang around and complete as many additional objectives as possible?

When it comes to rewarding the player for doing these objectives RICO isn’t short on incentives. The more of these objectives you complete the more Merit Points you earn, which can then be used at the end of each level to purchase a wide range of equipment; ranging from medikits, revival syringes and grenades, through to new sidearms, tactical weapons and even modifications for each of those weapons.

However, it isn’t just the levels that are different each time you play – so too is the gear that is offered for purchase at the end of every level. Now, while this doesn’t necessarily seem like a big deal at first, it rapidly becomes one when you experience the bitter revelation that both your health and armor do not regenerate after each mission. Because of this, spending your Merit Points wisely becomes a matter of real concern, making RICO feel much more layered as a result.

The other sting in the tail here however, is that should you die at any point during the case, that entire case collapses and you have to begin afresh with a new case, with none of the gear that you previously bought being available to you. In the vein of some of the better roguelikes however, RICO doesn’t leave you hanging – instead, you get to keep various perks (called ‘traits’ here) that you’ve unlocked from your previous case, such as extra health, increased accuracy and more. Because of this, RICO does a cracking job of making you want to leap straight back in.

RICO is simply great in multiplayer

Beyond the core Case Mode, RICO also provides a Quick Play mode for players who fancy exactly what that mode describes, while Daily mode puts players up against randomised objectives and enemies, with equally randomised load-outs at their disposal as they seek to carve out their place on a persistent, online leaderboard. Again, these two bite-size modes very much reinforce the maxim that RICO is easy to pick up, and that its brisk scenarios which are rich with refined gunplay, are instead much harder to put down.

Then of course there’s the multiplayer. Arguably, this is where RICO does its best work as tackling the game’s numerous modes with a friend, either locally or online, proves to be a true hoot as the pair of you mark targets, create tactical choke points to stymie enemy reinforcements and even double the amount of slo-mo time if you both breach the same set of doors at once. In short, RICO might just be one of my new favourite co-op titles and obviously you can never have too many split-screen games on PS4.

Though highly enjoyable some issues abound

Though RICO is a conceptually very lean, easy-to-play affair then, it could certainly do with a widening of its ambitions. The level design is, for the most part, extremely conservative and lacking in notable features as flat levels are seemingly stacked one on top the other over and over. Likewise, it would also be nice for additional objective types and modes to be included – though this is always something that could be addressed by future DLC.

Then there is the technical side of things. Despite not being technically very sophisticated when compared to other shooters, RICO’s framerate never manages to go above 30 frames per second, and even takes a dive at various points when the action gets heavy during the slow-motion sequences.

Additionally, there are also issues with objects in the environment drawing in late, all of which adds up to a less than favourable visual impression on a console which is historically capable of so much more. Here’s hoping a performance focussed patch can address this in the near future.

Despite such flaws, RICO still manages to land reassuringly on target as a shooter for genre newbies and veterans alike who do not have the time for hours long play sessions. With its easy to grasp premise, deftly satisfying door busting, face-shooting shenanigans, some clever roguelike design and a whole bunch of supremely enjoyable multiplayer co-operative play, RICO stands as an effortless recommendation for shooter fans everywhere.

Published by Rising Star Games and developed by Ground Shatter, RICO is available now on PS4, PC, Xbox One and Nintendo Switch.

A fiendishly compelling re-imagining of the gun-toting cop shows of yore, RICO is an effortlessly playable, highly enjoyable and deceptively clever roguelike FPS that is at it's very best when enjoyed with friends.