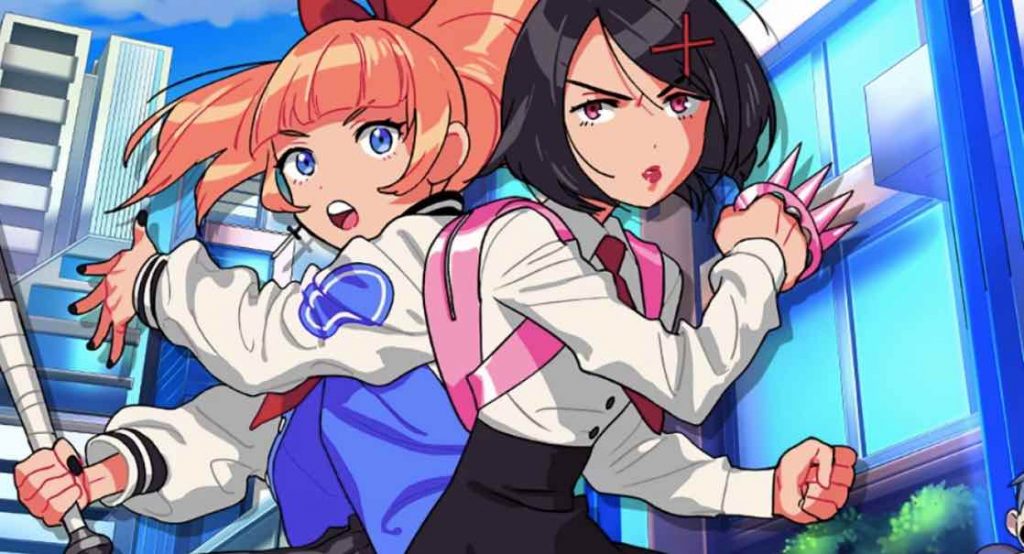 Affecting something close to a legendary status over in its native stomping grounds of Japan, the Kunio-kun series has garnered a well-earned and rabid fanbase who adore the series larger than life, big-skulled characters and the side-scrolling scraps that they find themselves drawn into.

A tandem effort from nu-retro developer WayForward and brawling specialists Arc System Works, River City Girls feels as much a continuation of the River City series as it does a sequel to the sadly now unavailable Scott Pilgrim Vs The World tie-in that WayForward developed back in 2012 for last gen consoles. Which is to say that River City Girls is really rather good indeed. Very good, in fact.

River City Girls Is A Ridiculously Good Side Scrolling Brawler

Turning the typical narrative premise that the Kunio-kun games and their genre stablemates, such as Final Fight and Double Dragon have embraced for decades onto their collective heads, River City Girls puts players in control of Kyoko and Misako; two tough highschoolers who must rescue their boyfriends (Kunio-Kun regulars Kunio and Riki) from the clutches of a vicious gang.

Matching the adjustment to its new female leads is the overall tone of the game, too. With an absolutely bop-worthy rock soundtrack, a full bodied embrace of high school satire (an early instructional video about puberty is especially amusing), and two highly engaging, entertainingly voiced leads with Kyoko being a charmingly happy go lucky type and Misako being the complete opposite, River City Girls proves to be an effortlessly likable prospect long before you’ve even thrown your first punch.

And by the time you do throw that first punch, it soon becomes clear, wonderfully clear, that developer WayForward absolutely *gets* what makes high calibre side-scrolling fighters tick the way they do. For a start, every punch, kick, knee strike, elbow strike, headbutt and German Suplex looks, sounds and feels absolutely bone crunching, possessing enough requisite impact to give you chills each time one connects.

Of course this being a dyed in the wool side-scrolling brawler, there are plenty of other ways to lay waste to the various thugs, gang members and grumpy high schoolers of River City. Baseball bats, park benches, baseballs, soccer balls, trash cans, yo-yos and much more besides can all be used to smack down your foes while, amusingly, our twin protagonists are also able to throw enemies into one another too, creating a delightful chain reaction of falling, broken bodies in the process.

The enemies that you’ll tangle with as you brutalize your way across River City are equally up to the task. Even the bog standard mobs that you’ll run into in River City Girls can prove challenging on their own, able to perform a range of devastating attacks, combo interruptions and underhanded tricks such as kicking dust up into your in order to stun you.

The bosses meanwhile follow that tried and trusted side-scrolling formula of being hard as nails, but not discouragingly so, as their screen-filling attacks and ostentatious presence soon gives way to attack patterns that you can exploit to your advantage and eventual victory.

River City Girls Is Much Deeper Than Your Average Face Smasher

Though it might not seem it on initial inspection, River City Girls actually has a lot more going on than just punching people in the face until they stop moving. From the off, one thing that is especially clear is that River City Girls is pretty far, structurally speaking, from the rigidly linear template that defines such efforts in the genre like Streets of Rage and Golden Axe.

Instead, players are free to wander around the classrooms, streets, malls and back alleys of River City however they like, with a range of quests and side-quests requiring you to retrace your steps back through previous areas to gain access to previously unreachable parts of the city. In practice, this embrace of a non-linear structure turns out to be something of a doubled edged sword.

On the one hand, being able to take on quests (of which many are of the ‘fetch’ variety) and explore the game world at large makes River City Girls feel much larger in spectacle, sweep and scope than its genre brethren. The other side of that argument is that you do spend a lot of time retracing your steps which can seem tedious early on – though WayForward manage to alleviate that in large part by forcing you to tangle with enemies on your return journey and also by providing you with a bus that acts as a fast travel to other, more far-flung areas in the game.

Beating up your enemies is more than just about clearing a path. For every enemy vanquished you gain a measure of XP and cash. The former is used to level up Kyoko and Misako, refreshing their health and providing new moves for them to use, while the latter can be used at any of River City’s shops or dojos to buy stat enhancing snacks, health replenishing meals or brand new moves to add your repertoire (assuming you’re high enough level to actually perform them).

There are also a range of accessories that can be collected and earned through completing side quests and beating bosses, with each trinket providing a special stat or ability boost such as providing extra damage when fighting female enemies, or an uptick in the regeneration of health for each foe vanquished. In this way, River City Girls can start to feel akin to a loot action title as much as it does a brawler, a fact that works in its favor not least because it lends the game a real sense of substance and an incentive for players to keep on playing.

Brilliantly, a nice little feature has Kyoko and Misako being able to ‘recruit’ critically damaged foes who can be whisked back into the fight at a quick press of the shoulder button to unleash an attack, before a cooldown period kicks in. Though hardly a major, groundbreaking addition to the formula, being able to call in some support, if even for a few seconds, really helps when the screen becomes filled with challenging enemies hellbent on putting your face into the pavement ASAP. A nice little touch is that each subjugated enemy has different attacks, abilities and backgrounds too; providing an additional incentive to catch em’ all, if you will.

Elsewhere, Sabu statues, effigies of River City’s resident crime boss, act as the game’s collectibles of sorts and are dotted around the game world, just waiting to be smashed with a reward being dished out to players who manage to find and destroy them all. River City Girls then is an uncommonly, valued stuffed proposition considering the genre that it sits in.

And then there is the audiovisual presentation of the thing. River City Girls simply looks and sounds glorious, with beautifully animated retro sprites that are generously endowed with a range of endearing flourishes (honestly you haven’t *lived* until you see the Super Dab attack), great voice acting and the absolute best soundtrack this side of Streets of Rage.

From a surprisingly sizable, non-linear campaign, to a range of upgrades, collectibles and an ever-brilliant co-op two-player mode, River City Girls is nothing less than essential if you like walking right on a screen and hitting things in the face. And even if you don’t, buy it anyway. Streets of Rage 4 you say? Who?

River City Girls is out now on PS4, Xbox One, PC and Nintendo Switch.

A smashingly great side-scrolling battler that is overflowing with charm, stuff to do and faces to wreck, River City Girls is utterly essential for fans of the genre.